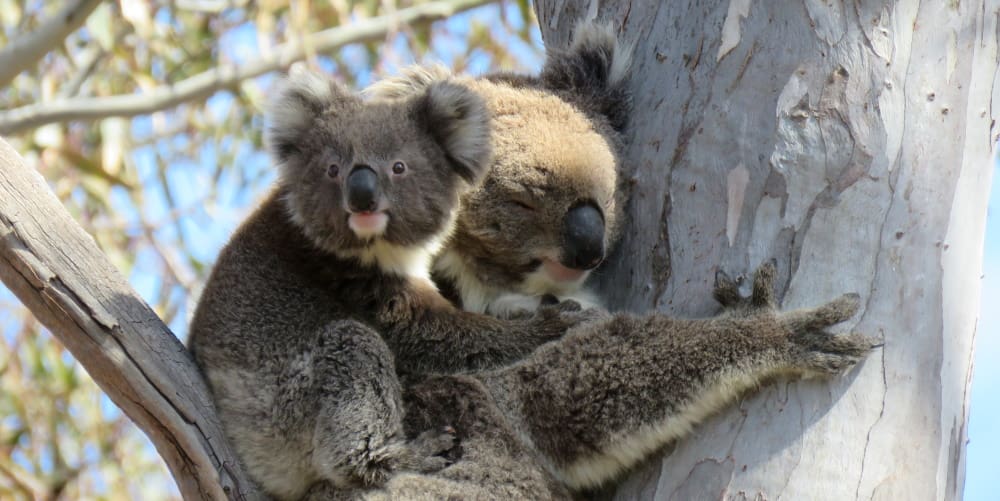 Long-term koala Phascolarctos cinererus population research in Victoria is rare, especially in the grassy woodlands away from the coast. The You Yangs Regional Park, just west of Melbourne, is home to a koala population in a dry woodland, and has been monitored by citizen scientists since 2006. This ongoing study aims to assess the population status, establish tree species use, note threats and guide action to mitigate those threats. We found that the population is stable in one zone, continuing to decline in another. All tree species in the region, including non-indigenous species, were used by koalas, and River Red Gum Eucalyptus camaldulensis remained the most preferred. Existing threats of climate change, drought and increasing aridity remained, plus a new threat emerged in 2018: eucalyptus dieback due to insect attack and drought. That threat was relieved by good rains in late 2018/early 2019 but serves as a warning. Our research concludes that the koala population of the You Yangs in 2018 was vulnerable, and targeted tree planting in corridors leading out from the You Yangs to waterways and fertile land may improve their chances of long-term survival.

All koala research is conducted non-intrusively using our Koala Nose Pattern Identification method – ie. no koalas are touched or handled, all observations are taken through binoculars and cameras at a distance of 10 metres away. All monitoring is conducted with Parks Victoria knowledge and approval. 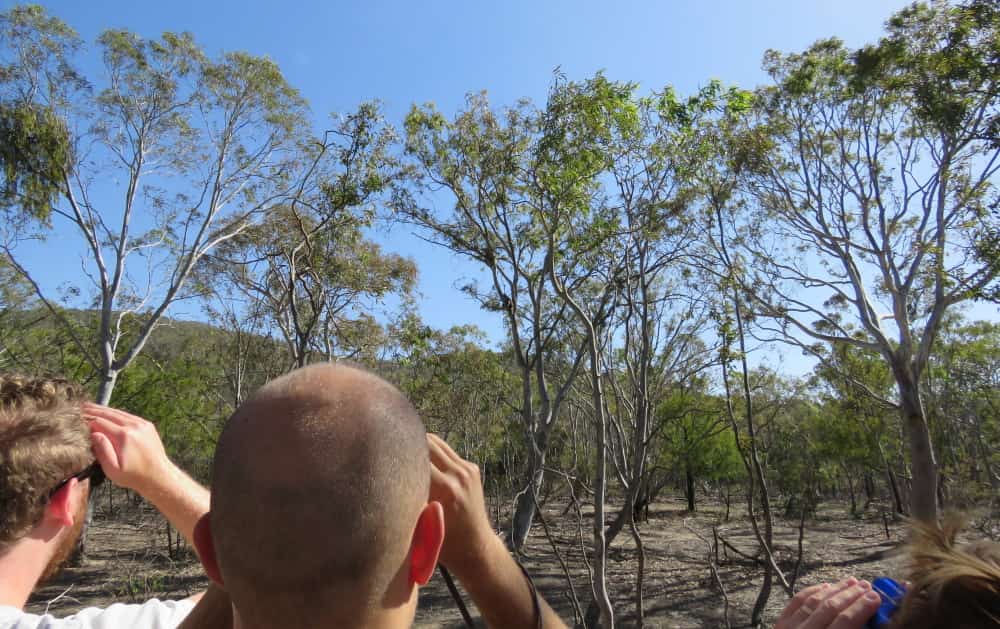 Monitoring a koala from a distance

Area monitored: approximately 28% of the 2000 hectare You Yangs Regional Park is regularly searched, on foot, by our researchers. Koala Researchers cover similar ground each day, but not exactly the same, and do as much as they can in approximately 5 hours. Research effort is concentrated on areas that produce the most koala sightings.

Area 1 is 157 hectares in size. The area is dominated by River Red Gum & Yellow Gum, with some plantations of Ironbark, Blue Gum and Sugar Gum, and scattered Swamp Yate, Brown Mallet, Red Box and Cherry Ballart. Area 1 included one permanent waterhole which has contained water since 2006. Three smaller waterholes were dry. 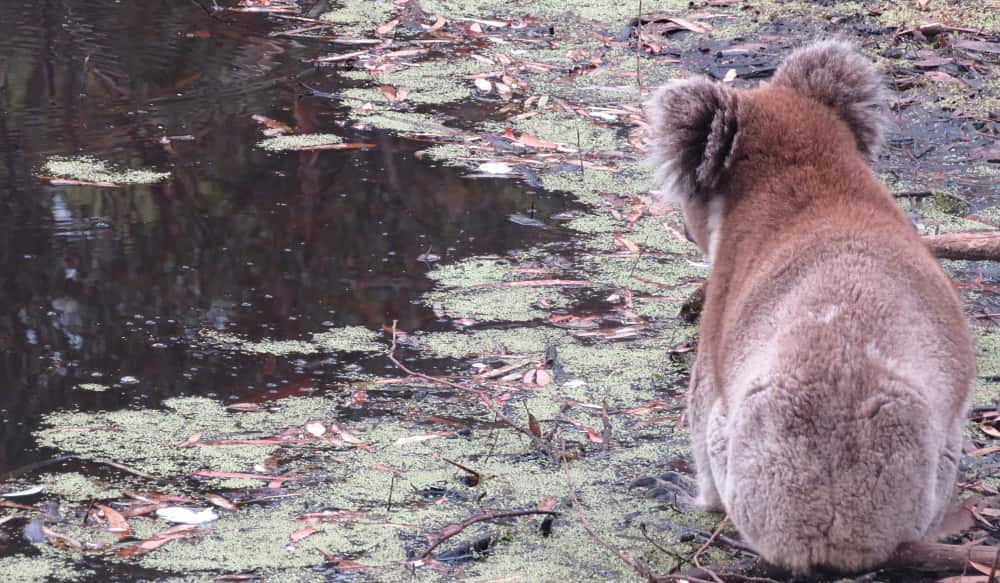 Area 2 is 223 hectares in size. The area is dominated by Yellow Gum & River Red Gum, with large areas of Red Box, Sugar Gum, Swamp Yate and Brown Mallet, some scattered Ironbark, Yellow & Grey Box and Cherry Ballart. Area 2 included seven waterholes, all except one were dry after February 2018, and that one only lasted a few months. Two other started to fill in December 2018.

Koala counts: we count each koala seen each day. Subsequent observations of the same koala on the same day are logged, but not counted as a second sighting.

Assessing koala population status: Population size is based on recognition of individual koalas resident in our research areas. Koala individuals are recognised by their nose patterns (natural markings in the nostrils) – a method we developed from 1998 to 2018. Read more here.

Koala identification is recorded in the field by the researcher or guide and several photographs are taken. Confirmation is made based on the photographs by the author Janine Duffy, the most experienced observer. GPS locations are also taken. 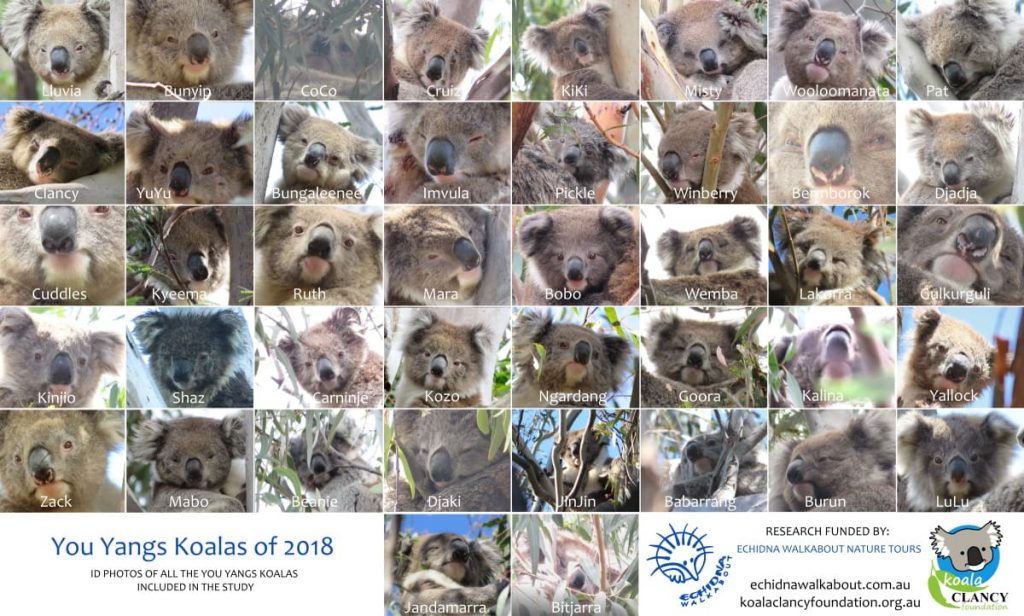 All the wild koalas included in the research for 2018.

Individual koalas are included in the record if they are known, named & registered, or if unnamed, if they are seen and positively identified at least twice over the course of our research. We consider that if an unknown koala is seen only once, that they are not a resident and cannot be counted reliably. If a koala’s identifying characteristics are not photographed and recorded they remain as an unknown, and are not included in the population count. Any data that was confirmed, eg tree species, sex of animal, whether a joey was present, is included in the data.

Establishing tree species use: The tree species a koala is roosting in is noted for each observation, and several photographs are taken. Confirmation is made based on the photographs by the author Janine Duffy. 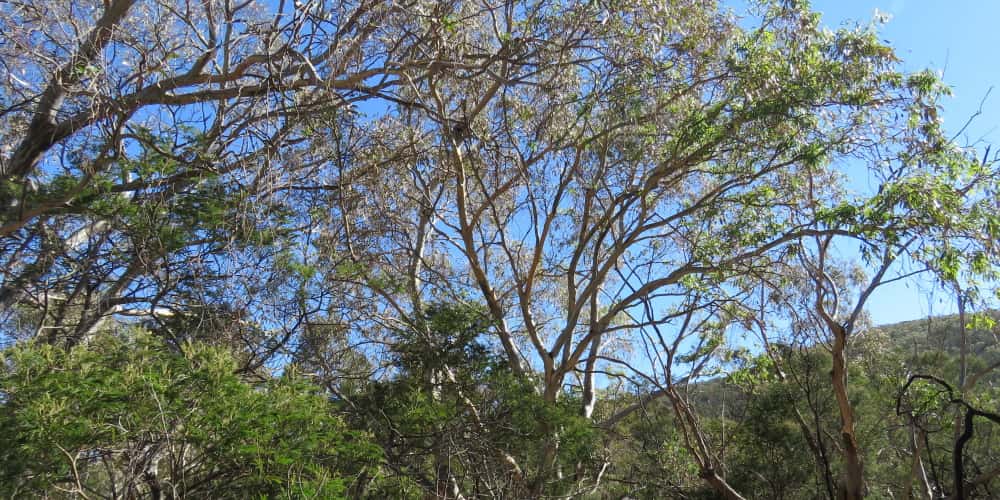 Analysis of threats: General condition of trees, forest structure and presence of free-standing water is recorded. Weather conditions are recorded each day.

Free-standing water availability: In Area 1, three of the smaller waterholes were dry, or dried out during 2018. One large waterhole retained water throughout (this one has never dried out since records began in 2006).

In Area 2, all 7 waterholes were dried out or were dry for most of the year. One very small one filled in May and held water for a short time, then filled again in December 2018. Another more substantial waterhole started to fill at the same time. But the two largest waterholes were dry or nearly dry after March.

Proximity to free-standing water is known to be important for koalas to counteract heat stress. Davies (2013) (1)

Area 1 has been monitored since 2006, and koala numbers there continue to decline significantly. Only 13 individuals were identified in that zone, down from 16 in 2017 and 18 in 2016. There were no births there, but no deaths recorded either. Breeding females in that area had reduced to 5 (and most of those are old koalas).

The highest numbers of Koalas are sighted during breeding season: October to April. December had the highest average: 5.77 koalas seen per day, followed by November: 5.19; January 4.89; February: 4.59; March: 4.39. 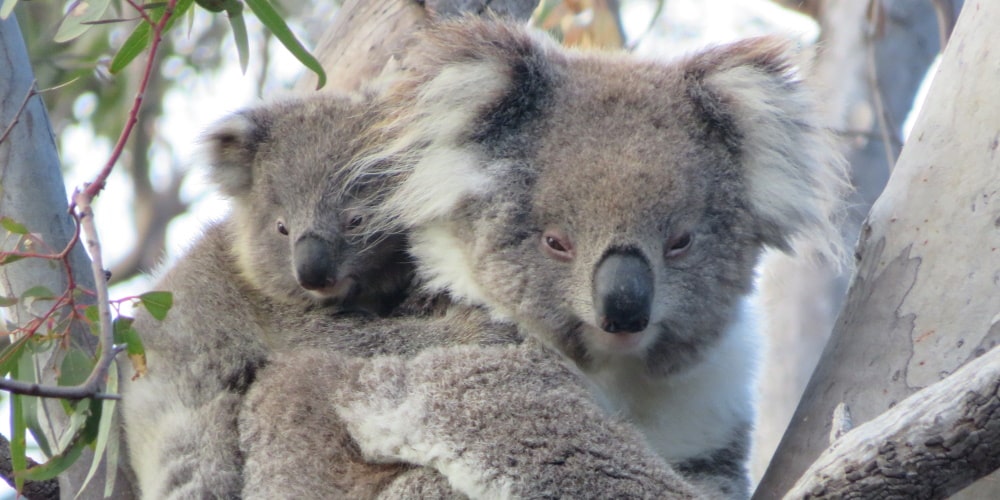 River Red Gum Eucalyptus camaldulensis remained the favourite tree species for koalas in 2018, accounting for over one-third, 36%, of all observations.

Yellow Gum E. leucoxylon use returned to 17%, similar to 2016, after a high of 23% in 2017. Yellow Gums are possibly the most numerous tree species in the Park.

Blue Gum usage increased a little, 11%, up from 7.5% in 2017. Though Blue Gums live naturally in the Park, most of the native species E. pseudoglobulus are high on hills where koalas are seldom found. There are a few Blue Gums in our research areas, some from planted species E. globulus, some E. pseudoglobulus, and all are popular.

Eucalyptus dieback: An outbreak of eucalypt dieback due to Leafblister Sawfly Phylacteophaga froggatti occurred on the River Red Gums throughout Area 2 in all months from February to December 2018. Almost every mature leaf on most trees were affected. Leafblister Sawfly can cause substantial loss of leaf area, and even death of small trees. 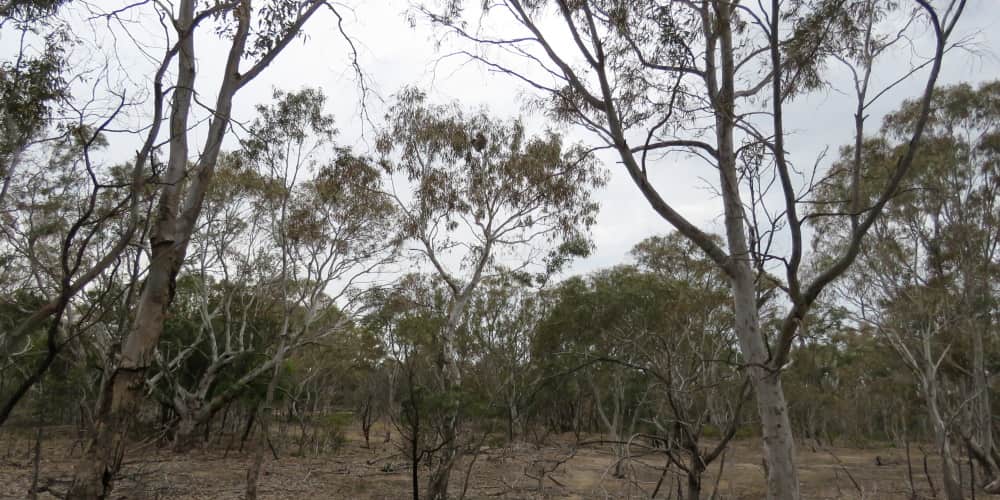 In addition, many River Red Gums lost much of their foliage. Whether this was a response to the sawfly, or drought, is not known, but on some trees with thin canopies there was no sign of the sawfly on the remaining leaves. 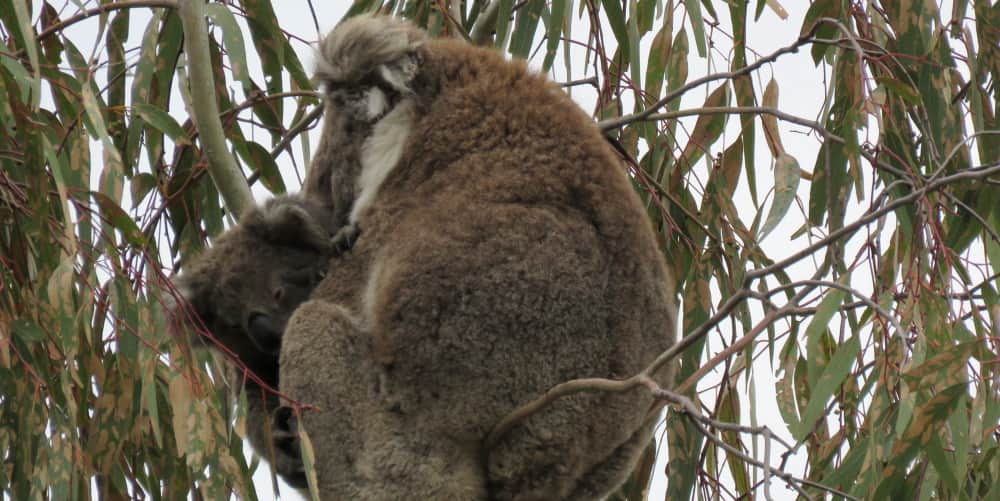 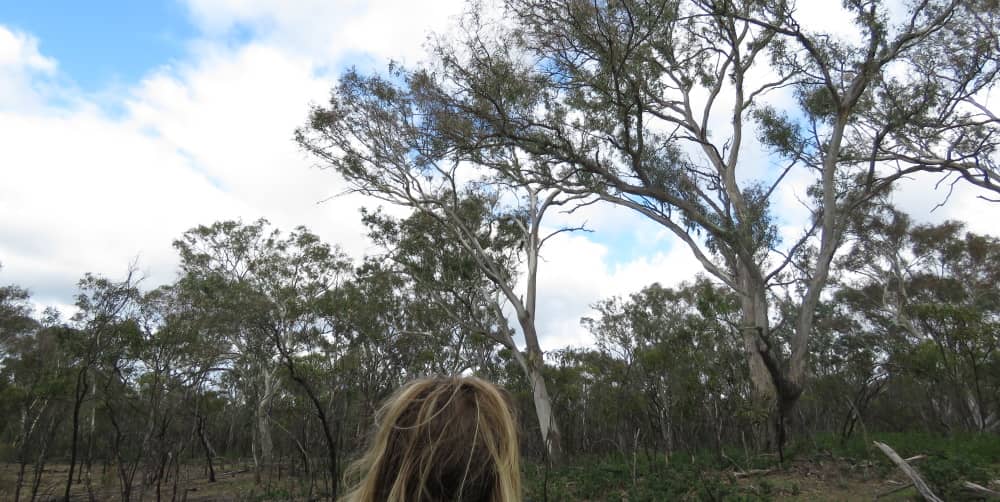 Stressed River Red Gums with new growth in May 2018

One of the koalas, Mara, that died in early 2019 lived in the area most affected by the dieback.

Climate change: The climate was harsh, very dry and hot with above average temperatures and below average rainfall. November had 4 days over 30 C, December had 7 days over 30 and one over 41 C.

Boneseed: Boneseed Chrysanthemoides monilifera weed in Area 2 has almost been removed as a threat, but must continue to be managed. By the end of 2018, most of the mature Boneseed plants had been removed – that’s over 1 million weeds removed by community volunteers & travellers co-ordinated by Echidna Walkabout and Koala Clancy Foundation.  New seedlings were appearing all the time though, and will quickly replace those removed.  Boneseed impedes koalas from using the habitat, possibly due to making the undergrowth impassable or threatening.

The wild koala population of the You Yangs was stable in 2018, but vulnerable. The continuing decline in Area 1 is of great concern. While there is slight growth in Area 2, the widespread eucalyptus dieback in that zone demonstrated how quickly that population could go into decline.

Action to prevent a population crash due to eucalypt dieback or leaf-fall is difficult. It is not known when or if a leafblister sawfly attack will occur again, or even what conditions caused this occurrence.  Drought can certainly cause leaf-fall as well.  In the Gordon (1988) study cited (2), koalas survived where the River Red Gum foliage survived – beside waterholes. Koala Clancy Foundation’s tree planting is concentrated on waterways and corridors linking them to the You Yangs. It is hoped that enough trees can be planted in the next few years to ensure that koalas have a way out in times of heat stress.

Additionally, if waterholes within the You Yangs Regional Park do dry out, artificial filling of these waterholes could save the trees nearby, thus saving koalas.  Other sources of water, possibly including koala water stations in trees, should be considered and placed in quality habitat areas known to be used by several koalas, but with no other water sources.  We can provide suggested sites.

Boneseed removal, especially in Area 2, seems to be having a positive effect on the koalas. We recommend that it continues, and is embraced and supported by the whole community.

Vehicle restrictions in the Park after dark, and low speed limits, seem to be working and should continue.  Increased heavy vehicle traffic on the roads around the You Yangs should be avoided.  Dog attack remains a concern, and is difficult to assess.  It appears that more dogs are being exercised in the Park every year, and from our observations, over half are off leash.  Dog owners that break the rules would never report a koala attack, and we would be unlikely to find the dead or injured koala.

All funding was provided by social enterprise wildlife tour operator Echidna Walkabout Nature Tours. Funding has been provided for this project since 2006 in the You Yangs, and from  1998 to 2006 in the Brisbane Ranges.

For more information about our methods, or to use any of our findings please contact us. janine@echidnawalkabout.com.au 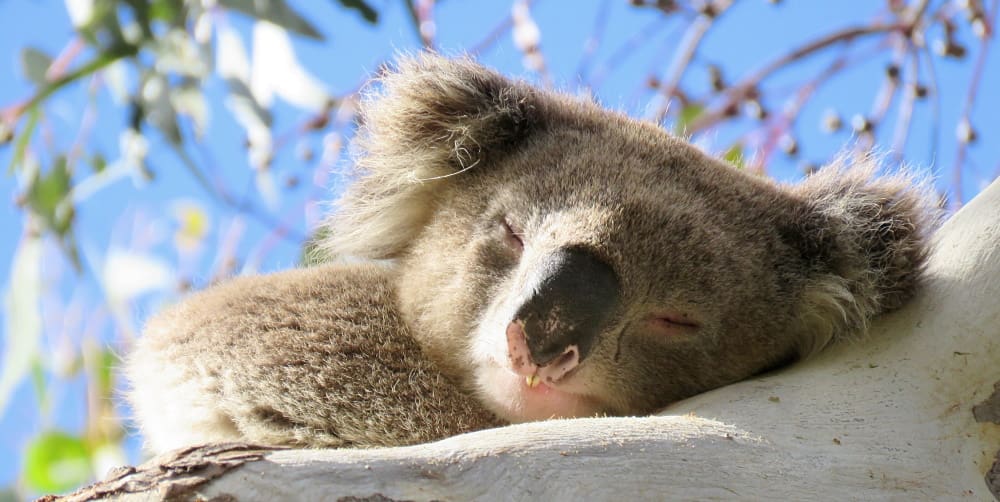 “Maintaining access to freestanding water, such as farm dams, and planting favoured tree species, particularly those that tend to have higher leaf moisture content, such as E. camadulensis ….), close to dams would also increase the availability of high quality trees, as these trees are likely to have higher leaf moisture levels. Therefore, to ensure the continued survival of western Queensland koala populations in extreme weather, the most important actions for koala conservation within these semi-arid landscapes are the maintenance of the quality and quantity of riparian habitats, expanding the availability and accessibility of freestanding water, such as around farm dams, and providing specific trees as food resources.”

“In the summer of 1979-80. there was a sharp decline in the koala population along Mungalalla Creek in south-western Queensland. The decline was associated with a heatwave and drought. Live animals and carcasses were counted soon after the decline and at three subsequent periods. It was estimated that more than 63% of the population died. The drought and heatwave caused extensive leaf-fall and/or browning of the foliage in food trees along stretches of dry creek. The proximate cause of death was thought to be a combination of malnutrition and dehydration.”