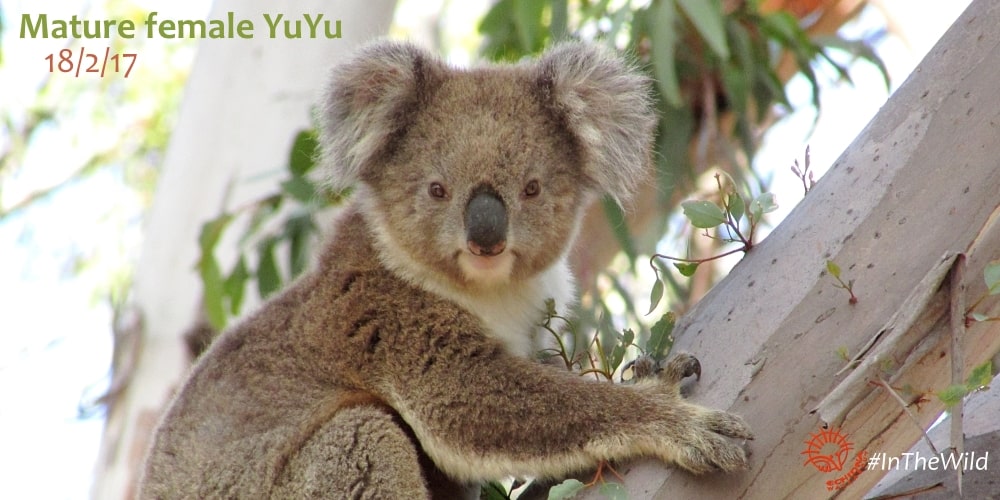 This is a summary of the 2017 year of Wild Koala Research. 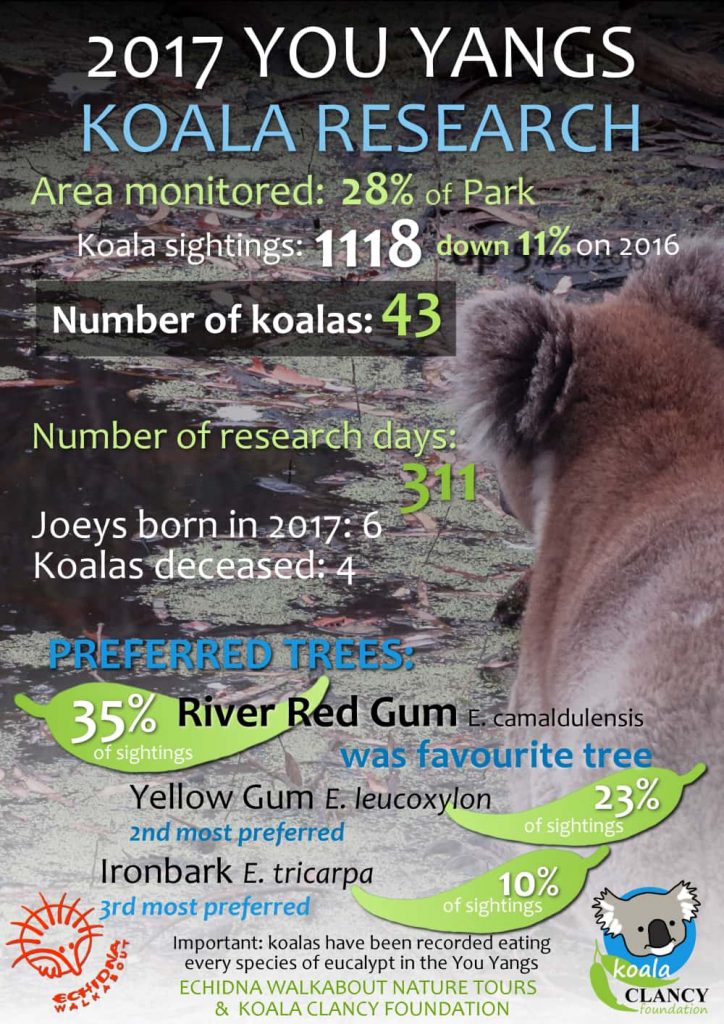 All koala research is conducted non-intrusively using our Koala Nose Pattern Identification method – ie. no koalas are touched or handled, all observations are taken through binoculars and cameras at a distance of 10 metres away.  All monitoring is conducted with Parks Victoria knowledge and approval.

Area monitored: approximately 28% of the 2000 hectare You Yangs Regional Park is regularly searched by our researchers.

Koala sightings: we count each koala seen each day. Subsequent observations of the same koala on the same day are logged, but not counted as a second sighting.

Number of research days: any day that a Koala Researcher or Wildlife Guide is in the You Yangs looking for koalas is counted as a research day.  There were no research days where 0 koalas were seen, but there were several where only 1 koala was seen.

You Yangs Wild Koala Population in 2017

Number of koalas: an individual koala is counted if they are known, named & registered, or if unknown & unnamed, if they are seen at least twice in that year.  We consider that if an unknown koala is seen only once, that they are not a resident and cannot be counted.  If a koala’s identifying characteristics are not photographed and recorded they are not registered.

Area 1 is 157 hectares in size. Area 1 included one permanent waterhole which contained water throughout 2016 and 2017. Several smaller waterholes were dry.

Area 2 is 223 hectares in size. Area 2 included one shallow large waterhole that contained water during 2017 and dried up in early 2018.

Koala joeys born: 6 is the equal highest number of joeys born in any year of our research.  This figure is quite reliable. If a known female has a joey we have six months to see it, so few joeys would be missed. It is not known why the birth rate is so much higher in Area 2 than Area 1, but it could be for the same reasons that the population is declining in Area 1 (see Table 4).

Koalas deceased: 4 known deaths doesn’t seem high, but they are all in Area 1.  In fact, that figure is probably higher – we often don’t find koalas after they die. 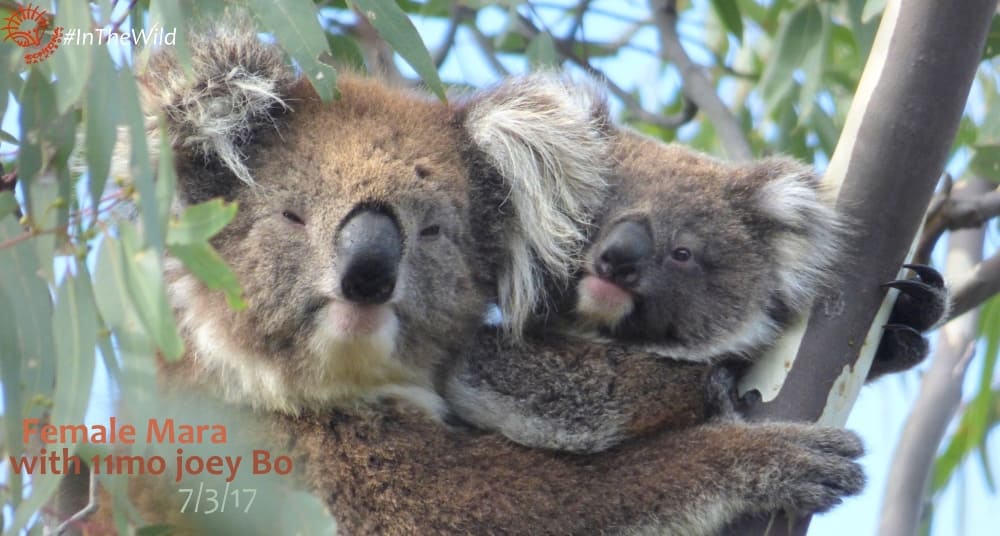 River Red Gum remained the favourite tree species for koalas in 2017, accounting for one-third of all observations.

Blue Gum usage dropped dramatically in 2017, cause unknown. It is important to note that the majority of Blue Gums in our research areas occur in two small regions of Area 1.

Yellow Gum use increased to 23% in 2017, cause unknown.  Yellow Gums are very numerous throughout the Park, and possibly Yellow Gums picked up some of the drop in Blue Gums.

It is interesting to note the consistently low preference for Manna Gum, but it should be noted that Manna Gum only occurs in a small region of Area 2.

You Yangs Wild Koala Population over a decade.

With a birth rate of 0.14, fecundity of only 0.33* and a (known) death rate of 0.09 the overall koala population in the You Yangs could appear to be stable at this point in time. But the trend over a decade is worrying – Area 1 has shown a 47% decline since 2007.  Also, the areas we monitor are where koalas are seen most frequently, and include the healthiest forest in the You Yangs – the other three-quarters of the Park is drier and more hostile.

Area 2 has shown a growth in population since 2010, bucking the trend shown elsewhere.  Two changes occurred here that could have had an affect:

Firstly, heavy rainfall filled large waterholes in late 2010. Water persisted in these until 2014.  Some smaller waterholes filled again in 2017.  We have noticed that koalas congregate towards free-standing water in hot weather and in droughts, and scientific research has found the same. (1) (2) This publication shows the importance of free-standing water for koalas.  This 2013 publication reaches the same conclusion. 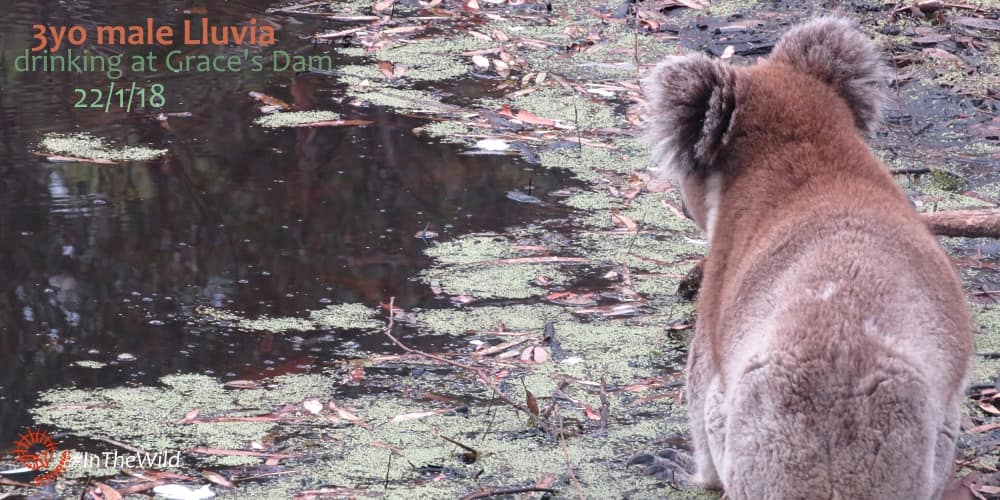 Secondly, our Make a Home For Koala Clancy Project started removing large amounts of invasive Boneseed Chrysanthemoides monilifera subsp. monilifera weed in Area 2 in 2011.  By 2017 the majority of the area had been cleared of the weed. We continue to remove around 450,000 weeds per year.

We cannot afford to be complacent, which is why we are taking action to plant koala habitat trees on private farmland around the You Yangs. Read about that project here.

The effect of climate

The effect of climate on koalas is well documented. (3) (4)  Dryness, droughts and heat waves kill koalas at high rates.

Climate had a huge effect on Area 1 in the Millenium Drought, (and probably Area 2) and drought conditions appear to be returning.  River Red Gum forest is in very poor condition throughout the Park.

Climate conditions for Victoria in 2017: http://www.bom.gov.au/climate/current/annual/vic/summary.shtml 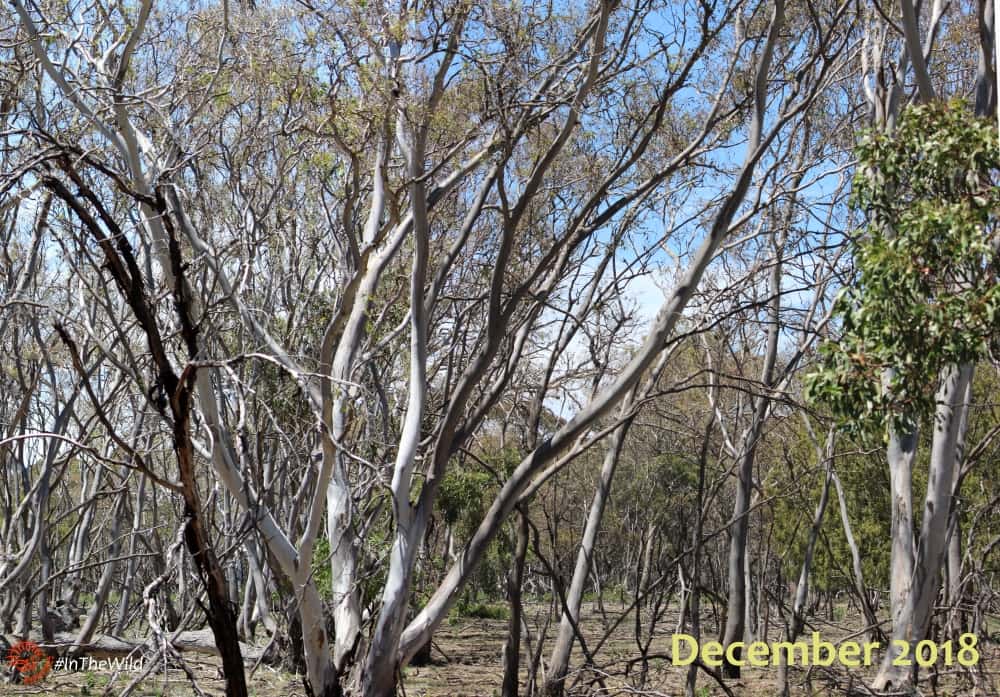 River Red Gum forest in the You Yangs, two weeks after rain.  New foliage growth is yellow-green in colour and constitutes most of the canopy. One month prior to this photo there was very little foliage in this forest. 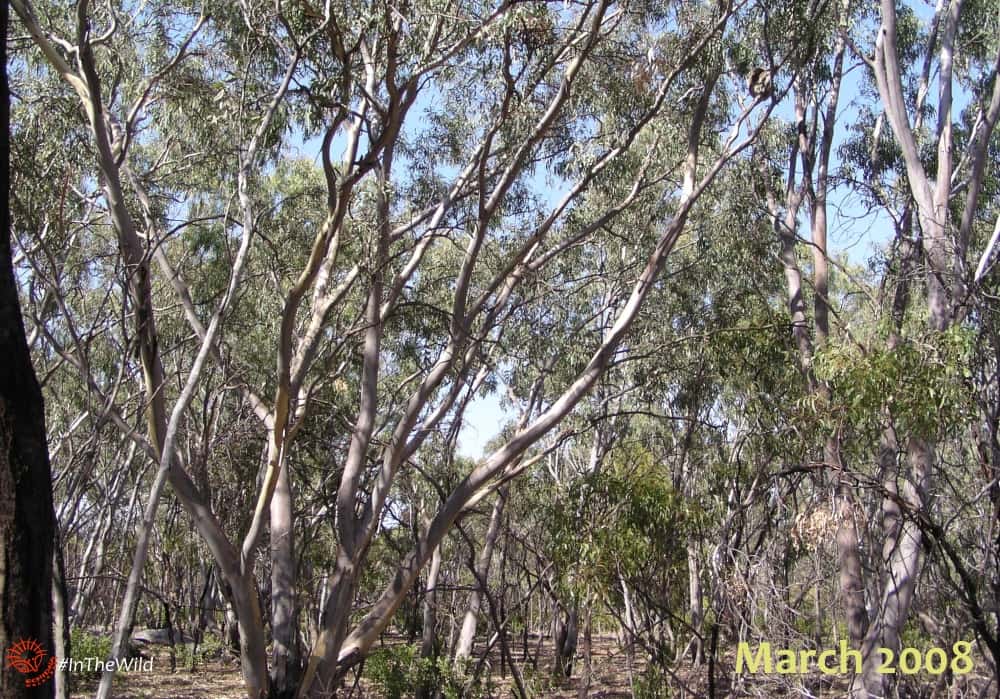 The same forest in March 2008, 12 years into the 14 year Millenium Drought.  One would assume that these trees were stressed in 2008 – so this is not a photo of this forest in a healthy state. 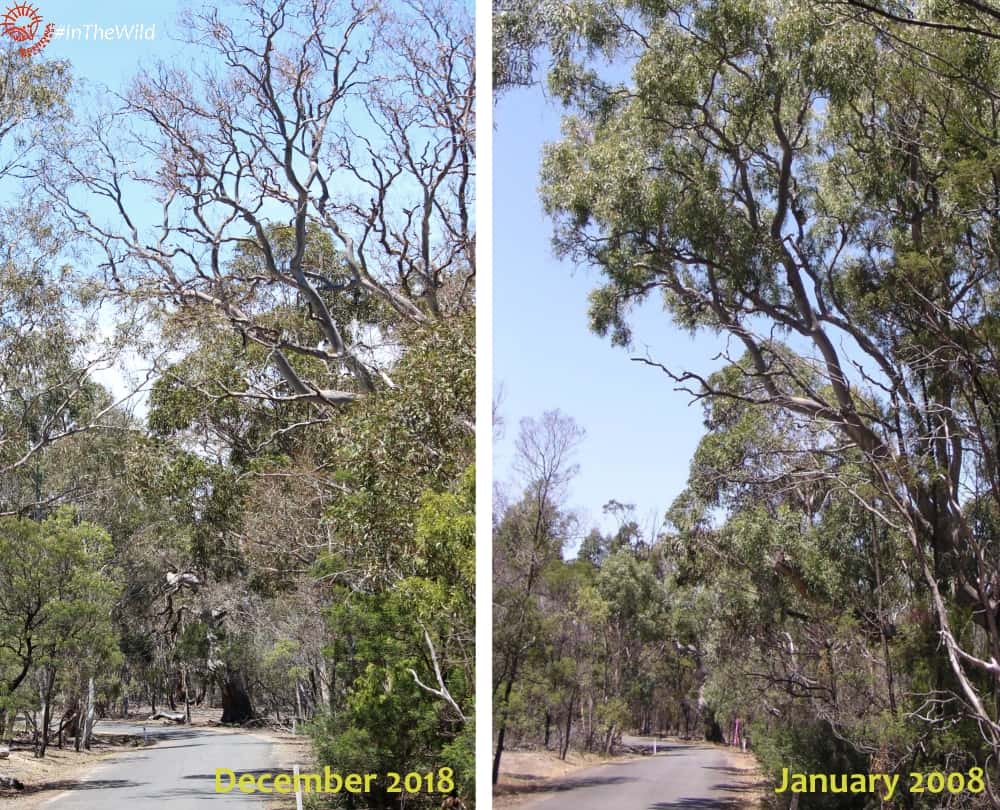 River Red Gum forest on Turntable Drive, showing a very old River Red Gum in the foreground – it has no foliage in December 2018.  In January 2008 the same large tree had thick healthy foliage. 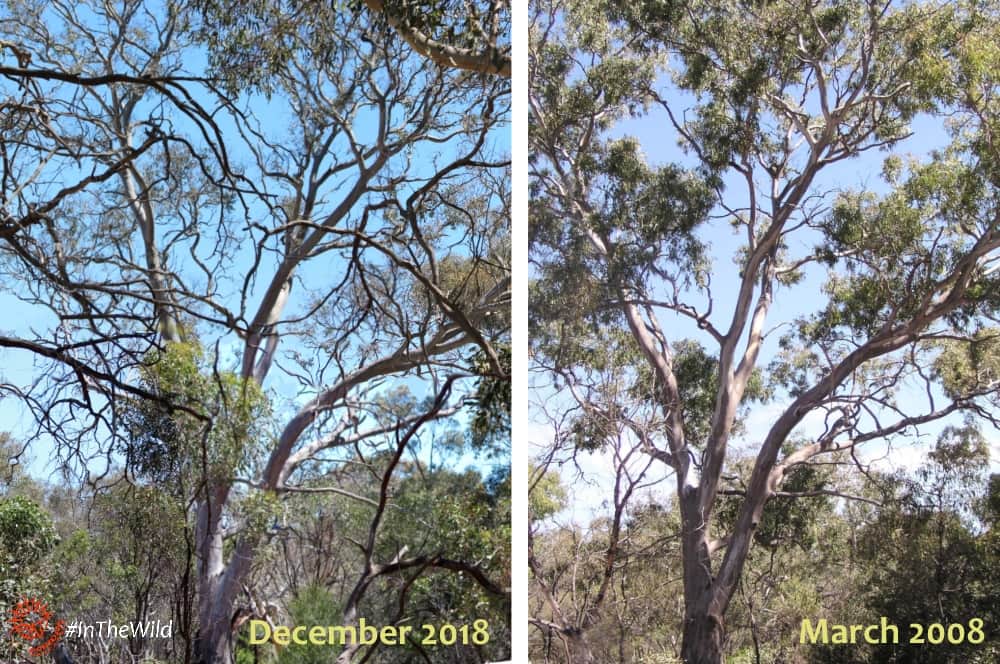 A typical large River Red Gum that is a known koala tree. In December 2018 it shows a loss of about 50% of canopy compared to March 2008.

These photographs show a snapshot of the forest condition in the You Yangs.  River Red Gums are critical to koalas, and comprise one-third of their diet.  The health of these forests is at risk, and the koala population with it.

The wild koala population of the You Yangs may be stable this year, but is highly vulnerable. The trees they rely on are in very poor condition, and the free-standing water they need in hot weather is unreliable and declining. With a small population, and a death rate close to the birth rate, any man-made causes of death to koalas could further harm the population.

We recommend artificially filling some or all of the waterholes around the You Yangs, both to preserve the River Red Gums living nearby and also to help koalas survive extreme weather events. We also recommend the continuation and support of all boneseed removal projects, and a serious committment to reducing the likelihood of dog attack and vehicle strike on koalas in the region.

This project is completed funded by social enterprise Echidna Walkabout Nature Tours and offered freely to land managers, conservationists and the public. For more information about our methods, or to use any of our findings please contact us. janine@echidnawalkabout.com.au

“Maintaining access to freestanding water, such as farm dams, and planting favoured tree species, particularly those that tend to have higher leaf moisture content, such as E. camadulensis ….), close to dams would also increase the availability of high quality trees, as these trees are likely to have higher leaf moisture levels. Therefore, to ensure the continued survival of western Queensland koala populations in extreme weather, the most important actions for koala conservation within these semi-arid landscapes are the maintenance of the quality and quantity of riparian habitats, expanding the availability and accessibility of freestanding water, such as around farm dams, and providing specific trees as food resources.”

“A study in drought and heatwave conditions in the mulgalands.. found that young koalas were more frequently found in sub-optimal habitat surrounding the creek, and thus experienced higher mortality than dominant individuals in habitat surrounding permanent water (Gordon et al. 1988). This suggests that in extremely hot and dry periods koalas in the mulgalands may be dependent on free-standing water, or on leaves from trees with good water supply or water-retention capabilities (sensu Melzer 1995).”

“The Arctic Fox, Leatherback Turtle and Koala are among the species destined to be hardest hit by climate change, according to a new IUCN review.”
Article link: https://www.iucn.org/content/species-climate-change-hit-list-named

“In the summer of 1979-80. there was a sharp decline in the koala population along Mungalalla Creek in south-western Queensland. The decline was associated with a heatwave and drought. Live animals and carcasses were counted soon after the decline and at three subsequent periods. It was estimated that more than 63% of the population died. The drought and heatwave caused extensive leaf-fall and/or browning of the foliage in food trees along stretches of dry creek. The proximate cause of death was thought to be a combination of malnutrition and  dehydration.”