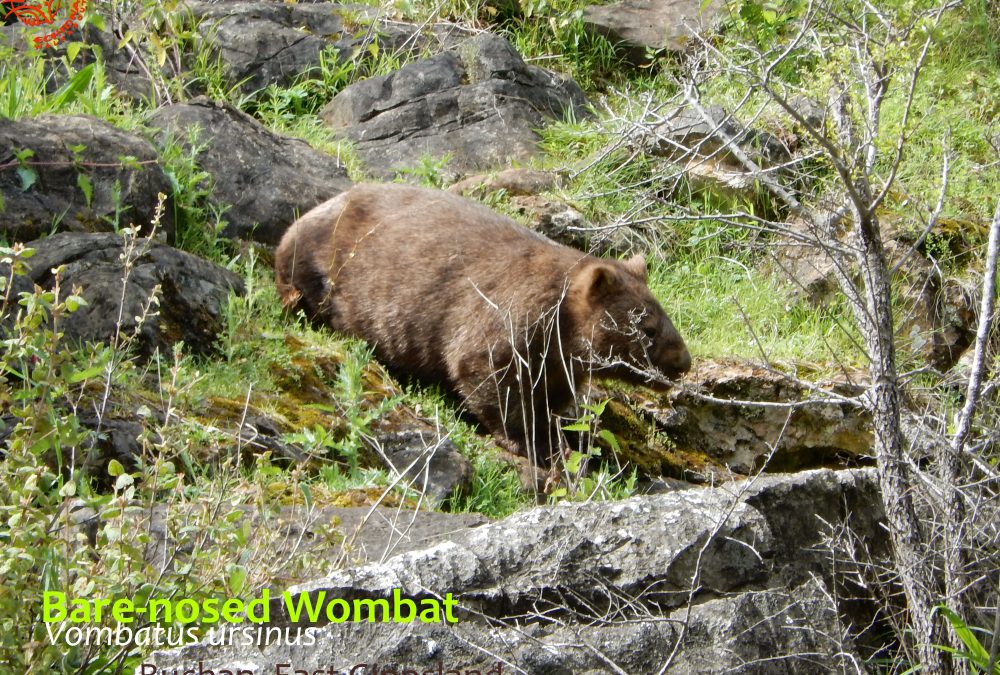 Wombats are impressive. Wombats are powerful. Wombats are highly intelligent. They are good-looking, yes, but cute is far too diminutive a word for Australia’s most powerful native.

One night at Cape Conran in far East Gippsland, Victoria, I travelled out alone in search of a satisfying method of watching wild wombats. Most wild wombat experiences are of the disappearing, and disappointing, bottom of a wombat. I was hoping to find a better way.

Wombats are plentiful at Cape Conran, but nervous of humans and difficult to see. The country is thickly wooded with coastal scrub, leaving the only possible wombat-viewing along the slashed roadside verge and in the grassy areas around the picnic ground. 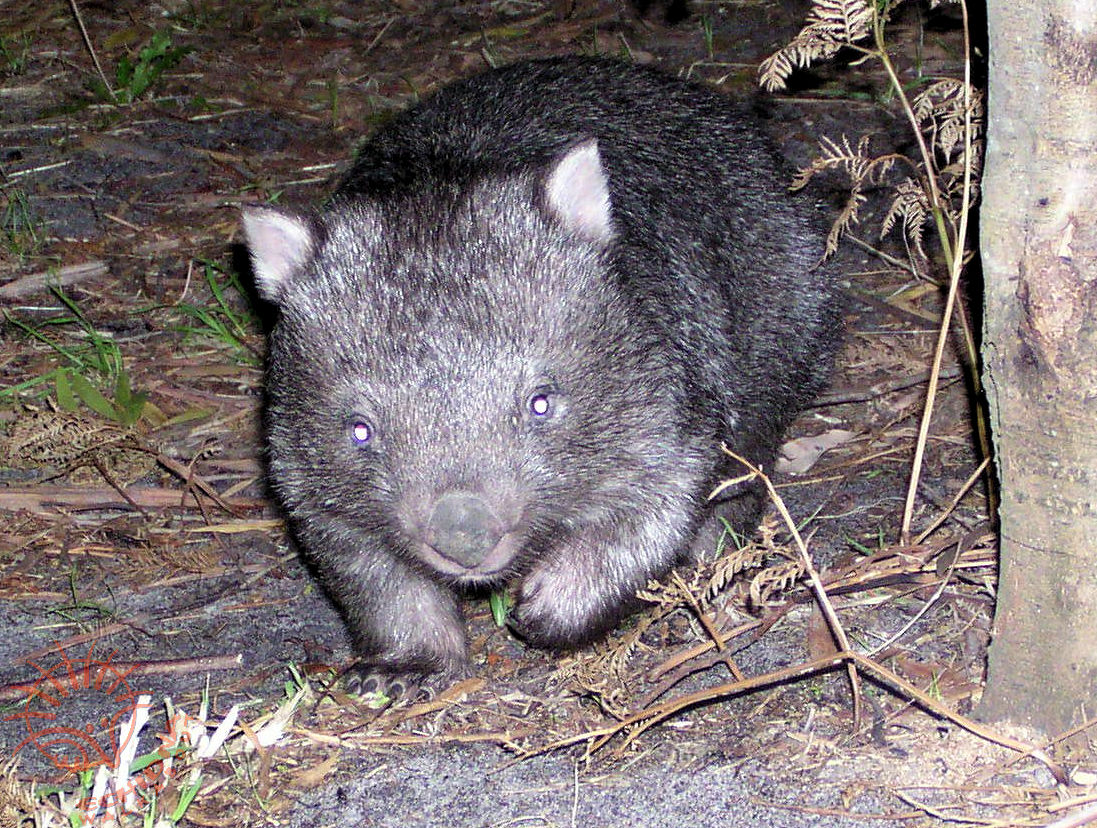 On previous research visits I had come to these conclusions:

On this night I rounded a corner to find a female Bare-nosed (Common) Wombat grazing ahead on the roadside. I stopped immediately, turned headlights down, but it wasn’t soon enough – she dashed into the bushes. Pity, she was such a big healthy girl, I would have loved to have spent some time with her. I was so disappointed that I just sat there for a minute in the cabin of the Landrover, wondering what on earth I was doing out here alone in the cold. 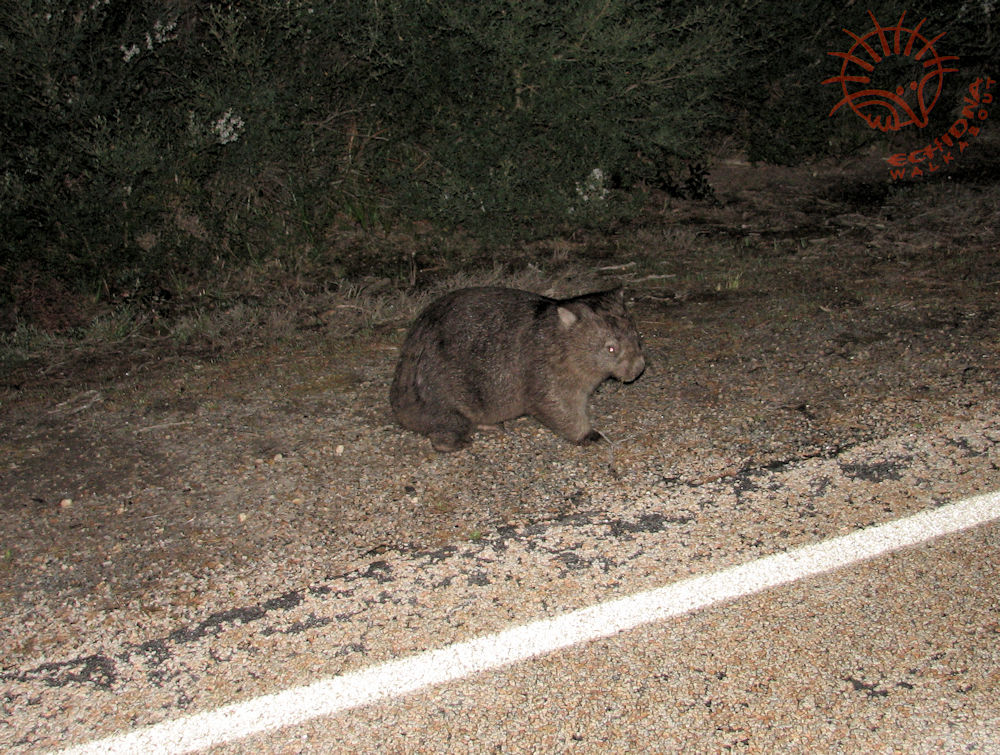 I noticed that the crashing sound wombats make in the undergrowth had stopped quite quickly. She hadn’t gone far. I couldn’t see her, but I wondered – is she just waiting for me to leave?

So I stayed and waited, freezing cold with the car windows open, but not willing to make a sound. It was ten minutes before she reappeared, hesitantly poking her intelligent eyes out of the bush. I didn’t move, for fear of ruining this beautiful moment.

Finally she emerged, her sleek chocolate brown body in full sight. I felt triumphant – it worked! For the next ten minutes I watched her while she grazed on the short grass by the road. 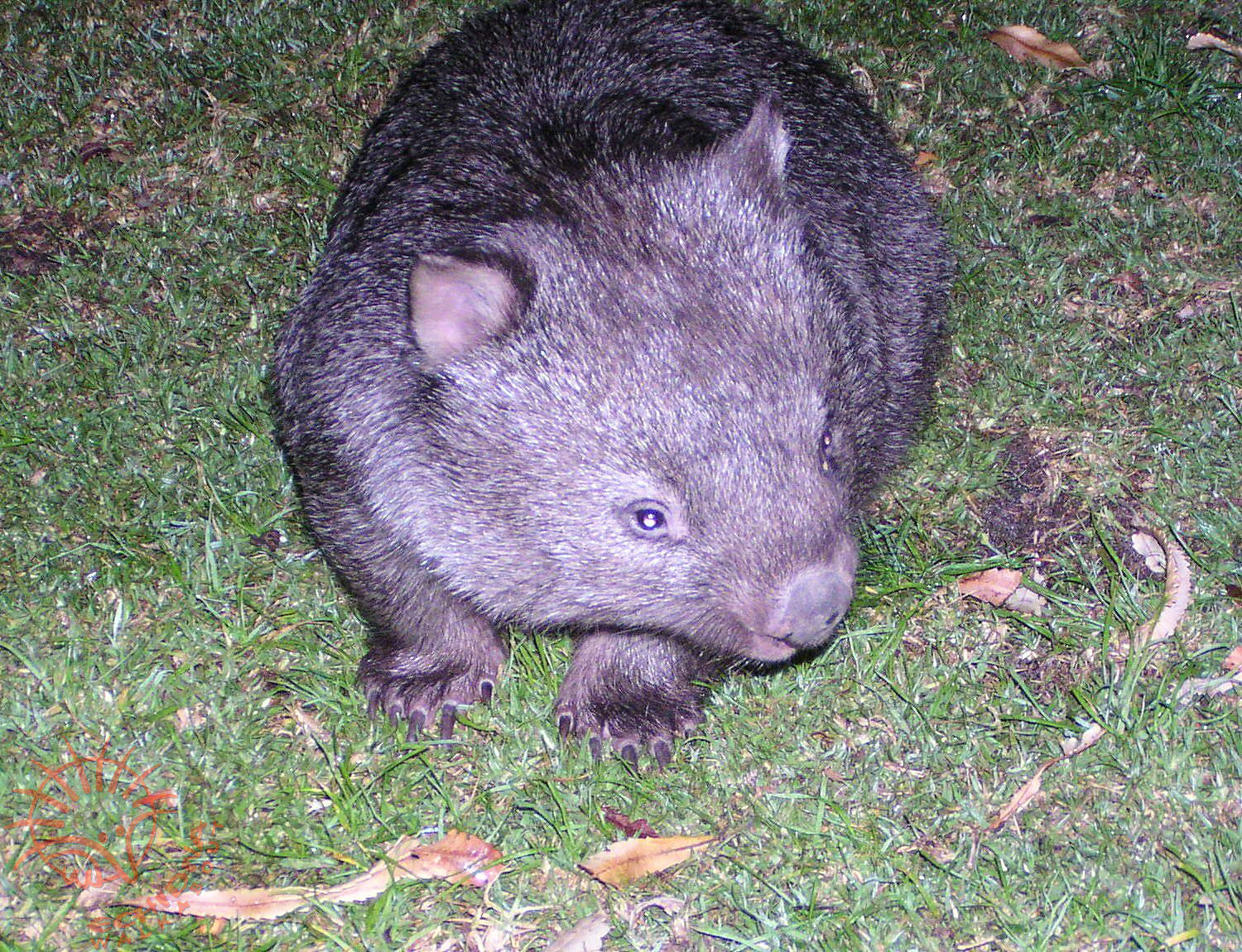 But this was a research trip, so I needed to find out if she had re-emerged because she accepted my presence, or if she simply didn’t realise I was still there. So I cleared my throat, softly. She dashed into the scrub. Damn! But then she stopped, head in the bushes, body still exposed. She waited. I waited. She turned around and returned to her grassy verge. Woo hoo!

Now I was really curious. Had she partly accepted me, on the condition that I behave; or does the level of noise/disturbance govern her reaction?

After a few more minutes I cleared my throat again. She stopped grazing for a moment, looked in my direction, but then resumed her feast. A few minutes later I did it again, louder. This time no reaction. Now I knew the answer to my question: She knew I was there and had accepted it.

Over the next half hour she grazed, I watched, making as much noise as I liked – coughing, talking to her softly, moving around in my seat, eating. I wasn’t rowdy, but I was making the sort of noises that groups of people can’t help making. And she was fine with it.

Eventually I had to leave – we humans have trouble staying awake in the full dark! By this time she was so accustomed to me that even the horrendously loud starting of the Landrover engine wasn’t enough to rouse her.

To experience wombats in the wild you need to travel to south-eastern Australia. The cool forests of Victoria (east of Melbourne) and New South Wales (in the hills west of Sydney) are home to wombats, but they are best (only?) seen on cool nights. Tasmania is by far the best place to see them – the cooler temperatures year round allow for wombat viewing even in the daytime.

Our 4 day Wildlife Journey to far East Gippsland is great for wombat viewing in the cooler months of September, October, November, April and May. In fact, it was research for this tour that gave me this experience.

Wombats are known to be the most intelligent of marsupials. They are also very large when full grown – up to one metre in length and 40kg in weight. Few native creatures are strong enough to challenge them, only humans are a real threat, so wombats have become the elephants of Australia: authoritative, stubborn, dignified. They move away from us only because they hate fuss. They’re not scared of us, they just don’t like our noisy, intrusive blundering.

Can you see why I can’t see a wombat as simply ‘cute’?