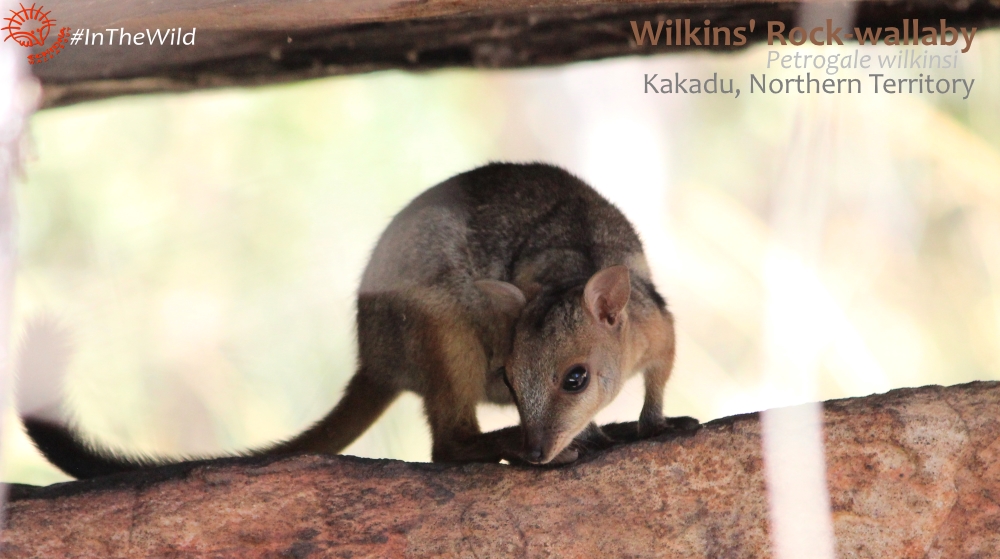 Ubirr Rock Art Site in Kakadu National Park is an excellent site to see beautiful little Wilkins’ Rock-wallabies (Petrogale wilkinsi). They have become accustomed to seeing people walk by all day, so the wallabies go about their business without fear. Of course, most of the people that walk by don’t see the wallabies in their shady overhangs. 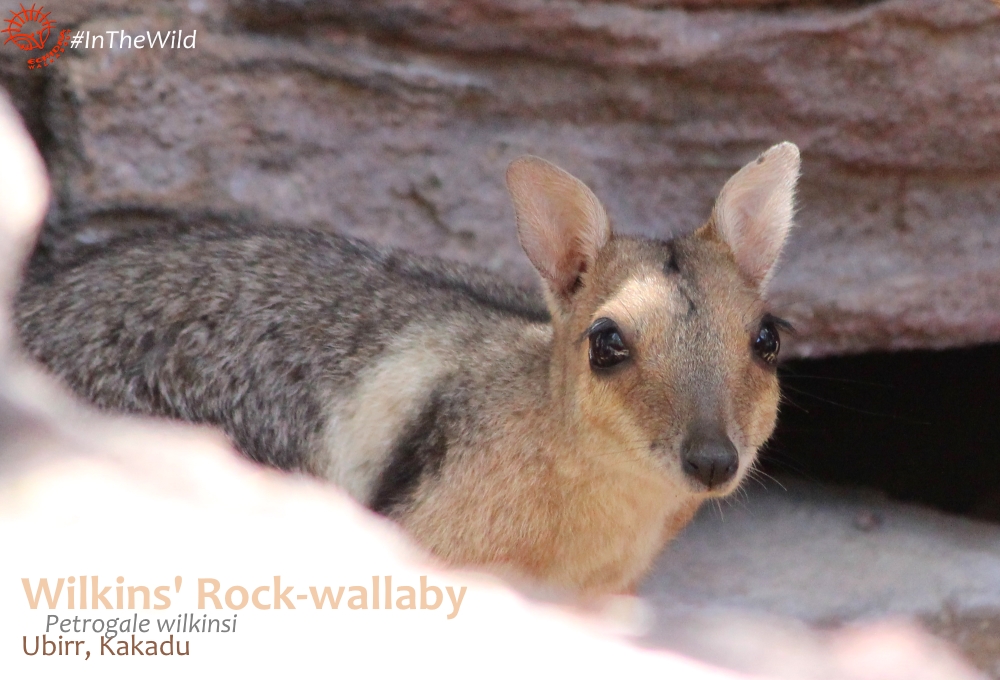 In the middle of the day in the dry season, Wilkins’ Rock-wallabies appear to socialise and feed in the shade of rock overhangs and in crevices between rocks. Watch:

We have watched them mating under a rock overhang (see video above). On a recent trip we saw 5 rock-wallabies in and around one rock overhang. There was lots of interaction between the individuals. Studies show that males do not share den sites, so the group must have been mostly females and young. 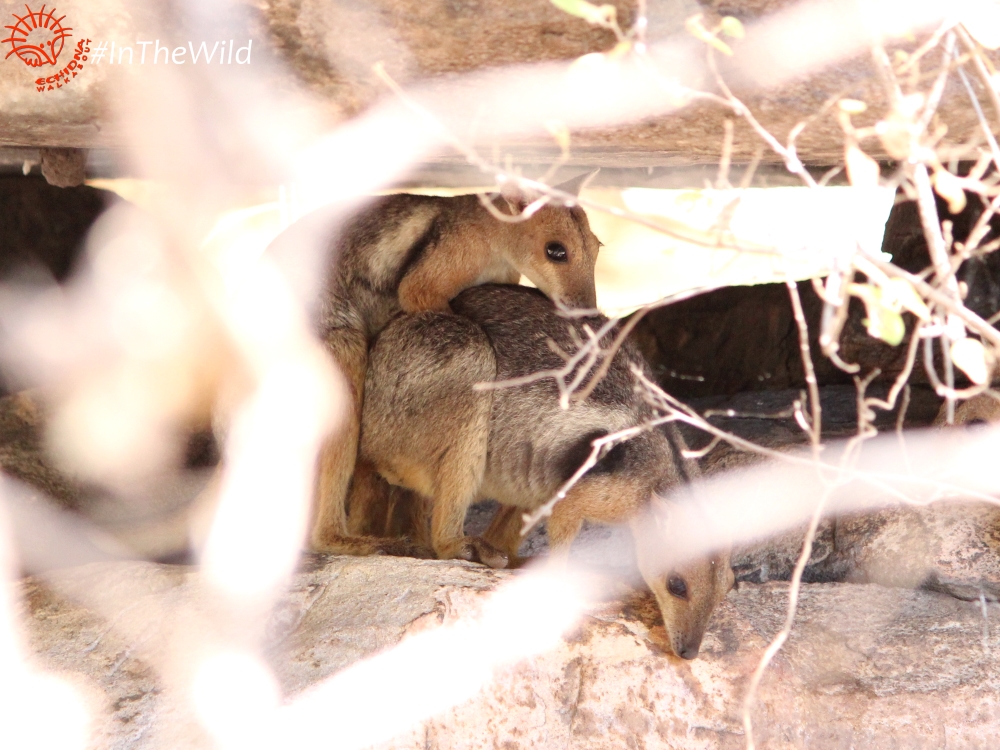 We have also watched them feeding in a rock crevice. The fresh leaves that fall from trees overhead were grabbed and devoured. This could just be opportunistic feeding, as most feeding apparently occurs at night when they come out of the rocks and onto the surrounding flat woodland. Studies show them to eat grass, other small flowering plants, and leaves of trees. 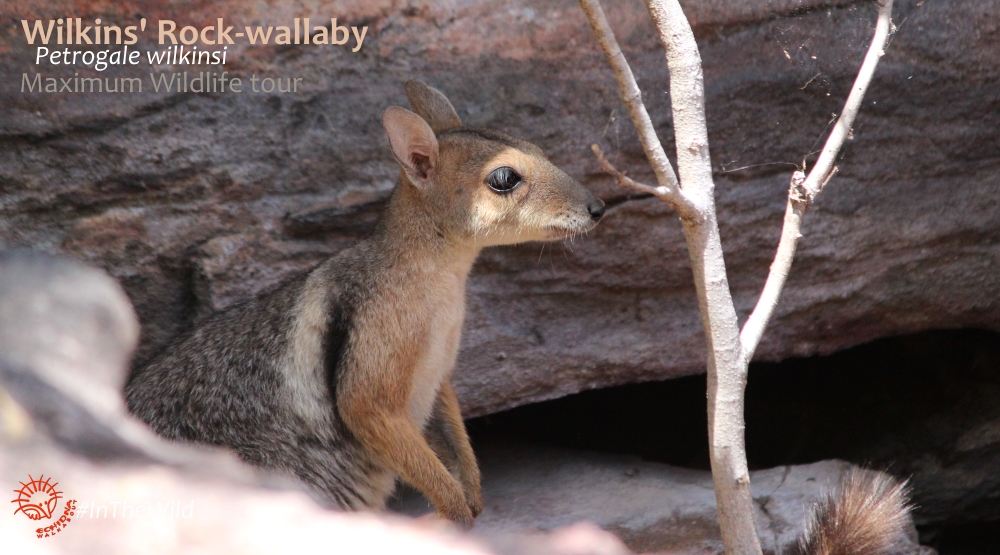 Though there are now several studies about the Short-eared Rock-wallaby group, most of these concentrate on basics of their biology – what they eat, how they use their habitat. Until 2019 the Wikipedia article on Wilkins’ Rock-wallaby was a stub of three lines (it has now been extended to 4 paragraphs & 2 references), and even the long-known Short-eared Rock-wallaby is only described in nine paragraphs and seven references.  Our photographs in this article are the official photographs of the species on Wikipedia.

This shows the importance of photographing and documenting what these animals are doing. Hundreds of regular tourists see these wallabies every year, and some probably see behaviour that is undocumented by science.

The benefit of going on our Maximum Wildlife tour is that your Wildlife Guide will take notice of the rock-wallabies, record and document their presence and behaviour, and submit the sighting to iNaturalist and the CSIRO Atlas of Living Australia.

The species is listed as Least Concern by the IUCN Red List, but not much is known about their population size. The Conservation Actions proposed by the IUCN are: “There is a need to monitor populations, research possible threats, and to study its responses to changes in the fire regime.”

To see these beautiful rock-wallabies and help contribute to understanding them join our Maximum Wildlife 21 day tour North & South.  Read about other kangaroos we see on this tour.

by Jessica Toreto Foxes that fly? What? Nooo! Flying foxes are gentle giants with a misleading...
Read More

Night sounds of the Northern Territory

At night, the Northern Territory Top End is for listening. There’s a special tropical hum in the...
Read More

“Frilly!!” The vehicle swiftly pulled over and did a U-turn on the Arnhem Highway, somewhere in...
Read More