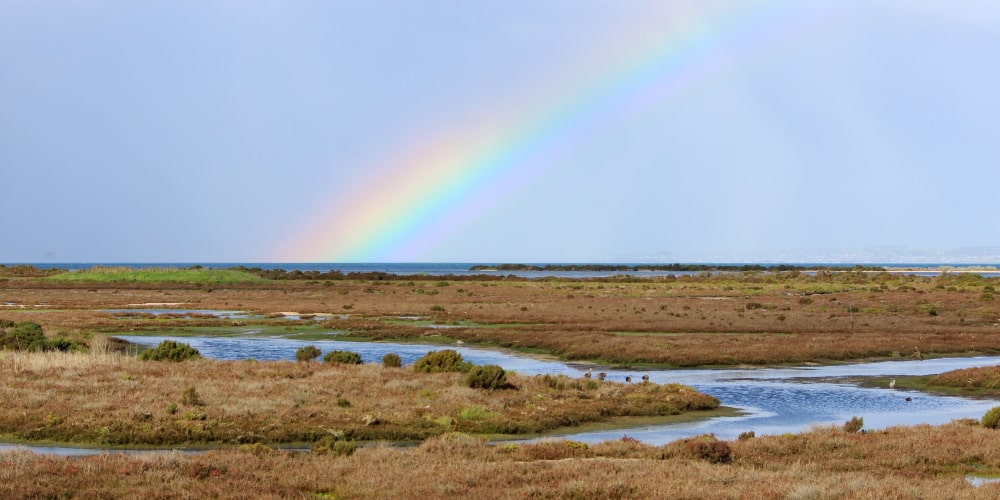 A pair of Brolga – Australia’s native crane – herd their vulnerable chick through the sedge swamp. The chick stands as tall as a 4 year old child, but still can’t fly, so the parents are cautious.

Suddenly, a large brown bird erupts from the sedge, startling the brolgas as much as us. 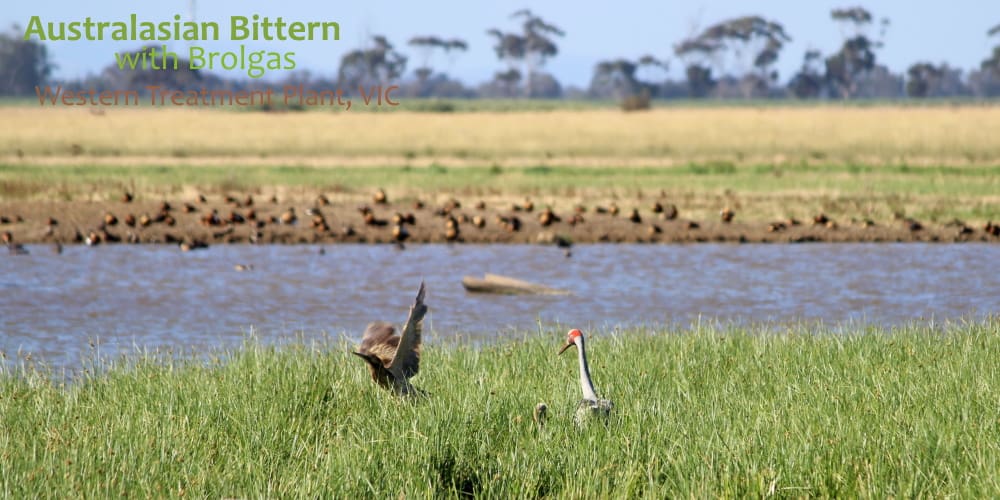 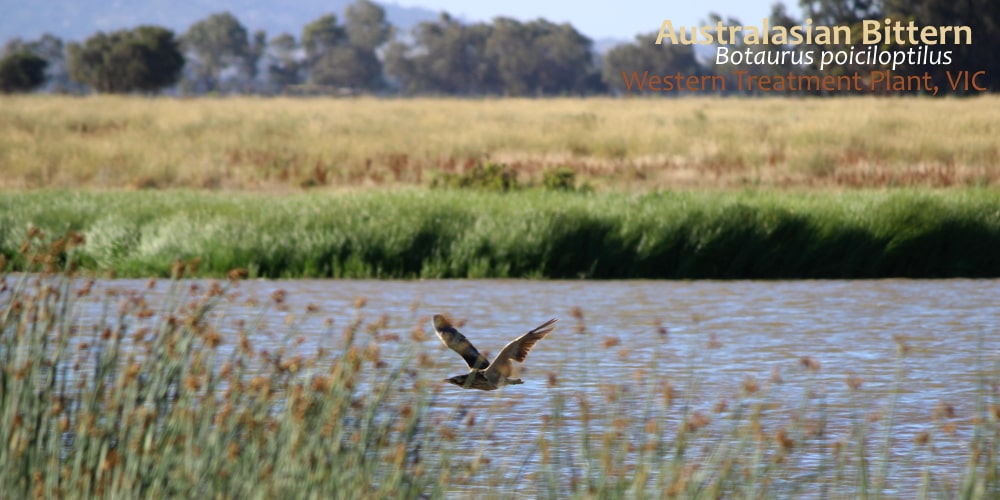 It’s an Australasian Bittern Botaurus poiciloptilus, the largest bittern in Australia. Bitterns are a type of very secretive heron, and their population is declining, so seeing one at all is a treat. Seeing one flushed by a Brolga is extra special. 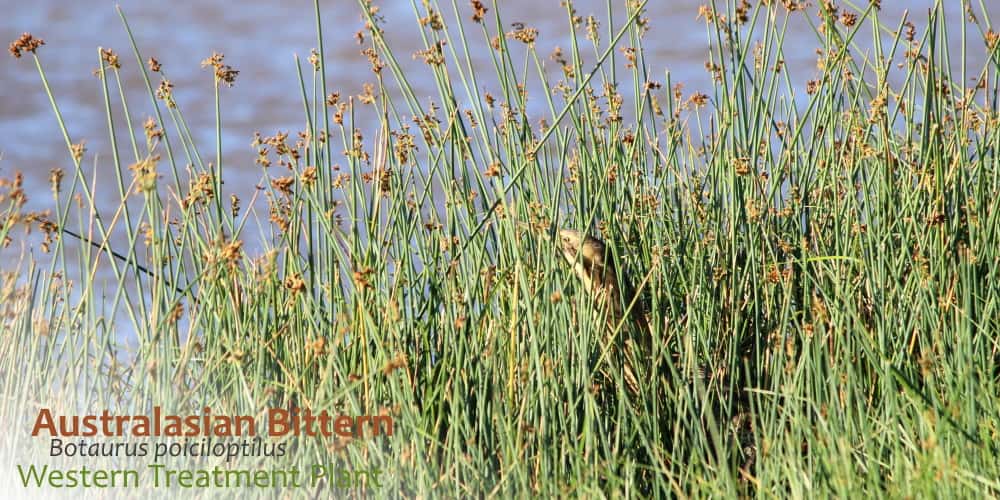 This is why I love the Western Treatment Plant. There’s not many places in Australia where you could see this. 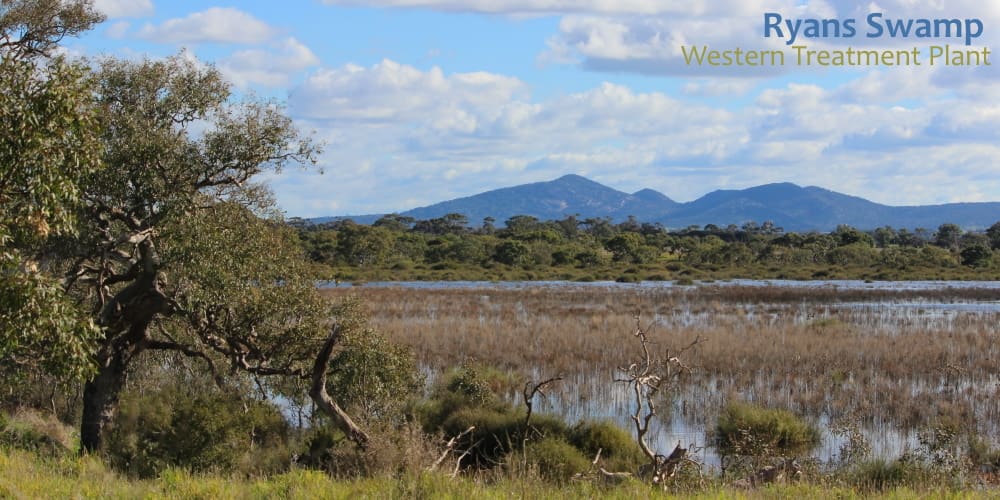 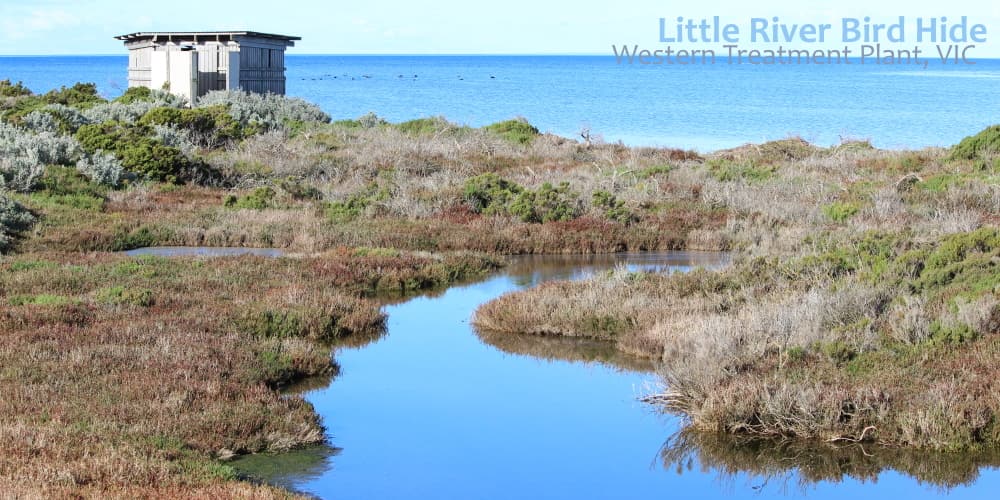 And management that treats wildlife as a priority.

Where is all this glory? This paradise on earth? 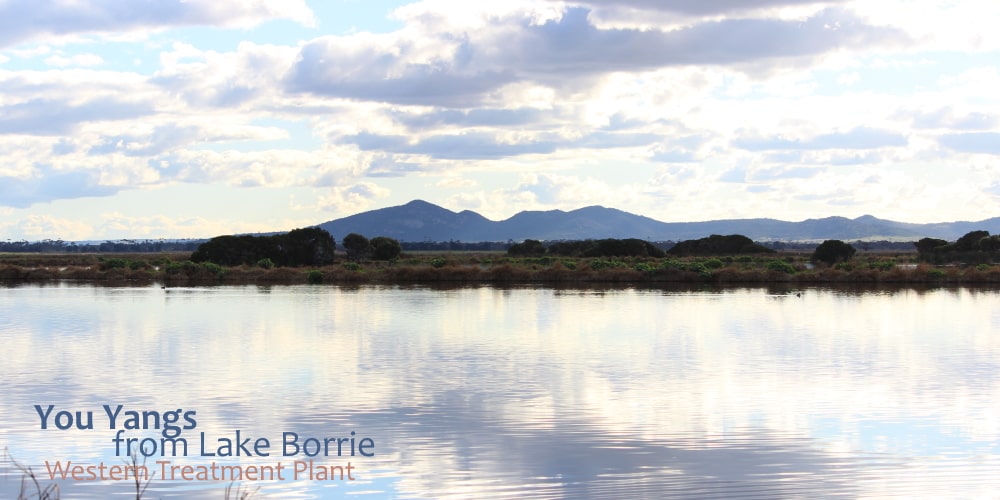 It’s a poo farm. A sewerage plant, servicing the city of Melbourne, Australia.

And its one of Australia’s best birdwatching sites. * 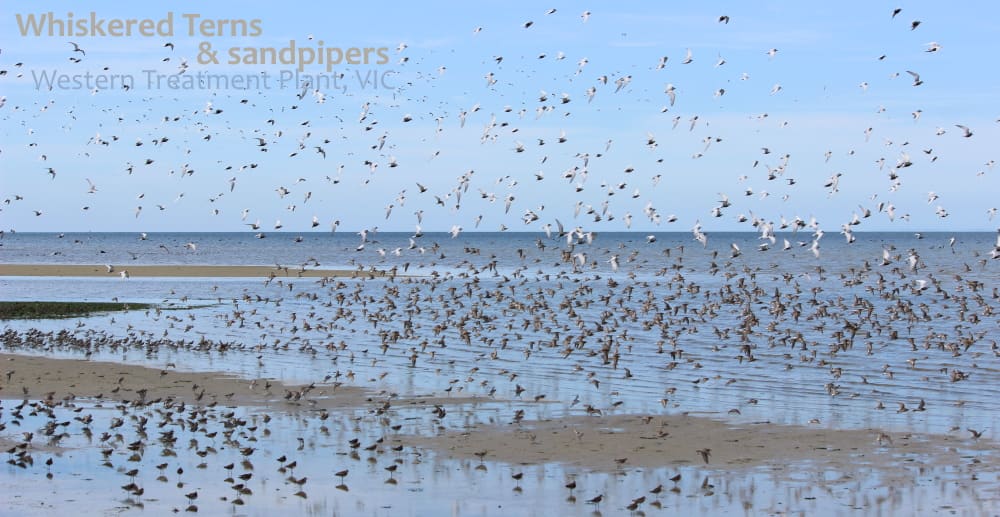 “Ewwww” most people say, automatically squeezing their nostrils together with their fingers. But not so – due to careful management and advances in technology there’s no smell. Most of the plant is very natural-looking, and not used for sewerage treatment anymore.

Most people think it’s just crazy birders in floppy hats who could bear to go there. But everyone I’ve visited with is amazed and impressed.

Because its not just about waders (shorebirds). There’s so many types of birds and animals here. 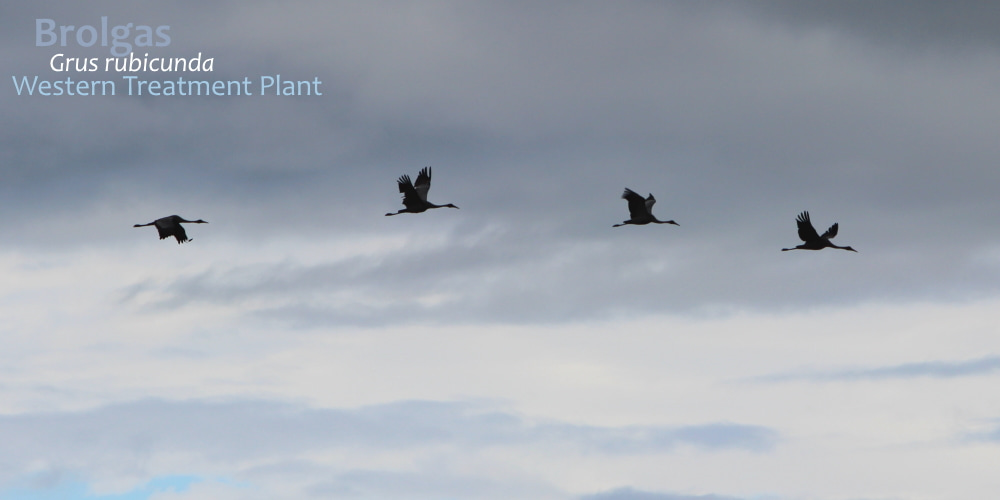 There are more raptors (birds of prey) than I’ve seen anywhere. Swamp Harriers: large, brown birds with white rump are the most common bird of prey, but sometimes outdone by Brown Falcons, Black-shouldered, Black and Whistling Kites. Frequently, an Australian Hobby, Peregrine, White-bellied Sea-Eagle, or even a beautifully spotted and striped Spotted Harrier. 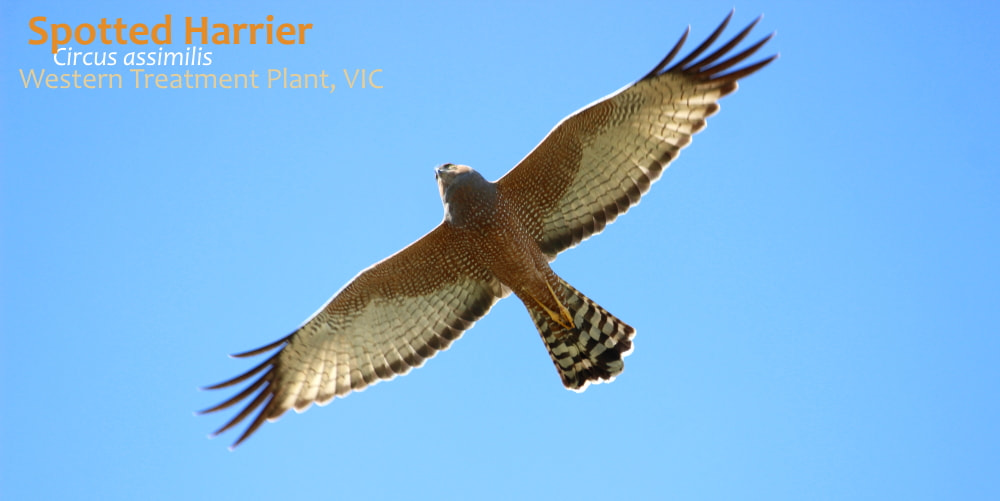 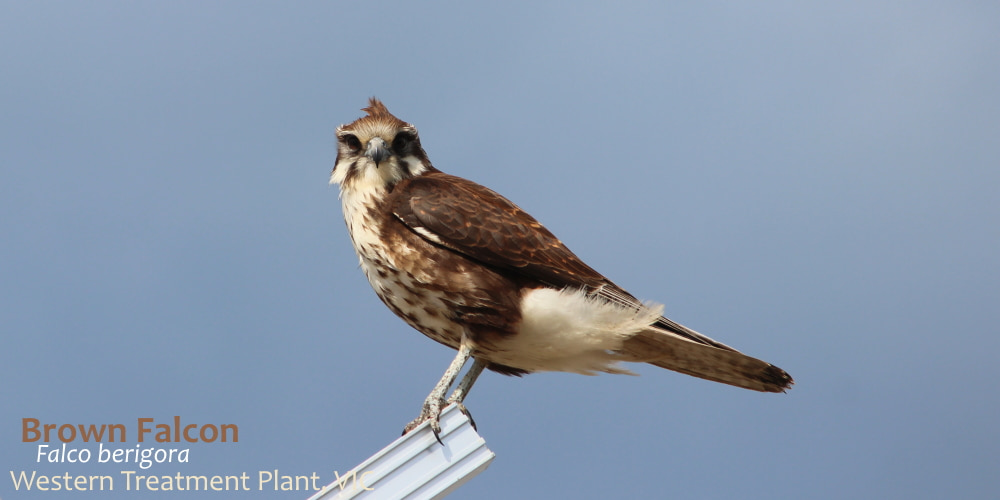 Driving along the Little River, through chest-high reeds and sedges, disturbs dozens of Australasian Swamphens. These gorgeous purple chickens have enormous red legs and a red facial shield that is so bright it looks like a child’s plastic toy. 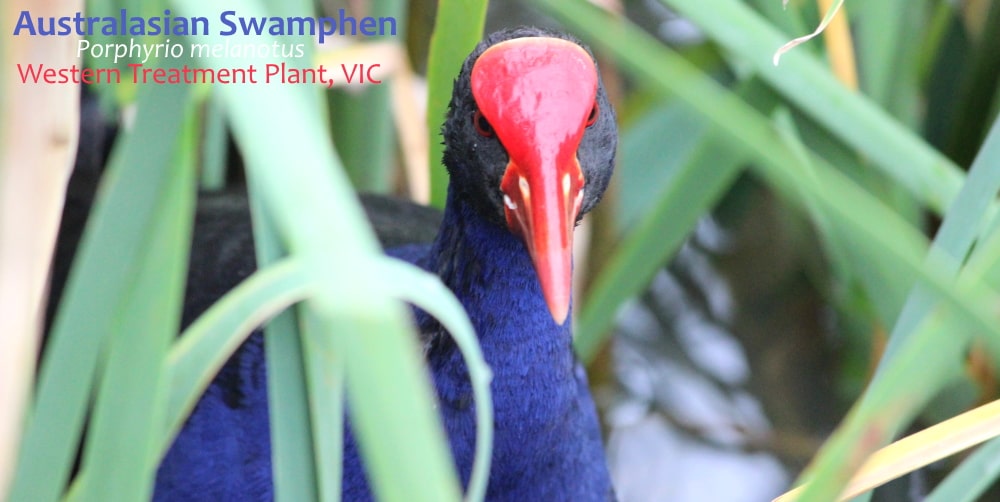 Closer to the lake, a thousand Whiskered Terns lift off. It seems no effort at all to fly for these small, elegant seabirds* with black belly, pearly-grey wings and bright red beak and legs. They hang in the air, barely flapping, more like a hang glider than a bird. 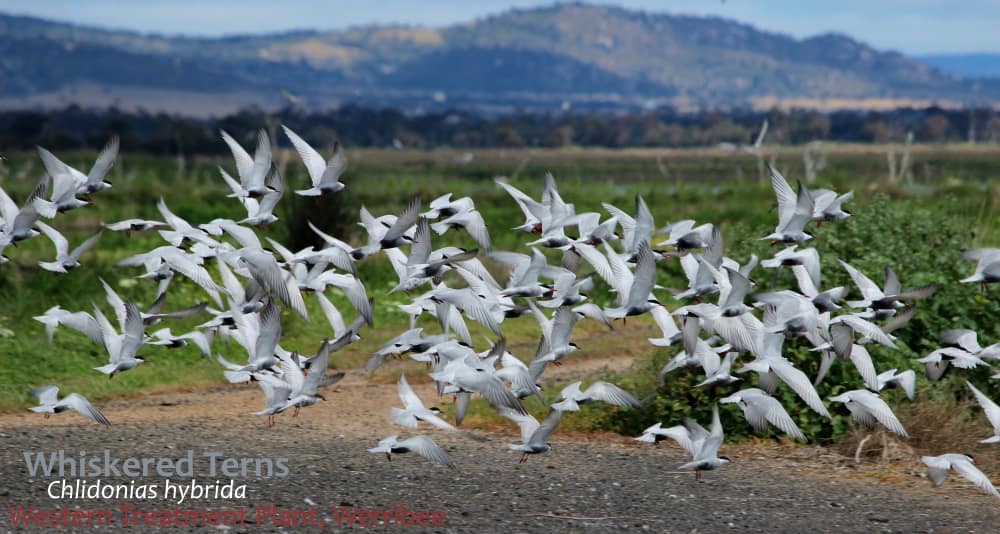 Surprise, surprise – the Western Treatment Plant is a place for anyone who loves nature. 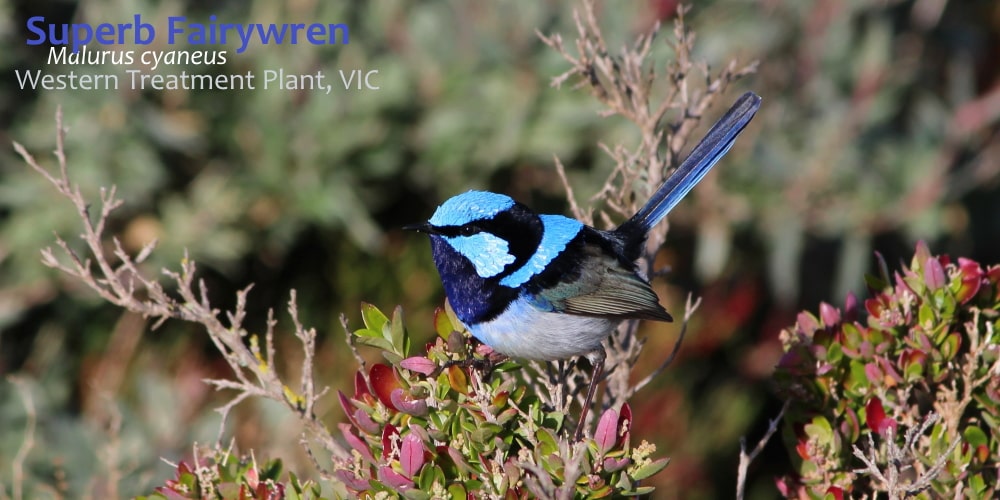 If you would like to see lots, and lots of electric and sky-blue Superb Fairy-wrens – there’s no better place.

If the orange-cheeks, bambi spots and zebra-striped tails of a flock of Zebra Finches are a dream come true for you – there’s no better place than the Western Treatment Plant. 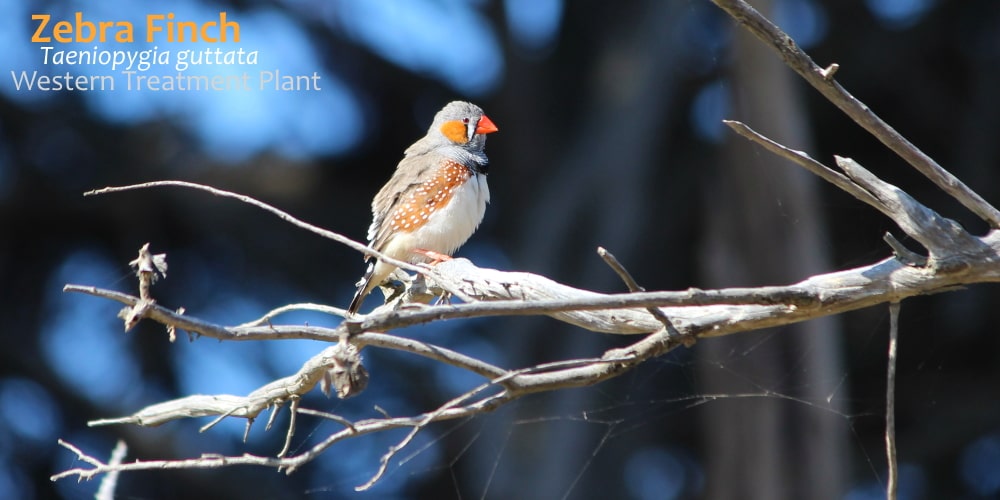 Or maybe you’d love to get a really good look at those difficult, stripy brown birds that always seem to fly off before you can get a picture. There’s no better place to see Horsfield’s Bushlark, Striated Fieldwren, Golden-headed Cisticola, Little Grassbird, Australian Pipit and Australian Reed-warbler. 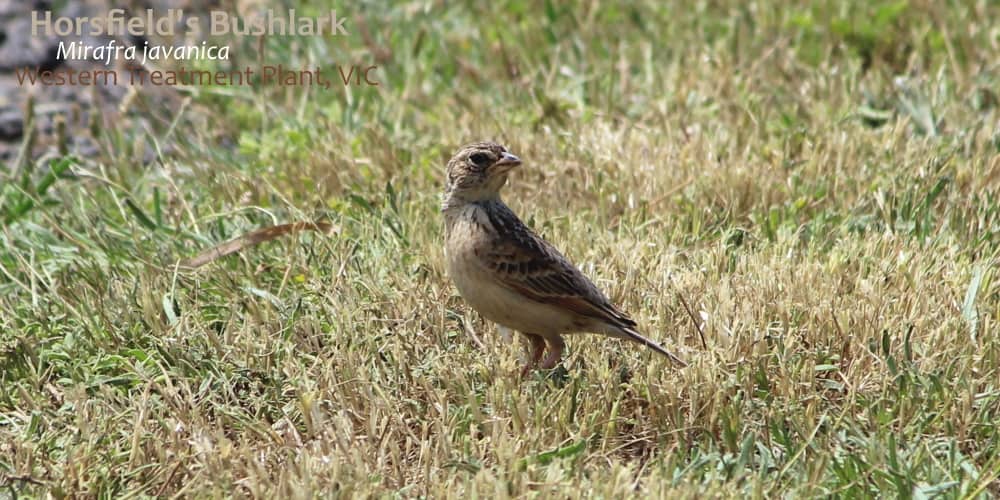 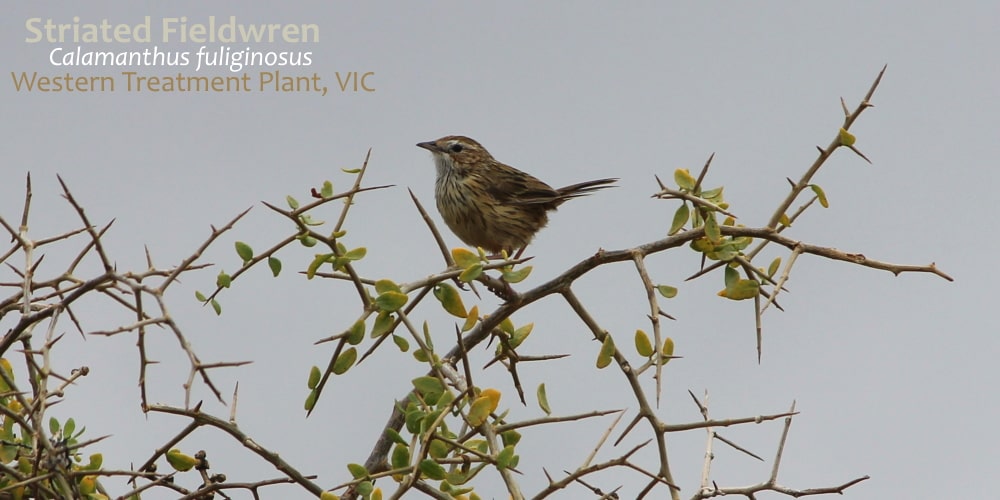 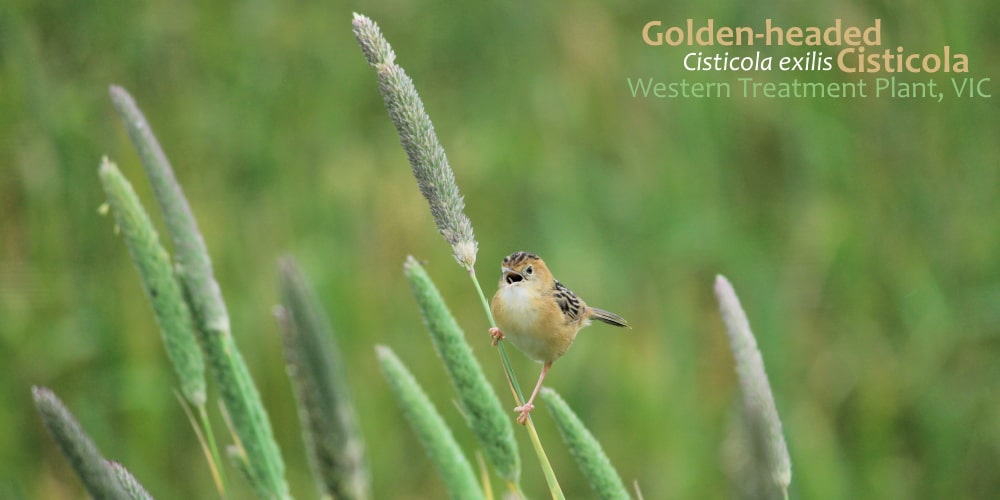 As for ducks, they are here year-round. Large numbers of Grey & Chestnut Teal, Hardheads, Black Swans and Pacific Black Ducks are usually present. Huge flocks of Pink-eared Ducks, Australian Shelducks and Australasian Shovelers can be seen at certain times of year. A couple of Blue-billed and Musk Ducks are always somewhere on the ponds. Sometimes a few endangered Freckled Duck, a couple of Cape Barren Geese or a Magpie Goose can be seen. If there’s a rare duck in town, this is where it will be. Famously, a Tufted Duck from Asia appeared in 2019, creating a mega-twitch (an event where hundreds of birders travel to a site just to see one bird). But Tufty wasn’t the first vagrant duck to be seen at ‘the farm’ – most recently a Plumed Whistling-duck turned up in 2017; and a Northern Shoveler in 2011 & 2013. 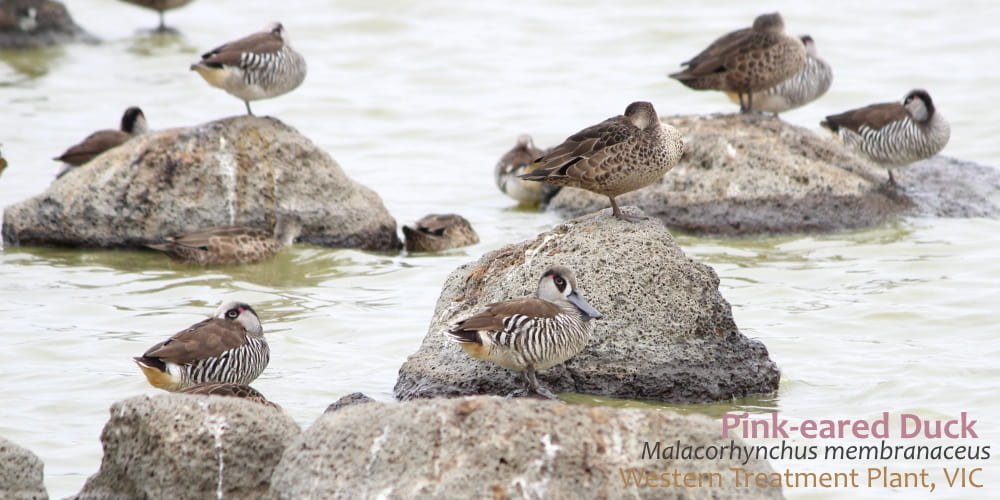 Finally, if you are a birder who loves waders and shorebirds (those elegant grey-brown birds that fly across oceans to be here), and would like to see a Sharp-tailed Sandpiper, Red-necked Stint, Red Knot or a Marsh Sandpiper; or the endemic waders Red-necked Avocet, Banded Stilt – well, there’s no better place in southern Australia.

My favourites, the Curlew Sandpipers fly down from the Siberian Arctic in big flocks – the flocks were once even larger, but these beauties are now listed as Critically Endangered due to habitat degradation all along their flyway. The population has suffered a decline of 75% in 20 years. Partly contributing to their decline is destruction of mudflats in Australia, mostly for housing developments. A new housing and marina development proposal on RAMSAR-listed Toondah Harbour in south-east Queensland is yet another example of how we are chipping away at this, and other endangered birds’ critical feeding grounds. 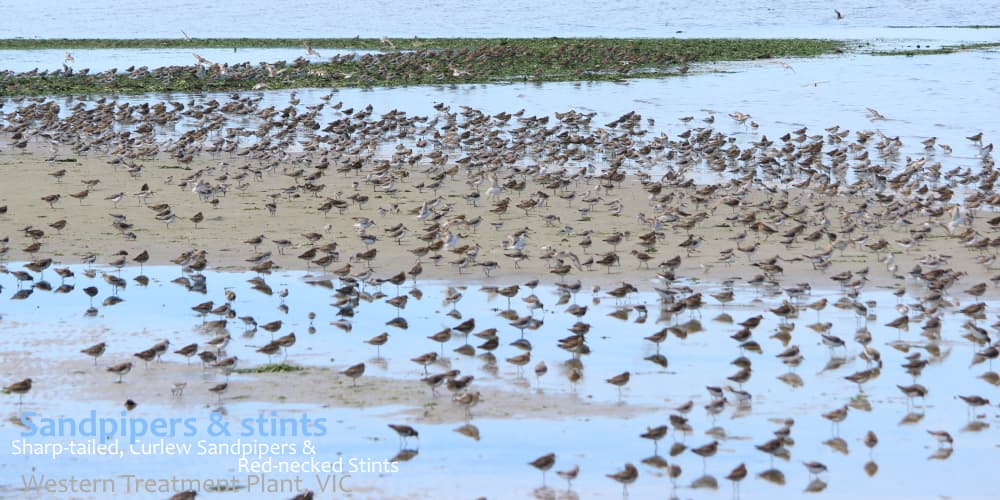 Luckily here, at the Western Treatment Plant, the mudflats, intertidal zones and wetlands are treasured and protected for these birds. No disturbance is allowed (no fishing or bait or shellfish collection), and water levels and vegetation are managed to benefit wildlife. Many of the wetlands are no longer used for sewerage treatment, but retained as conservation ponds. Special effort is made to create and enhance habitat for shorebirds, critically endangered Orange-bellied Parrot Neophema chrysogaster and Growling Grass Frog Litoria raniformis.

Do yourself a favour – include a visit to the Western Treatment Plant on your next trip to Melbourne. Or if you’re lucky enough to live nearby and get an opportunity to go – do it. You won’t need a peg for your nose. 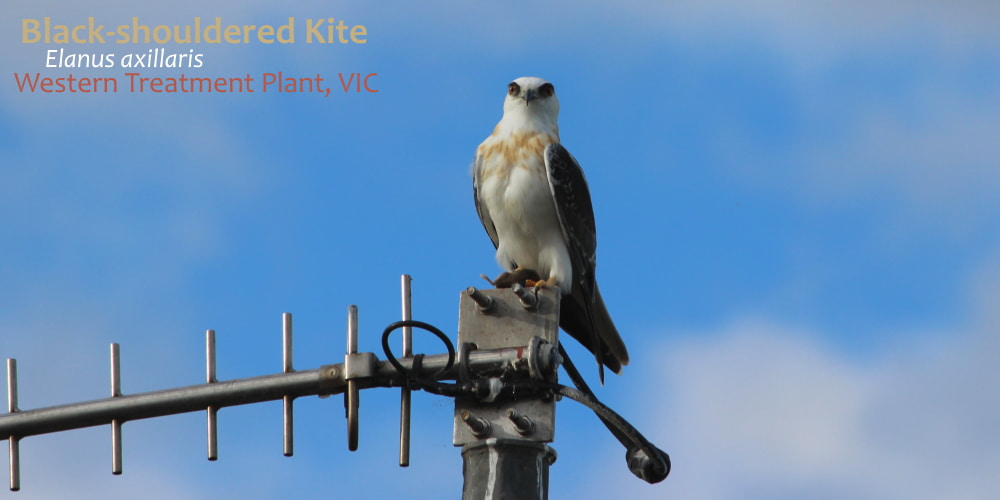 Read this amazing article about the history of the Western Treatment Plant: https://www.foreground.com.au/environment/industrial-ecology-werribee-western-treatment-plant/

This amazing app shows the extent of loss of intertidal zones worldwide from 1984 to 2014: https://www.intertidal.app/

* Whiskered Terns are inland terns – they are often found far away from the sea.  When I talk of them being ‘seabirds’ I mean it to describe their shape to those who don’t know birds well. Most terns are seabirds.
* I still can’t pick a Little Stint from a Red-necked Stint, but I’m hoping to learn soon!
* the Western Treatment Plant is consistently named #1 or #2 best birding sites in Australia.