Where To Watch Australian Animals, part 2. 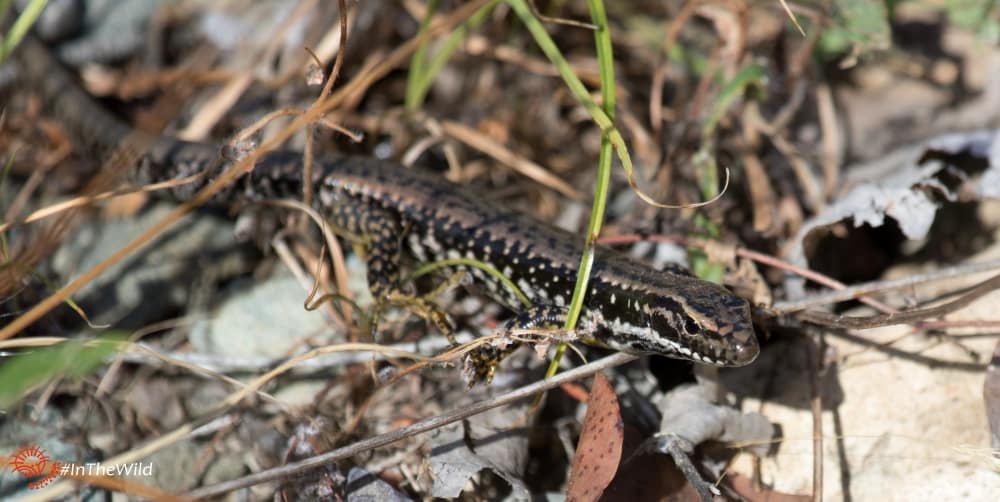 Do you have a particular animal you want to watch in Australia?

Do you have a passion for cuckoos, or snakes, or gliding possums for example? Or maybe you love skinks, or endemic rodents, or monarch flycatchers or woodswallows. This article, in partnership with Part 1: Where to see Australian Wildlife, will give you some tips on where in Australia is best to watch wild Aussie animals. In part one we discussed echidna and platypus, koalas & wombats, kangaroos, wallabies and bandicoots, dingoes, dolphins, seals and whales and bats and flying-foxes. Following are some of the other mammals we watch and where:

Australia’s possums are not like the Virginia (American) Opossum – only the name is similar. Our possums come from a different group in the marsupial family, and are more closely related to koalas and kangaroos than to the opossums of North and South America. 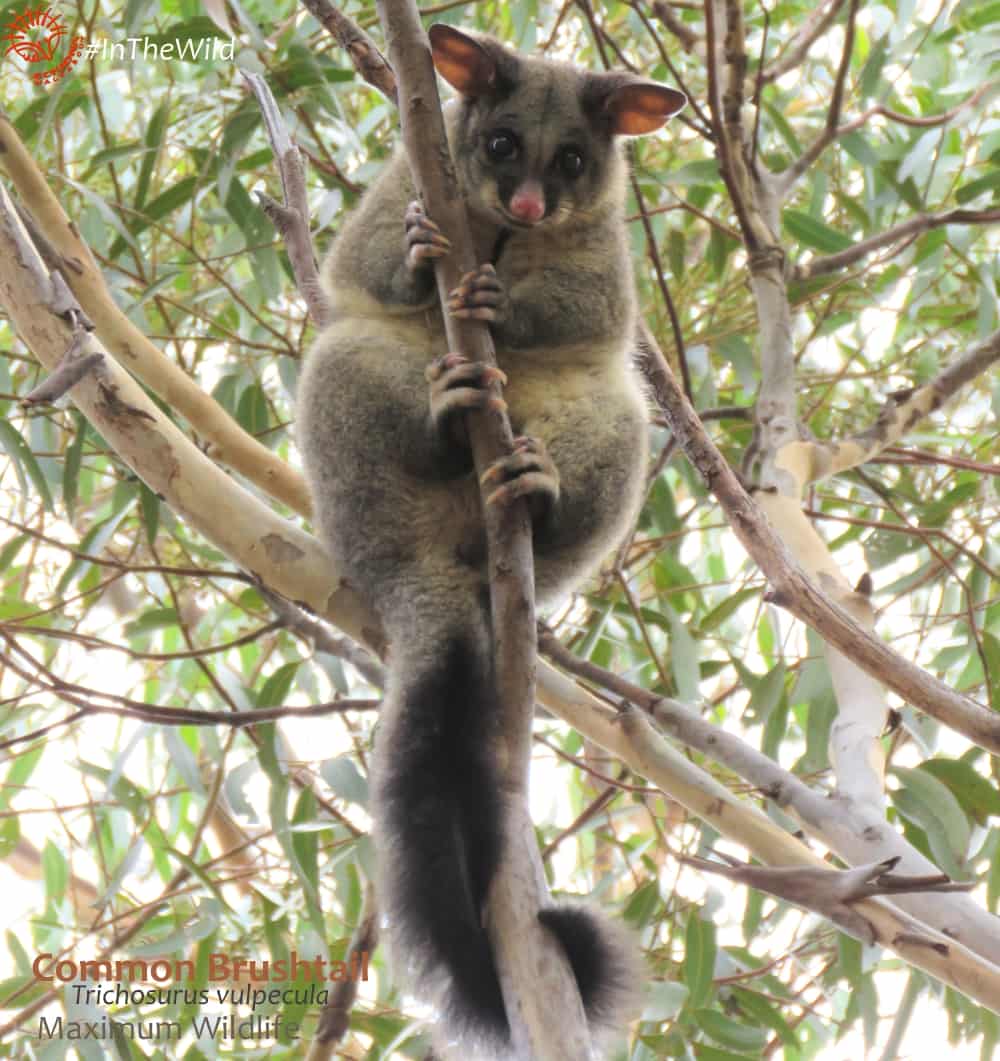 Common Brushtail Possums and Common Ringtail Possums are often seen in East Gippsland, and occasionally in the You Yangs. 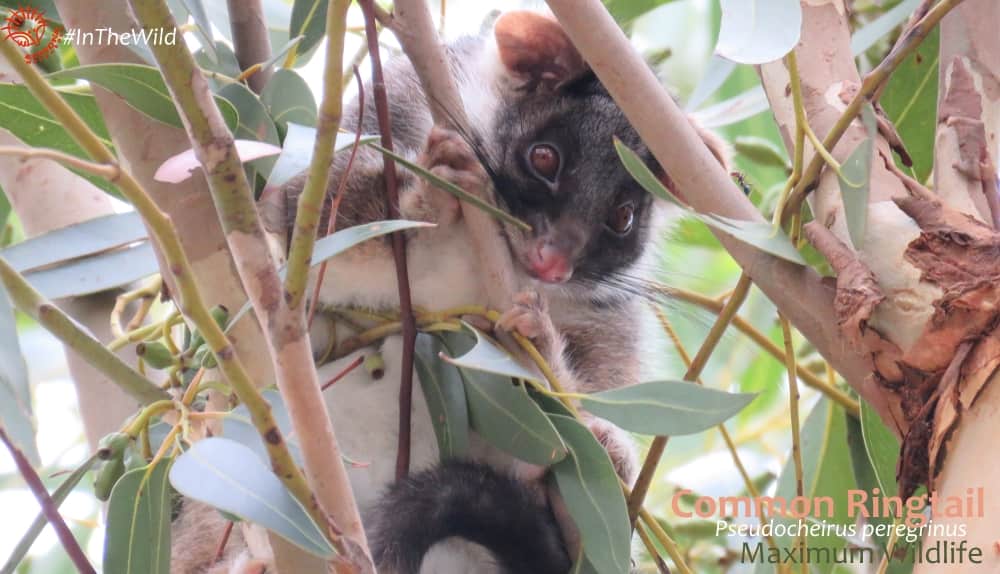 East Gippsland is also home to Greater Glider, Sugar Glider, Yellow-bellied Glider and Feathertail Glider. These beautiful possums have a membrane of skin between their arms and legs, which they stretch so that they can glide when jumping from tree to tree. This gliding ability has developed independently in several groups of possums – the Sugar & Yellow-bellied Gliders are in the Petauridae (related to Leadbeater’s and Striped possums), the Greater Glider is a ringtail, and the Feathertail Glider is not related to anyone except the similar Feather-tailed Possum of New Guinea.

Northern Brushtail can been seen in the Top End.

Australia has many mammals that are not marsupials! We have quite a large number of endemic rodents that have been in Australia for thousands of years and have adapted to our environment. They are as Aussie as kangaroos and koalas, and we think they deserve to be respected and identified from superficially-similar introduced pest rodents. 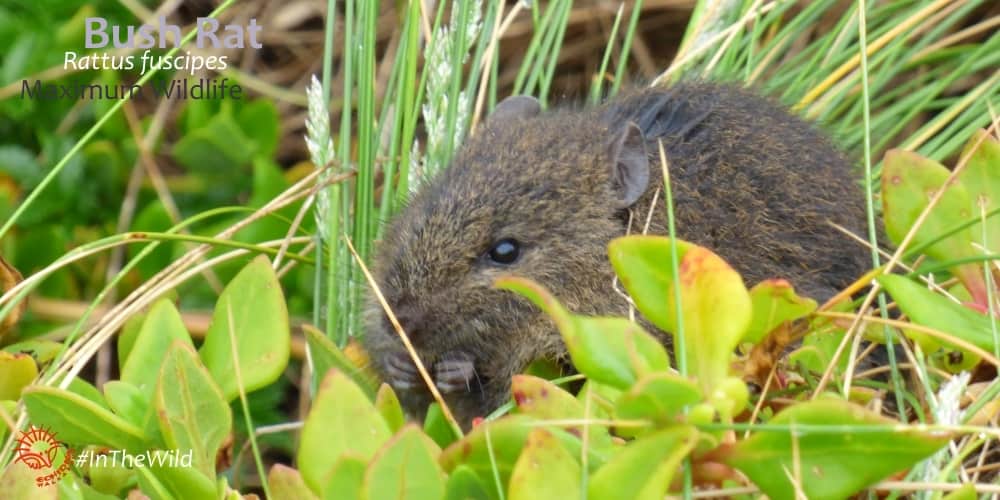 Along the Great Ocean Road we sometimes see the cute native Bush Rat. In East Gippsland, particularly near Mallacoota, we usually see the lovely Swamp Rat when they come out in the early morning or late afternoon to forage. In part one we featured emus, brolgas, jabirus and bustards, parrots & cockatoos, fairy-wrens, honeyeaters, pigeons, lyrebird and kookaburras. Here are some other bird groups we watch:

Australia’s cuckoos are spectacular, with thrilling calls, but none of them say ‘cuck-oo’! Like the cuckoos of Europe, they are nest parasites, and lay their egg in the nest of another. Interactions between host parent and cuckoo youngster can be fascinating to watch in spring and summer. 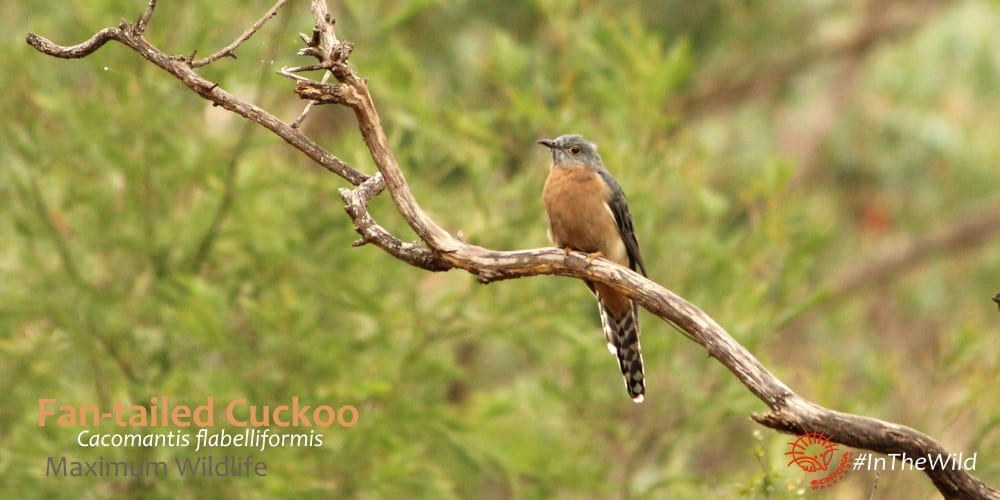 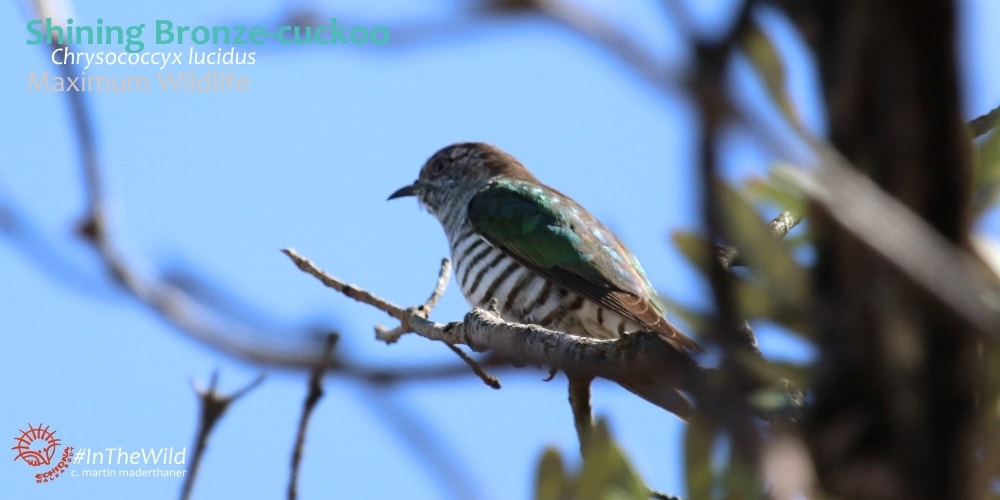 East Gippsland is home to another six species whose calls fill the air in spring: Eastern Koel, Brush, Fan-tailed & Pallid Cuckoo and Horsfield’s and Shining Bronze-cuckoo.

These birds are very special and restricted to Australia-New Guinea. The male builds a structure to attract the female, and displays prominently near it. Its wonderful to watch, or see the elaborate bower with all its decorations. 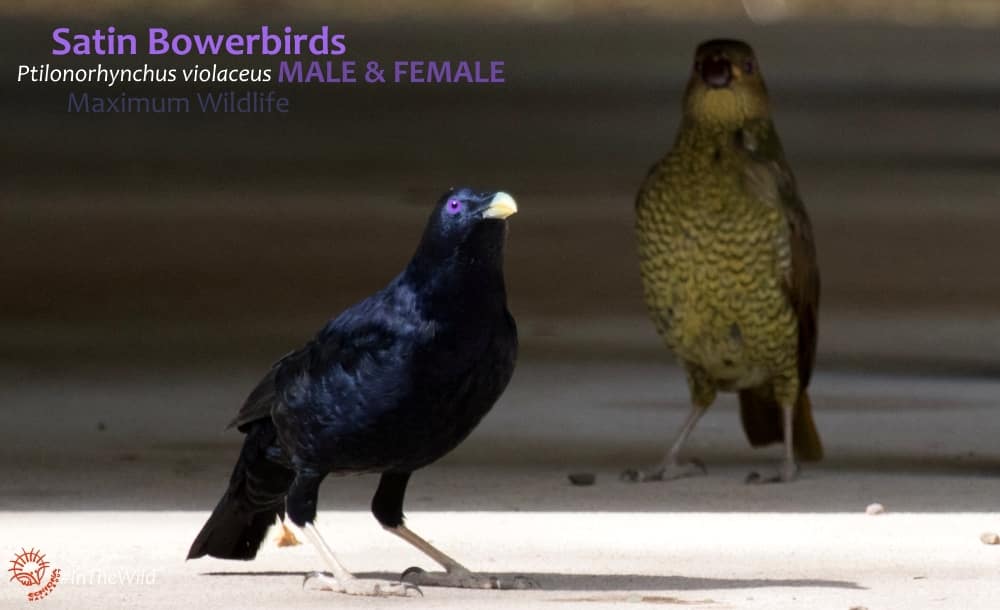 Satin Bowerbirds are regularly seen in East Gippsland. The male decorates his bower with blue objects. 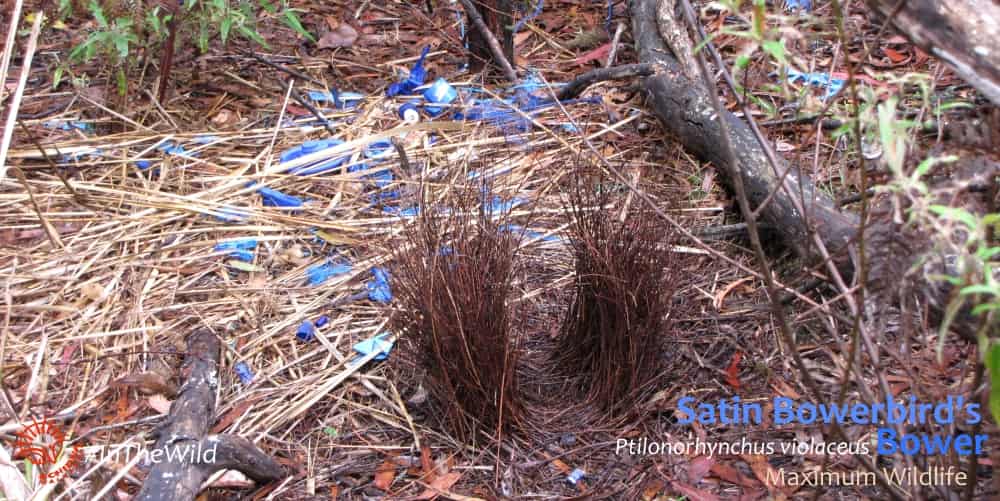 Great Bowerbirds decorate their bowers with white objects. We watch them in the Top End. Rarely, the uncommon Spotted Bowerbird can be seen in Mungo.  This bird, like all the bowerbirds, includes mimicry in its wide range of calls.  Listen to the strange and wonderful calls of the Spotted Bowerbird (including an impressive version of Whistling Kite) here on the Wild Ambience site

Australian flycatchers (family Monarchidae) are well distributed and fairly common through the Northern Territory Top End – we love to watch Shining, Leaden, Broad-billed and Paperbark Flycatchers on the Wild Top End part of the trip.  They are busy, often noisy and cheerful little characters. Monarchs are part of the family too – they are plumaged in a similar palette of orange, grey, white and black, but most have black faces or eye-rings.

The Black-faced Monarch, Satin, Leaden and Restless Flycatcher and Magpie-lark can all be seen in East Gippsland, and the last two can be seen in the You Yangs/Great Ocean Road. 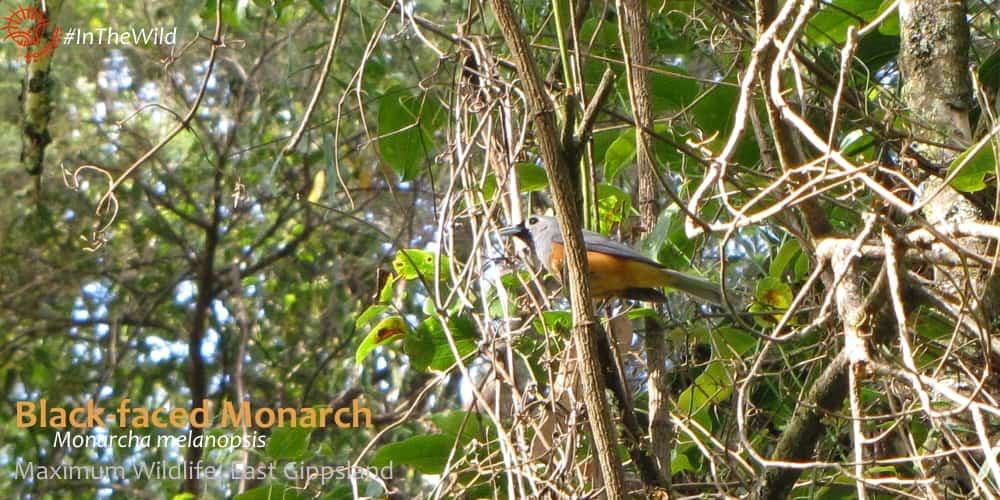 The Pilotbird Pycnoptilus floccosus is a charismatic, medium-sized brown bird that has a magnificent song. We sometimes see them in East Gippsland, especially at sunset near the beach, hopping around confidently as they search for late afternoon insects. 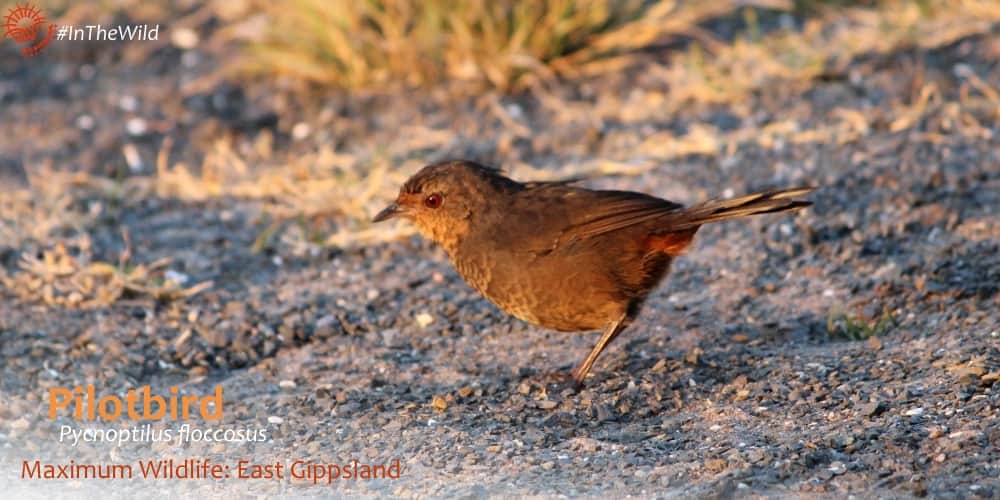 Bristlebirds are a family endemic to Australia. There are three species, two of which are endangered. The third species – the Rufous Bristlebird Dasyornis broadbenti – is quite easily seen along the Great Ocean Road if you know when and where to look. 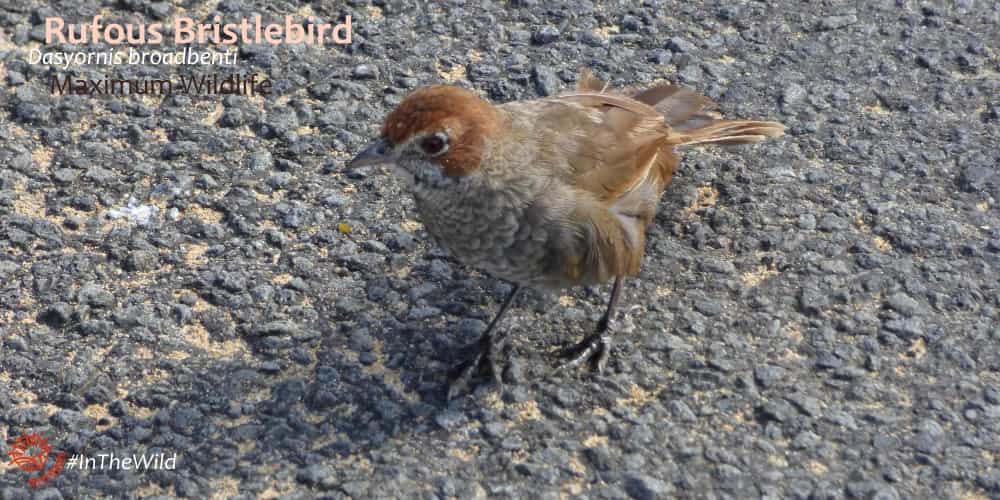 About the endangered Eastern Bristlebird

The Eastern Bristlebird Dasyornis brachypterus only lives in three places, all in Australia’s east – north of Mallacoota in East Gippsland, around Jervis Bay in NSW and in south-east Queensland/northern NSW. The northern subspecies Dasyornis brachypterus monoides in Qld/northern NSW may have as few as 30 pairs surviving, and is currently listed as critically endangered.

North of Mallacoota in East Gippsland is one of the few known sites for the southern subspecies of Eastern Bristlebird. We don’t usually visit the site, as it simply isn’t practical, and we haven’t yet seen this bird. While we don’t believe that interest from birders does any real harm to endangered species, chasing endangered species to the exclusion of all others is not part of our mission.  We would never harass a bird by aggressively attempting to flush them, or using recordings incessantly, simply to get a tick. We would rather support the efforts to protect them, promote and learn about their threats, keep their environment safe and clean and hope that one day their numbers increase and we can see them on tours.

This family is a truly iconic Australian one – the magnificent songs of the Australian Magpie, Pied Currawong and Pied Butcherbird are amongst the great soundtracks of Australia. 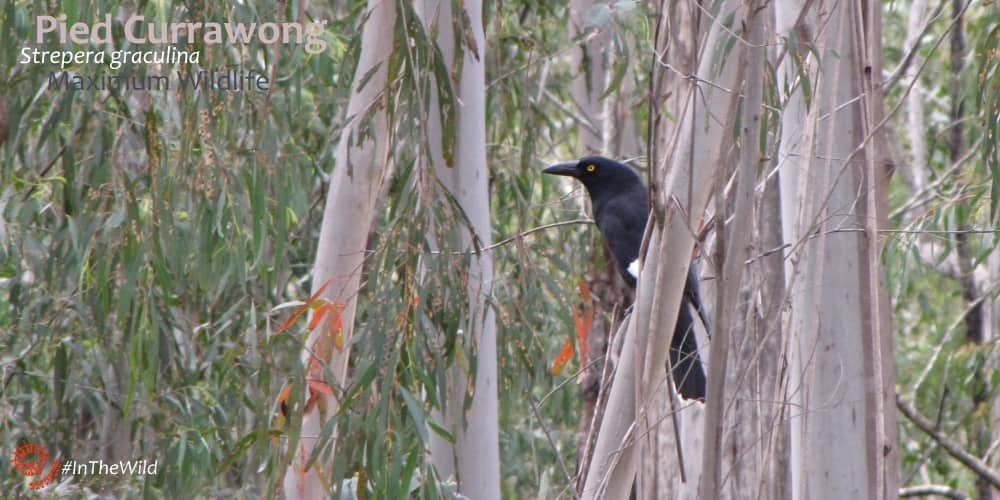 The currawongs and Australian Magpie Cracticus tibicen are mostly birds of the south – they can be seen in all our destinations except the Top End. The Australasian Treecreepers are another family endemic to the Australian ecozone. There are seven species in total and we often watch four on the Maximum Wildlife 21 day tour. 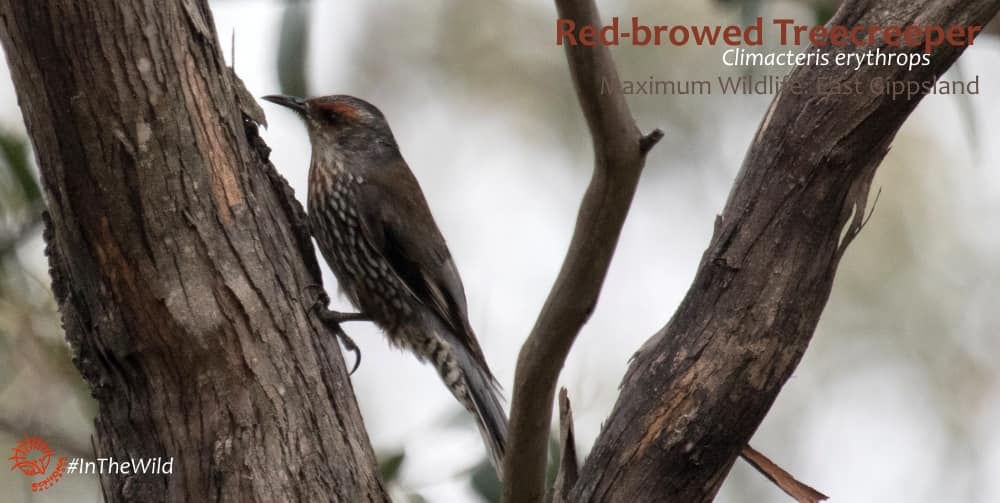 In Mungo, particularly in Hattah-Kulkyne National Park, we love to watch the subtle and elegant Brown Treecreeper Climacteris picumnus.   These birds were once more common around Melbourne, and many of us grew up watching them. 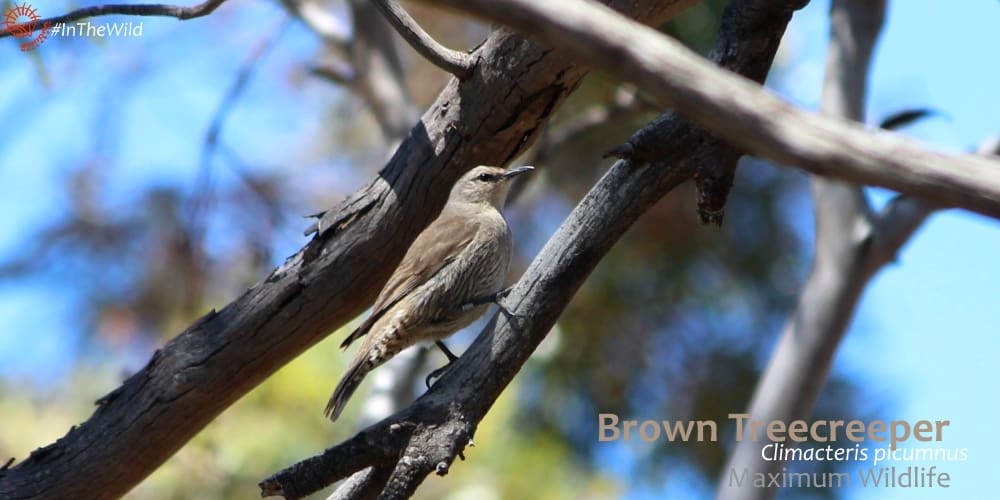 The Black-tailed Treecreeper Climacteris melanurus is the darkest in the family, and lives in the dry forests in the Top End, particularly around Bird Billabong in Mary River National Park.

Part one dealt with crocodiles, monitor lizards and dragons. Here we introduce our beautiful snakes and skinks.

Australia’s snakes are exciting and beautiful. We have many elapids – ground-dwelling, venomous snakes – and this group probably originated in the Australia-New Guinea region.  Some are quite large – the Eastern Brown Snake Pseudonaja textilis grows to 2.5metres – and delicately coloured in shades of grey, black, brown and red. 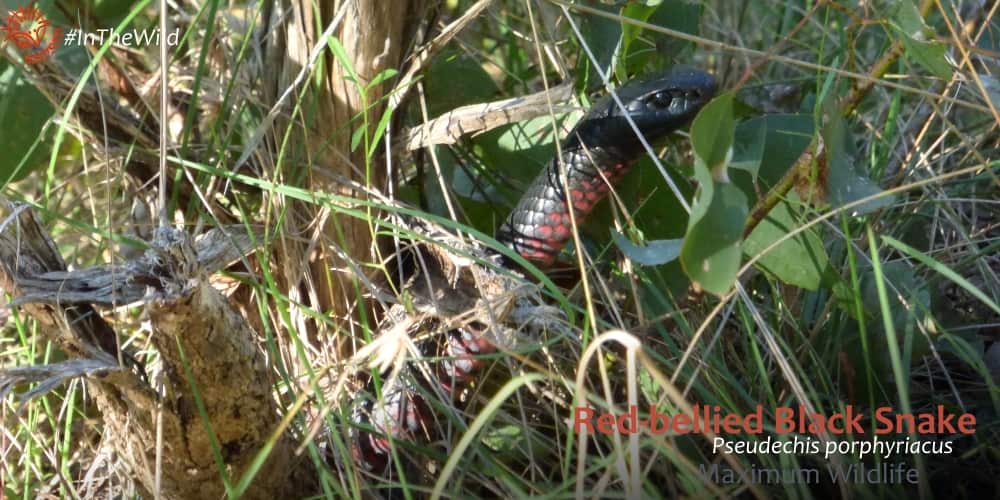 There has been much talk about how dangerous they are, but in reality they pose very little danger to wildlife watchers. 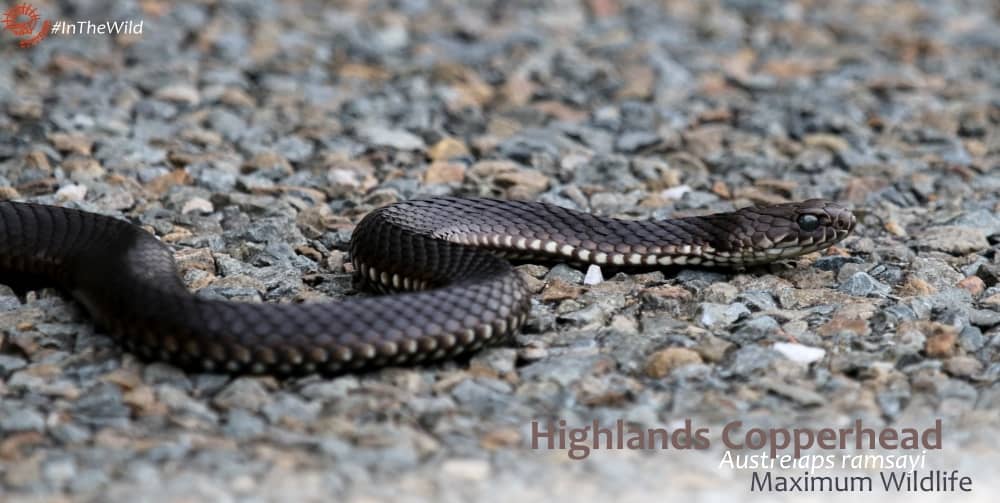 Both the south and the north have good snake-watching opportunities. The south is mostly home to elapids, while the north has a range including colubrids, pythons and elapids.

The Top End is great for a variety of snakes, from the very large Water Python (to 3metres) to the tiny Common Green Tree Snake.  We sometimes see Black Whipsnakes and Slaty Grey Snakes too. 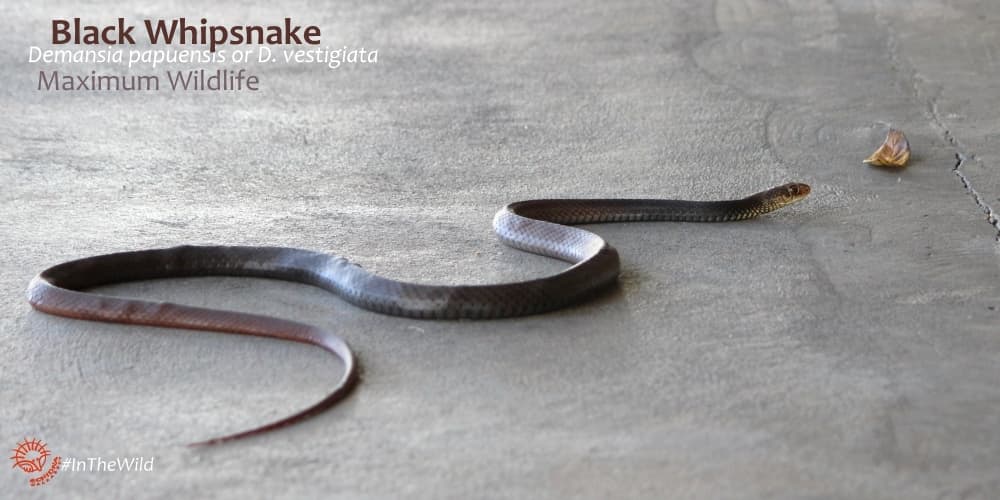 Australia has some of the richest diversity of skinks in the world. They are mostly small – with the exception of the bluetongues – and most have smooth scales and no neck. 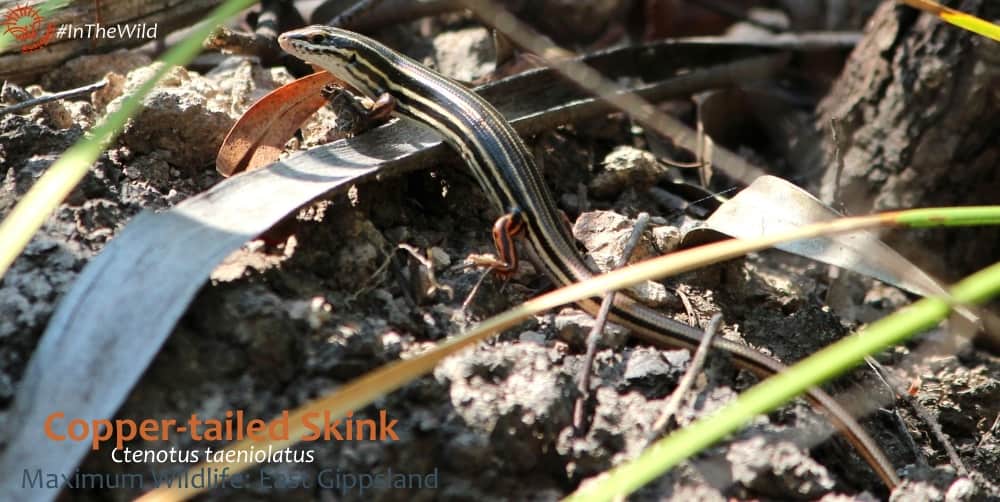 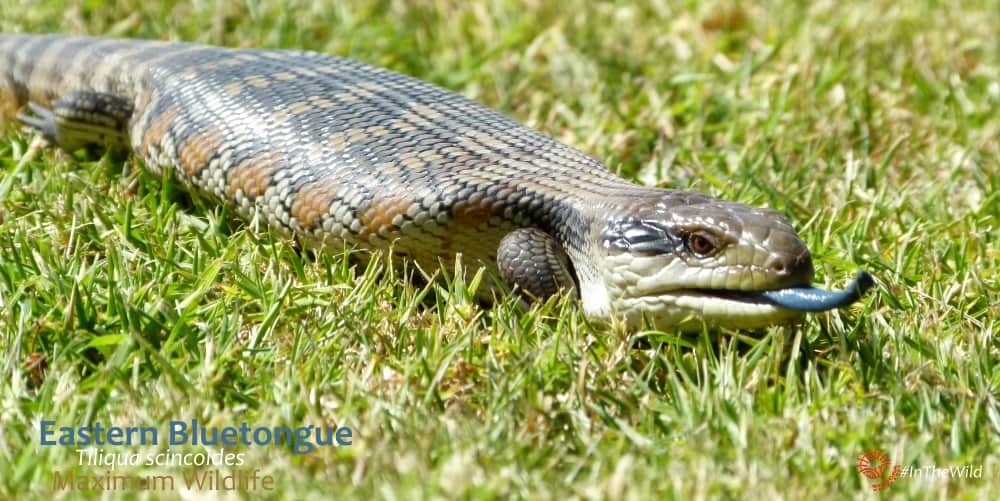 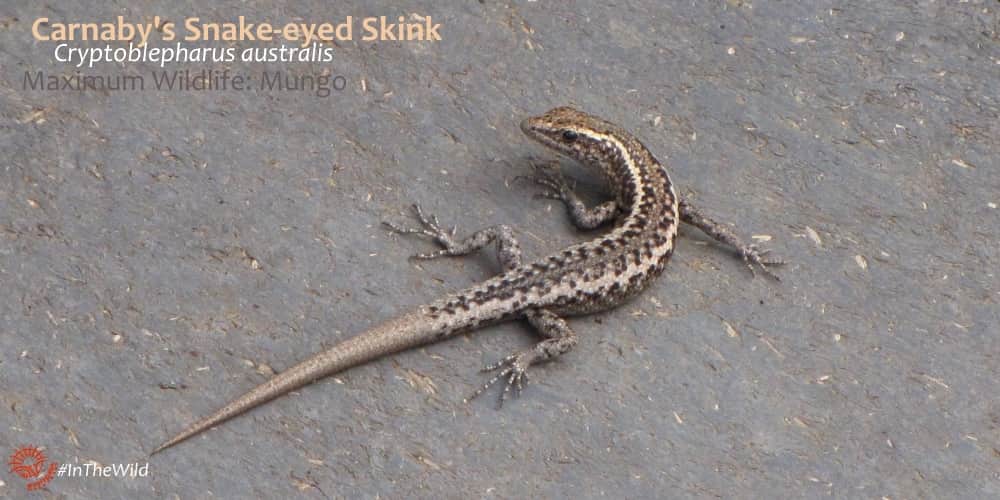 Australia’s deserts are hotspots of skink diversity. In the Mungo Outback several lovely skinks are found, including one of the largest – the Shingleback/Stumpytail/Bobtail/Sleepy Lizard is common.

Read about the love life of Shingleback Lizards

There is so much wildlife to watch in Australia, we just have to plan a part 3… coming soon

Where To See Australian Wildlife, part 1.