There’s lots of amazing and interesting facts about koalas, but with new science and breakthroughs happening all the time, here’s the latest news about koalas:

Why go to the bar, when the drinks come to you? It is widely believed that koalas don’t drink, and get all the water they need from the leaves. But very new research suggests that this may not be true. Koalas were seen recently drinking rainfall running down the trunk of a tree, in all months of the year, in hot and cold weather, and when free water was available in dams and waterholes nearby.

This water is called stemflow: water running down the trunk or branches of a tree.

Echidna Walkabout & Koala Clancy Foundation first reported this behaviour in 2015, after seeing it happen many times since 2006. See our blogs from 2018 and 2015.  These observations were analysed for this latest koala research by Dr Valentina Mella of the University of Sydney. 44 of the 46 observations of this behaviour in the paper are ours, from the You Yangs, and our contribution is recognised in the paper. (Mella 2020) Mature female koala drinking from tree trunk, You Yangs May 2010 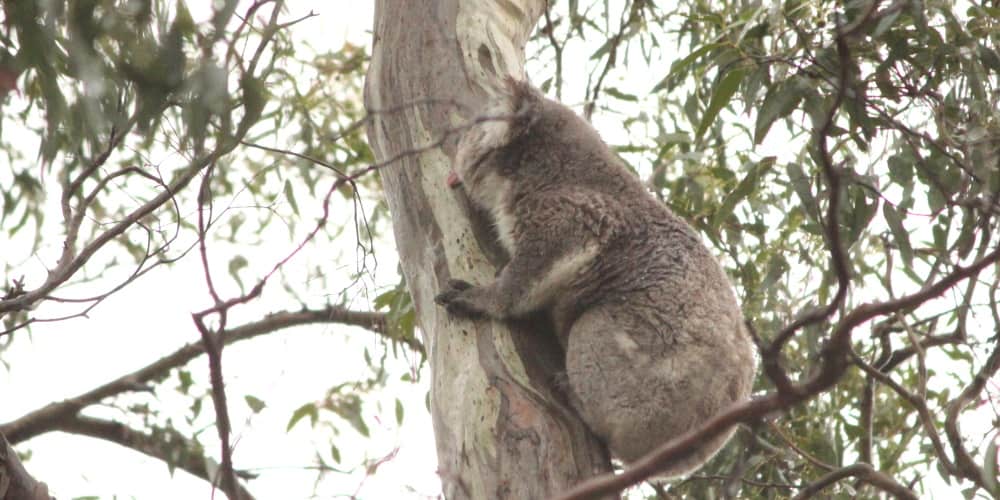 See videos of this behaviour below, and an older one here:

Ever used a ladder to get up a difficult tree? Koalas do too! Koalas are adept climbers, with powerful arms and sharp claws. But climbing some trees is difficult and takes a lot of energy, and so they use tricks to ascend. One of those tools is to find an easier tree with a smaller circumference to gain height, then move across to the larger tree.

This behaviour has been seen several times, and is interesting because it appears to be deliberate, is done without hesitation and is possibly a learned behaviour.

In October 2019, 14 yo female koala Pat was recorded using a ladder to ascend a very large Ironbark Eucalyptus tricarpa. She chose a small Ironbark growing adjacent to the large tree, climbed to the top, then made several attempts to transfer to the large Ironbark. She failed at first, so moved a few metres down the ladder tree, then tried again and succeeded.

Another older female koala Raini used a wattle as a ladder to climb a River Red Gum E. camaldulensis in July 2007. 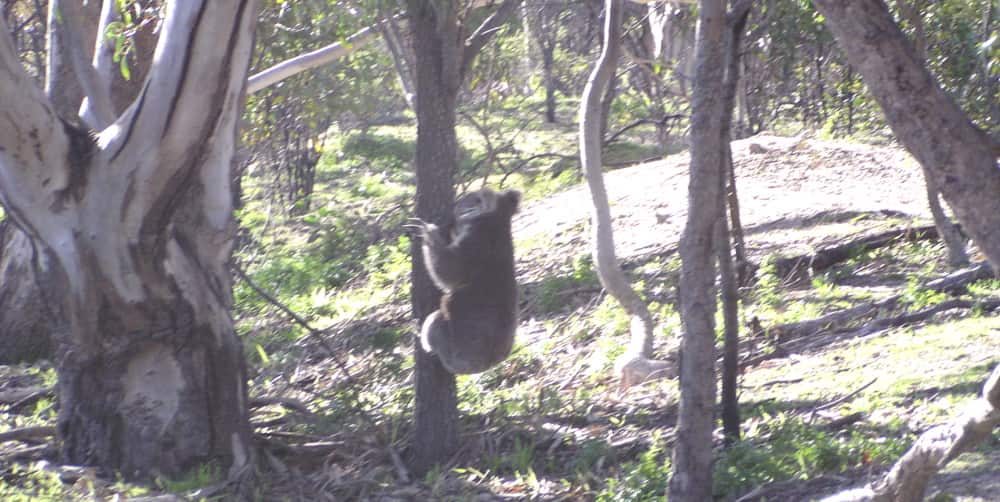 Koalas have also been seen using ladder trees to descend. But that could be seen as a clearly visible choice, whereas climbing a tree that you don’t want to be in, in order to get to one you do want to be in, is problem-solving.

In March 2019 mature female koala YuYu was seen climbing across from a very large Blue Gum E. globulus into a wattle, then climbing down to the ground. The day before her 2 yo son Bobo had been in that same tree, and had also used a wattle ladder to descend.  Read about our wild koala research project here.

Koalas are noisy, but yelling helps them keep the peace.

Anyone who lives near a koala forest in eastern Australia has heard the ‘mating’ calls of koalas, especially at night in summer. They are loud pig-like grunting snores, mostly uttered by males.

But those calls are not just mating calls, intended to attract females. They are a sign on the door.

Those calls give other males information – on the whereabouts of the caller, his size and fitness. Males use this information to avoid conflict, according to scientific research by Bill Ellis & a University of Queensland team.  Male koalas don’t want to fight, certainly not against males who might hurt them, so they listen to the calls, respond, and avoid bumping into each other. (Ellis 2015)

You see a koala in a solitary tree in a paddocks, miles away from a forest. How did it get there? Why is it there? Is something wrong with it?

Fact #4: Koalas use scattered paddock trees and can walk across open country 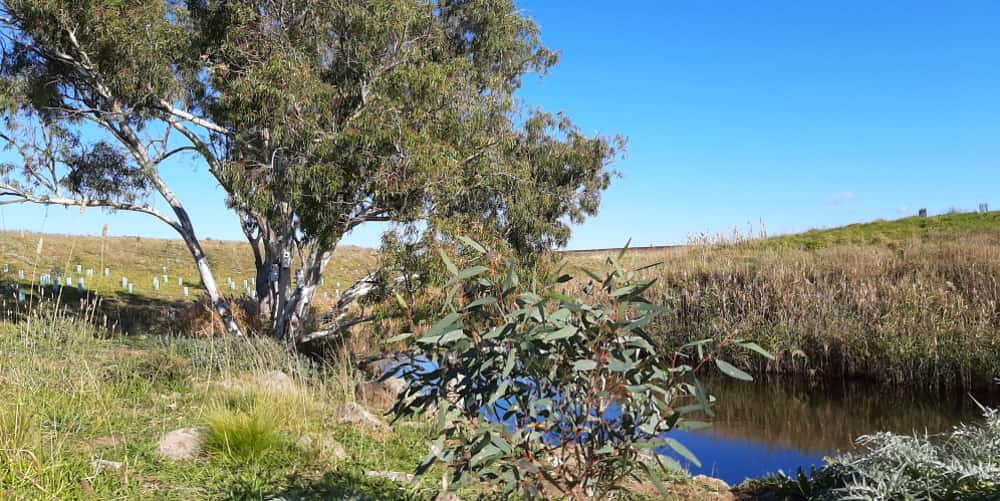 There’s nothing wrong with the koala sitting in an isolated paddock tree. Brand new koala science tells us that scattered paddock trees are a normal part of some koalas’ home ranges.

Most people rarely see a koala on the ground, so it comes as a surprise to see a koala sitting in a big isolated paddock tree, far away from any suitable forest.  But for koalas, walking across open country is not rare.  People don’t see it much, because they are not in the right place at the right time.  Many koala movements like this would happen at night.

Those paddock trees can be important habitat for koalas. A recent study by Ben Barth & his University of Queensland team found that koalas use those trees more than expected, and that some koalas seem to live in scattered paddock trees. (Barth 2019)

A scientific study by Rodney Kavanagh & Matthew Stanton on eucalyptus trees planted on farms in the Liverpool Plains, NSW found koalas feeding in trees as young as 2 years old. Those trees were still too small for the koalas to shelter in, so after feeding koalas moved to rest in mature trees in nearby remnant forest. By 7 years, though the trees were large enough for a koala to feed and roost in them all day. (Kavanagh 2012)

Those trees were nearly all River Red Gum E camaldulensis, which grows very fast. The majority of the trees planted by Koala Clancy Foundation are this species. Planting River Red Gum trees for koalas near the You Yangs

Koalas are fascinating subjects and new aspects of their behaviour are being updated every day.  But they need lots of research, because they are one of the 10 species, worldwide, most affected by climate change.  We need to know everything about them if we are going to have a chance of saving them.

To stay updated with the latest science and news about koalas, subscribe to this monthly newsletter Koala News & Science, written by the author of this blog, Janine Duffy: https://mailchi.mp/808fc4af1ee0/koala-news-science