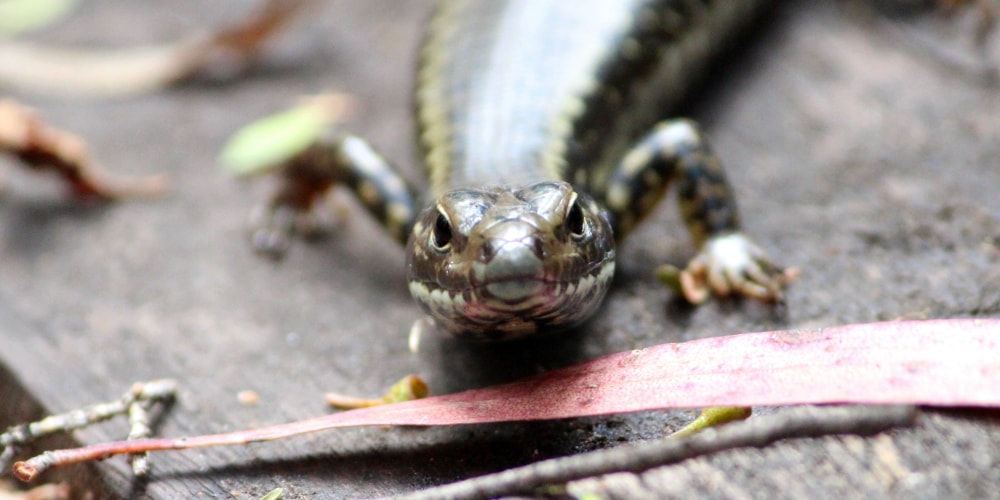 Lizards are a little wildlife gem often seen at midday in East Gippsland, when other animals are snoozing or hiding.

Our Wildlife Guides’ quick eyes pick up a rustle in the undergrowth, and soon find a shiny bronze Delicate Skink, or the humbug candy-coloured Copper-tailed Skink. But with over 430 species of skink in Australia (1), how do they know which one is which?

Read on for a guide to the common skinks & small lizards of the East Gippsland region. There are also many other skinks in East Gippsland – check this excellent blog for more.

Australia is the world’s greatest hotspot for reptiles (2) – there are more reptiles in Australia than in any other country. Australia is home to an extraordinary, highly diverse group of reptiles, and nearly 90% of our reptiles are endemic (found nowhere else).

SPECIAL NOTE: Don’t share exact locations of any reptiles you find, publicly. If you are submitting to online databases like iNaturalist.org (which we highly recommend you do) place the pin several kilometres from the actual location, and draw a huge accuracy circle. There is a huge illegal trade in reptiles taken from the wild and sold as pets. Reptile poachers are active everywhere, near cities and in some of the most remote places. Read more here. 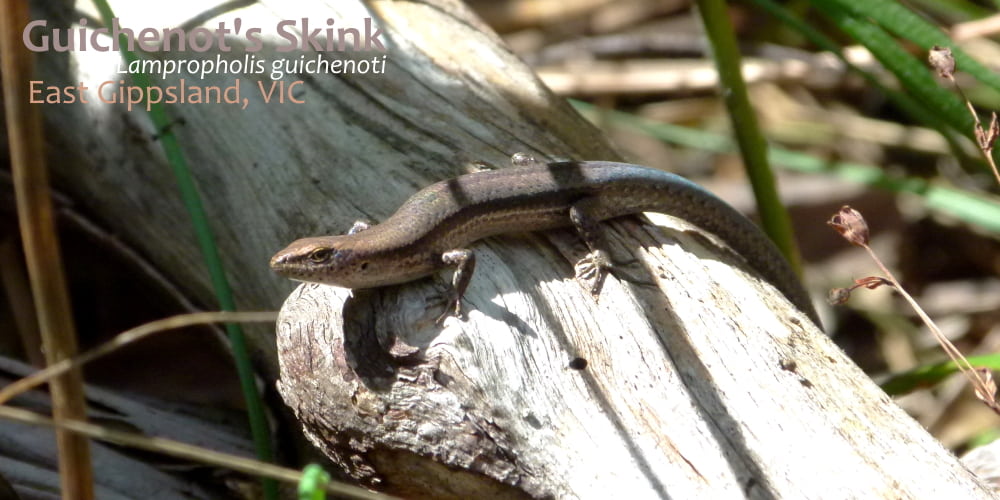 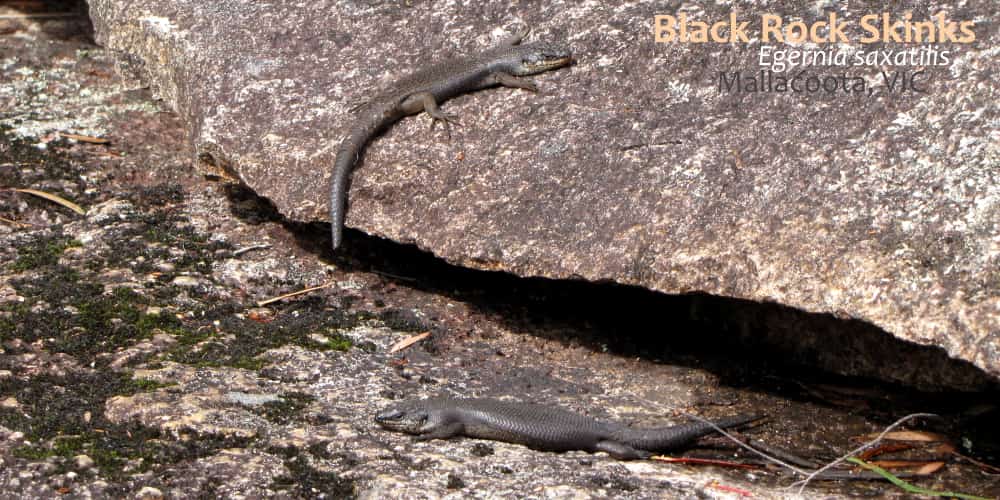 Skinks are a group (a family: Scincidae) of mostly small lizards. They are usually quite flat, with short legs. Their head looks like part of their body – like a snake, they have no neck. They are beautiful little animals, shiny, coloured in bronze and copper with stripes or spots of black and white. Skinks can be quite relaxed – some, like the Black Rock Skink or Yellow-bellied Water Skink will bask on tracks or rocks quite unconcerned by photographers. Many Australians have a species of skink in their garden.

Skinks are our most successful family, both in abundance and number of species. Over 430 species are currently described, with new ones emerging every day (1).

Why do some skinks have a funny-looking tail, or no tail at all?

Don’t try to catch skinks, and certainly don’t let your dog or cat try to catch them. If harassed, most skinks drop their tail as a defense mechanism. The still-wiggling tail makes a predator think they’ve got something, while the skink escapes, or may protect the skink from snake venom (2). But losing a tail comes at a cost to the skink – there is blood and fat reserves lost, they can’t run as fast, they are less attractive to mates. Tails can be regrown, but never look the same as the original tail – see pic below. Read more here 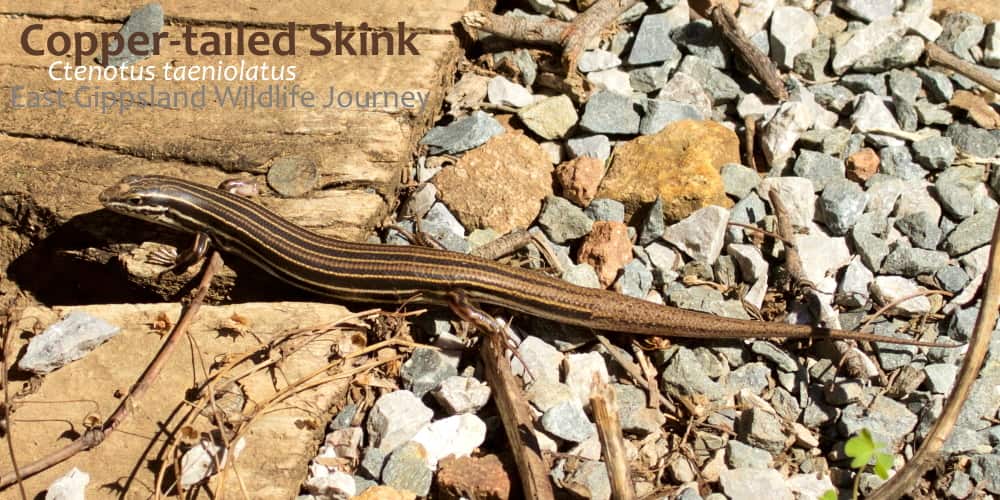 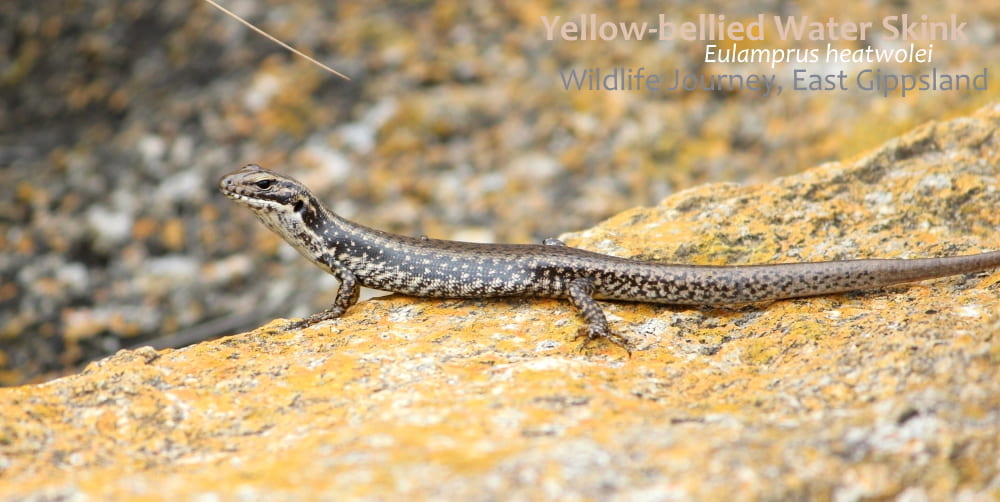 This is the skink we see the most.

Usually a very dark bronze and black skink with a cream to yellow belly. The back is glossy and shiny.

You can tell the Yellow-bellied Water Skink from the closely-related Southern Water Skink, which also lives in southern Gippsland, by these two identifiers:
– The anterior (front) edge of the ear opening is dark or partially dark, not pale as for Southern Water Skink, and
– There is a broad dark line from the nostrils, past the ear, all along the sides to the back legs. SWS usually has lighter face, and the dark line usually only starts from behind the ear. 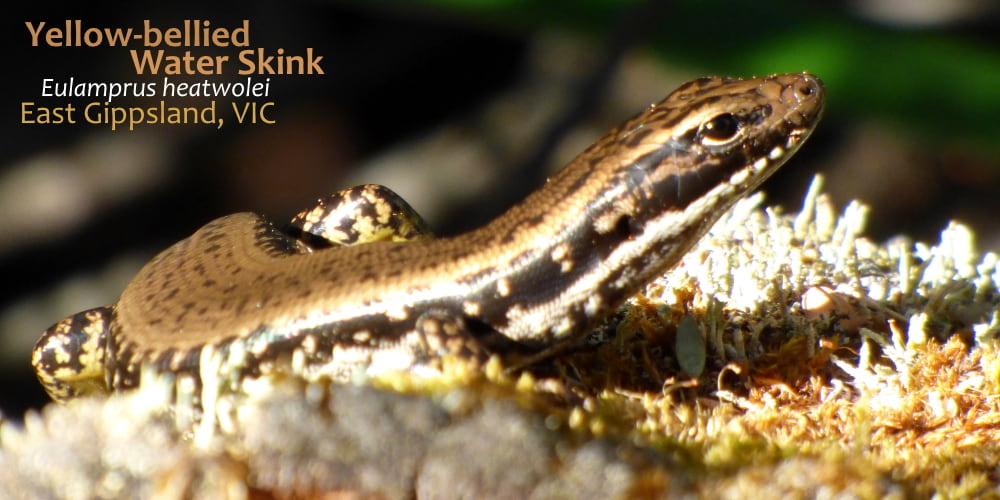 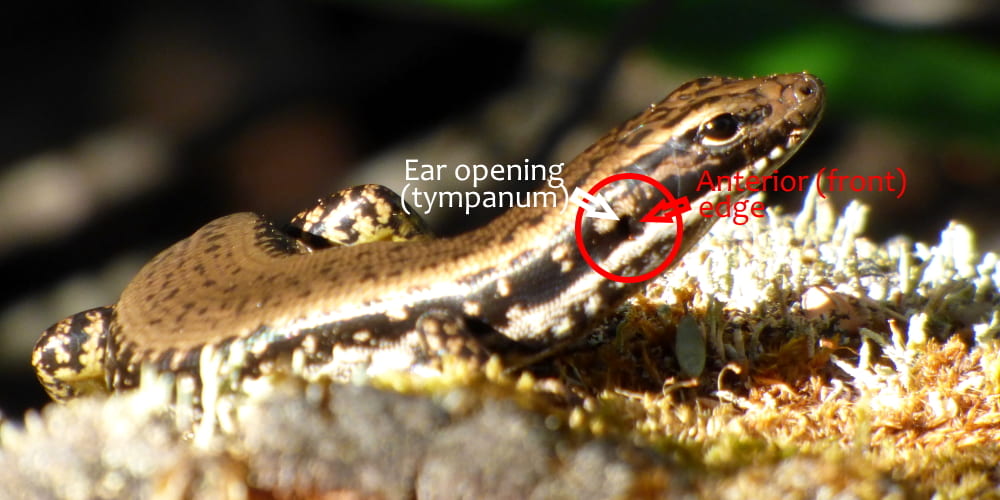 Can be found in all forested habitats, not always near water. 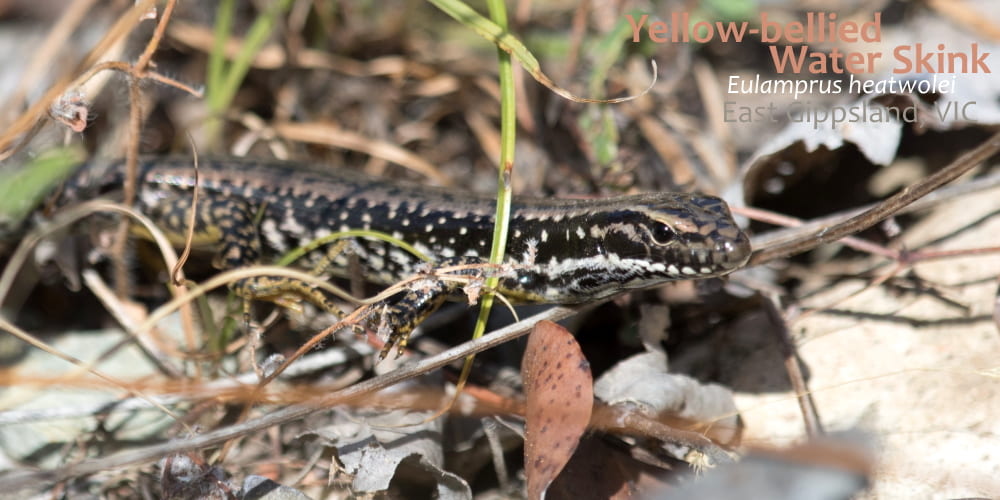 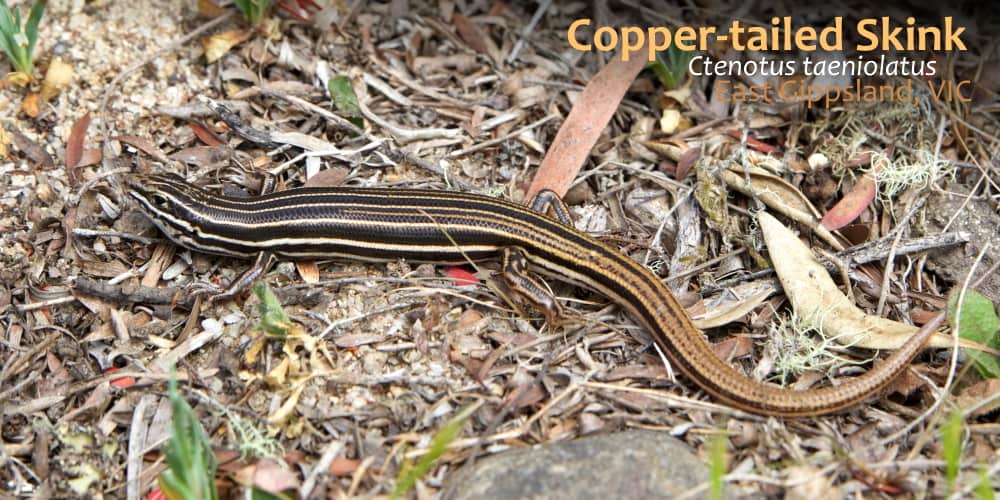 A very stripy, handsome little skink with a black-and-white front half, and red or bright copper tail. The tail is long.

We usually see this skink in the hills away from the coast. 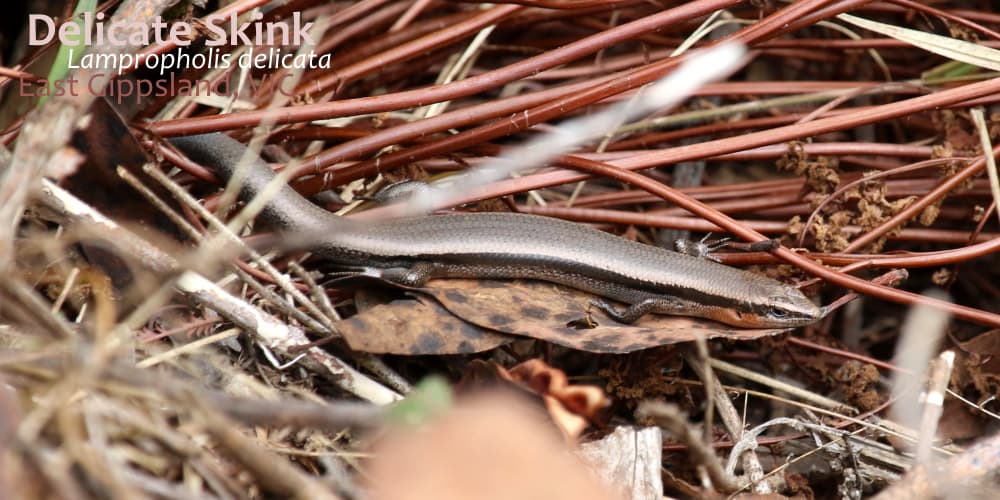 The Delicate Skink doesn’t have a dark stripe down middle of back (vertebral stripe). Usually has stripe along sides.

Usually has a strong or weak dark stripe down middle of back (vertebral stripe). Has stripes along sides. 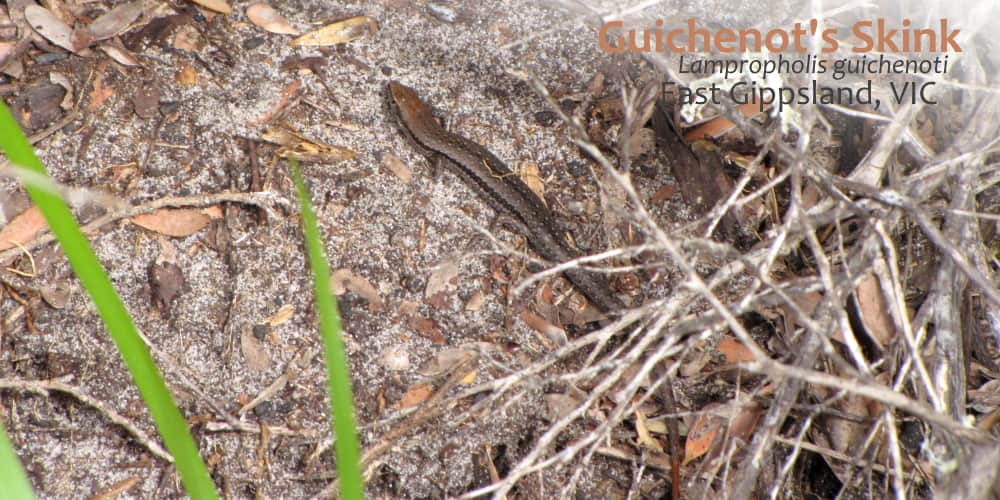 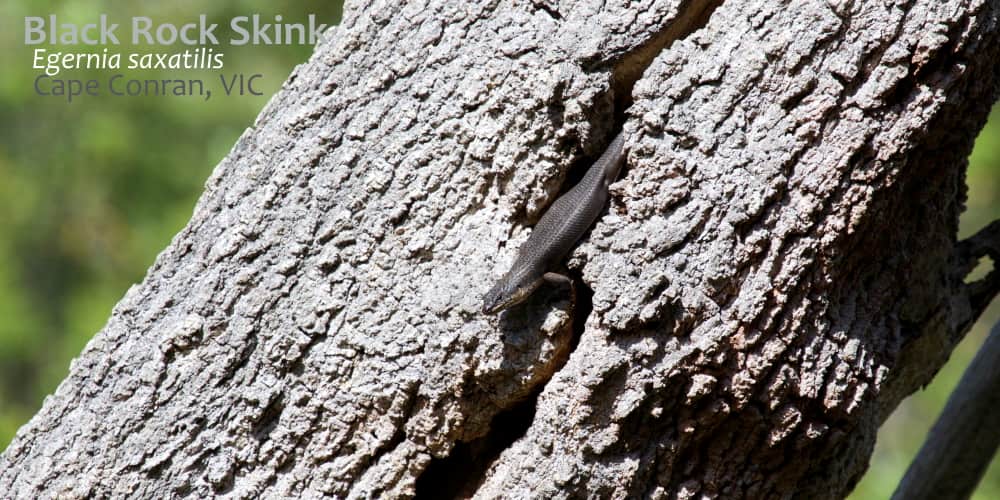 Dull brownish or sooty black (not shiny-smooth) with white barred upper lips. Their back scales are keeled – that is, they have a little raised ridge on each scale. 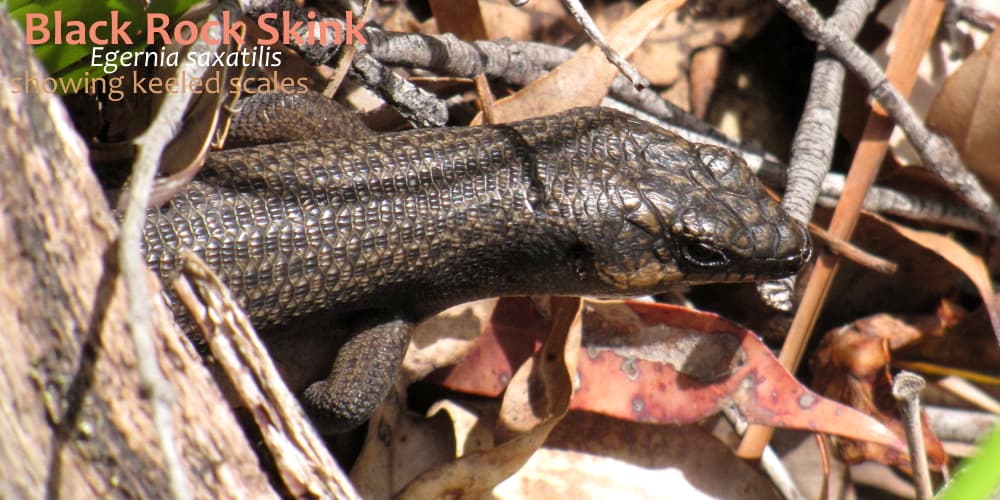 This small lizard can be seen in most rocky areas in East Gippsland, but also in trees or on logs. 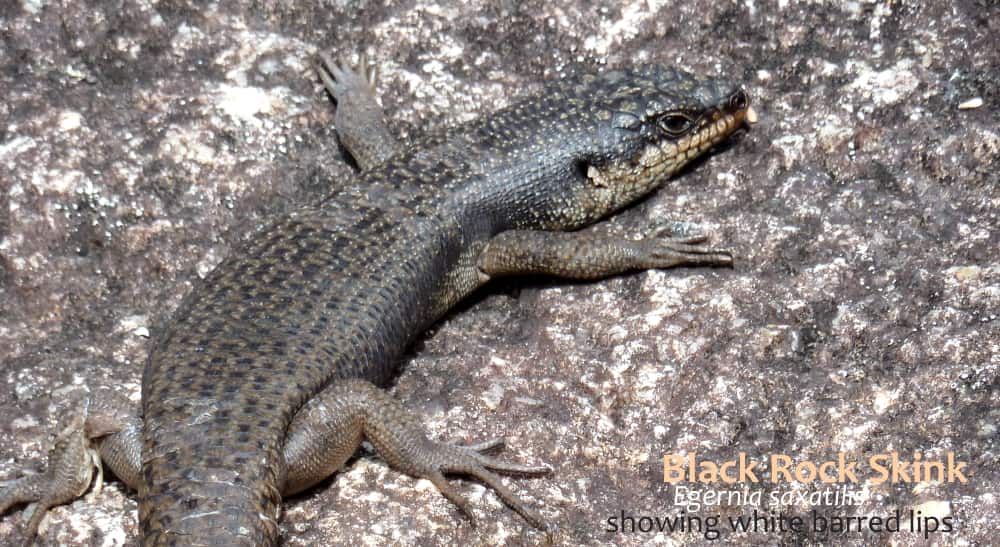 Key to identifying the small lizards of East Gippsland:

– Does it have a strong or weak dark vertebral (middle of the back) stripe? 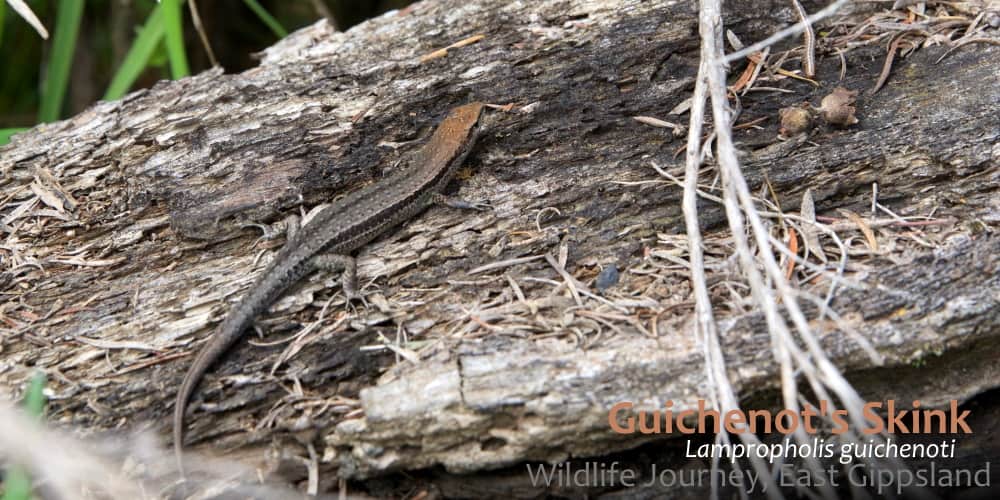 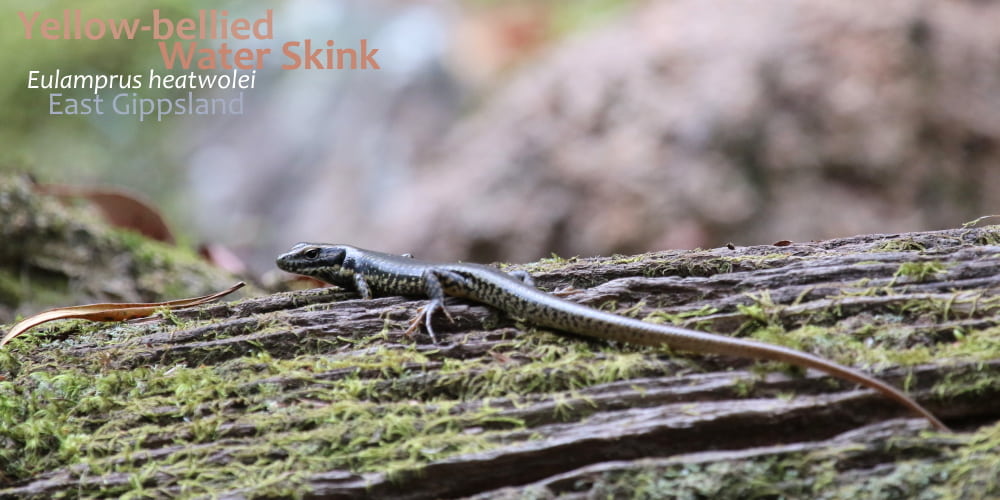 – Does it have stripes on sides and back?

– Is it stripy or blotchy?

Yes: – Does it have several thin white stripes along its back?

– Does it have really long back legs, an upright posture, spiky scales and a triangular head with a little crest?

Yes: its not a skink, its a Jacky Lizard Amphibolurus muricatus. 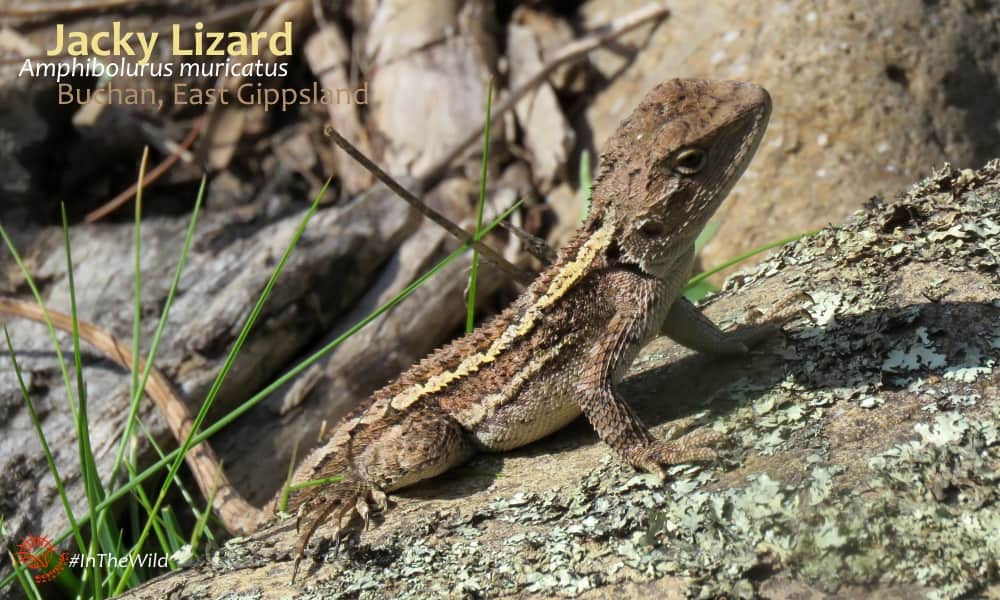 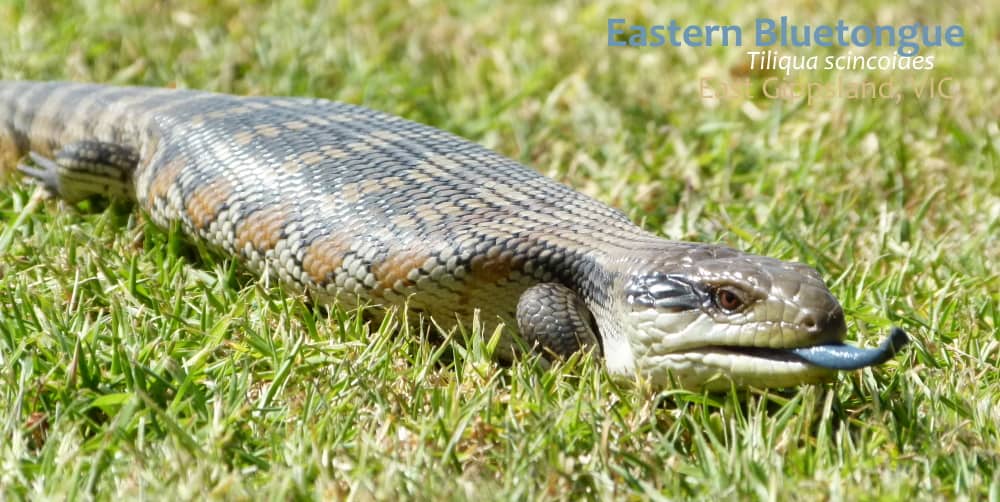 Bird names are a bit like the English language – a lumpy soup of broken rules, throwbacks, dialects and slang. Some birds are named for their appearance: Tawny Frogmouth, White-throated Needletail.

What do children do if they don’t have toys? They make them! Baby animals are just the same as human children in some respects. They play with what they have.

One Degree for Koalas #1degree4KC

There’s something you can do right now that will help save a koala’s life.   Go to your...
Read More

Cuckoos are cool. They are that guy at the bar who doesn’t mind being alone. But when he sings,...
Read More