Colourful Birds of Australia: Scarlets and Crimsons of Mallacoota 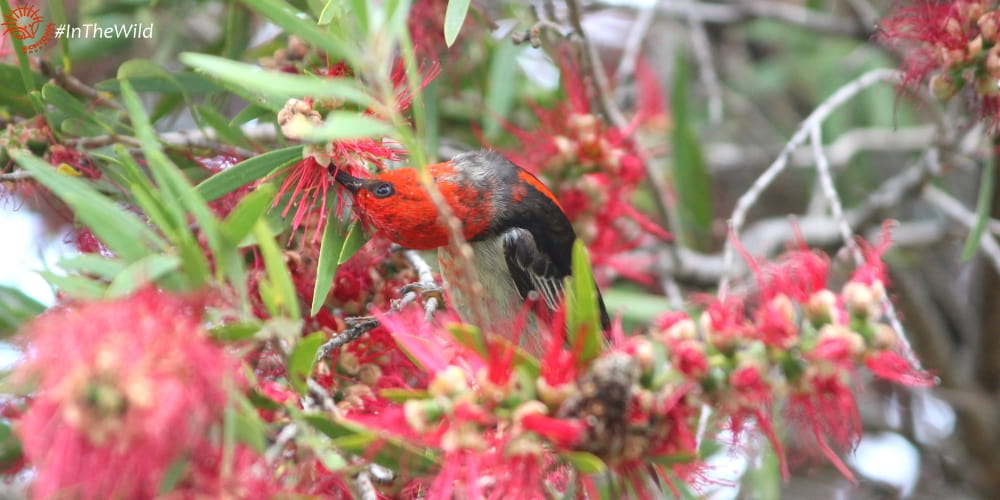 It’s a sight we never tire of.

Years ago, a tiny colourful red bird flew into a tree by a picnic table beside Mallacoota Inlet, Australia. We were having sundowners with a tour group from Canada, and we couldn’t believe our luck. Everyone was so excited. Back then, Mallacoota was the only part of Victoria Scarlet Honeyeater birds visited, and only in summer. 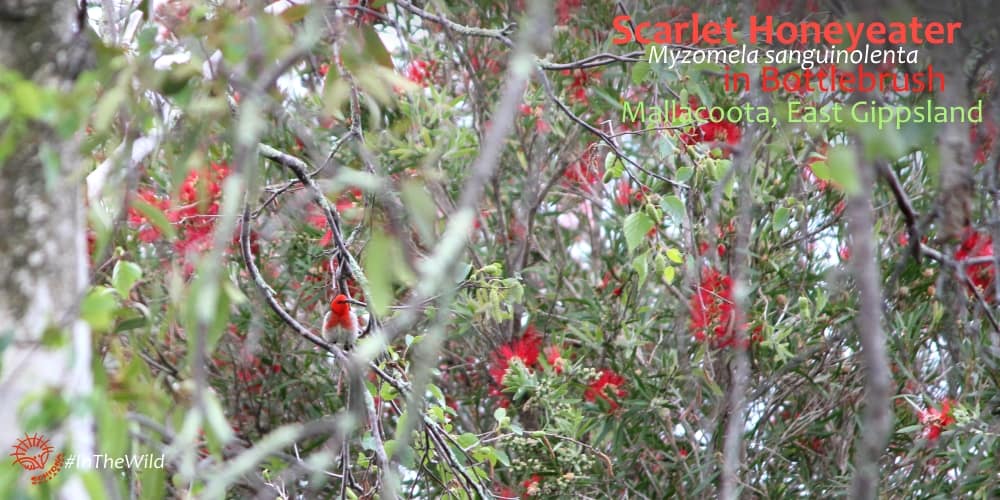 Now they are becoming a common bird in Mallacoota, from spring to autumn. They are even venturing as far west as Melbourne.

To give you some idea, in the ten years 1988 to 1998 there were only 10 records on eBird of Scarlet Honeyeater Myzomela sanguinolenta  in the whole state of Victoria in southern Australia. All were around Mallacoota in the far east, and 9 of them were between November and January. In the ten years from 1999 to 2008 there were 31 records of Scarlet Honeyeater in Victoria, ranging as far west as Morwell, but most were still in East Gippsland. 18 of those were from November to January, with some records as early as August, and as late as March. 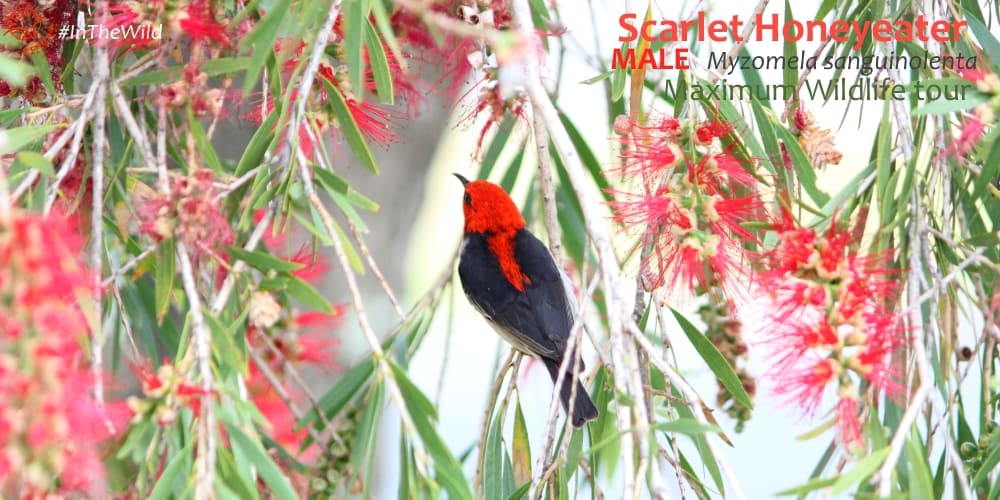 In the decade 2009 to 2018 there have been over 1000 records of Scarlet Honeyeaters in Victoria, from as far west as Beaufort. In 2018 in a small area around Mallacoota alone there were 41 records.

Why are Scarlet Honeyeaters moving south?

Many species of birds are moving south due to climate change. Scarlet Honeyeaters, Australasian Figbirds, Brown Cuckoo-doves, Topknot Pigeons, Eastern Reef Egrets, Beach Stone-curlew, Eastern Osprey and Channel-billed Cuckoos are being seen more regularly in East Gippsland than ever before.

This is in line with predictions. On average, land animals are moving south (in the southern hemisphere) at 17km in a decade *(1). This is due to a combination of factors – heat and dryness, lack of food in their normal home range, increased availability of habitat and food in southern and mountain areas.

Though it is fun for us to see them more often, the reasons why it is happening are of serious concern.  We know that at the other end of their distribution they are being seen less often, and overall, their numbers are declining – which is a tragedy.  Read more here.

Last November, Scarlets were the most common small honeyeater in Mallacoota town. All around we could hear their delightful little call. They buzzed around the tops of the gum trees, joining other colourful birds including gorgeous Crimson Rosellas, orange and black Eastern Spinebills and Black-faced Monarchs, green and red Olive-backed Orioles and King Parrots.

Australia has many colourful birds, from the Outback to the coast, and you can see many of them in 21 days. 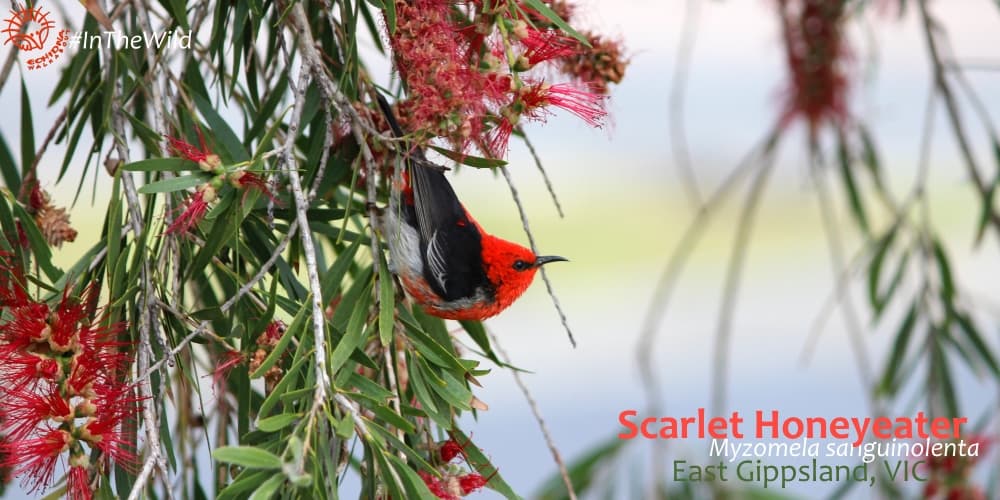 East Gippsland is the natural home of one of the world’s most beautiful bottlebrushes – the Crimson Bottlebrush Callistemon citrinus. This beautiful shrub was first taken to England to be shown off in 1789.

You can see Crimson Bottlebrush growing wild throughout East Gippsland. You can also see other species of callistemon planted in gardens in Mallacoota, Cann River and Orbost. 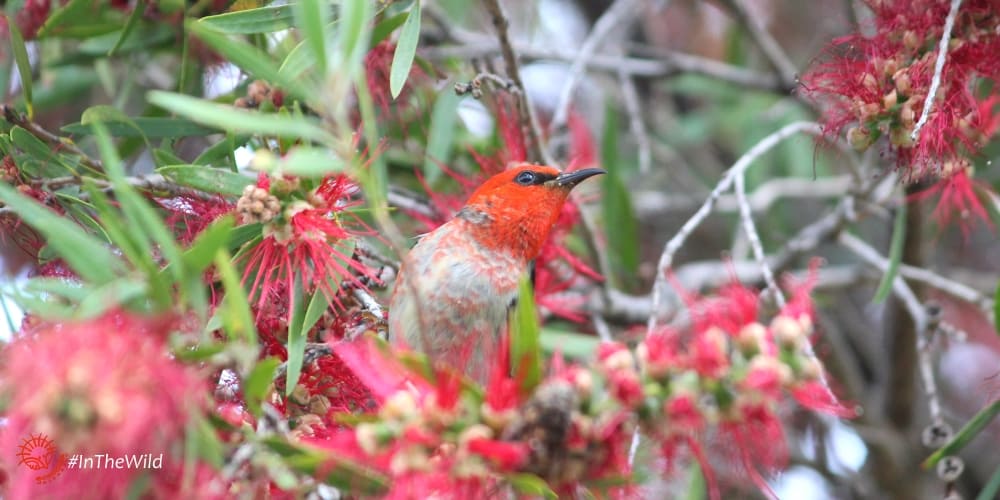 Great photos and identification tips at this site: https://www.graemechapman.com.au/library/viewphotos.php?c=268&pg=1