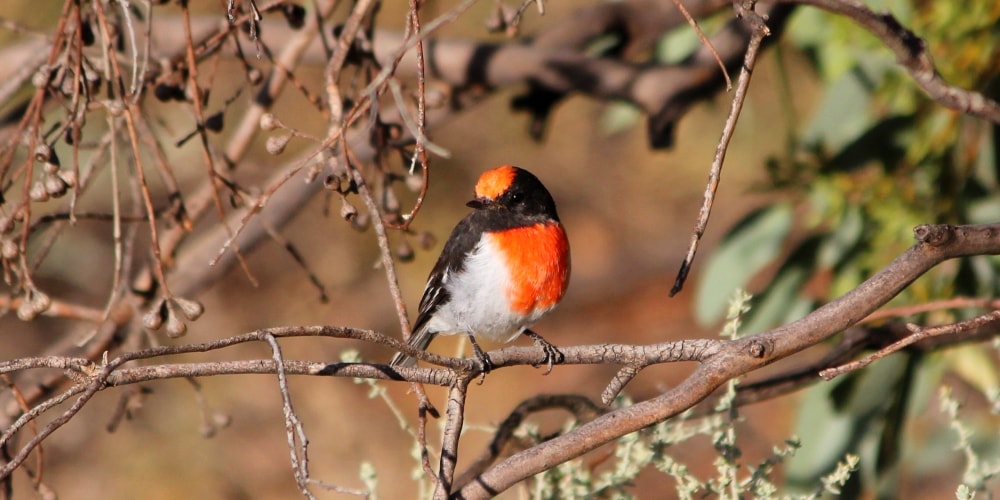 Some of the most charming little birds of Australia, Australian Robins are perch and pounce insect-eaters that are familiar to most backyard gardeners and farmers. They will use a favourite perch over and over – darting to the forest floor to snatch an insect, then flying back again. For wildlife photographers, they are a delight. 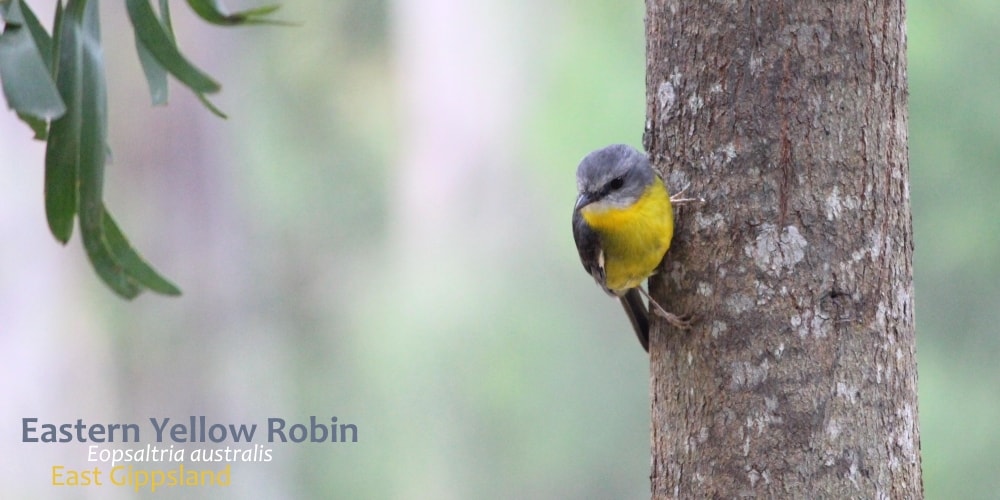 This group of birds were named ‘robin’ because some have red and pink breasts, superficially similar to the red-breasted European Robin. However none of the group are closely related to the robins of Europe or North America.

Australian Robins are handsome with breasts of lemon yellow, scarlet, pink or orange, with a grey, black or olive back. Many have white outer tail feathers and a white band in their outstretched wings.

We see up to 9 species of Australian robin birds on our 21 day Maximum Wildlife tours. A flash of brilliant colour in the soft greys and greens of the southern forests: the pink, orange and red-breasted robins of the Petroica genus. There are 11-13 species in this group, distributed in Australia, New Zealand and New Guinea. We regularly see four on the Maximum Wildlife tour, and occasionally see a fifth: the Pink Robin.

The name petroica is from greek petros = rock; oica = home, originally given to the Norfolk Robin of Norfolk Island. 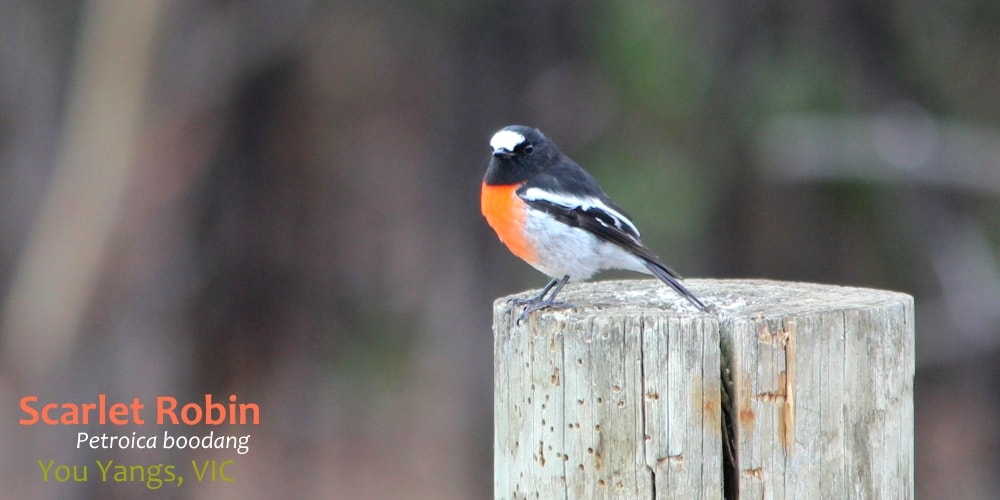 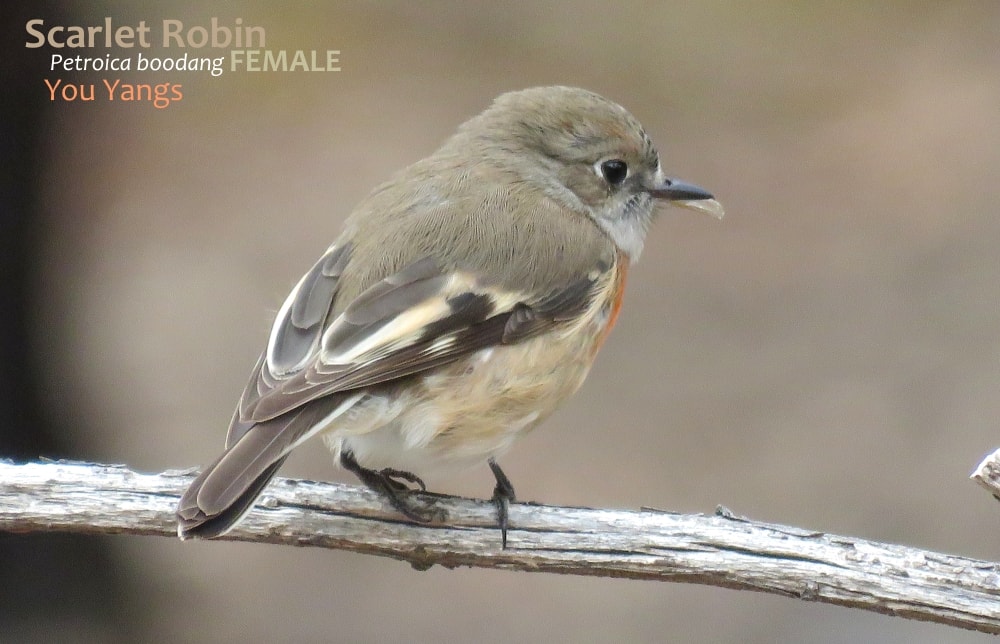 The male Scarlet Robin is a little stunner. His breast is a deep clear red, set off by his striking black and white back and head. The female is a browner version.

Regularly seen in the You Yangs and Great Ocean Road, occasionally seen in open forests and farmland in East Gippsland. 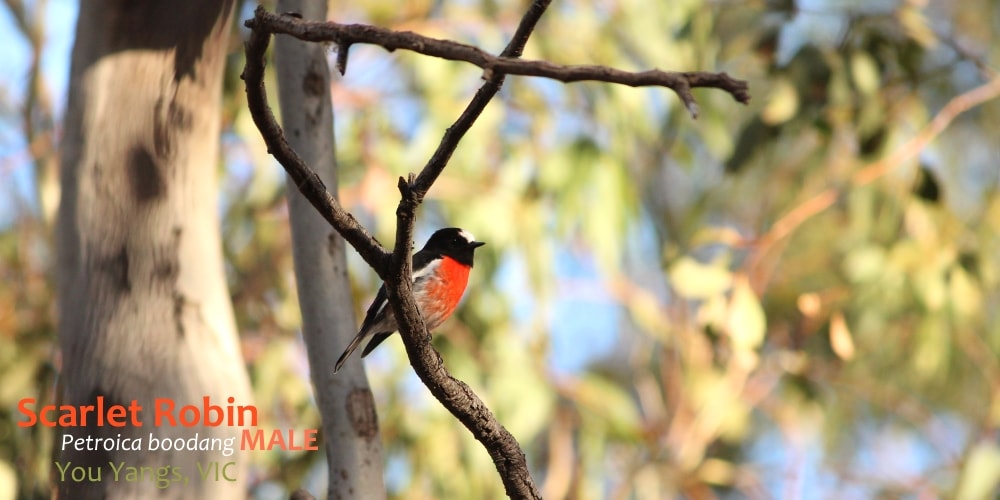 We love seeing another Scarlet in East Gippsland: the Scarlet Honeyeaters of Mallacoota.

Red? You thought that Scarlet Robin was red? Well this little guy takes the whole red thing a step further. Red breast – tick. Red hat – tick. He’s only small, but he is bright!

Red-capped Robins are the desert cousins of the Scarlet Robin – more at home in the dry Mallee and Mulga forests of Australia’s Mungo Outback.

Robins are not the only colourful birds we see on this part of the Maximum Wildlife tour – read about the colourful parrots of Mungo here. 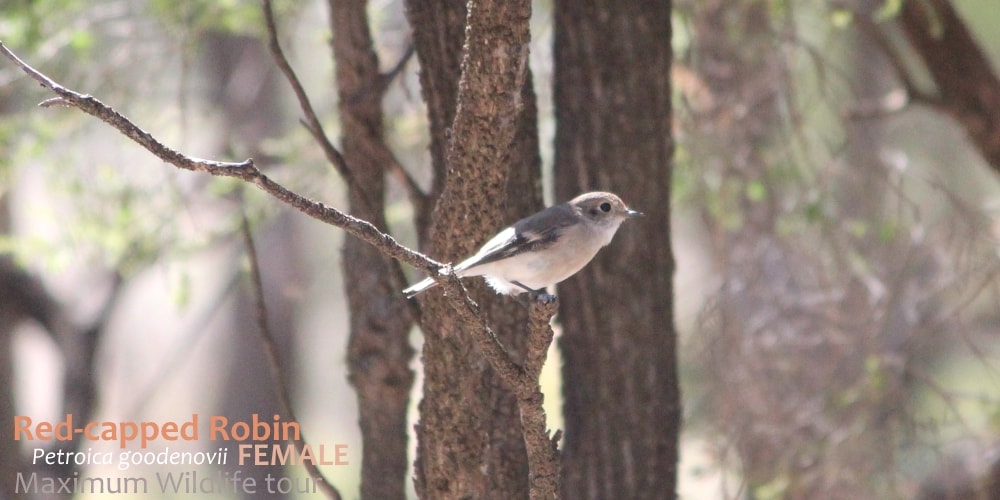 Not to be outdone, the male Flame Robin takes the red breast a step further – the brilliant vermillion stretches from his chin to his lower belly. His head and back are grey, not black, and he has a more upright posture and larger size than his red robin cousins.

“I’m going to East Gippsland” is our interpretation of the song of the Rose Robin. Listen below.  This little beauty is a real highlight of the dense forests and rainforests of Victoria’s wilderness corner.

This tiny fellow is not at all afraid to wear a pink tie with his smoky grey suit. 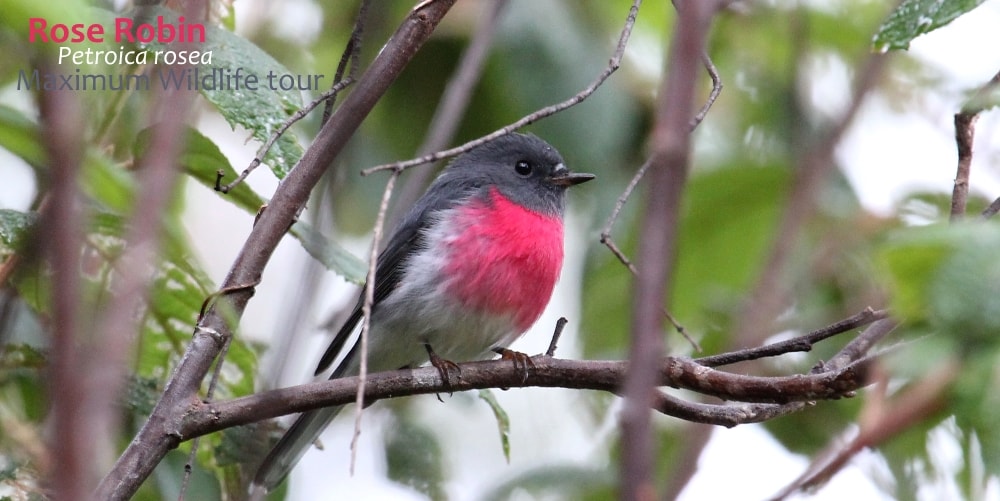 We only see this beauty rarely, mostly in the wet forests of the Great Ocean Road. 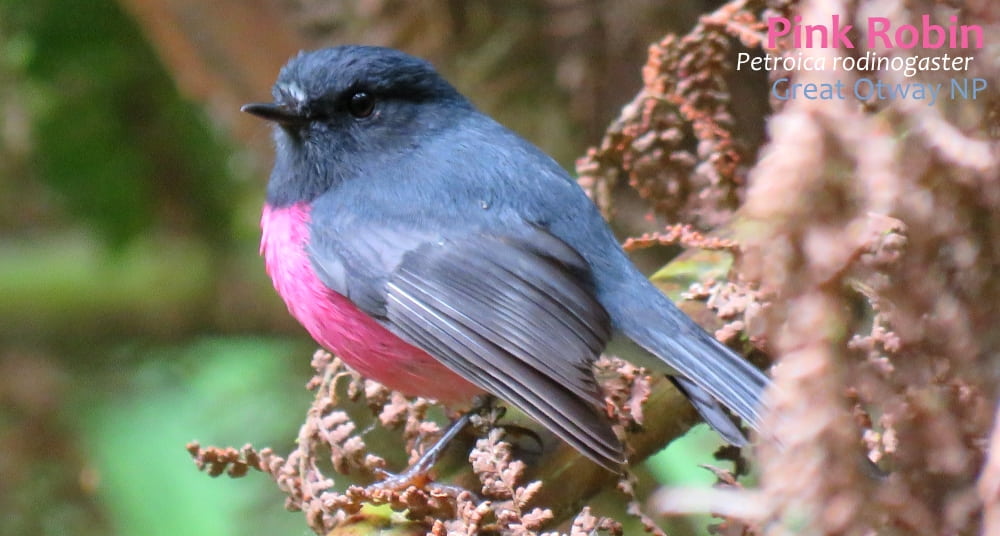 Eopsaltria means dawn singer in Greek. This genus is under some debate – with some sources including only two species (IOC), others listing five (Clements/eBird). Males and females are similar. We see one species – the Eastern Yellow Robin – regularly. A cheeky, perky little bird loved by Australians, the Eastern Yellow Robin lives in the forests nearest to the populated parts of Australia: Melbourne, Sydney and Brisbane.

Their bellies are such a cheery shade of sunflower-sunshine yellow, and they are so calm and easy-going, that backyard gardeners really feel a kinship with them.

We see Eastern Yellow Robin birds in the You Yangs, Great Ocean Road and East Gippsland. Melanodryas: means black (melanos) tree nymph (dryad) – a name coined for the black and white Hooded Robin. The Dusky Robin of Tasmania is also in this genus.

A striking beauty that needs no colour – Hooded Robin male birds are black-and-white and females are grey and white. Like the Red-capped Robin, they prefer the lightly-timbered open countr of the Outback.

We see Hooded Robins at Mungo. 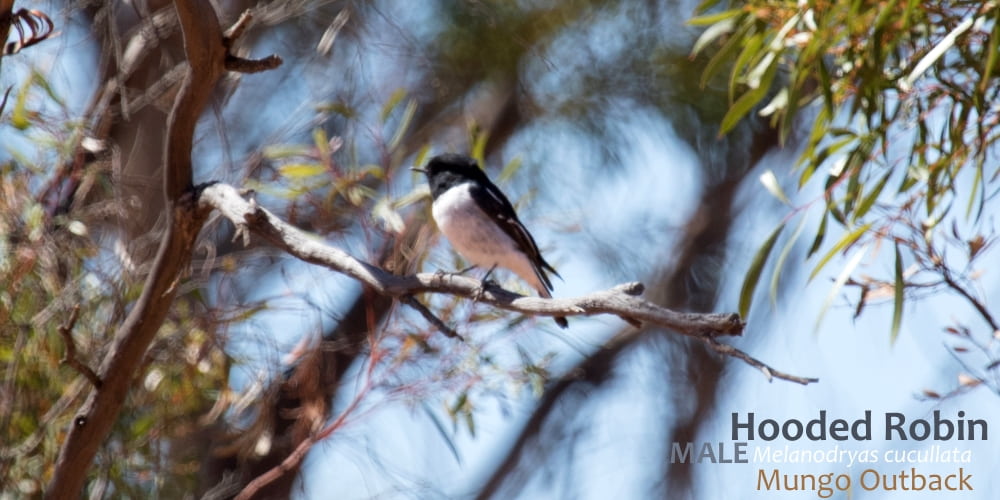 A group of grey and lemon-coloured Australian robins, some called flycatchers, another called Jacky Winter. Some are suggesting we call them all flyrobins. We see two of the three species (or 6 species Clements/eBird – the others are in New Guinea and the Tanimbar Islands near Timor Leste). Mikros = small, oikos = house, related to the very tiny nest of the Jacky Winter. Named for their call, which some interpret as jacky-jacky-winter-winter. Listen below.   We do often see them in winter and early spring in southern Australia. They are plain brown and grey, but appealing – they tend to perch prominently on a fencepost or wire, which makes them lovely photo subjects.

We can see Jacky Winter in the You Yangs, Great Ocean Road, East Gippsland and Mungo. This species also occurs in the Top End and New Guinea. 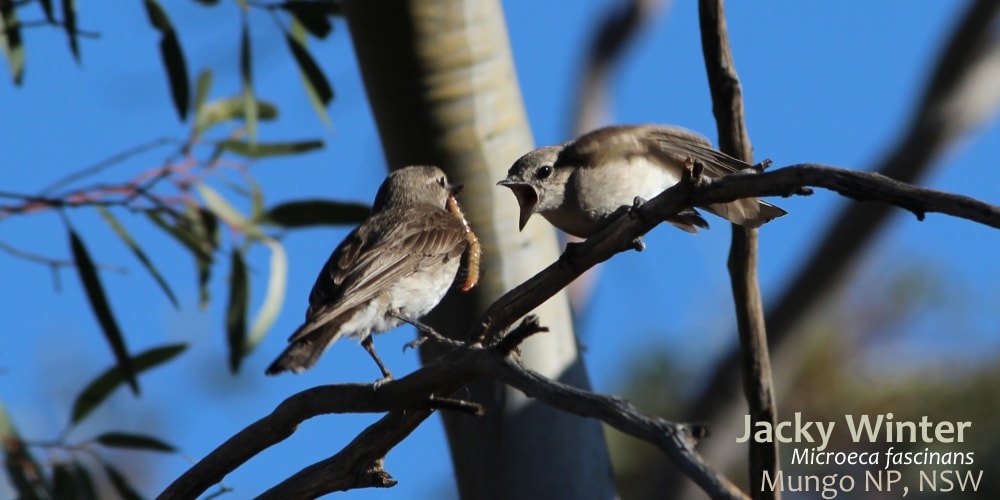 A very sweet little bird, seen frequently in Top End monsoon forests in places like Fogg Dam and Jimmy Creek, Mary River National Park. I hear their song as jacky-jacky-no-winter! Listen below.  Of course ‘winter’ in the Top End is not really winter at all – it is hot and dry.

We see Lemon-bellied Flycatchers in the Top End, Northern Territory. They also occur in Qld, WA and New Guinea.