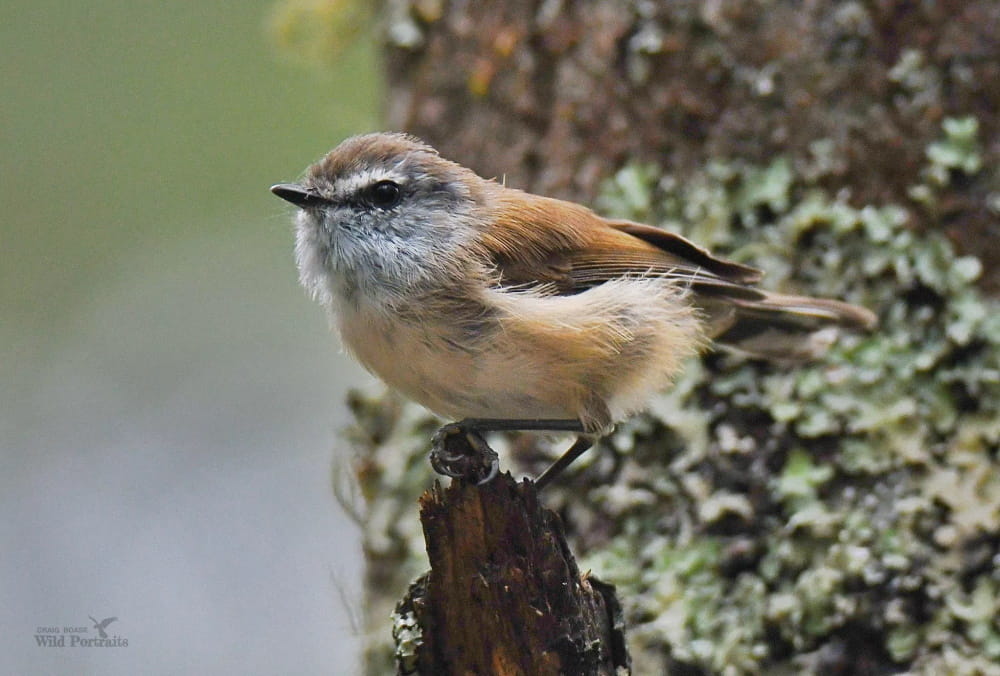 Four days, 43 birders, 151 bird species, 3 boat trips, $1275+ for bushfire recovery, a truckload of fish & chips and quite a few bottles of wine… this was the second annual Mallacoota Birders Big Weekend over Labour Day Holiday, 5 – 9 March 2021.

We were so busy! There were activities every day, including organised walks in Cann River, Shady Gully and on the north side of the Inlet, welcome drinks at Captain Stevenson’s Point, a workshop about eBird and a spotlighting walk/drive. Some participants did their own thing, making use of maps and walk notes created by the organisers. All weekend we had our phones pinging as great sightings flooded in, and terrific camaraderie. New birders were adding Eastern Bristlebirds & Glossy Black-cockatoos to their first eBird lists, one Big Year candidate added 24 species to her list, and experienced birders were adding data to recovery status of endangered species. 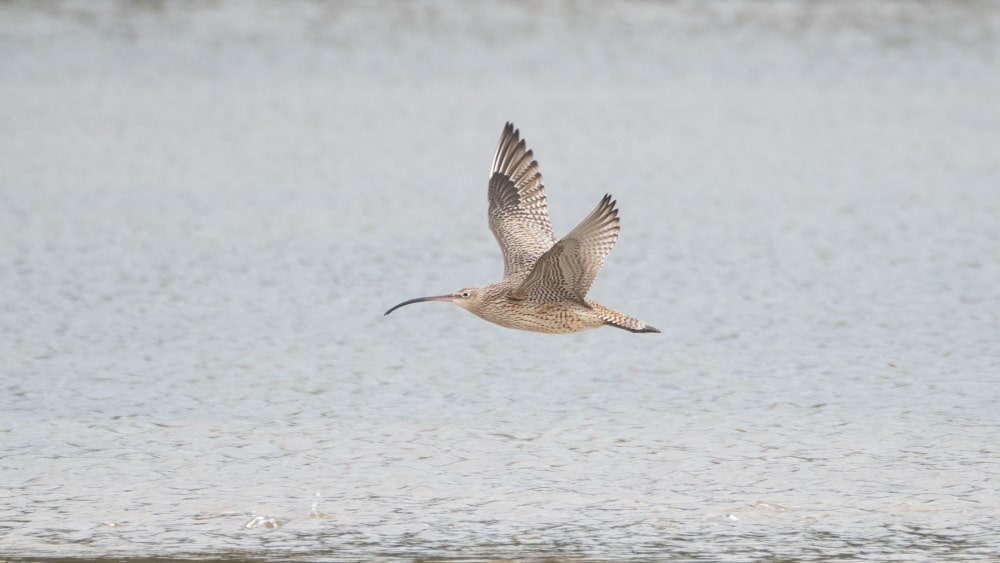 Did we see birds? Oh yes we did. A normal 4 day weekend in early March would expect around 88 species submitted to eBird. Our Big Weekend reported 151 species – an increase of 72%. In essence, being part of a group effort meant that participants saw, on average, 72% more birds than they would have if travelling alone (depending on their skill/expertise of course). Click here for a full list of birds seen:  Google Doc Mallacoota Big Weekend 2021 Birds 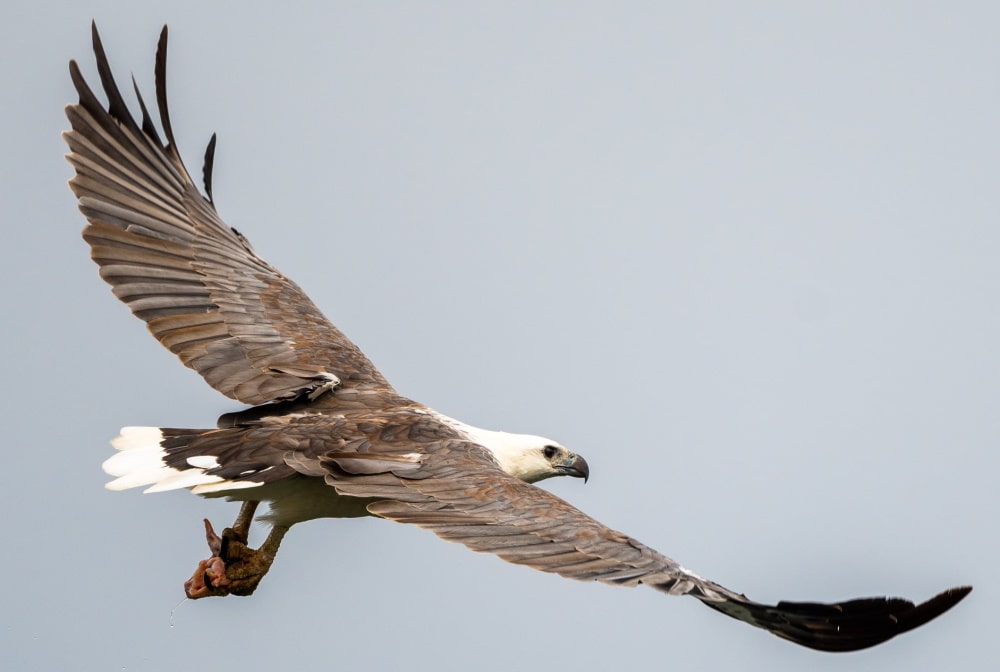 We set up a Mallacoota Birds What’s App group, and it was fun – several times a day the phone would ping, as another interesting sighting came through. The great benefit of What’s App is the ease of giving a real time location pin, and no-one can see it except the group members. We tried to limit ourselves to locations of sought-after birds, but a few posts popped in about flat tyres, changes of plans, lost binocular eyecups and the opening status of the bakery! 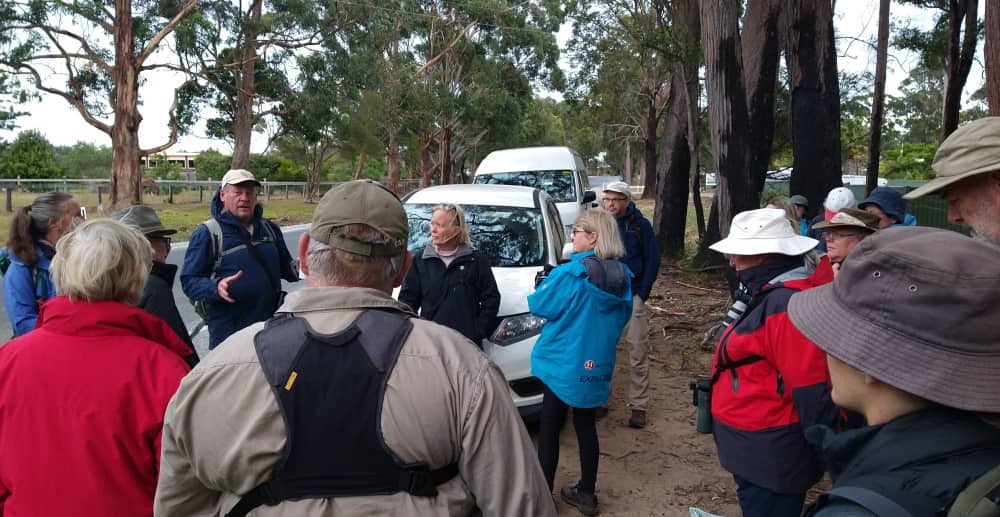 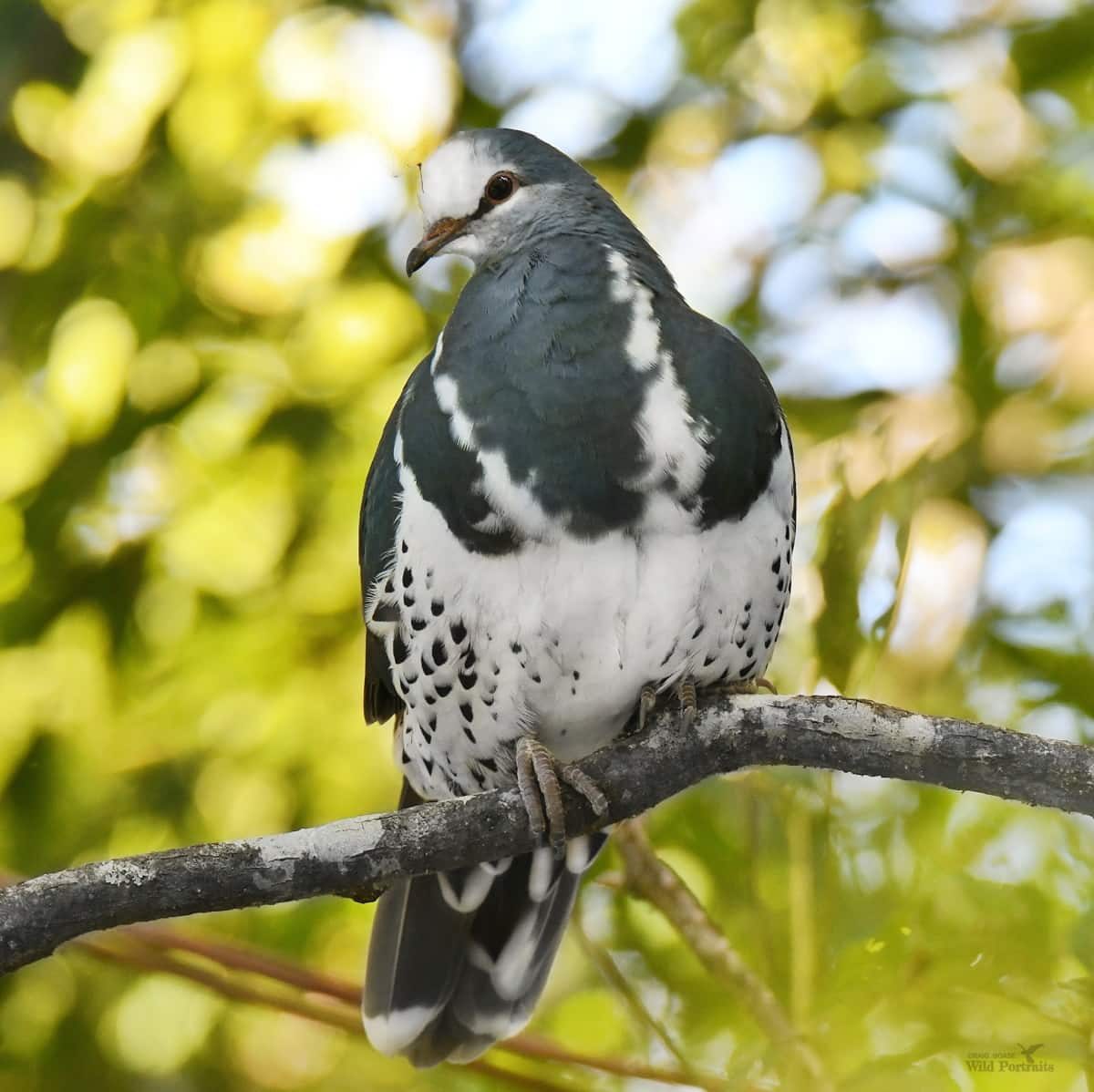 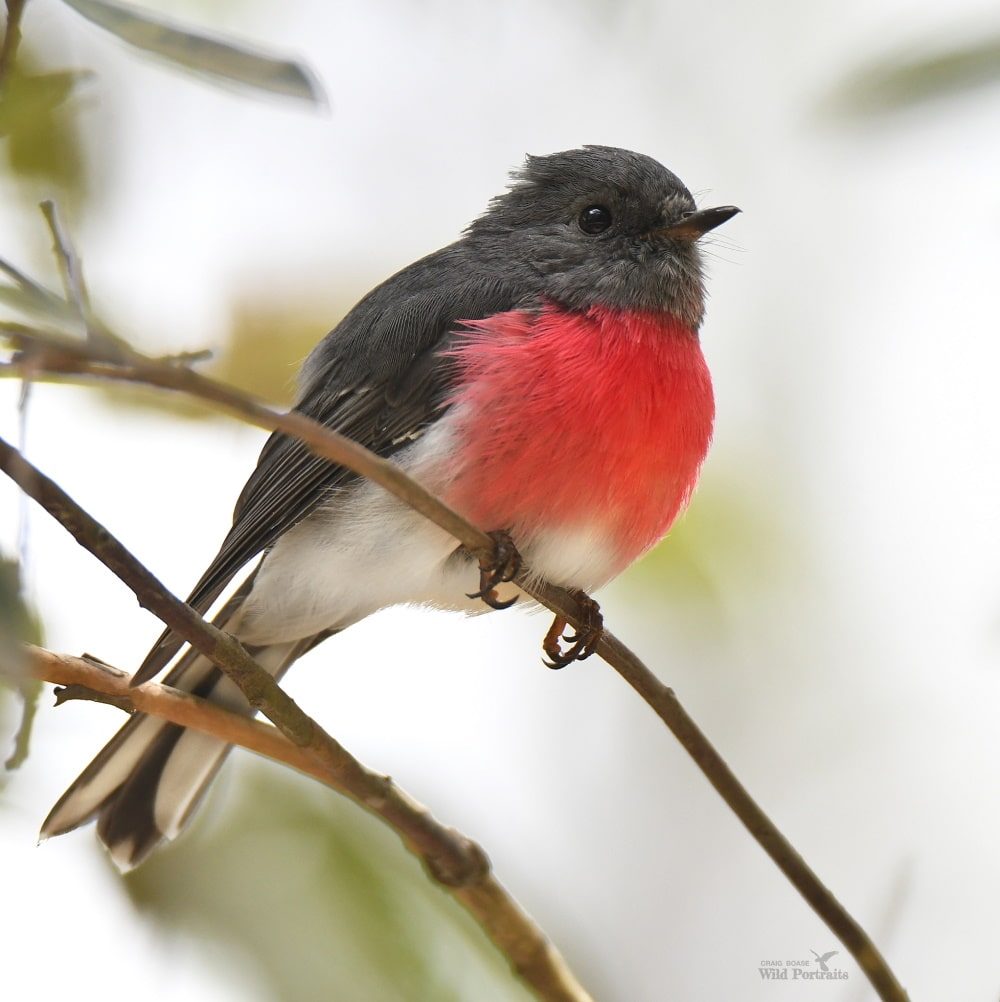 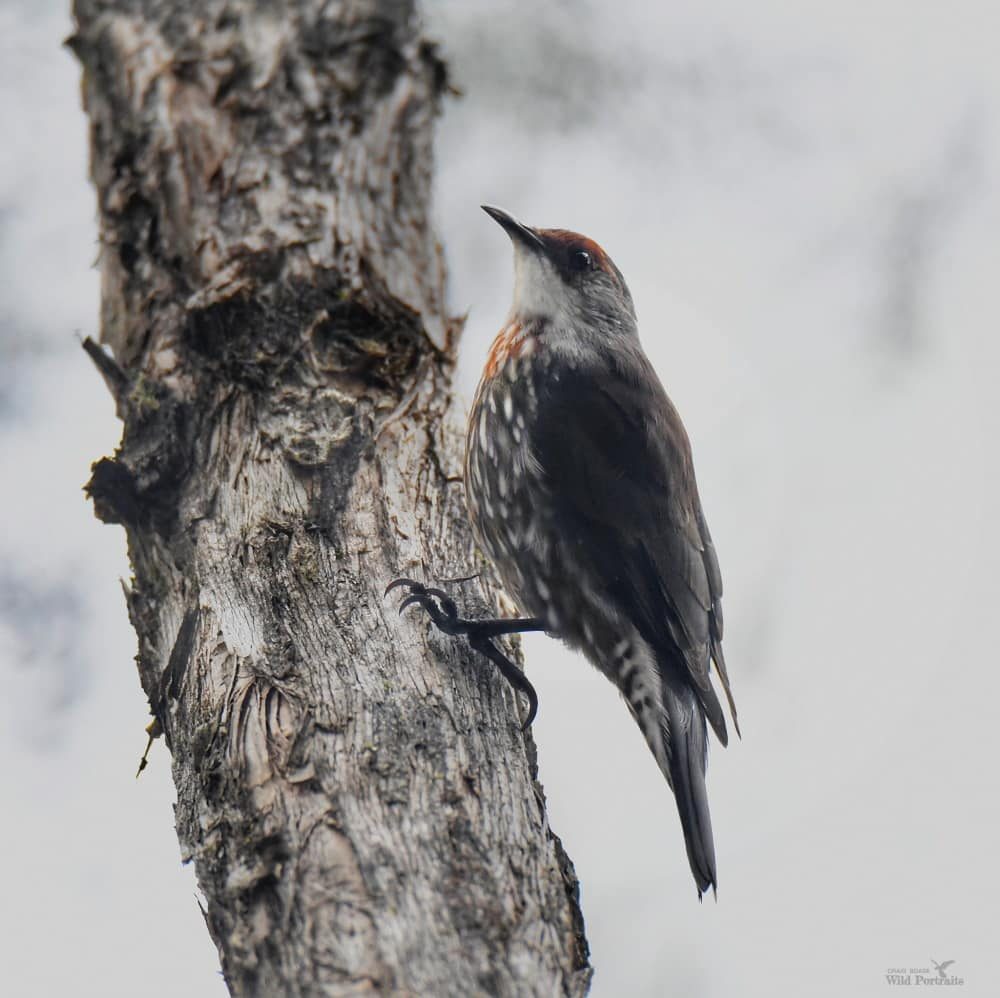 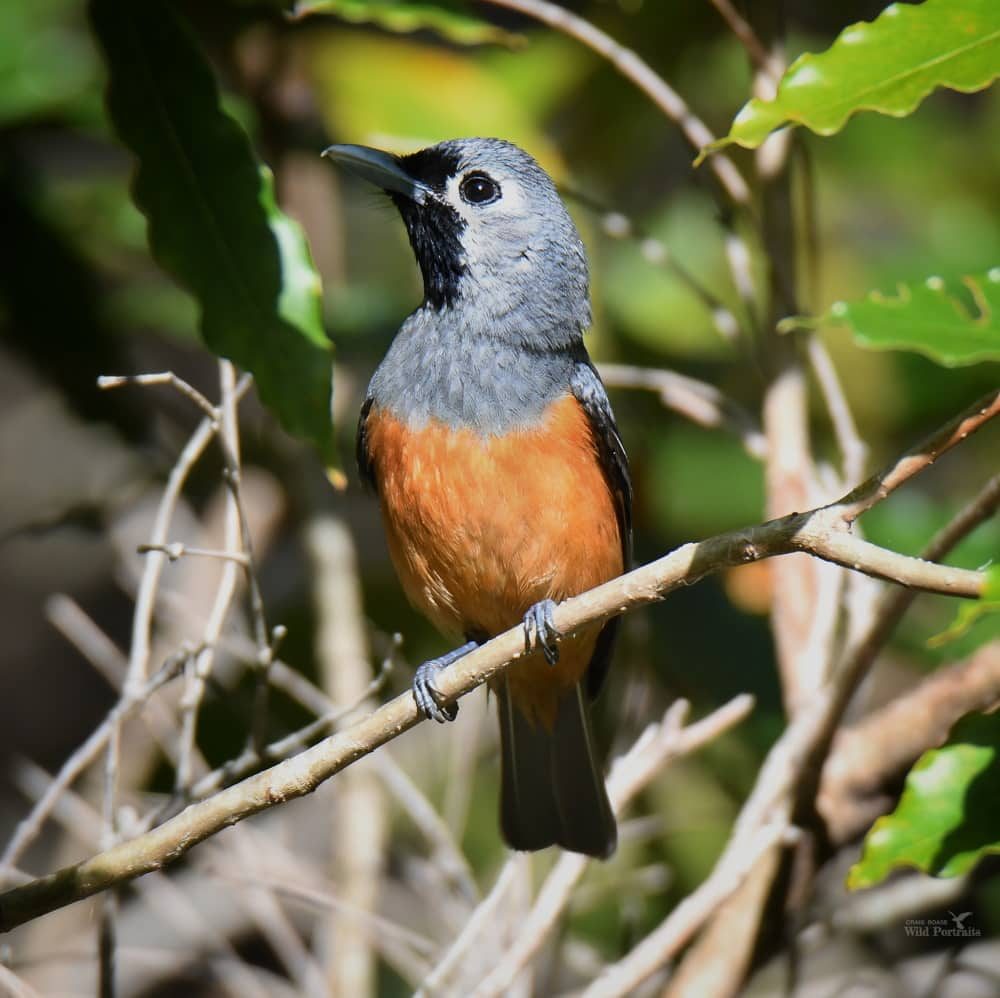 The highlight for me was my first Eastern Bristlebird (one year ago I imagined I would never see one – see why below). I know the Southern Emu-wrens were a highlight for many. White-cheeked Honeyeater was seen briefly by many participants, thanks to Tim Dolby picking it up fast, and another was seen right in Mallacoota. A Sooty Owl was heard by Tim Bawden & Rohan Clarke at Gipsy Point along with an Australian Owlet-Nightjar & a Southern Boobook, and a Lewin’s Rail was seen in Mallacoota by Martin Butterfield and friends. Nina & Giles added White-bellied Cuckooshrike race robusta, Square-tailed Kite and Painted Buttonquail to the list. White-throated Needletails were seen and recorded all over, from west of Cann River to Mallacoota, by most observers, and Kayleen Bilson also saw a Pacific Swift. 6 Great Knot were first seen by Tim Bawden & Rohan Clarke at Captain Stevenson’s Point, and Red Knot was found there by Rob Clay. 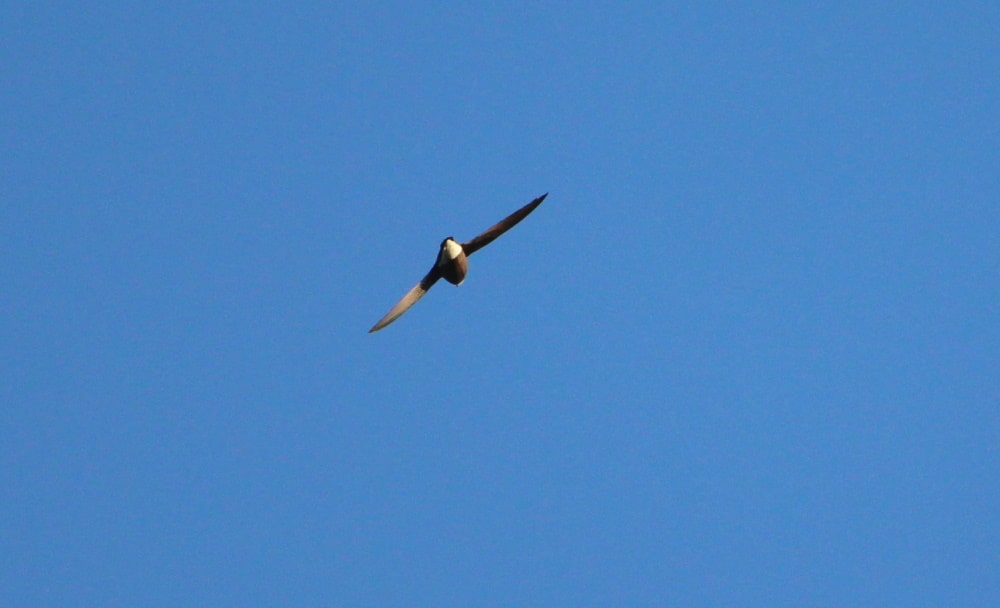 Here’s a bit more about some of the sought-after birds:

I think everyone who wanted to, saw this species. We can now safely say there are at least four Eastern Reef Egrets at Mallacoota at the moment. Rohan C & Tim B saw one at Bastion Point at 9.44am on 7 March, then at 9.52 saw one at Betka estuary. In addition, Angus H who was in the area recorded one at the tidal lagoon below Capt Stevenson’s Pt at 10.15 on 5 March, and at 10.11 & 11.09 on the same day Kayleen & Rob saw one at Betka causeway. Nina & Giles saw 2 at the Betka Causeway on 6 March at 5.50, and Karen W saw the same two at 6pm, then Nina & Giles saw 2 at Betka Beach at 6.20pm. Then, just after the weekend finished Deb & Guiseppe Oliver photographed 4 individuals at Betka Beach at the same time.

From the What’s App group: 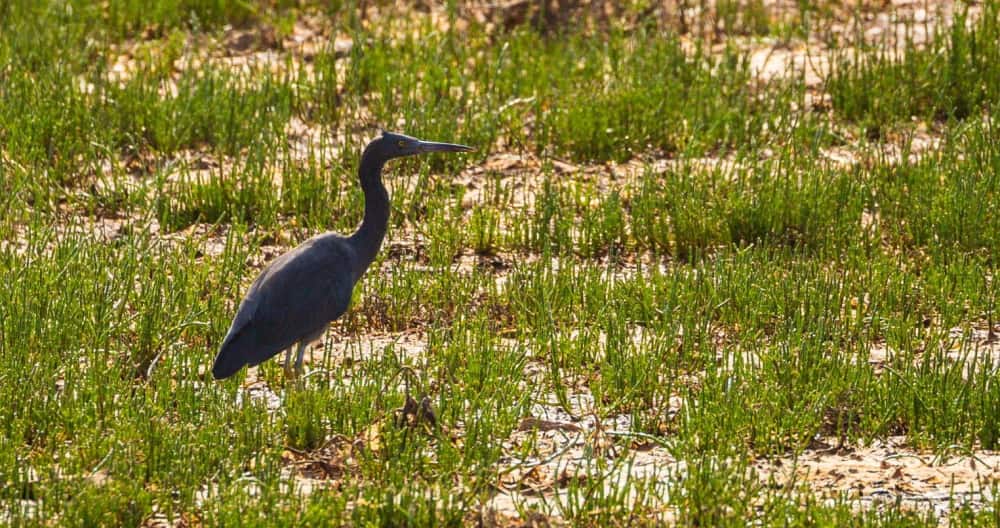 Most participants also saw Southern Emu-wrens over the weekend. A marshy site right in town was productive, but they were also seen at the airport, Shipwreck Creek, Betka Rd causeway and north of the Inlet.

This is really good news for this species. There were fears for them, as most of their habitat was burnt in the Black Summer megafires, and they are weak flyers. But it appears that a substantial number survived around Mallacoota.

“The Southern Emu-wren story is looking very positive after the birders weekend. Using the data on eBird the birders weekend produced the FIRST RECORDS POST FIRE for SEWs at Shipwreck Creek (Deb Oliver), the Mallacoota airfield (Tim Bawden and myself), Betka Road Causeway (at least 4 participants) and at three apparently different locations along Lakeside Drive. That all of these birds were recorded within a 3 to 4 day period indicates there is a minimum of 18 birds distributed over at least five sites and that all groups contain both adult males and females. Pretty remarkable given the intensity of the fire to the coast, especially ~west of the township along the coast. I wonder if it is because these birds are such poor fliers that they don’t fly out to sea (like it appears Ground Parrots and other species did) and rather those that find themselves v close to the coast in a firestorm end up on the beach during the fire and then eek out an existence in any unburnt shrub patch in the bend of a river, a tiny waterlogged sedge patch, a small dune swale or some other tiny refuge until the vegetation regenerates. The stuff at the back of the airstrip already looks perfect for Emu-wrens (knee to waist high with good floral diversity) so it now seems likely this species is going to bounce back much quicker than I would have predicted.” 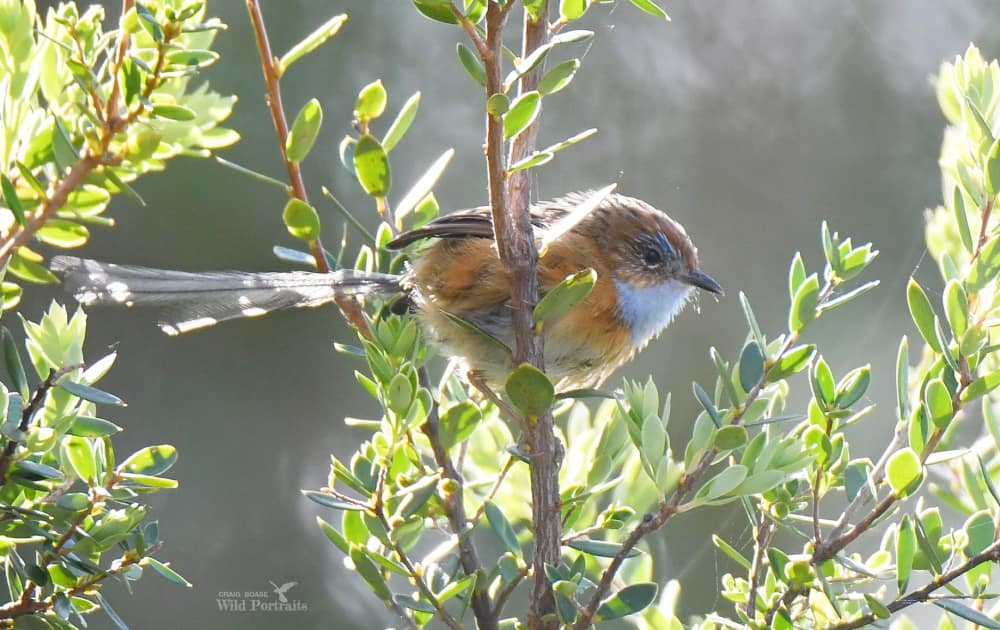 I can’t stress enough how lucky we are to still have Eastern Bristlebirds in Victoria. In February 2020, only one year ago, I was talking to Rohan Clarke about the fire approaching Howe Flat, and hearing of the plans for an emergency intervention to save the last remaining Victorian Eastern bristlebirds. Watch: https://youtu.be/CATTH7F-sd4 Fortunately, Howe Flat was saved and the insurance population birds were released back to their home after a short stint at Melbourne Zoo.

Before encouraging people to see this critically endangered species I checked with experts about the best protocol for observing the bristlebirds without harmful disturbance. Participants were informed, boots were cleaned, and ethical birdwatching promoted. Observations and photographs have subsequently been shared with the DELWP Eastern Bristlebird team, including an important breeding record.

The very young juvenile bristlebird seen by myself, Heather Alexander & Uta Meyer is possibly the latest* breeding ever recorded in the wild for this species, and helps experts estimate a timeline from nestling to independence. (ie latest in the year) 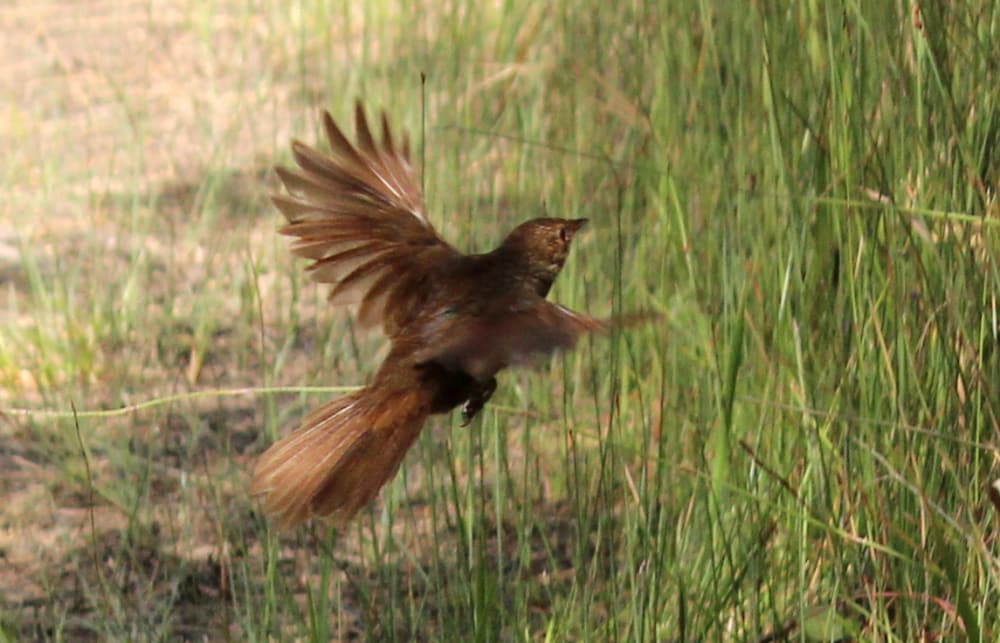 Often considered a drawcard bird to Mallacoota, sadly much of the preferred habitat of this bird was burnt in the fires. So it was great to have three separate observations of Glossy Black-cockatoos across the weekend.  Learn more about the situation for Glossy Black-cockatoos here: https://birdlife.org.au/projects/bushfire-recovery/south-eastern-glossy-black-cockatoo-bf 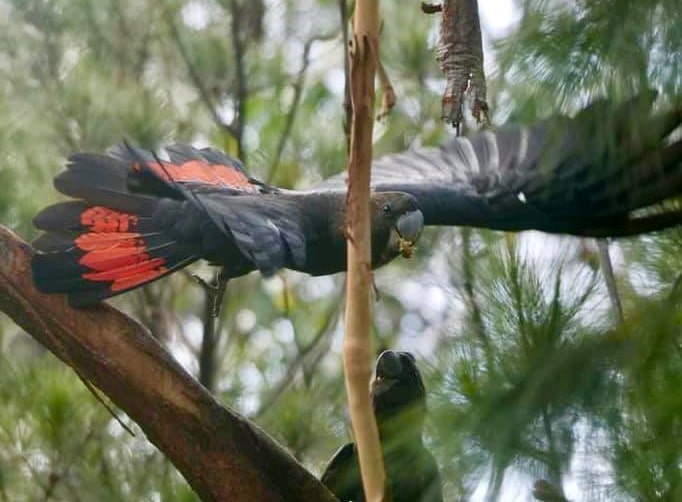 7/3/21, 1:20 pm – Nina Tsilikis: Not sure if of interest but we spotted white bellied cuckooshrike race robusta here.(They actually spotted 4 birds at this site, and saw more of this species further along Stony Peak Rd) 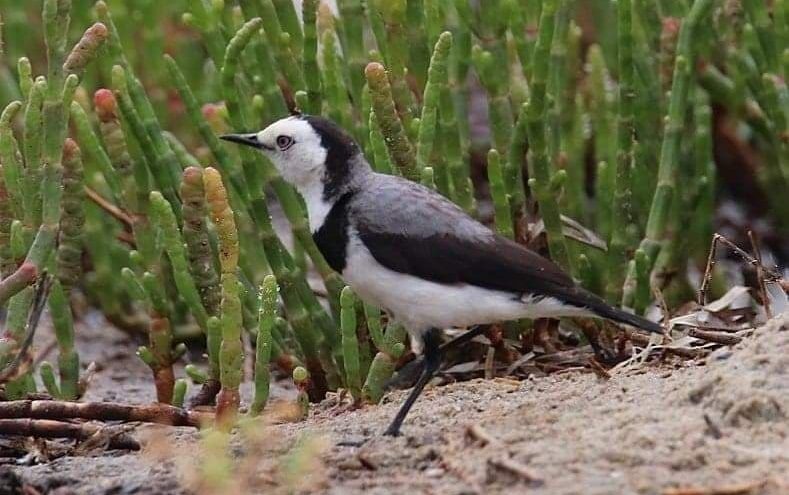 The registration fee of $20 per person has been donated in entirety to Birdlife Australia’s Bushfire Recovery campaign to support Glossy Black-cockatoos, Eastern Bristlebirds and Eastern Ground Parrots. https://birdlife.org.au/projects/bushfire-recovery

That totalled $800 for 40 participants. Extra donations added $175, bringing the total to $975. Another generous donation of $300 (thankyou J & D) was made directly to BirdLife Australia as part of this event, so in total the event generated at least $1275 for bushfire recovery. 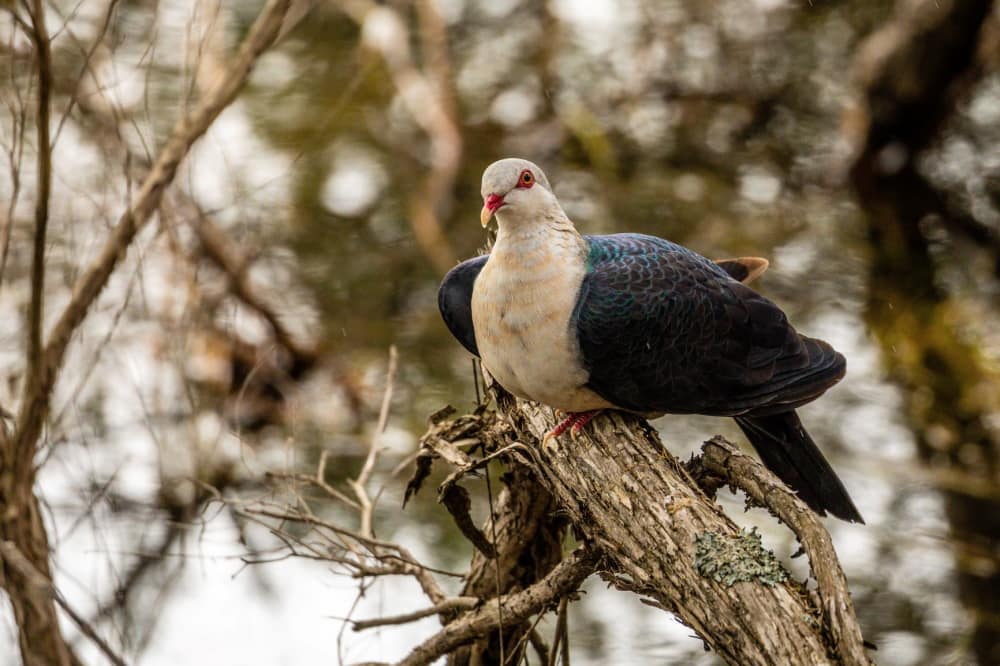 Who’s crazy idea was it to run a bird festival in March in southern Australia?

Autumn is quiet for birds, surely Spring would be better? Yes, it certainly would – but this birders weekend happened for other reasons.

After the terrible fires of 2019-2020, Karen Weil and I were trying to think of a way to help Mallacoota and deal with our grief over the lost habitats and wildlife. So we planned a weekend over Labour Day holiday 2020. Roger Smith suggested we invite a few others, and Martin Butterfield enthusiastically concurred. Before we knew it, 18 people were heading to Mallacoota for the first ever Mallacoota Birders Big Weekend.

We plan to continue to run this event over Labour Day holiday each year, and we might add a late November date as well. If you are interested in attending, please email janine@echidnawalkabout or click here to be added to the mailing list: https://mailchi.mp/8b1289ffef44/mallacoota-birds 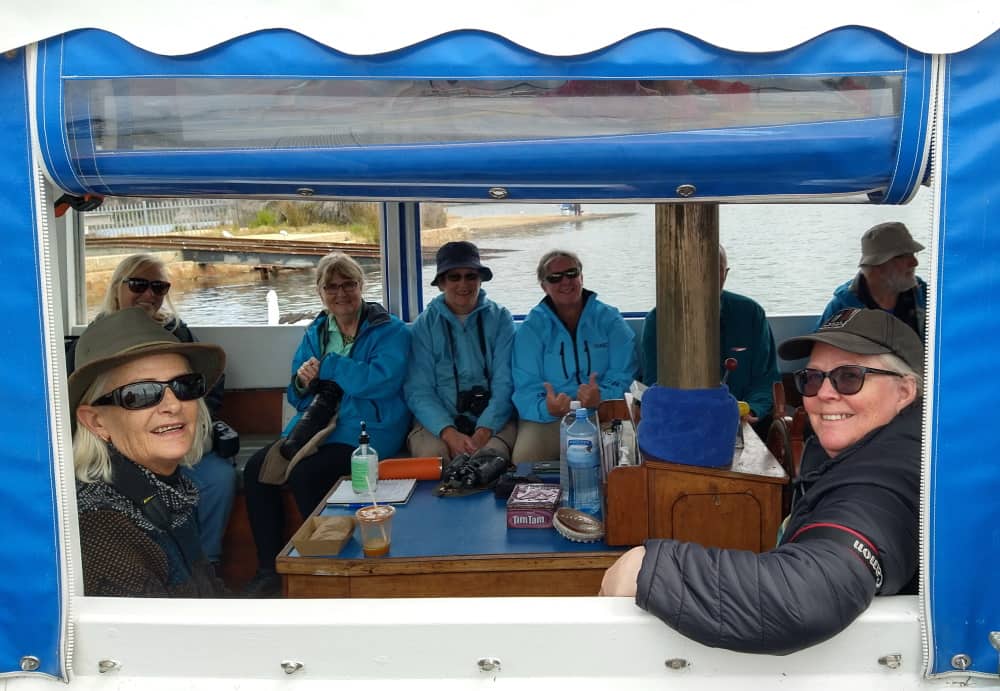 Thankyou to all Mallacoota Bird Weekend participants – the sharing and friendliness was felt by all. We are grateful to Echidna Walkabout Nature Tours who provided staff time, expertise, technology and sponsored the event for $350, Tim Dolby for guiding walks & expertise, Mallacoota Cruises – Dale Winward for the boat trips, BirdLife East Gippsland for enthusiastic support, Joe Stephens & Sally Cantrill for hosting in Cann River, Rohan Clarke & Tim Bawden for expertise and spotlighting, Hammond Properties – Amelia Hammond for hosting many of us so well, and the businesses of Mallacoota and Cann River for wonderful service.

A particular thankyou to Martin Butterfield, co-organiser of the 2021 Mallacoota Birders Event and local Mallacootian, for thoroughly researching all the walks and producing comprehensive maps for the event. Martin also compiles the analysis of the event statistics and ensures all the sightings make it onto eBird. He will be publishing a summary of the event on Mallacoota Birds facebook group. 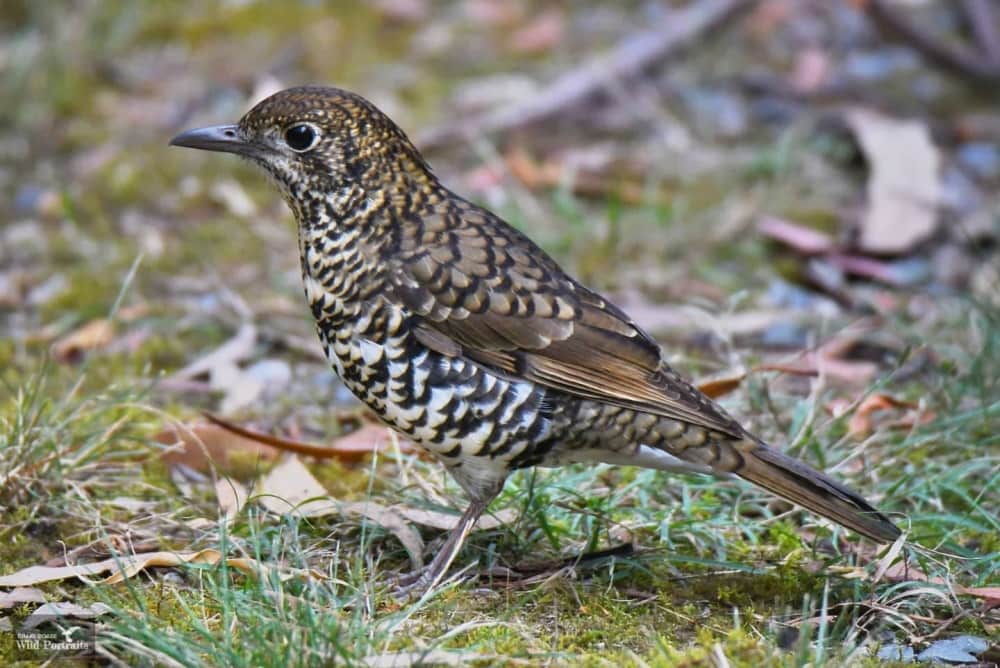