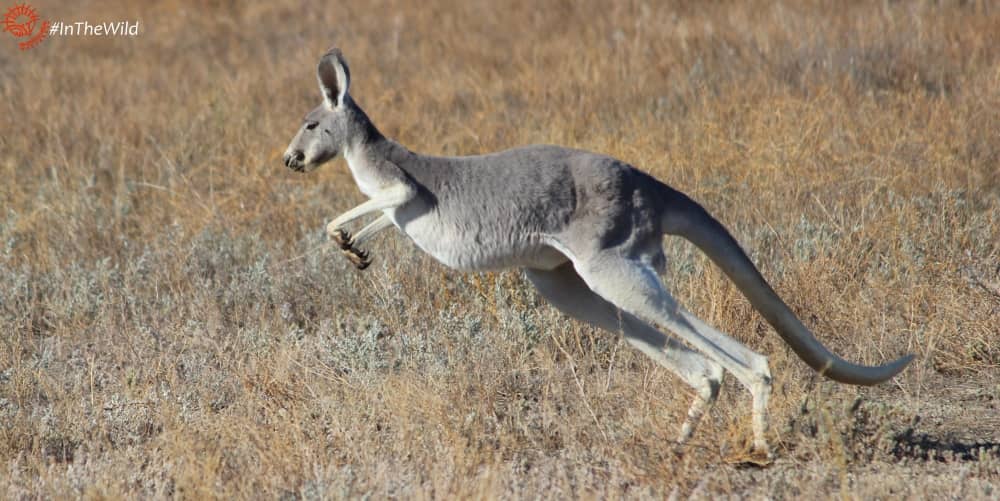 But what sort of kangaroo did you see?

It was just a kangaroo, aren’t they all the same?

No! There are 71 species of kangaroo/wallaby, all different and fascinating. 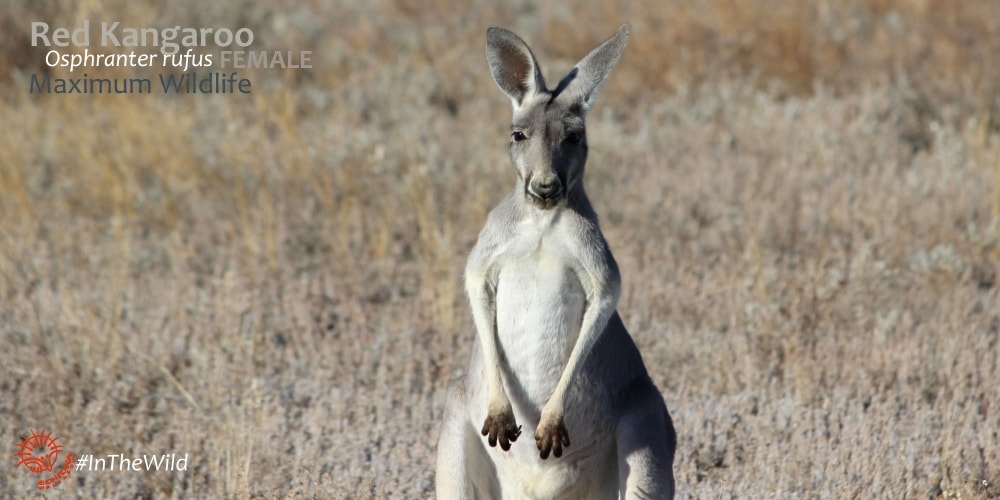 Imagine the same thing happening on safari in Africa:

You go to Africa and see a small, colourful, graceful antelope: a Springbok. Everyone gets excited.

So when you see an Eland, which is 22x times larger than a springbok, plain-coloured and ponderous, you say: no big deal, let’s move on.  You’ve already done antelope.

Hahahaha, that’s just crazy. No-one in Africa would do that. Eland and Springbok are both antelope, but they are not at all alike. Each species is incredibly exciting to see.

Red Kangaroos and Agile Wallabies are not at all alike either. So why would anyone dismiss a kangaroo with just one tick?

So next time you see a kangaroo or wallaby, ask – what species is it? 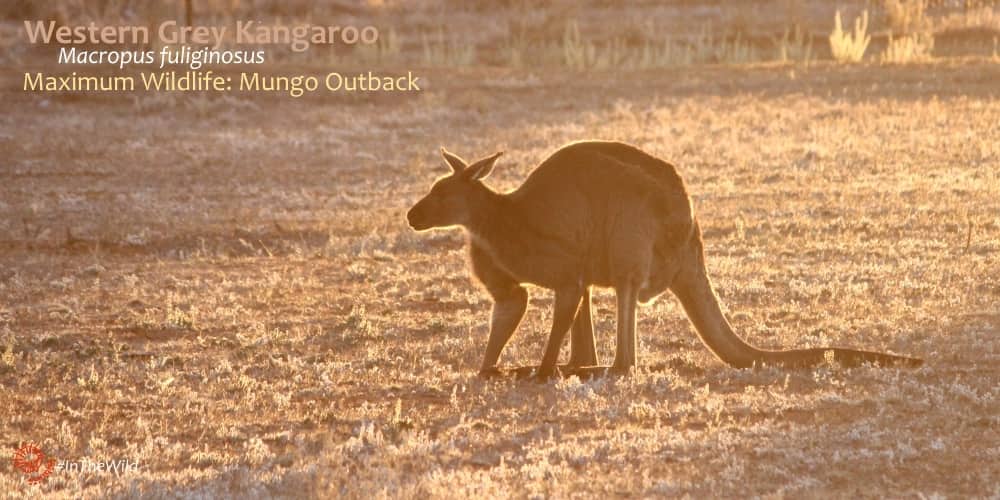 There are a huge number of kangaroos and wallabies in Australia. The macropods of Australia are just as diverse as the antelopes of Africa. Like antelopes, macropods come in a huge range of sizes, colours, habitats and behaviours. 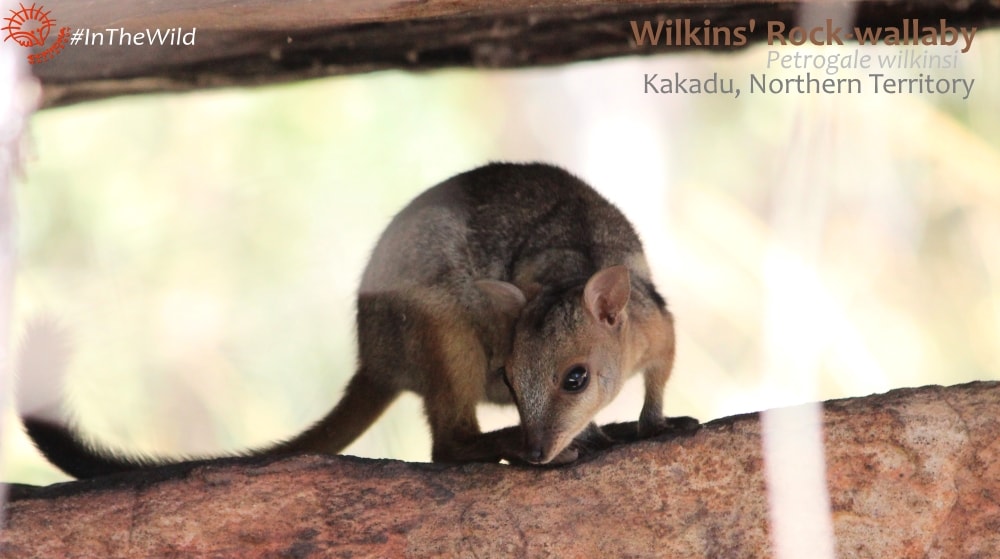 How many species of macropods are there?

72 – 86 number of species of antelope in Africa

Australian Macropods have similar diversity to African antelopes, especially considering that the Australian continent is only about one-quarter the size of Africa. 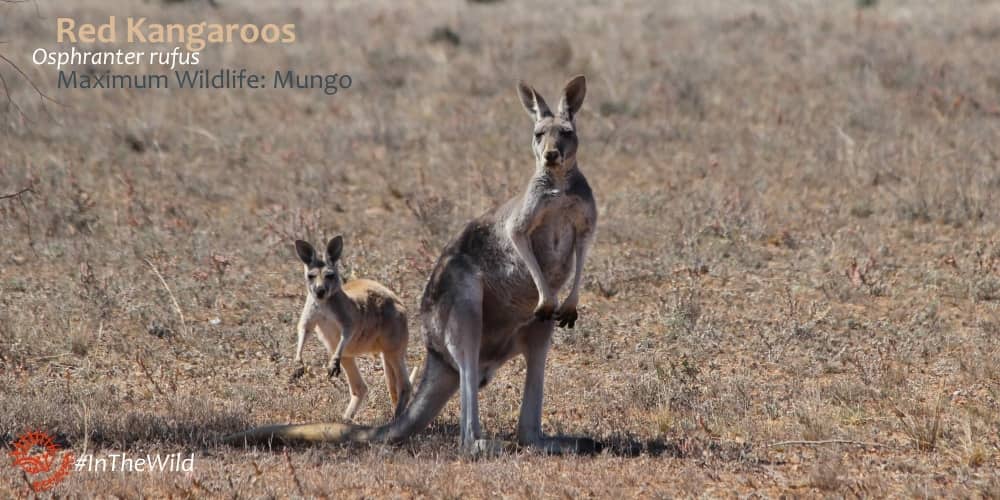 On our Maximum Wildlife 21 day wildlife tour of Australia we see up to nine species of macropod / kangaroo. We mostly see the big ones – four to five species of kangaroo, three wallabies and one rock-wallaby.

Read on for some interesting facts about Australian kangaroos and wallabies:

If you love to photograph kangaroos, you must come to the Australian Outback with us. Mungo National Park is situated right in the overlap zone where Red and Western Grey Kangaroos are most numerous.  The desert light of Mungo is crisp and brilliant, the red, yellow or white sand and soft blue vegetation provide a beautiful scene for two species of great kangaroos. 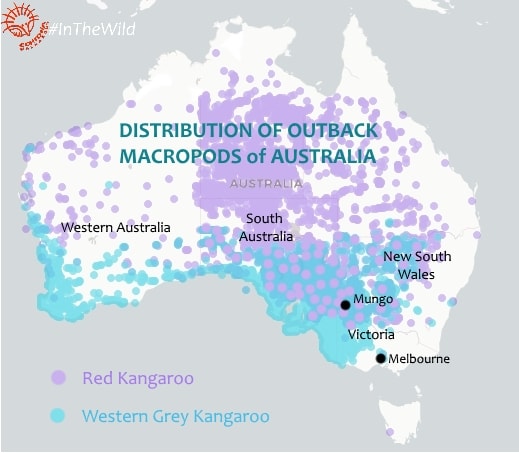 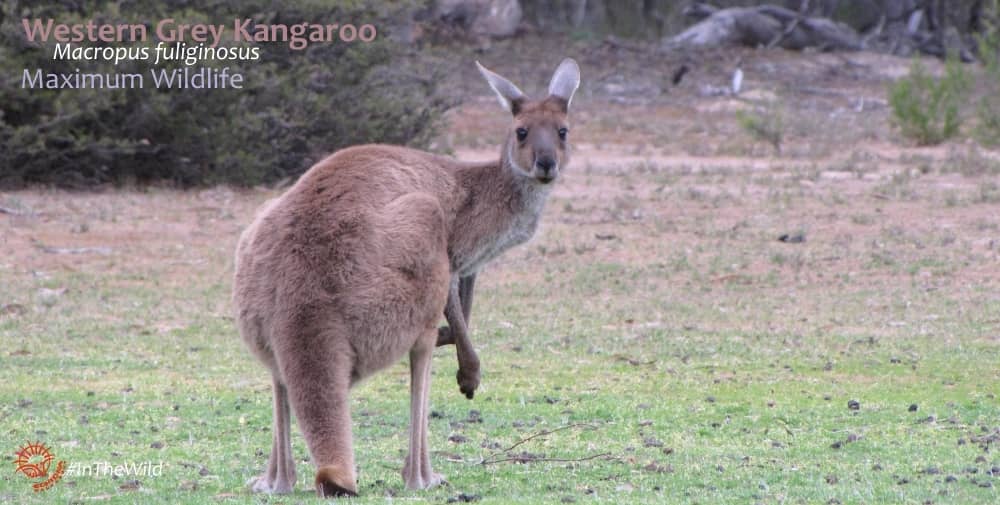 They really shouldn’t be called ‘grey’ as they are not grey in colour. They are brown, ranging from dark chocolate brown on the paws, tail and ears, milk chocolate on the body, and creamy white on the belly. They are called western grey because they are the western version of the closely-related eastern grey, which actually is grey in colour. 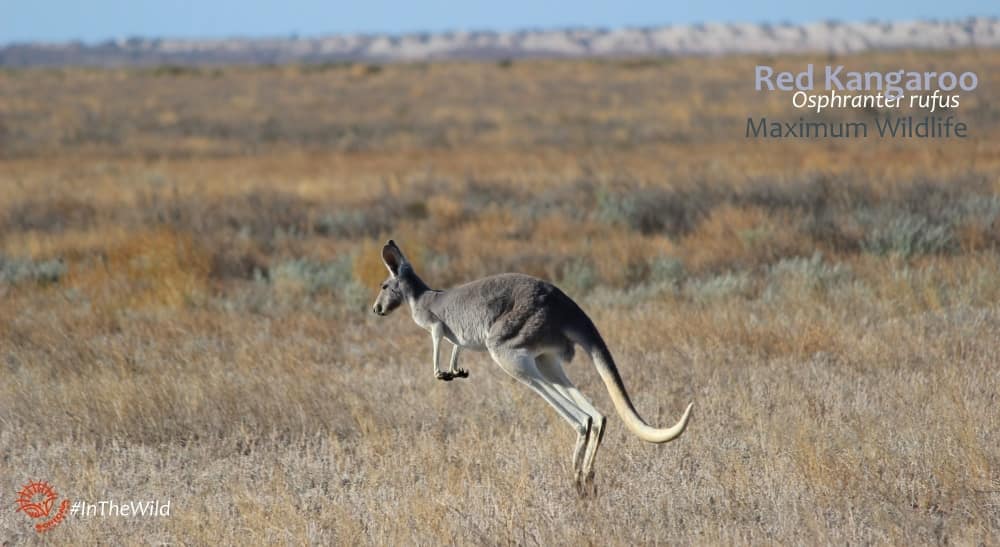 Our most famous species of kangaroo is sometimes the hardest to see – they live in the deserts of Australia, far from cities. But in the Mungo Outback, we usually see hundreds. 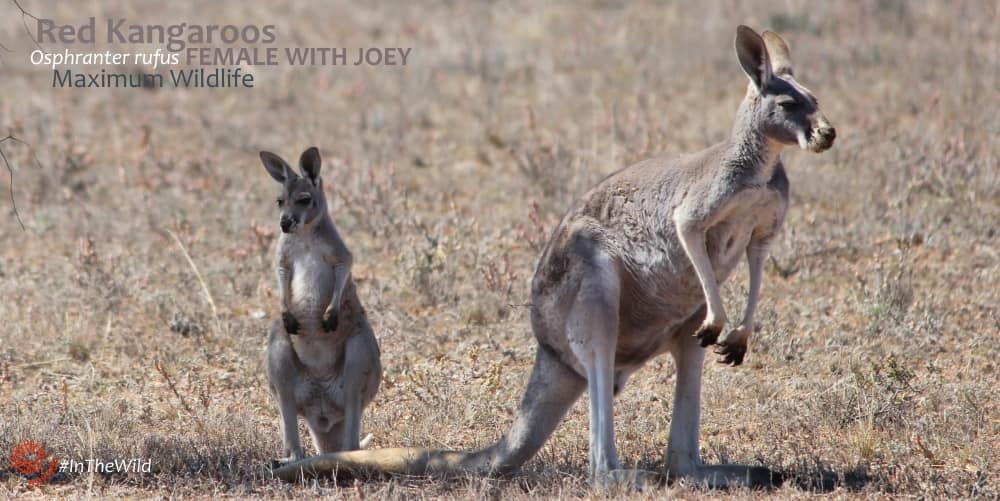 The temperate forests and grasslands of Victoria are home to some of our largest wallabies, and large populations of one of the biggest kangaroos. 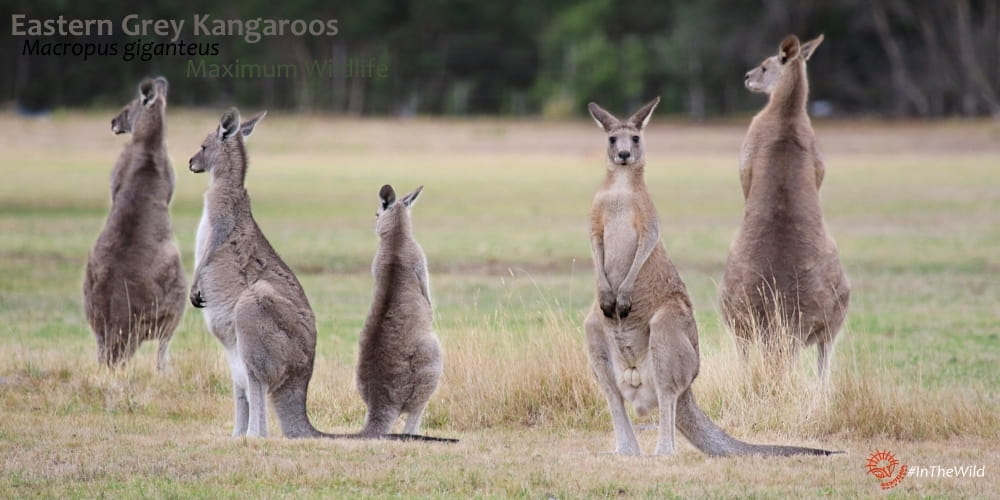 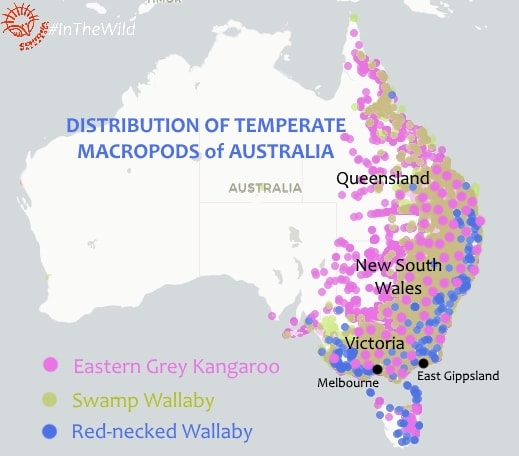 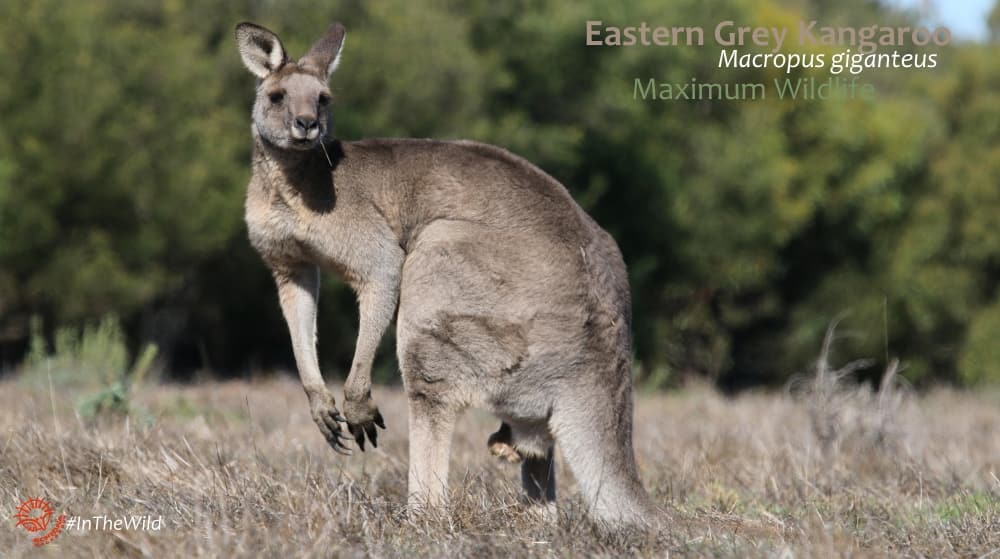 This is the kangaroo that most visitors see when they come to Australia. They live closest to the largest cities of Melbourne, Sydney & Brisbane, and are one of the largest and most gregarious kangaroos. Male Eastern Greys, like this big guy above, can reach 90kg and stand 2m high.  Females are very pretty, and most often seen with a joey at foot and in the pouch, like this one below. 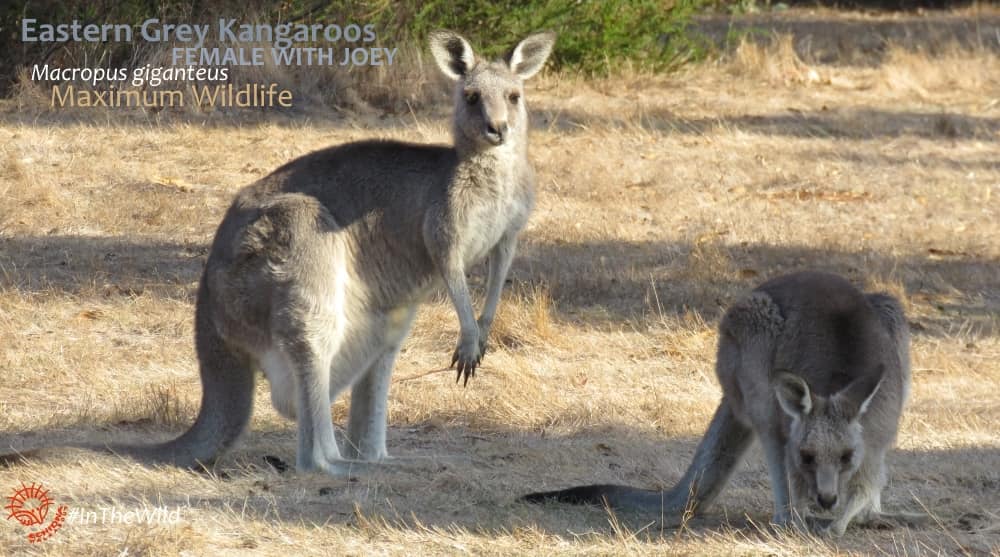 On our Maximum Wildlife tour we see Eastern Grey Kangaroos in the You Yangs and the Great Ocean Road and in East Gippsland. 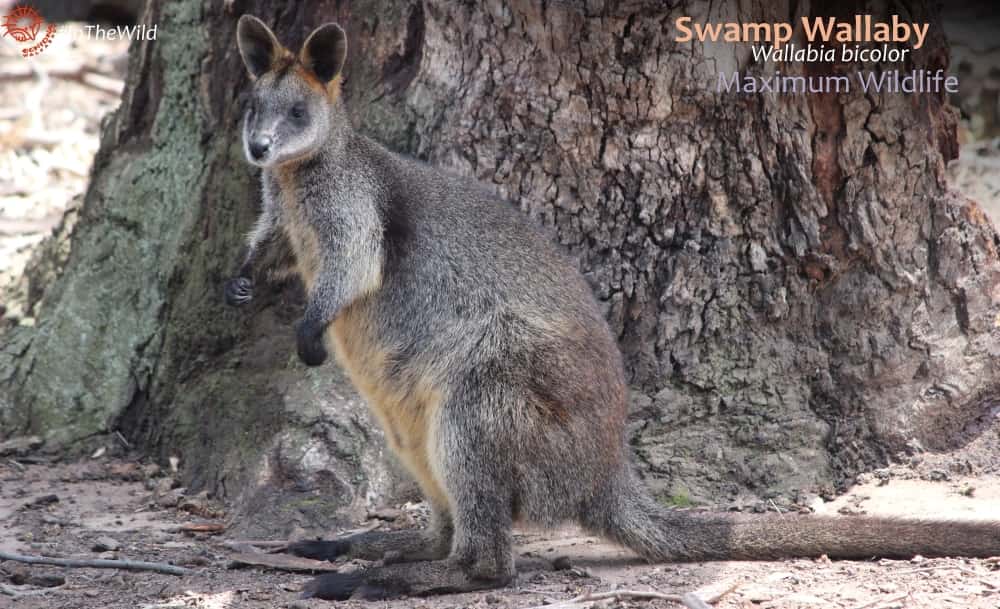 One of Australia’s largest wallabies, the Swamp (or Black) Wallaby is beautifully coloured in black, grey and rufous red.

This wallaby is a bit of a weird one – they are the sole member of the Wallabia genus. They are so different to other macropods in Australia, they even have a different number of chromosomes.

Wallaby Weird Fact: How many chromosomes do Swamp Wallabies have? 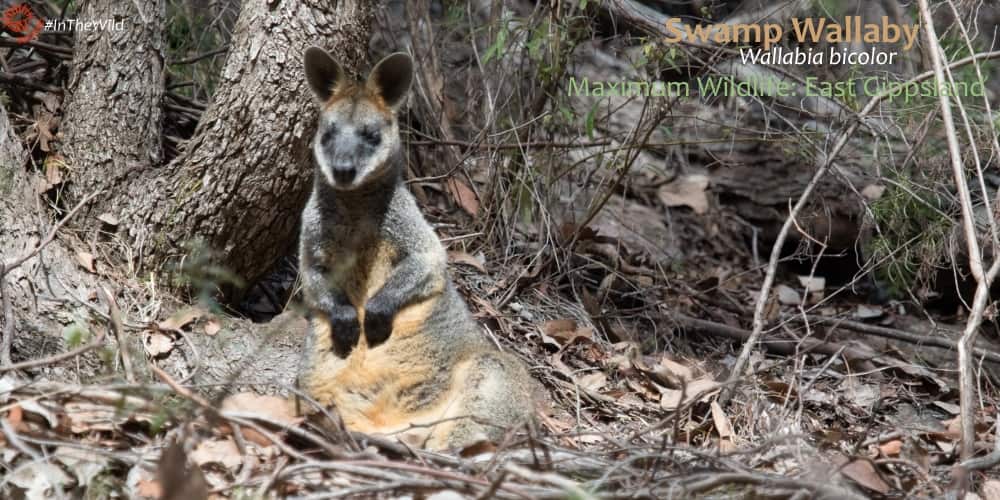 We see single Swamp Wallabies, or occasionally two or three together in forested areas of East Gippsland, the You Yangs and Great Ocean Road. 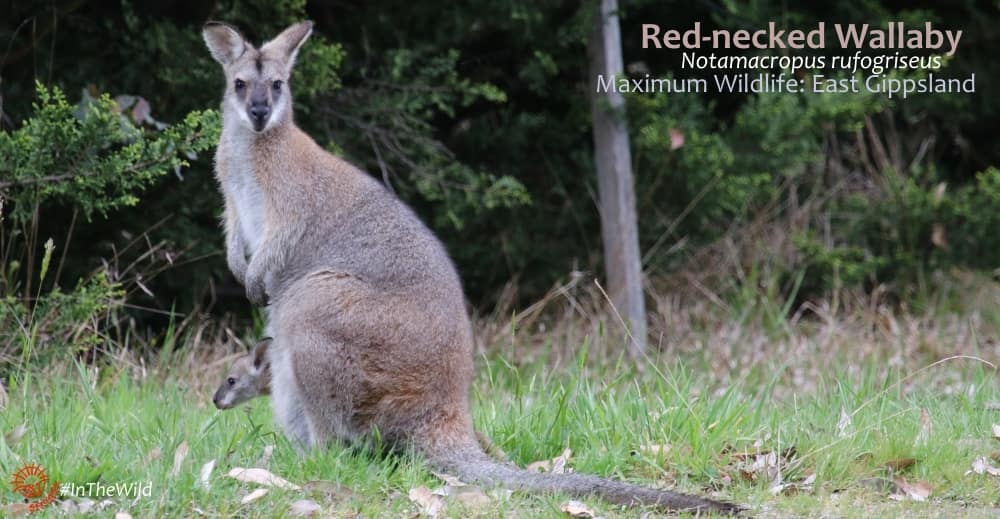 The Red-necked Wallaby is an elegant large wallaby with a rufous tinge to the neck and back. The rest of their body is warm grey, with a white line along their jaw and very black muzzle. Both females and males have this colouring, though males – like the one below – can be more reddish. 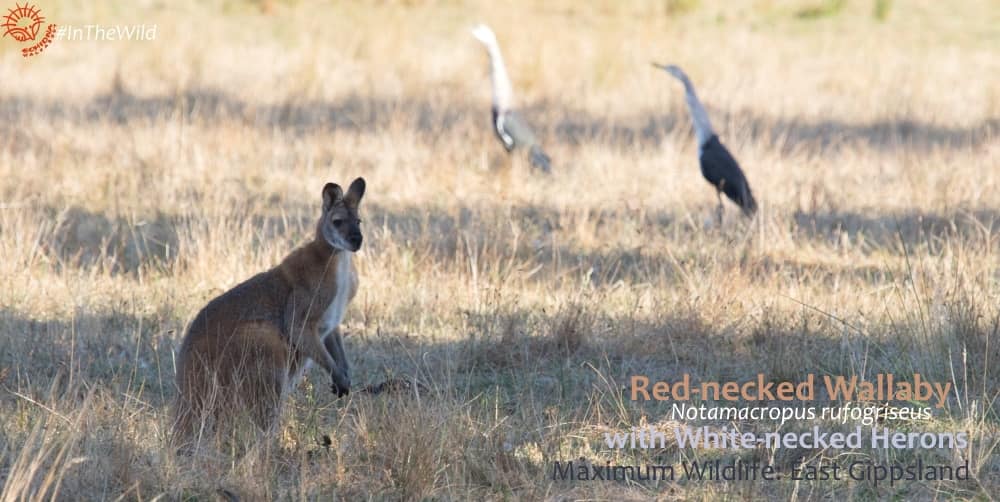 We see Red-necked Wallabies on grassy plains in East Gippsland.

Tropical Australia is mostly home to small wallabies and exciting rock-wallabies with very limited distribution, but two great kangaroos can be seen around Kakadu – including Australia’s rarest kangaroo. 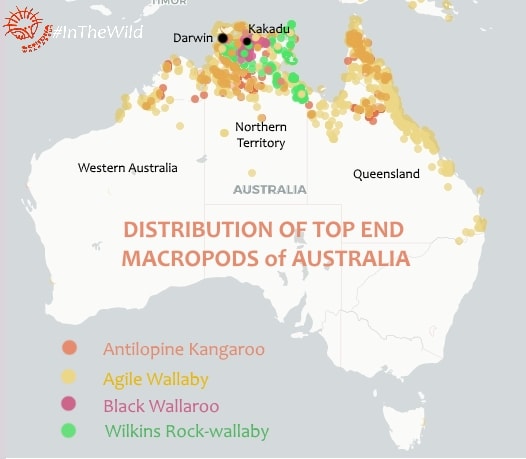 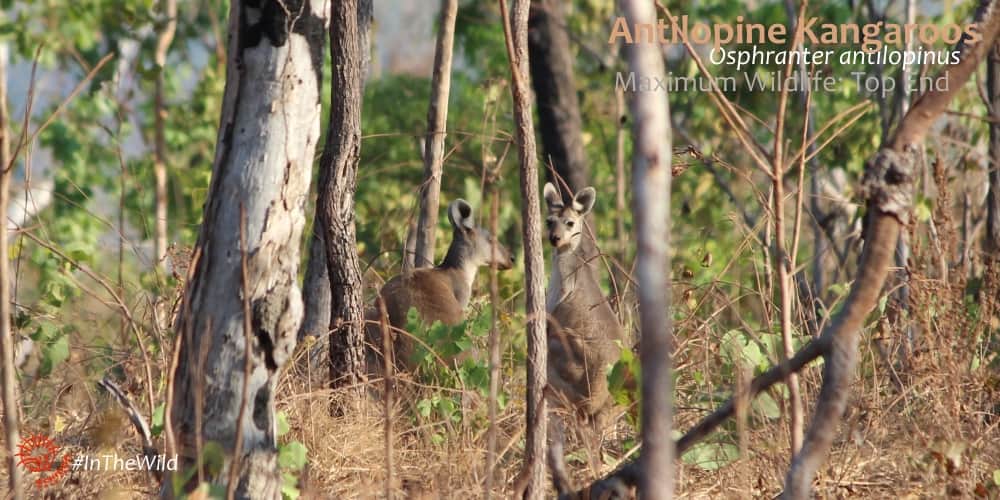 These beautiful animals have been dubbed “Graceful Kangaroos” by our guides – they are elegant and haughty, and pause only briefly before gliding off through the tropical savannah woodlands they live in. They are quite large – as big as Western Grey Kangaroos – but they are not common in their habitat, so can be a challenge to find. 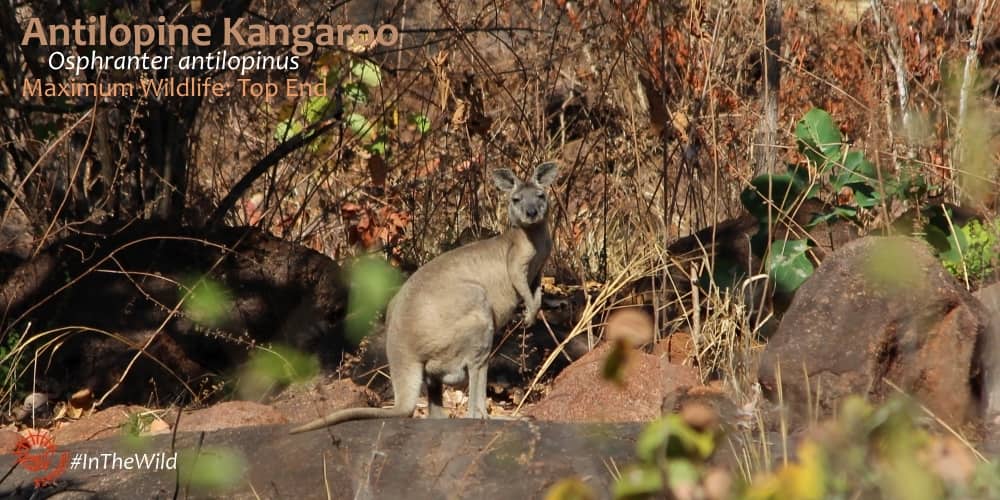 We usually see a couple of Antilopines around Mary River National Park in the Top End part of the Maximum Wildlife tour. 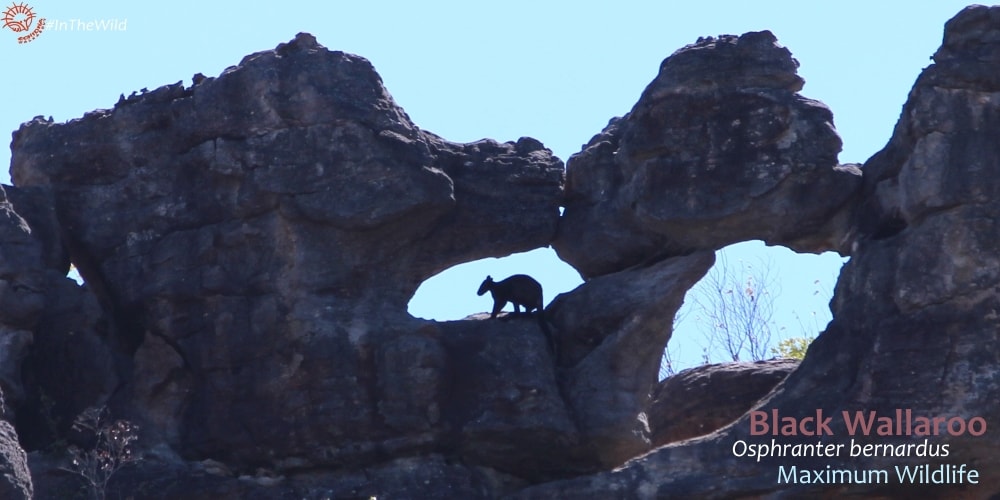 This is Australia’s rarest kangaroo. Black Wallaroos only live in the Arnhemland Escarpment, which includes Kakadu National Park.

They are the smallest of the six Great Kangaroos, and only the male is black in colour.

We have seen Black Wallaroo in Kakadu National Park in the Top End. Read about that amazing experience: 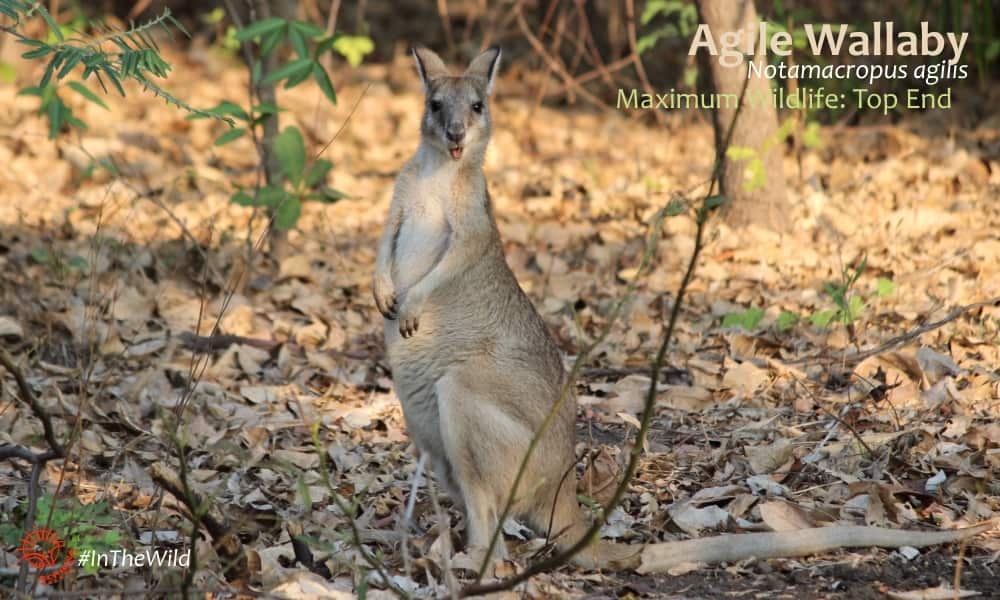 This beautiful little wallaby is the most common macropod in the Top End. They are very social, and can be seen in groups of 20 or more.

Like many wallabies, they have delicate and beautiful colouring that helps them blend in with their background. In the Top End, where the light is often tinged golden, their gold-tan coat matches the sunny patches. They have a white leg stripe, and a white jaw stripe, which breaks the outline. Their ears are tipped black and they have a dark dorsal stripe through the ears and onto the face. 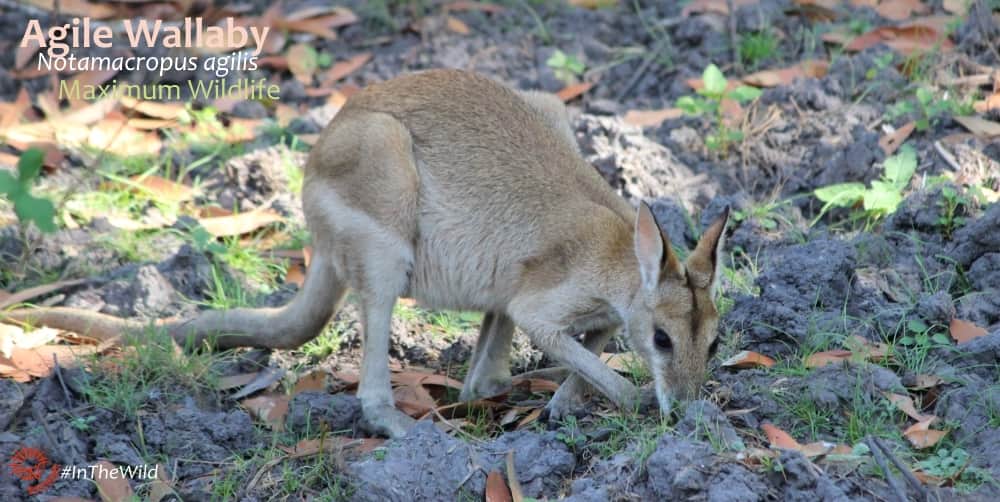 We see Agile Wallabies in most places in the Top End. 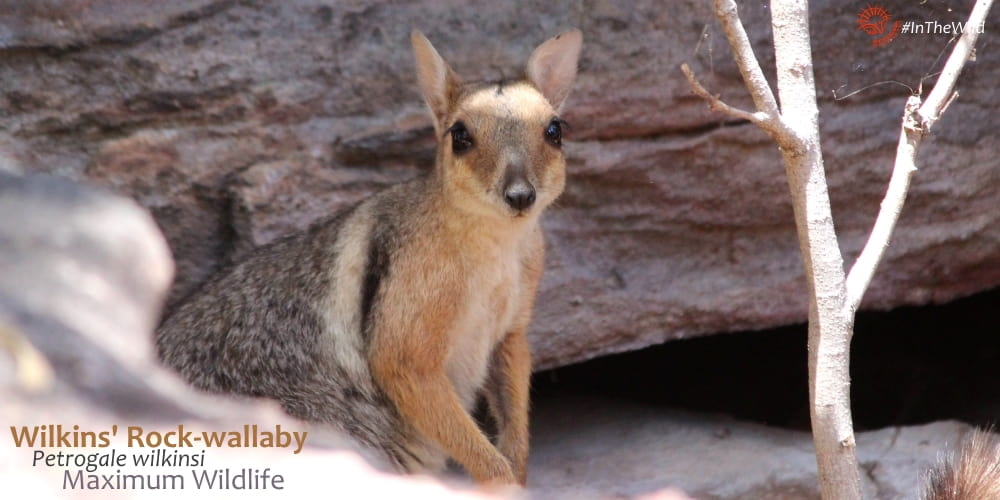 The smallest of the macropods we see, this tiny creature is the most colourful. Their arms and shoulders are rufous-orange which contrasts with their grizzled grey back. They have a black-edged white stripe from armpit to upper back. All together it makes them look like they are wearing a short bolero jacket.

Their long, slightly brush-tipped tail is rufous-orange. They have the most beautiful big dark eyes with long eyelashes. 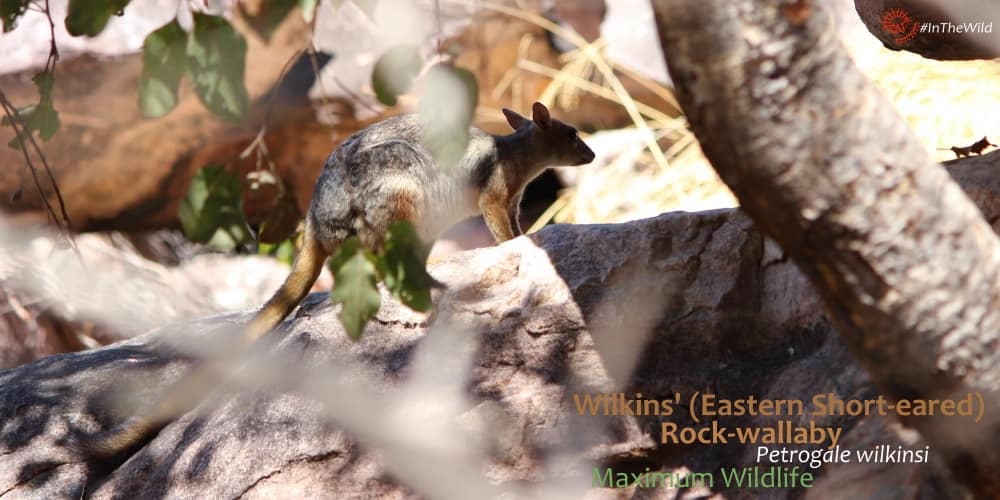 What is most amazing is the confident way they bounce around cliffs and boulders in their rocky outcrop habitat. Bounding straight up a near-vertical cliff face is no trouble at all. This article and video explains more about them.

We usually see Wilkins’ Rock-wallaby around the Arnhemland escarpment in Kakadu on the Maximum Wildlife tour. 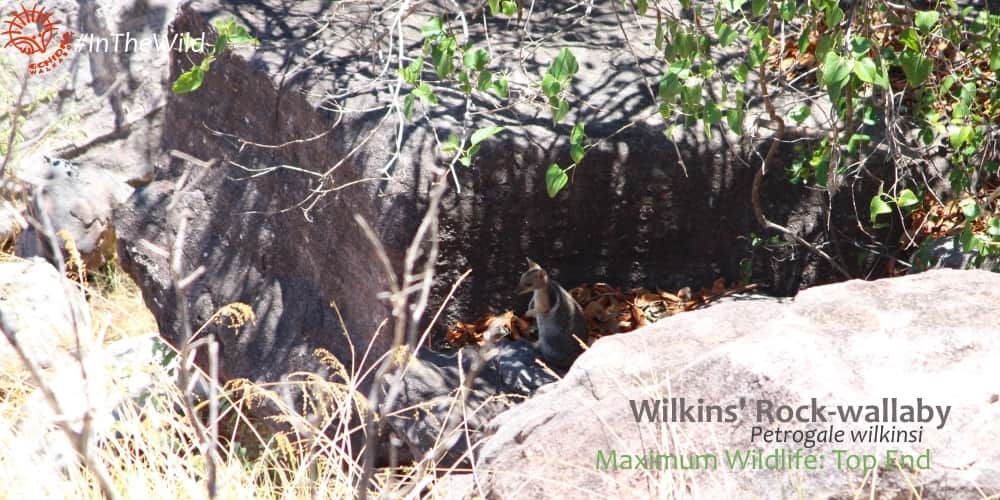 All of these macropods can be seen on one tour: the 21 day Maximum Wildlife tour from the Top End to the rainforests of East Gippsland. Or you can take components of the Maximum Wildlife over several trips, and see them all, in time.

Interested in other animals too?  Here’s a summary of which mammals, birds and reptiles we see and where.