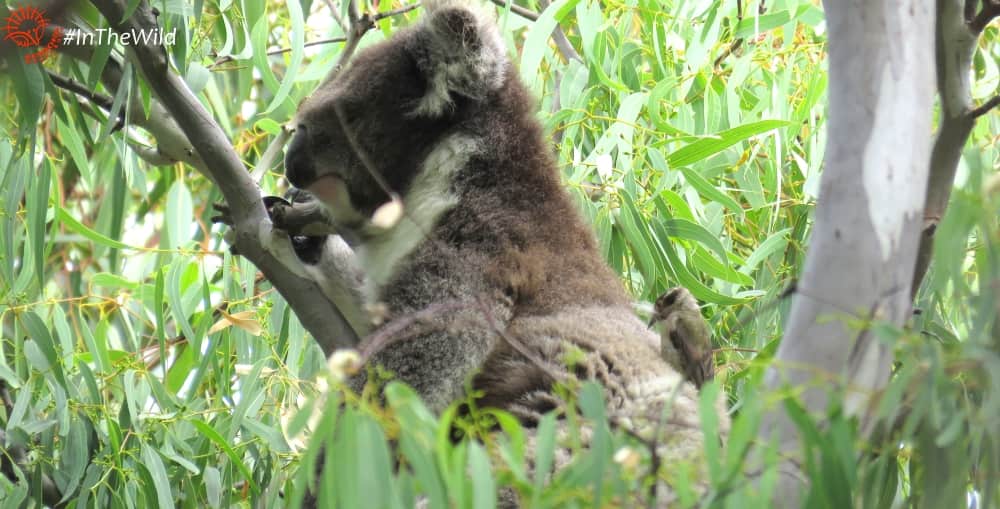 Over 26 years guiding tours for people from all walks of life we have sometimes been asked:

“What purpose do koalas serve in nature?”

It’s a question that shocks me, as I think it obvious that every creature has a purpose on this earth. But I have the great good fortune to work with nature, and to see the complexity of ecosystems. Not everyone has that luck.

It’s a hard question to answer, and made me think.

But what essential ecosystem service do koalas provide?

For many animals, the service they provide is not obvious. That doesn’t mean they are not important in the ecosystem, it just means that ecosystems are complex. It might also mean we haven’t worked out their purpose yet.

Did you know that flying-foxes are major pollinators of our eucalyptus forests, and without them we might not have timber, or paper, or honey? (6) Read more here.

Or that seagrass – that limp slimy plant that squishes between your toes when you walk in shallow estuaries – is as valuable as rainforest as carbon storage?  Learn more here.

Koalas are certainly useful to humans – they are responsible for an estimated $3.2 billion AUD in revenue every year. (1)

Are koalas useful to other animals?

I have found one other animal that koalas serve a purpose for.

In the You Yangs, west of Melbourne, a little bird lives in substantial numbers. They pollinate many eucalypt flowers, and eat lots of insects. They have a green back, a brownish head with a white stripe behind their dark eye, and a creamy-white belly. Around their eye they are pinkish-cream. They have a distinctive, friendly rattling call.

They are called Brown-headed Honeyeaters. 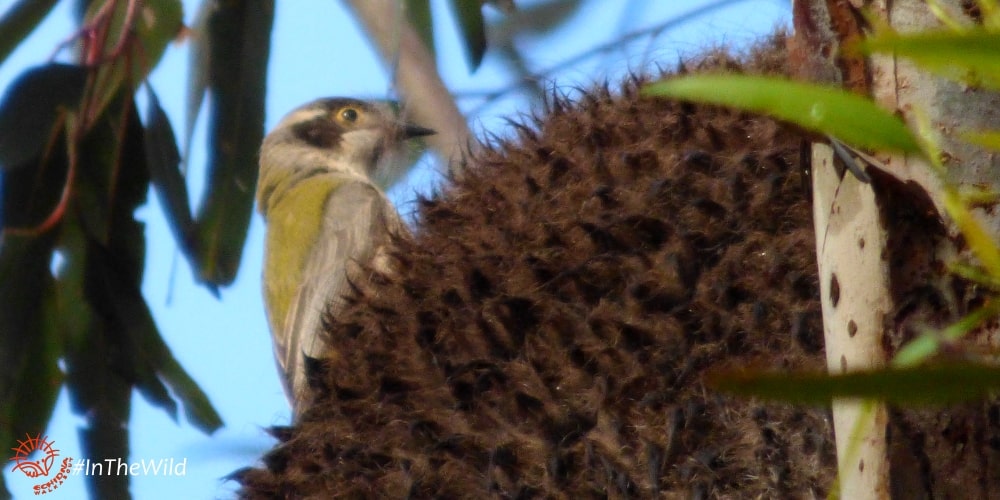 They are very successful, and considered common in their range. But like many ‘common’ species, their population seems to be declining (2. EOL) and the detail of their population size is not well known (3. IUCN).

They live as a family group, helping each other raise the chicks.

Their nest, like many honeyeaters in the Melithreptus group, is a small deep cup that hangs by its rim in the foliage of the lower branches of trees. The nest is made of bark strips, grass, cobwebs and hair (5).

Why koala fur is perfect for lining bird nests:

The insulation qualities of koala fur are on a par with Polar Bear fur. Read more about that here. A well-insulated nest means warm babies in winter and cool babies in summer.

Koala fur is available in the daytime

Unlike many Australian mammals, koalas don’t use a hollow to hide in during the day. They sit out, exposed, in a gum-tree all day long – the time when honeyeaters are active. Irresistible. 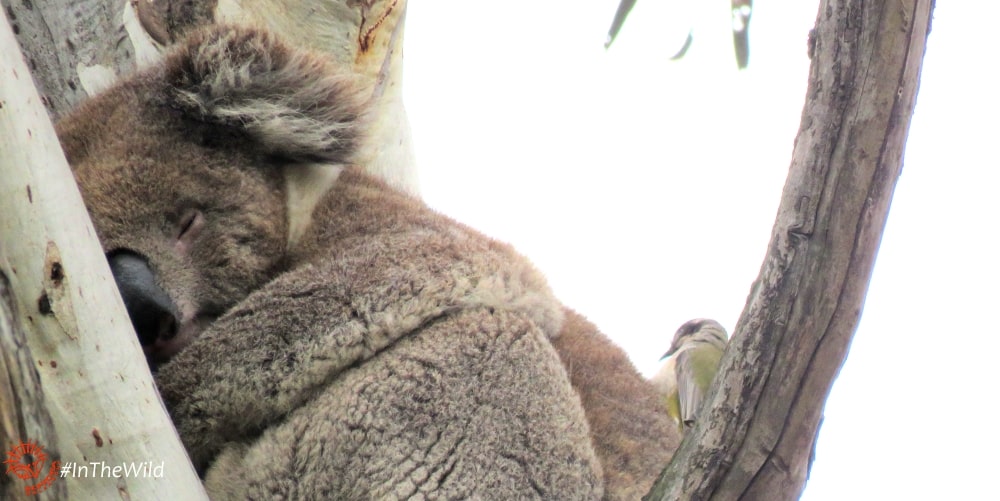 Koala fur is located in trees.

A high canopy-foraging bird (6), like the Brown-headed Honeyeater, can safely pluck koala fur without coming anywhere near the ground.

And pluck they do! Brown-headed Honeyeaters will converge on a koala in mobs. It’s not unusual to watch two to five Brown-headeds fluttering around a tolerant koala, cramming their tiny beaks with so much fur that they look like a new species: the Bearded Honeyeater. 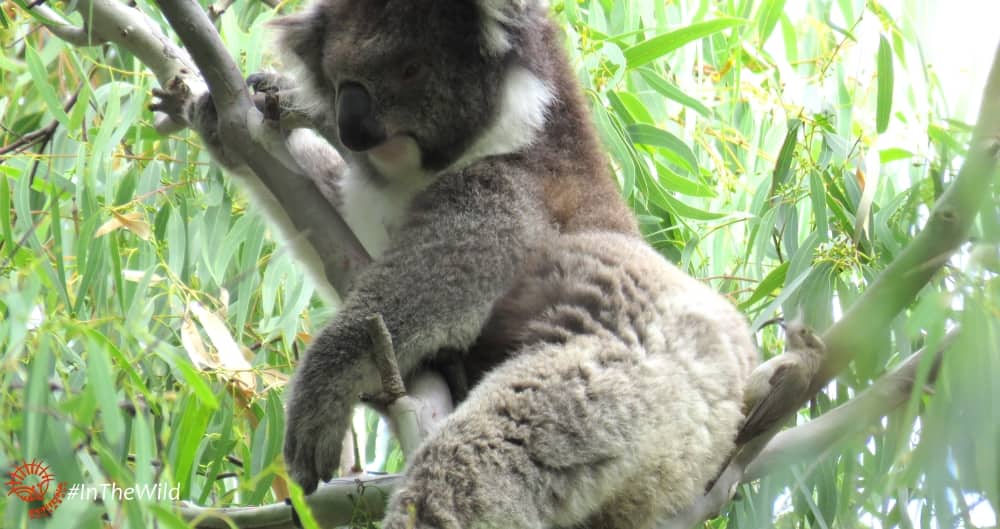 Sometimes a koala will get grumpy with the fur-pluckers, waking up and smacking at them with sharp, strong claws. Some will change position in the tree to make themselves less accessible.  But the Brown-headeds are unstoppable, and will persist. They will perch on a koala’s lower back – a relatively safe spot, almost out of reach of claws.

Some koalas don’t seem to mind the free grooming session, and will sit quietly as the honeyeaters purposefully take their fill. Sometimes a koala will wake up, surprised at the sudden pain, and start grooming vigorously.

Our observations have found that most adult koalas will tolerate the honeyeaters.  They stay awake throughout the fur-plucking session (which in itself is a response, as koalas are usually resting more often than they are awake), and if they are prompted to groom, they do so with no real attempt to hurt or dissuade the birds. This makes me wonder whether the birds are providing a service to the koala – removing old fur? 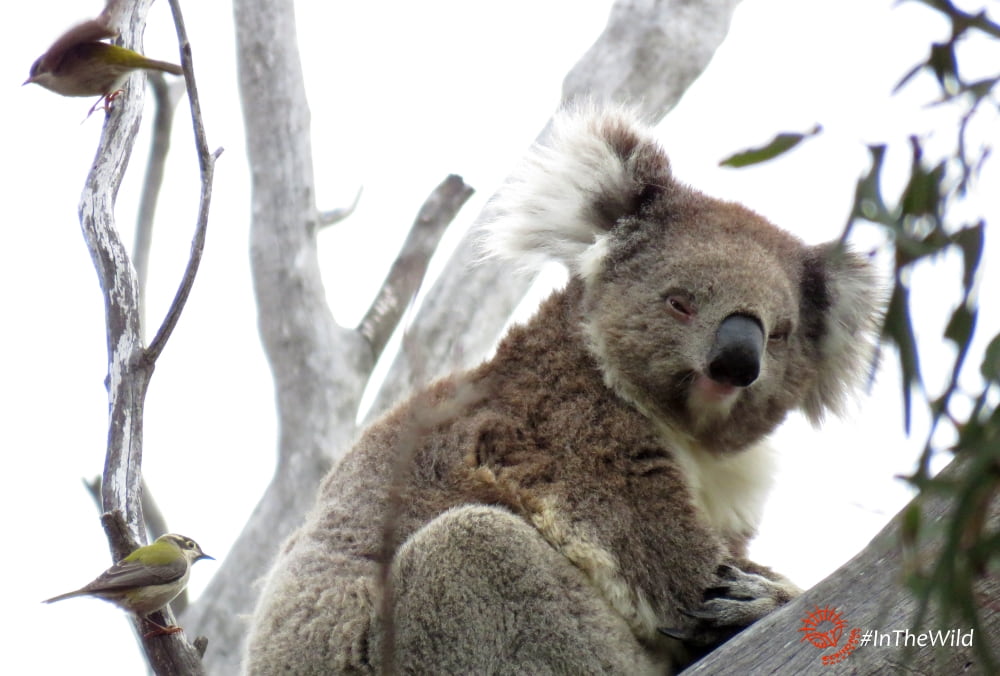 It seems that this species of bird prefers light-coloured hair to line its nest (HANZAB Vol 4 p 921) (4). The reasons are unknown. Koalas in the You Yangs usually have a grey-white rump and lower back – and we see most honeyeaters perching on a koala’s lower back. The other parts of a koala with white fur are the ears and the chest, but those locations may be dangerous for the bird. 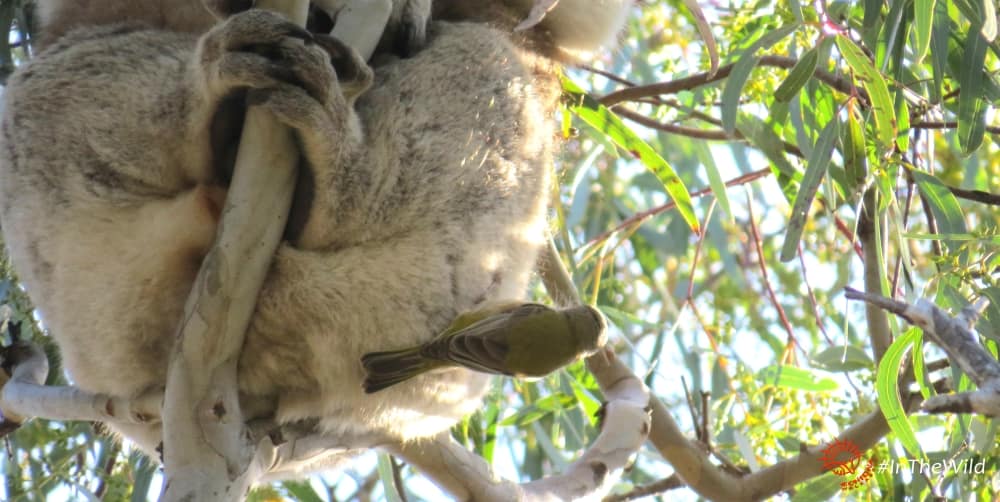 Breeding records of honeyeaters based on koala fur-plucking

Records of honeyeaters collecting fur from koalas could also be used as implied breeding records for the honeyeaters involved. The breeding season for Brown-headed Honeyeaters is shown as: Jul to Jan (Morcombe) Jun to Apr (BirdLife Australia), which is almost all year.

Our records support this, with the majority of fur-plucking occurring from September to February, but records in all months except March. 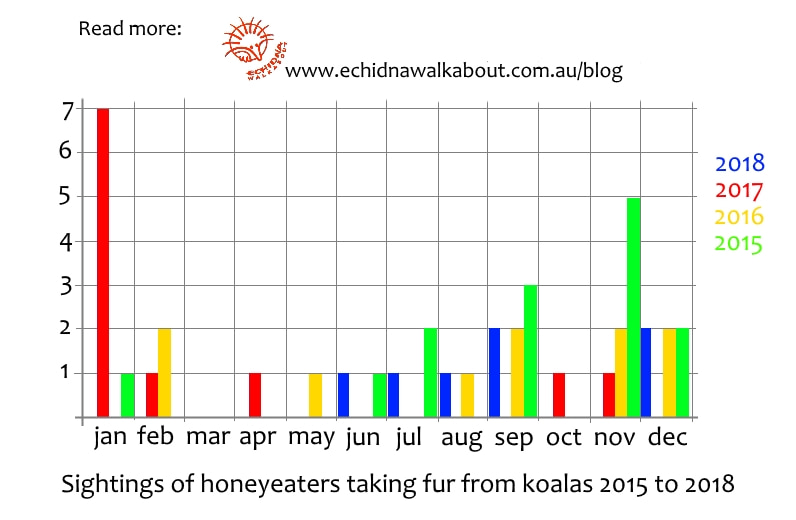 Visit http://www.bom.gov.au/ for more, or see specific links at note 7 below

Do honeyeaters prefer koalas with a particular quality of fur?

Do we see female koalas three times more often than males? No.  In 2017 we had sightings of 569 females and 533 males, which is a ratio of 1.07. So even though there are more females, we are just as likely to see males.

Why would the honeyeaters prefer female koalas for the purpose of collecting fur? Female koalas – especially older females – appear to have longer fur than males. It may even be softer. 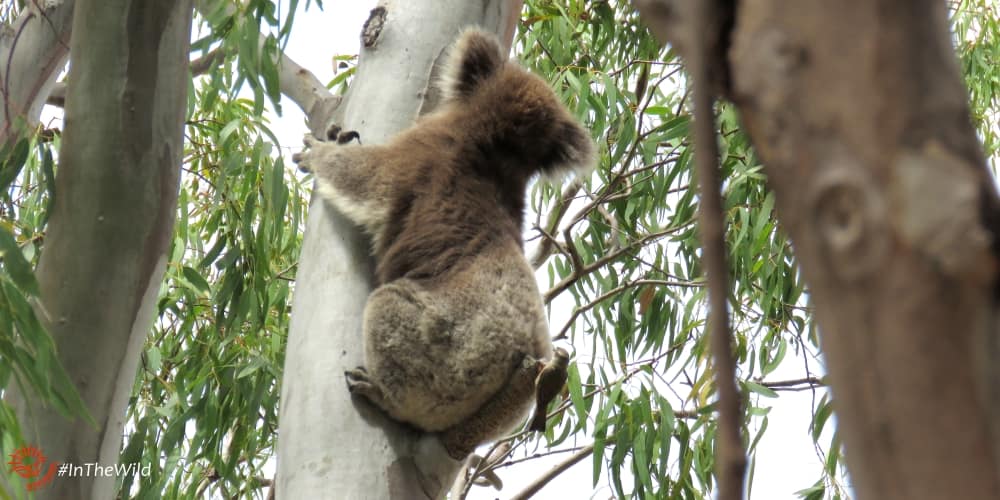 Fur-plucking has been recorded in koalas of all age classes, from dependent joeys to elderly animals.

On two occasions dependent joeys have been seen to swat the honeyeaters with great vigour, as the mother koala calmly allows the fur-pluckers. Possibly it is a learned behaviour that develops over time. Or maybe, as koala joeys are more active and playful than adult koalas, they don’t mind spending energy on swatting honeyeaters. 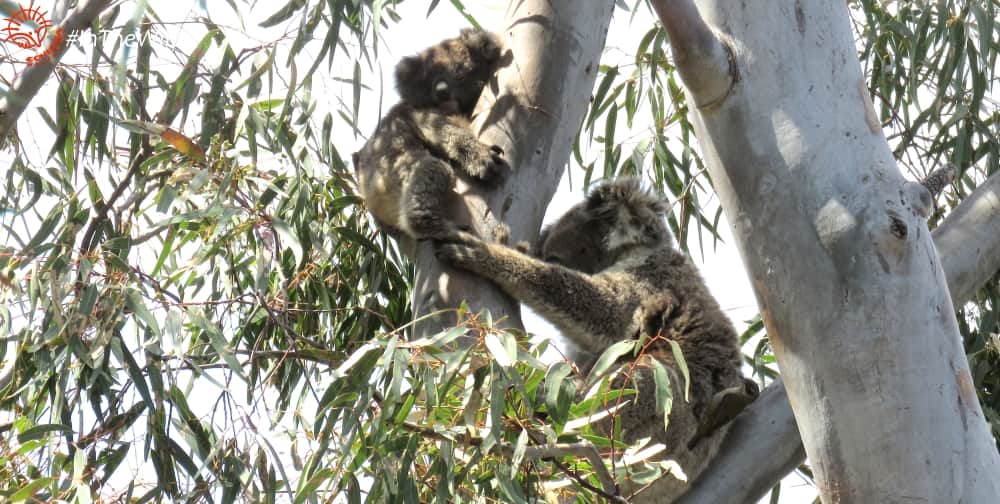 mother koala Ngardang tolerating a Brown-headed Honeyeater. Joey Lakorra was agitated by it (not shown in this pic).

Note: our observations of honeyeater fur collection are not exhaustive – they arise ad hoc in the course of our koala research, and are not our main focus.

It is interesting that the distribution of the eastern subspecies of Brown-headed Honeyeaters is quite similar to the distribution of koalas.  Take into account that Koalas once occurred in the Wimmera (VIC), upper Murray/Mildura (VIC, NSW), through East Gippsland (VIC) and the ACT, and along the inland rivers of NSW – areas that Brown-headed Honeyeaters still occur.

Note: the ALA map (koala) shows a point for each sighting, while the eBird map is a density grid dark purple: high density, light purple: low density.

Most of the Melithreptus genus of honeyeaters (Black-chinned, Golden-backed, White-naped, Black-headed and Strong-billed Honeyeaters) and White-eared Honeyeaters (Nesoptilotis) and Noisy Miners (Manorina) have also been recorded taking hair, as below:

White-naped Honeyeater (Melithreptus lunatus): sheep wool (CC)  Distribution: VIC, NSW, QLD (Note: even with the large population of WNH in the You Yangs we have never recorded this species taking koala fur)

Note: koalas only naturally occur in VIC, SA, NSW, QLD.  The initials beside each observation represent the person who provided the information – see below for their full names.

Do Brown-headed Honeyeaters have greater breeding success where there are koalas? Is koala fur preferred, but substituted with domestic animals and terrestrial animals when koalas are absent?

Could a decline in koalas negatively effect BHH breeding? Areas in BHH range where koalas have become extinct recently include Eden, NSW, Mildura & Swan Hill north-west VIC, the Wimmera, VIC. It would be interesting to check BHH population status in those areas.

Could a decline in koalas help explain the decline in Black-chinned Honeyeaters in the You Yangs? This seems unlikely, as koalas do still exist, but a reduction in numbers of koalas plus increased competition from communal-breeding (8) Brown-headed Honeyeater could have an affect.

Are there other species of birds that have been negatively affected by a reduction or local extinction of a nest-lining provider mammal?

I don’t know if this has answered the question of what purpose koalas serve in nature – but it has shown in some small way the magnificent complexity of our natural world. We don’t know the answers to all questions we might hear about koalas, or brown-headed honeyeaters yet. Wouldn’t it be a tragedy if we lost one or both of them – never knowing what else we lost with them?

As custodians of this planet we have a responsibility to preserve all the creatures that live on it. To preserve them, even if we don’t know their purpose. Yet.

Thankyou to the wonderful people in the Australian birding community who provided personal experiences of honeyeaters taking hair or fur, as below:

Check out the posts in the Victorian Birders Facebook group – a great source for information and assistance:

We enjoyed this Flickr photostream of older female koala Emma with a Brown-headed Honeyeater from one of our tour guests in 2015: https://www.flickr.com/photos/piedmont_fossil/24178950105/in/photostream/ 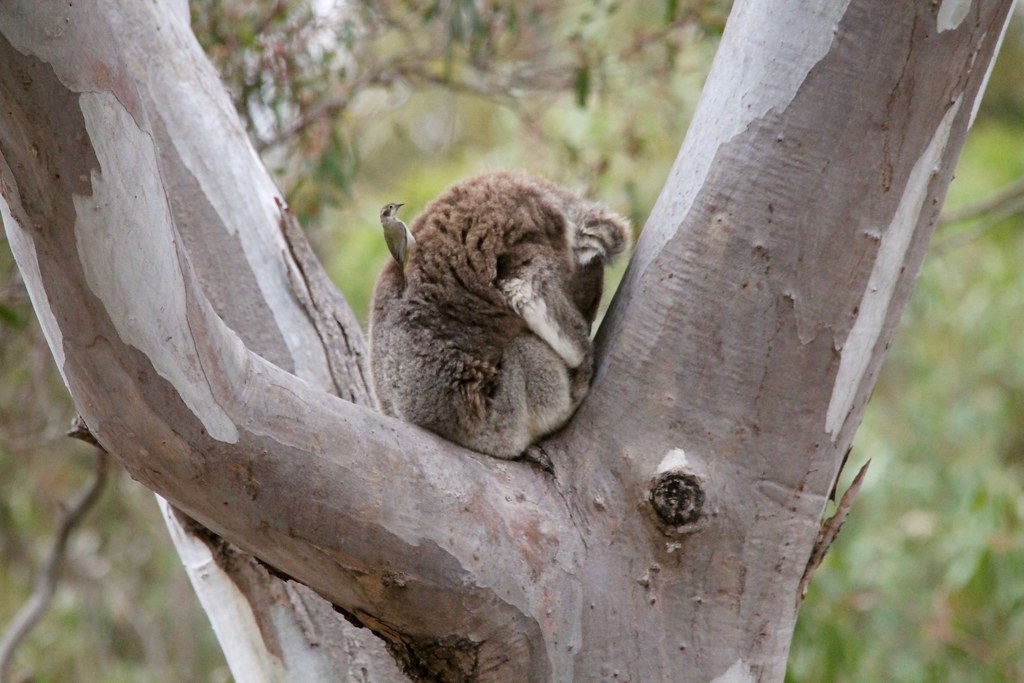 Koalas are amazing.  Even as adults they are impossibly cute, so just imagine how cute they are as...
Read More

5 Reasons To See Koalas In The Wild

In Australia you can still see koalas in the wild, and we aim to keep it that way.  There's even a...
Read More

Koalas are so cute they could be mythical creatures. Maybe that’s why there are many myths about...
Read More

Since the fires began, Echidna Walkabout has dedicated many hours to planning, advocacy for koalas...
Read More

On our Great Ocean Road tour, we usually see koalas every day. But each visit to a wild koala in a...
Read More

Koalas climb trees every day. But that doesn’t mean it’s easy for them. Pat is an old female koala...
Read More