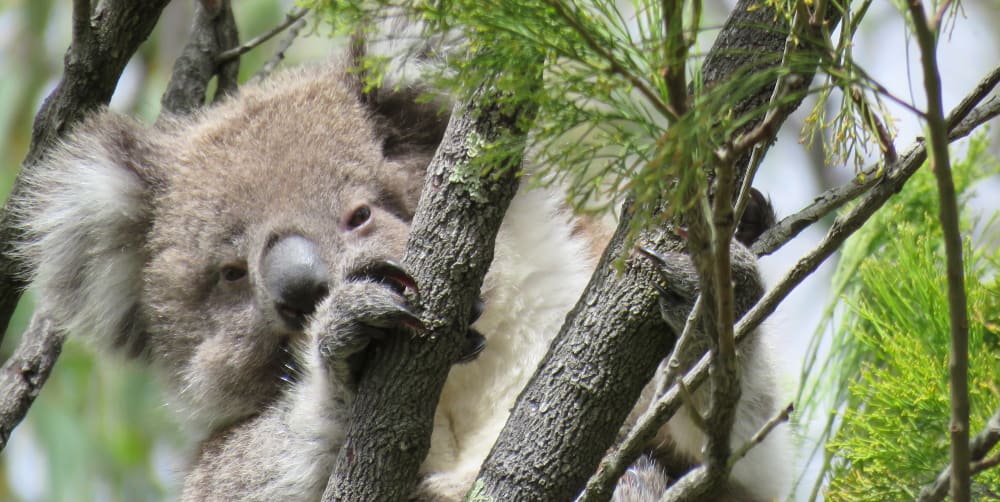 Do koalas have a future in the wild? We think they do.

In the You Yangs near Melbourne, a population of healthy wild koalas have been monitored for 14 years by Echidna Walkabout & Koala Clancy Foundation. The population is declining, but that is not because of the koalas – it is because the trees are becoming too dry and their habitat is shrinking. The koalas are very healthy and are breeding well.

This population has not been affected by bushfires. Nearby, local community volunteers and some very special international travellers on Echidna Walkabout’s Koala Recovery Experience, plant trees beside rivers and creeks to provide habitat for these healthy young koalas. As the koala trees grow, koalas will find their way into a moisture-rich new habitat, planted by Koala Clancy Foundation, that will protect them from rising temperatures and climate change.

Watch how their habitat is shrinking due to climate change, and see the trees we are planting to replace lost habitat. Targeted action taken soon will save koalas and ensure that these wild koalas have a future.

Six wild koala joeys were born in the You Yangs population in 2019. Meet the wild koalas of the future that we are working to save. This tiny darling was the last joey that appeared, and she came as a bit of a surprise. Her mother Wemba is a good mother, and has produced three babies in the last three years, but when we hadn’t seen her by October we were concerned for her welfare.

Yeera might have been a late starter, but she’s quickly stolen the hearts of many. Watch this delightful video of her and little boy Mimi, compiled by one of our local volunteers on a Koala Conservation Day: Sweet Winjku was the first joey to emerge this year, and she’s the one we’ve seen the most often. Winjku is the second daughter of Ngardang and her fourth joey overall.

Unlike her neighbour Mimi, Winjku took her time becoming independent. She preferred cuddling with her mum to taking bold journeys on her own. But now she is off exploring the world, and doing so very confidently. Indi is the shyest of our 2019 koala joeys. She has only been seen a few times since she emerged in July.

She is Kozo’s first joey. Kozo is also quite shy, so its not surprising that she has kept her first baby safe and quiet.

Read about the origin of her name here. Mimi is bold and adventurous. Within a month of emergence he was climbing around by himself, investigating leaves, trying out new branches.  He’s just full of life, just like his mum KiKi.

He first appeared in late July, just a week after his niece Indi.

Mimi’s father is also Gulkurguli, so he is Winjku’s half-brother. Karrborr is a little miracle baby. He is Babarrang’s fifth wild joey. Babarrang is an amazing mother, but she is nearly 10 years old now so Karrborr might be her last offspring.

His father, Bungaleenee, has been dominant male in the area for many years but Karrborr is his first joey for some time. Babarrang’s last joey Burun – in 2017 – was sired by Clancy. Lovely Yarra emerged in August 2019, was seen several times through spring, and then YuYu took her off to a hidden location.  We don’t know all of YuYu’s home range (she is a great traveller) and she frequently disappears like this.  Koala home ranges are larger and more complex than many think.

Yarra is the first joey (that we know) of Zack, who has taken over from Anzac as dominant male.

All Echidna Walkabout tours and tour guests support the future of these wild koalas – through the following conservation actions:

By joining any Echidna Walkabout tour you are helping koalas to have a future in the wild.