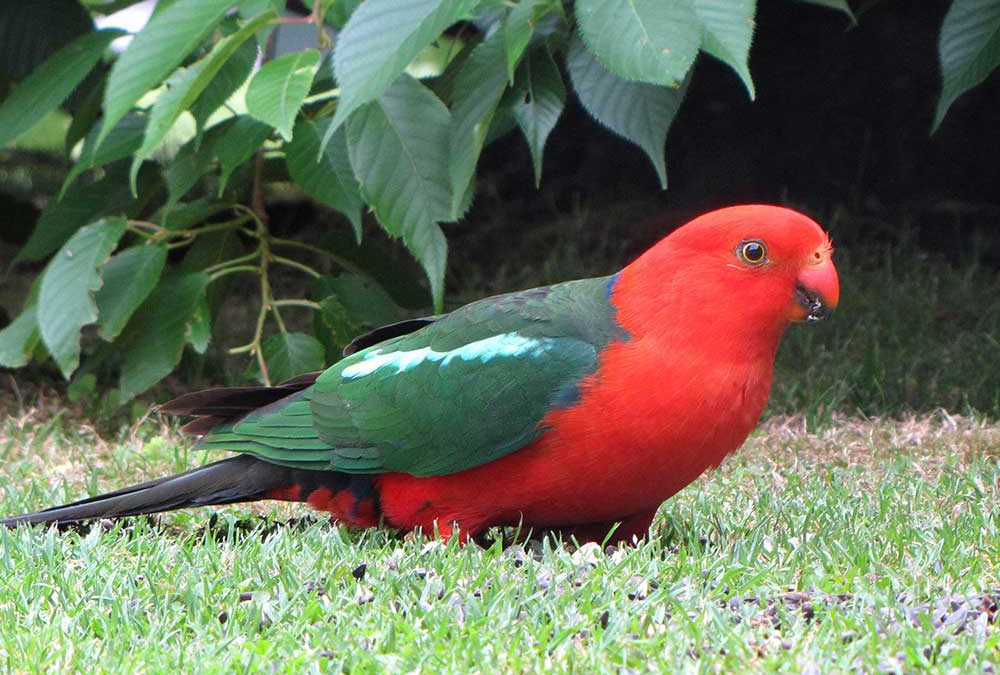 Bird names are a bit like the English language – a lumpy soup of broken rules, throwbacks, dialects and slang. Some birds are named for their appearance: Tawny Frogmouth, White-throated Needletail; for their behaviour: Plains Wanderer, Bee-eater; for their similarity to other birds: Quail-thrush, Cuckooshrike, Fairywren; some for their calls: Laughing Kookaburra, Clinking Currawong and some for the region and habitat they live in: Atherton Scrubwren, Australian Reed-warbler.

Others are named for a combination of features, and some for reasons so twisted and mangled that they are nearly untraceable: Pitta, Cockatoo and the hilarious Drongo.

So when you look at a large, elegant, vermillion and emerald-green parrot, the name King-Parrot seems sensible. The plumage of the adult male is reminiscent of expensive velvet cloaks with shimmering satin linings. A flash of turquoise on the wing sparkles like a diamond bracelet.

Obviously King-Parrots are named for their appearance? Well, no.

Watch this elegant parrot for a while and you will see that they are special. They inhabit the cool, wet forests of eastern Australia. They are sensitive to heat and dryness. High in the mighty eucalyptus forests of East Gippsland you will hear their ringing call, but they are elusive and sometimes difficult to see. The ground level of us mere mortals is a long way beneath them.

If you own a bird feeder, as Sue & Glenn Herbert of Snowy River Homestead in Orbost do, you will meet many glorious Rainbow Lorikeets, Galahs, Sulphur-crested Cockatoos and Crimson Rosellas, who crowd and squabble over seed treats.  If you come on our Wildlife Journey to East Gippsland, you will enjoy this sight every morning!

Rarely, though, will you see a King-Parrot. They will wait until the others have gorged and then calmly appear. They will not squabble. They will not debase themselves. Somehow they know that you have saved a little seed for the most regal of visitors.

Okay, then King-Parrots must named for their behaviour? No, afraid not.

There is another way to name a bird. A name can honour a person. American naturalist Thomas Horsfield has a bronze-cuckoo and a bushlark named after him, artist John Lewin has a rail and a honeyeater, ornithologist John Gould has a finch and a petrel, and royalty are well represented by (Queen) Victoria’s Riflebird and Princess (Alexandra’s) Parrot.

Politicians and heads of state also get their share of bird-names-in-honour. Barack Obama, Indira Gandhi and Nelson Mandela all have birds named for them. But this is not just a recent phenomenon.

According to “Australian Bird Names: A Complete Guide” by Jeannie Gray & Ian Fraser, the name King’s Parrot was proposed by George Caley to honour Governor King. Whether King ever saw or appreciated his namesake is not known. The poor fellow died in 1808, only 2 years after resigning his post as governor and returning to England.