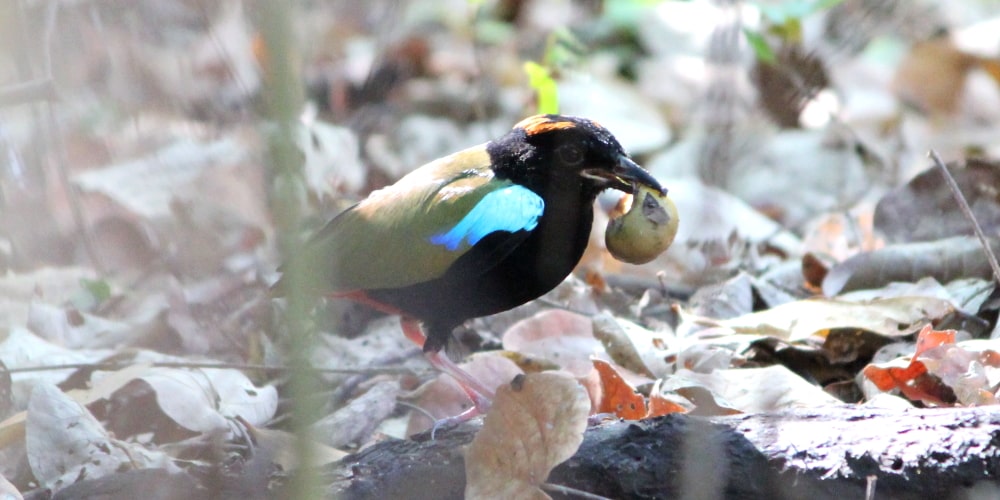 The track through Kakadu beside the East Alligator River is narrow, short and walked by many. It is also one of the most reliable places to see a glorious top end bird: the Rainbow Pitta.

Rainbow Pittas Pitta iris live in the monsoon forests of Australia’s Top End Northern Territory and Kimberley, WA. They feed on the rainforest floor, where their colouring of shadows, sun and leaves make them hard to see. 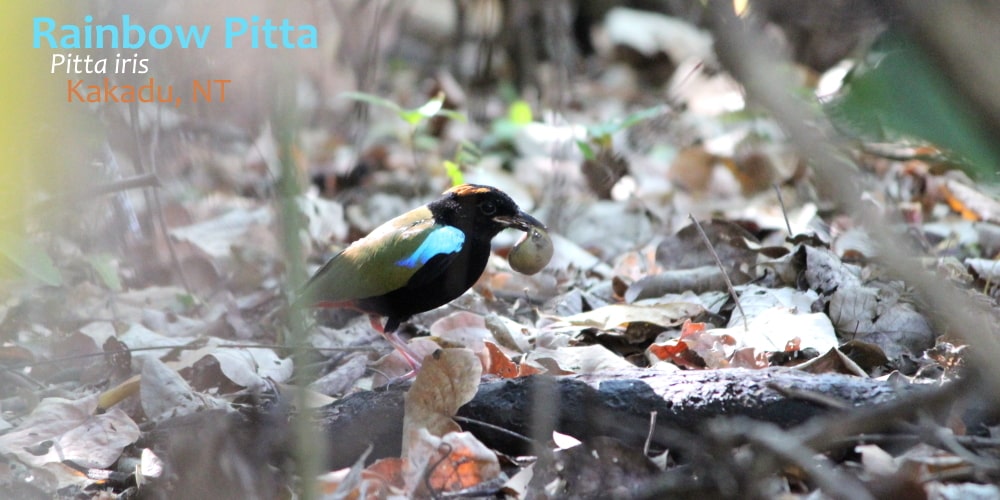 I walked quietly, but it might not have mattered – the two young Rainbow Pittas I came across were content to feed, forage and play in full view. 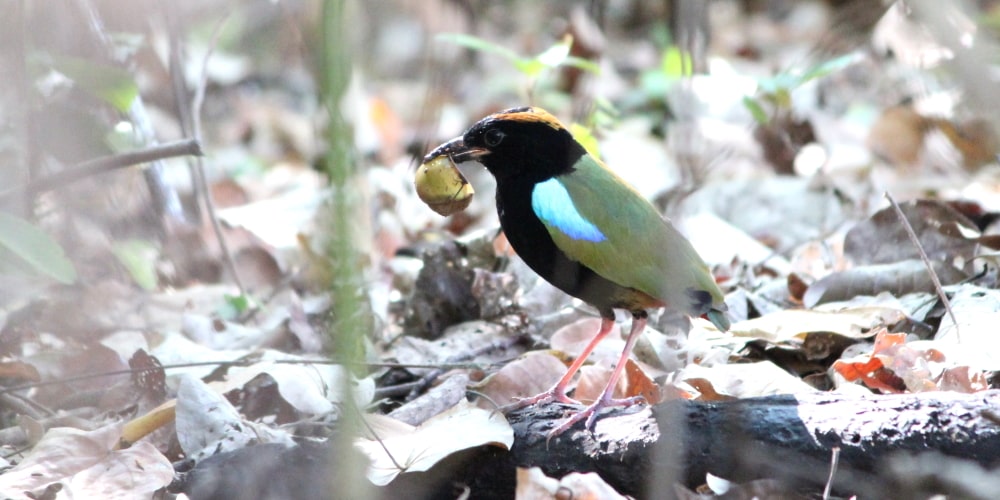 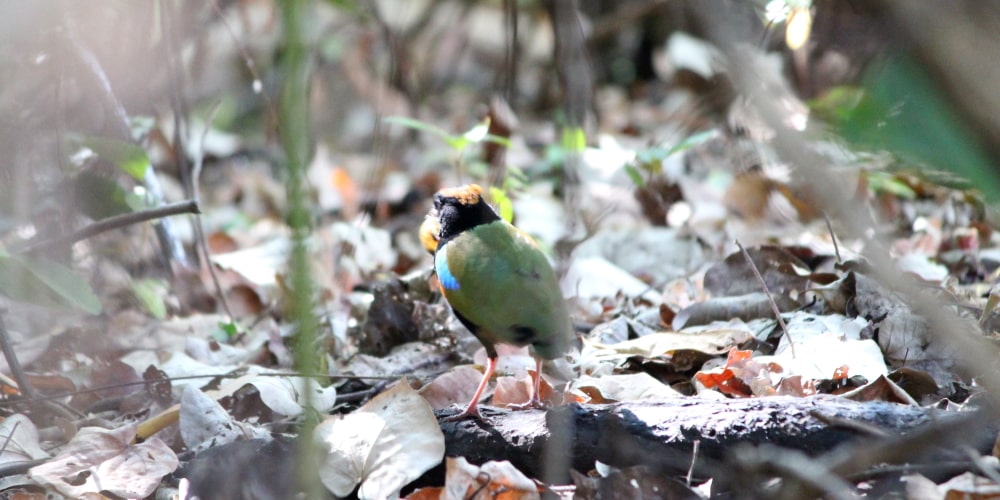 On one side of the track a handsome young pitta had found a snail shell. He picked it up, bashed it against a branch again and again.

Snails are part of their diet, and pittas are known to use roots and branches to break them out of their shells. Watch:

In this case though, the snail shell appeared to be empty. So I don’t know if the pitta’s behaviour was playing or experimenting, or if there was something else in the shell that I couldn’t see.

He had a pale gape (the edges of the beak closest to the face – what we would call lips, but birds don’t have lips), which showed he was still a young bird. Rainbow Pittas retain the pale gape for several months. But his head had the rich chestnut crown of an adult, and his vent (undertail) was bright red. When he reached adulthood, he was going to be a very fine fellow. 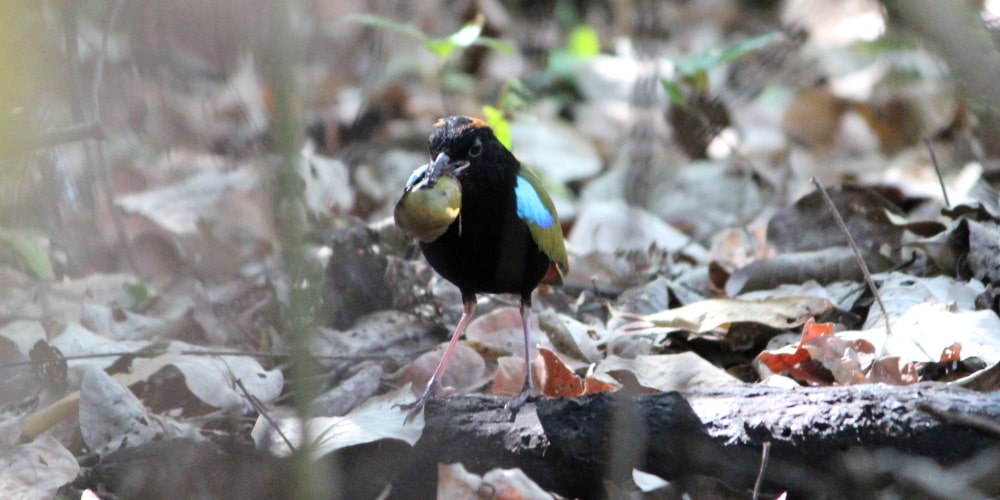 At one stage a Red-tailed Black-cockatoo called nearby, and the pitta stopped his play.

He stood still a few moments, then flicked his wings several times. Watch:

This behaviour is called wing-flicking. Notice that the red undertail is exposed from this angle. From the back, probably the blue wing bars flash. It is recorded as a defensive behaviour in many species of pitta – perhaps the sudden flash of colour distracts a predator.

On the other side of the track, another young bird was foraging. This bird had no pale gape, but a large area of olive on the thighs. Her colouring overall was just a shade duller than a full adult. Possibly she was the same age, and likely a sibling of the first bird. Pittas lay 3 to 5 eggs in each clutch.

Kakadu is an amazing place, where you can see wonders of bird and animal behaviour every day. Read about the playful young Dingo we saw on a recent Wild Top End tour.

Join us on the Wild Top End 6 day tour. Share tours run in August & September every year, and private tours run from June to October.

When you think of iconic wildlife of northern Australia, insects might be low down on your list....
Read More

Platypus are the most elusive of Australian animals. In the rivers of East Gippsland they are not...
Read More

How would you like to walk on water? You can – by visiting the mangroves in Darwin, Northern...
Read More