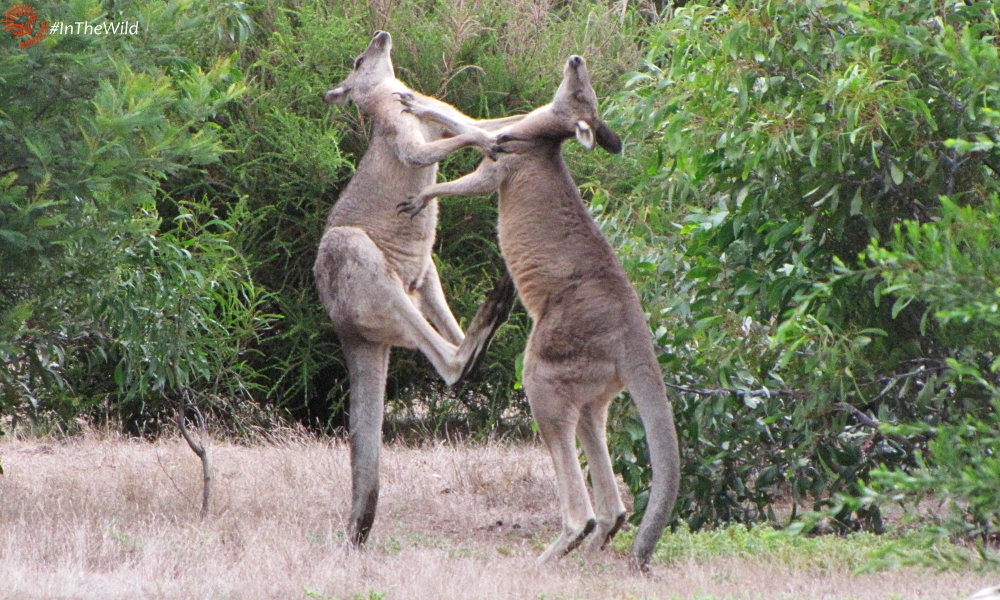 How do kangaroos fight? 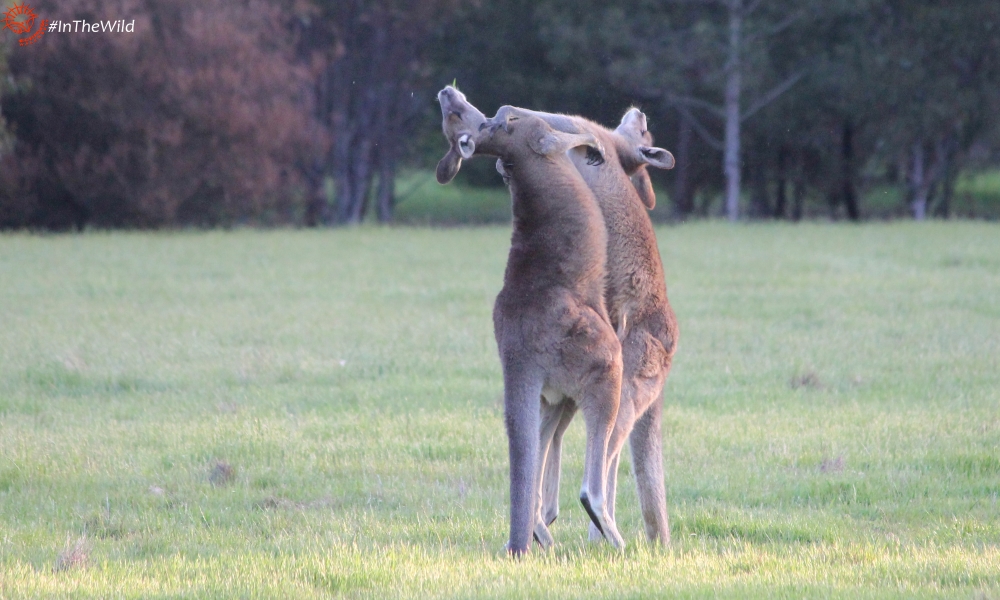 Watching a kangaroo fight is like watching a very strange sport. Their stance and style is quite human – akin to boxers in a ring – circling, punching, grappling. Like boxers, kangaroos spar a lot before they actually fight. These play-fights are common and often seen in the evening in spring and summer in southern Australia. Watch kangaroo fighting on our new Sunset tour.

But when they kick, the fight becomes strange. There is no human equivalent of a double-foot kick whilst balancing on your tail. And its no longer sport when two alpha males fight to the death.

There were strange sounds coming from the kangaroo mob. We felt the danger as we rounded the bend in the road, well before we knew what was happening. The air was rich with a smell that I can only describe as testosterone.

Two huge male Eastern Grey Kangaroos were fighting in the Bush at Serendip Wetlands west of Melbourne. Real fighting. This was not a game.

Huge grey bodies grappled and strained against each other. Their hands lashed out at each other’s heads. Kicks thundered into bellies every few seconds, making the thump sound we had heard.

This was more than a fight for life. This was a fight for the future of their species.  Watch:

Why do kangaroos fight?

Status is established amongst the males in an area by fighting. The ultimate status is Alpha Male, but very few males achieve that. Males can breed without alpha status, but only if the alpha is not around.

The older male had fought this way before, and had won. In winning he had become the supreme sex-god of the kangaroo world. He could have any female he wanted, and no-one would argue. He was Alpha Male.

The younger male had never fought like this before. He had sparred and won, many many times. But that was just practice leading up to this. This was the fight that he, and all male kangaroos, live for. Failure could mean death, but it would be worth it.

For an animal species to adapt and survive, only the best should breed.

The younger male went down. 70+kg of muscle hit the ground hard in a punishing fall that would result in terrible bruising. Seizing the advantage, the older male jumped on him, hitting and wrestling in a desperate attempt to keep him down and end the fight.

I’ve been watching Eastern Grey Kangaroos intently for 25 years – for many of those years I was seeing the same mobs of kangaroos three or four times a week all year. I’ve seen kangaroos sparring often. But I’ve only seen a big fight for Alpha status twice.

When male kangaroos are young they learn to fight by sparring – at first with their mother, then later with other young males. As they get older they establish their position in the mob by sparring with other males. The sparring becomes more intense, lasts longer, and hurts more as they get bigger and more experienced.

Why fight and get hurt if you don’t have to? Many male animals adopt body language and postures to show other males how strong and determined they are. Its a way of saying “I could fight you, and I would win.” Males watch this display and decide whether its worth the effort to fight.

Kangaroo bluff display consists of these moves, usually in this order: 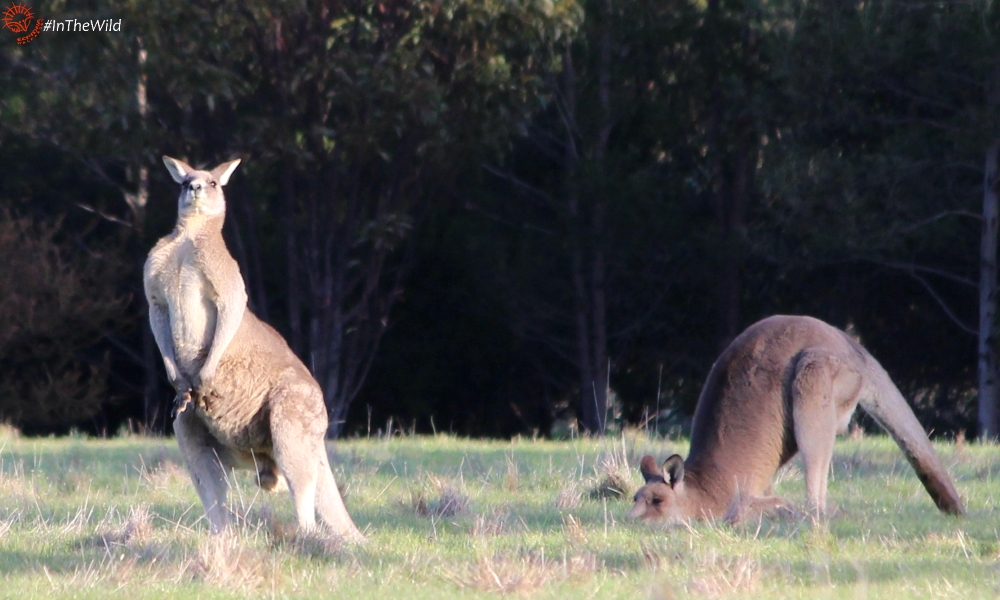 How do they fight?

If all the bluff displays don’t work, and two big males are evenly matched, a fight will occur.

A fight usually starts with one male approaching the other and smacking at his face with his hand. Both rise up on their toes, lean their heads back and hit and grapple each other with their hands.

The next move is the kick. Balancing on his tail, a kangaroo leans back and kicks out at the other male’s belly. Big claws on the feet, and huge muscles in the legs ensure that the kick is painful and damaging. Male kangaroos have thickened skin around their bellies to protect themselves from this, and they can take hundreds of kicks in the course of a fight. A few kicks like this would be sufficient to disembowel a human.

The round of kicking and hitting is interspersed with wrestling as the males try to force each other to the ground. If one falls, the other will press on with the attack, trying to keep the other male down. 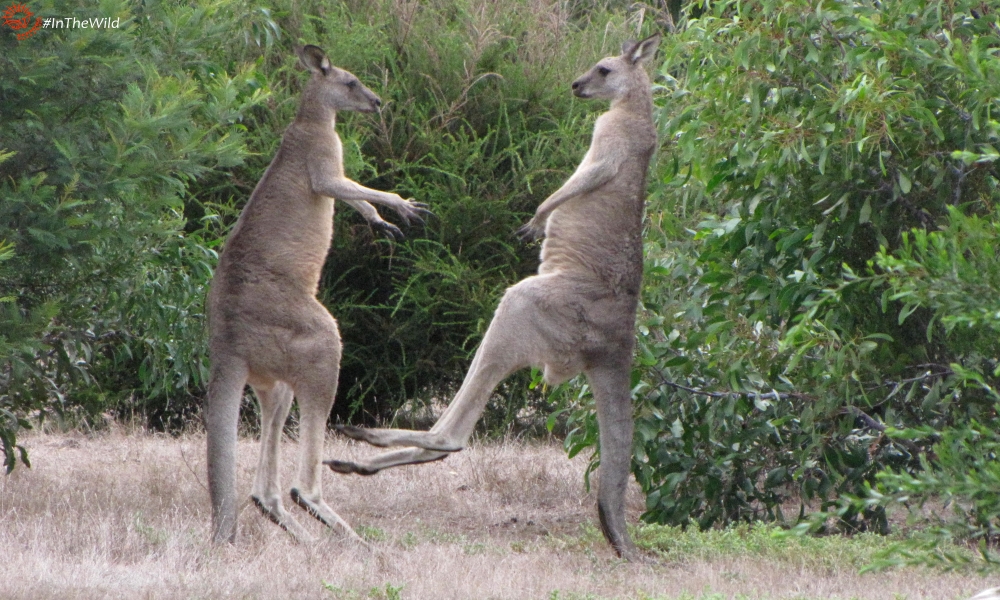 The older male was the better fighter, keeping his balance, timing his kicks well. He was bigger too – access to the best grass had given him muscles like Arnold Schwarzenegger. But the younger male was determined. He fought his way up again and attacked hard.

For 30 minutes we watched, unable to drag ourselves away. The two males fought on and on. They were tired and their chests were stained with blood.

The young male went down again and again, but always returned to the fight stronger and more determined. You had to admire his courage. He was unstoppable.

How does it end?

Finally, after hours or days, one male will surrender. He makes this obvious by coughing. It sounds just like a human cough. He may need to cough several times before the winner will accept his submission.

In time the older male started to falter. He was forced down, and though he fought hard, the young male didn’t let him up. He coughed, but the young male kept at him. He coughed again, trying to creep away. He was finished, he was hurt. He had lost everything but his life.

The young male was also hurt, but his testosterone was surging. He followed the older male as he backed away, trying to fight him. But it was over. He lay down, relieved and sore, surrounded by the females that were now his.

The older male retreated as far as he could manage, then fell over, exhausted. We will never know if he survived, but his days of glory were over.

Some males die as a result of a fight of this magnitude – in a study cited by Jarman* two of six males died after a big fight. Injuries sustained are both internal and external.

This is how kangaroos fight to ensure that only the best – the strongest and fittest, the most determined and intelligent – produce the future generations.

Learn more and watch how kangaroos fight on our Sunset Koalas & Kangaroos IN THE WILD tour.

Mungo: home to families for millions of years

Mungo in Outback Australia has been home to families for millions of years. Mothers have taught...
Read More

Australian summers are hot. Even down in Melbourne, in the southern state of Victoria, daytime...
Read More

Evening at ‘The Billabong Bar’

by Wildlife Guide Janine Duffy In the evening, the billabong comes alive. Like a pub or a bar, a...
Read More

Kangaroo: seen one, tick! Bucket list: done. But what sort of kangaroo did you see? It was just a...
Read More