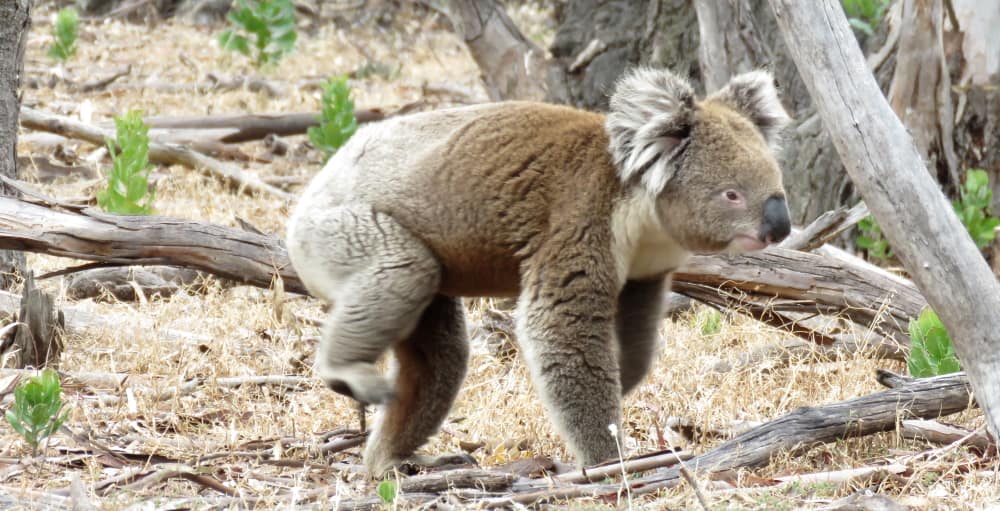 Boneseed (Chrysanthemoides monilifera) is an Invasive Weed of National Significance (1) that has infested the You Yangs Regional Park, VIC since being introduced for erosion control in the 1940’s. It spread rapidly after the 1985 Lara bushfires, and now infests 1300ha of the 2000ha park (2 – Roberts, 2008).

The weed threatens the endangered Brittle Greenhood Orchid (Pterostylis truncata) (3), suppresses growth of native plants and provides shelter for feral species including foxes and rabbits. But until recently its effect on koalas has not been investigated.

Author Janine Duffy noticed, between 2006 and 2011, that koalas were unlikely to inhabit areas with a thick boneseed infestation, even where those areas contained preferred koala food trees.

In 2012 Echidna Walkabout Nature Tours started a program of removing boneseed weed by hand, involving travellers and later, Koala Clancy Foundation local volunteers, from a defined 109 ha area of the You Yangs: Make a Home for Koala Clancy. By early 2019 over 1 million mature weeds, the majority of the infestation, had been removed. Monitoring of the koala population in that area had been ongoing since 2009, and continued throughout and after the boneseed removal. 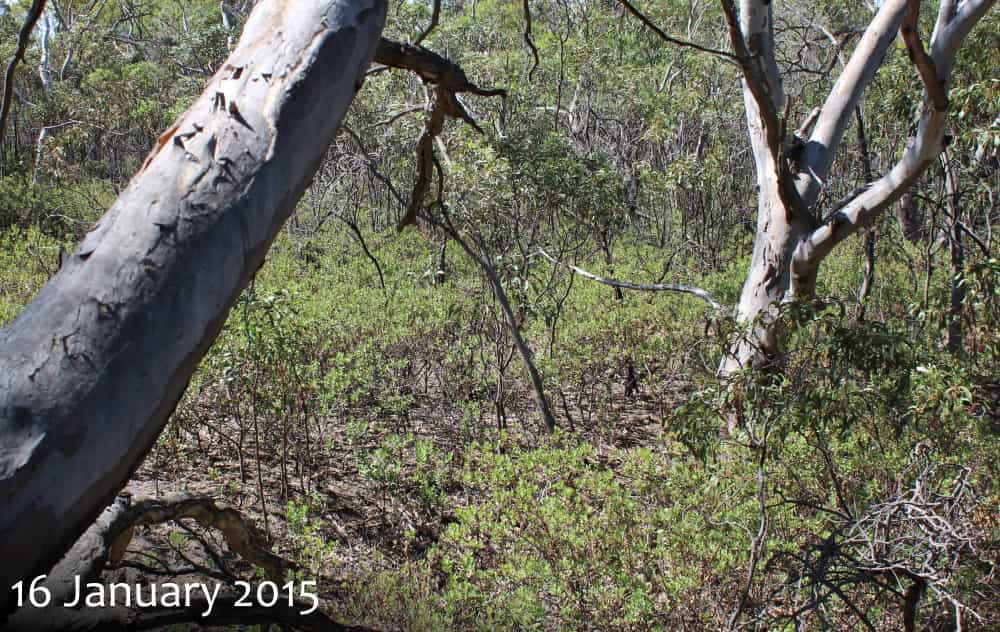 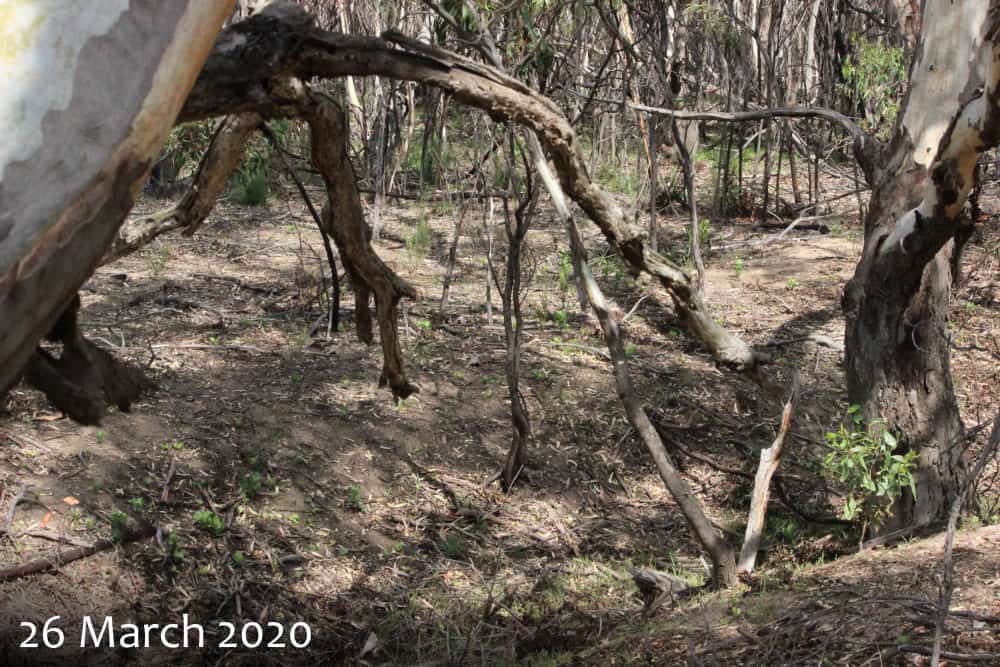 March 2020: Some native plants have established, some boneseed seedlings are emerging

The removal of boneseed in the defined 109ha area has coincided with an increase in koalas overall and an expansion of koalas’ use of the habitat. 2018 You Yangs Koala Report. 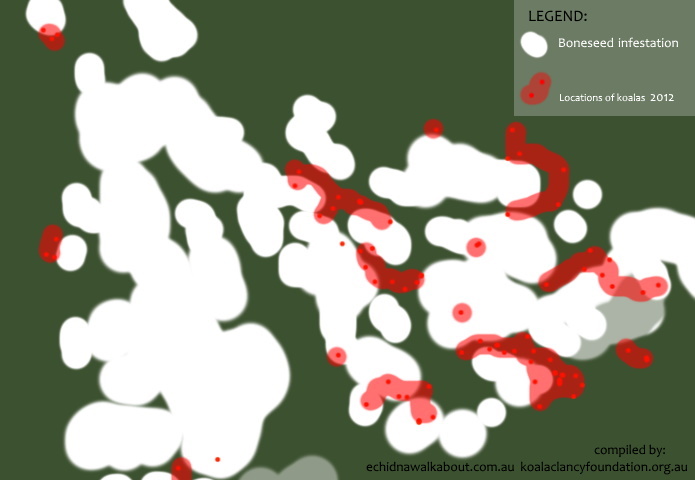 Koala sightings and boneseed infestation in 2012 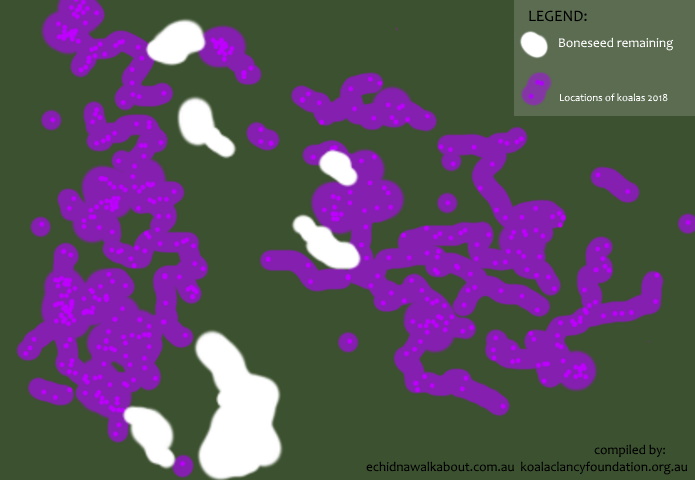 Koala sightings and boneseed remaining in 2018 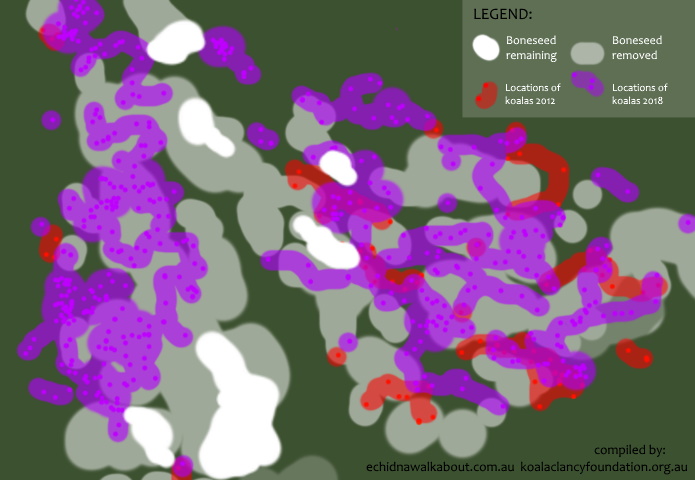 The two maps compiled. Koala use of new habitat where boneseed has been removed has increased

Koalas in 2018 were seen regularly using areas that they were not seen using in 2012.

In addition, koalas were sometimes seen using trees within a week of the weed removal from that immediate area. (5)

It is not known why infestations of boneseed weed would have an impact on koalas. We propose three possible reasons:

“Boneseed has a shallow root system. It can absorb moisture from light summer showers before it reaches the deeper rooting zone of other plants. This gives it a competitive advantage over deeper-rooted species, especially in areas of low summer rainfall.” (3)

Koala’s preferred food tree in the You Yangs – River Red Gum Eucalyptus camaldulensis – has a very deep root system, so could be negatively impacted by boneseed. Boneseed often grows thickly around River Red Gums. The You Yangs area has low summer rainfall, and has been affected by drought over the years of this study (Millenium Drought 1996-2010, 2016-2018).

2) Boneseed presents a physical and visibility barrier to koala movement along the ground, and makes them more vulnerable to predators or rivals.

Koalas are wary on the ground (4: Rus 2020). It is where they are most vulnerable to attack – koala deaths have been linked to vehicles, dogs, cattle and machinery whilst on travelling on the ground.

From ground level, a thick infestation of Boneseed does present a visibility barrier: 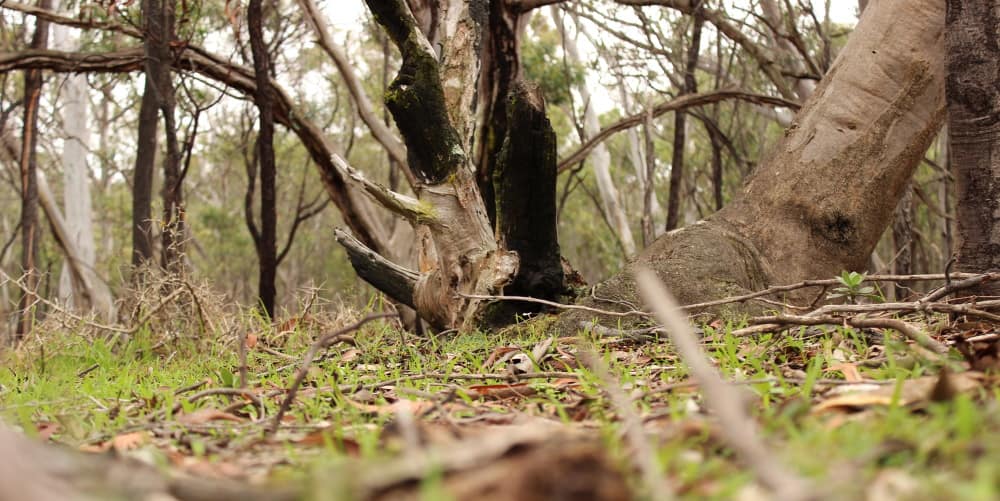 Also, the observations of koalas using trees within a week of the weed removal suggest that their avoidance of the weed may be for a very simple physical reason.

Boneseed does provide a refuge for foxes and, presumably, wild dogs. Many fox dens are found in thick clumps of boneseed. The fleshy fruit are also eaten by foxes. (3)

Koalas may avoid dense clumps of boneseed if they have seen or smelled a dog or fox nearby. Koalas do display increased vigilance to the sound of a dog barking in the You Yangs (5), and it may be that they take steps to avoid areas where dogs and foxes are present.

Hand removal of large amounts of mature boneseed weed in the You Yangs, by international travellers and local community, is having a positive effect on koalas.

All funding was provided by social enterprise wildlife tour operator Echidna Walkabout Nature Tours. Funding has been provided for the koala research project since 2006 in the You Yangs, and from 1998 to 2006 in the Brisbane Ranges. The Make a Home for Koala Clancy weed removal project started with small patches in 2011 & 2012, and is ongoing. Over 650,000 weeds were removed in 2019.

For more information about our methods, or to use any of our findings please contact us. janine@echidnawalkabout.com.au