How To Help An Endangered Tiger Quoll 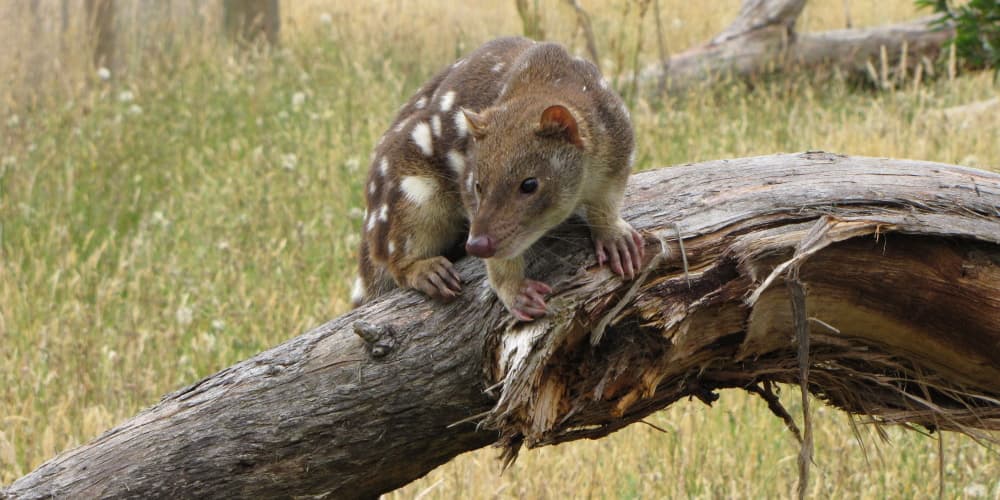 All about Spot-tailed (Tiger) Quolls, their threats and how to help them.

Spot-tail (Tiger) Quolls* Dasyurus maculatus are the largest quoll, males from southeast Australia can measure up to 1.3 metres from nose to tail, and weigh 5kg. They are usually red-brown to dark brown, and are the only species of quoll with spots on their tails.

They live in rainforest, wet forest, dry forest and coastal heathland. They were once common throughout Victoria to southeast South Australia, along coastal NSW and Queensland, and in Tasmania. They are now extremely rare or extinct in most of their former range. Northern New South Wales in currently the only area where they are still in good numbers, and of course that area was severely burnt in the 2020 bushfires.

They breed in winter – mating in June, birth in July. Young are independent by early November.

*They go by several names – Tiger, Spot-tailed, Spotted-tailed or Spotted Quoll are all legitimate.  We prefer Tiger Quoll.

Why are quolls in decline?

The Tiger Quoll is classified as endangered by the federal government. It is estimated that only 14,000 may still be alive, and that number has probably declined considerably.

They require den sites to survive – dens are usually in fairly large hollow logs, rocky crevices, caves, burrows and tree hollows. This means that clearing of mature forest, either for logging or agriculture, is very damaging to them.

Tiger Quolls have very large home ranges (up to 500 hectares), and can travel over 6km in one night’s foraging. This puts them in danger when forest patches are fragmented by farming (as they are on the Atherton Tableland), and where roads bisect the landscape.

Fires, both accidental and planned, destroy den sites and can impact on quoll food sources. The widespread, fierce wildfires of late 2019 and early 2020 destroyed much of the mountain forests, including rainforests, that the Tiger Quolls have left. Even the quolls that survived may be having trouble finding food. Urgent protection for remaining unburnt forest in quoll range is critical.

Like the Thylacine, Quolls have been persecuted since European arrival in Australia. They are trapped and killed by poultry owners, even when relocation is possible.

Quolls are also affected by introduced species: competition and direct predation from foxes and cats, poisoning by Cane Toads. How can we help quolls?

Research is needed on where quolls live, how many there are and how long they live so that conservation actions can be taken.

The Australian Quoll Conservancy is co-ordinating these much-needed surveys. Researchers Alberto Vale & Justin McMahon set up specially-designed remote cameras to monitor the elusive nocturnal animals. They can even discover whether they are male or female, and whether they are carrying young, without ever seeing or catching the quoll. Read about it here.
..

Quolls are still being killed unecessarily all over their range. People who keep chickens need support and education about how to protect their poultry from quolls (which also protects the chooks from foxes, pythons and cats too). This fact sheet shows a quoll-proof chicken coop design: NSW government

AQC run community information sessions, and offer a free capture and relocation service for quolls that have come into places where they are not wanted.
..

Quolls need habitat fragments connected, especially in areas where they are known to occur. AQC’s surveys identify the priority corridors needed, then tree planting follows.  They are currently working on a wildlife corridor to connect Goldsborough and Danbulla National Parks.

Visit far North Queensland with us and James from FNQ Nature Tours, meet the amazing researchers from Australian Quoll Conservancy and help them do this important work. You might see a Tiger Quoll on a remote sensor camera, you might be the one to find a scat or a footprint, or a hair! No matter what, your donation (built in to the tour cost) will be helping Tiger Quolls survive. Quolls Are In Danger: https://theconversation.com/quolls-are-in-danger-of-going-the-way-of-tasmanian-tigers-27744