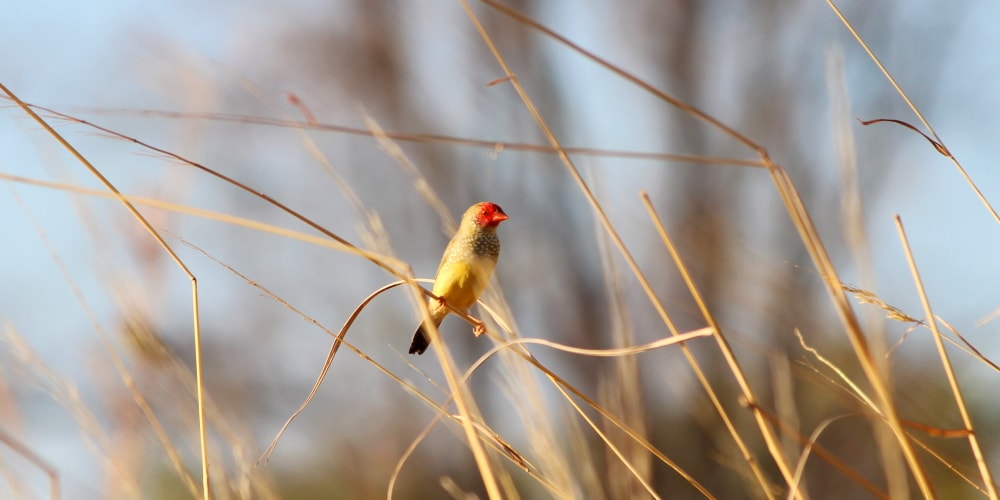 Across a glary blue sky a flock of 30 tiny birds zipped past. They were silent, flying fast and straight, on a mission. All you saw was a flash of gold, or rosy-brown, or white.

They were gone before you had a chance to wonder what they were. Oh well, back to watching the co-operative Red-tailed Black-Cockatoo, Forest Kingfisher, or Rainbow Bee-eater.

What you’ve just experienced was incredible. It happened several, sometimes many times a day in the Northern Territory Top End. The flocks amounted to hundreds.

Hundreds of Australian finches, on a straight line to their feeding grounds up to 14km away. If they would stop, you would have seen that they were glorious. But they were in a hurry. 14 kilometres is a long way for a bird that weighs only 10 grams.

Australian estrildid finches are seed eaters, and most of them (11 of 19 species) live in the tropical grasslands of the Northern Territory Top End. 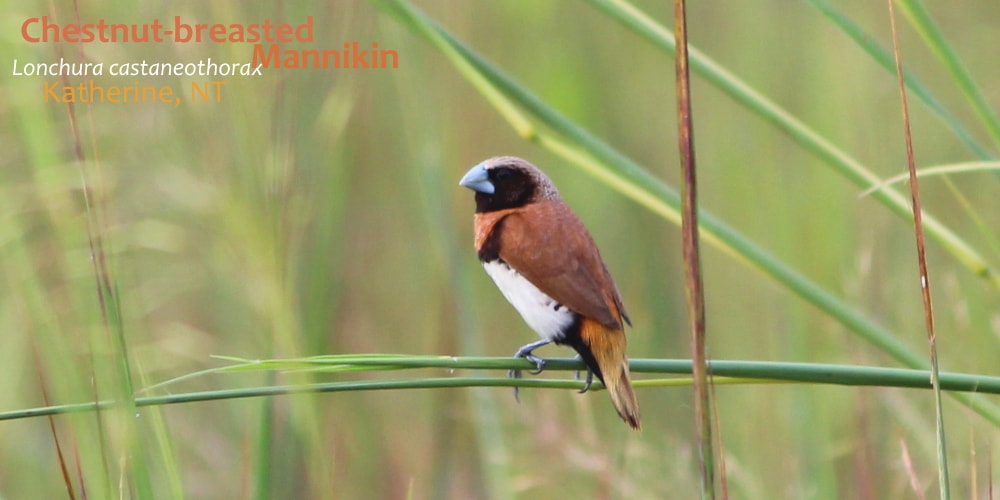 Here are the nine species we are most likely to see, ranked by the number of colours in their plumage: 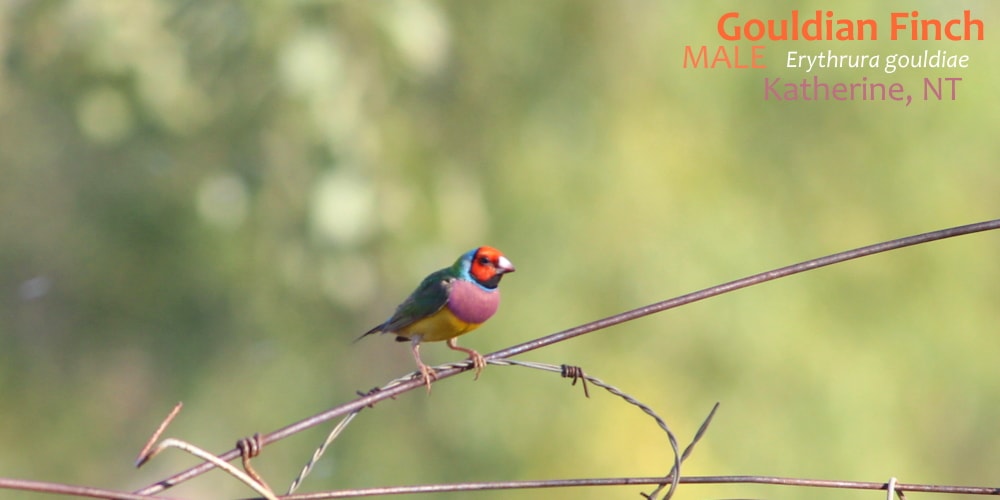 This wildly flamboyant finch is famous as the world’s most colourful finch, and one of the most colourful animals on earth. They are also famous, in Australia, because they are endangered – and seeing one has become a Holy Grail.

Watching them come to a waterhole is one of the most exciting things you can do. Picking out the black-headed males, black-headed females with their lovely muted tones, green-and-gold juveniles, and rare red-headed males as the flock jostles with each other.

The reason for their decline is the pastoral industry – particularly beef cattle (1). Cutting down on beef consumption would help this tiny beauty. 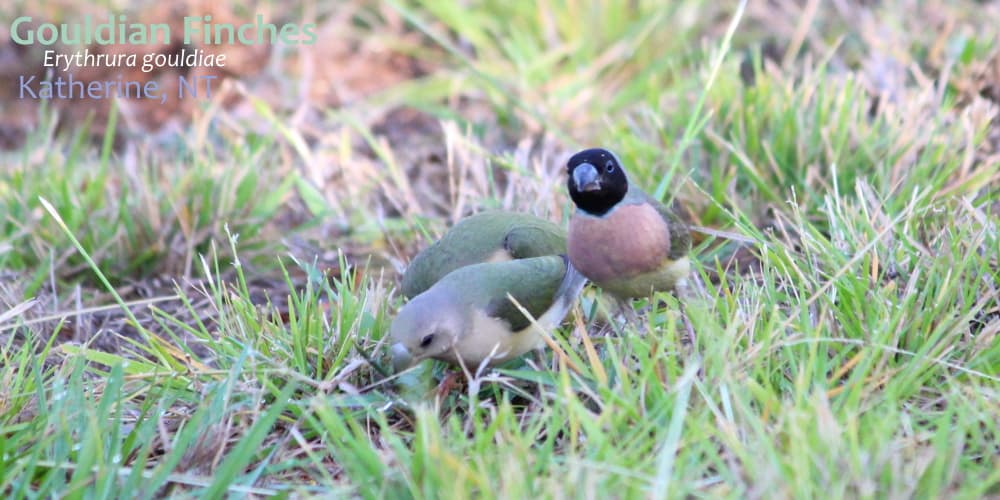 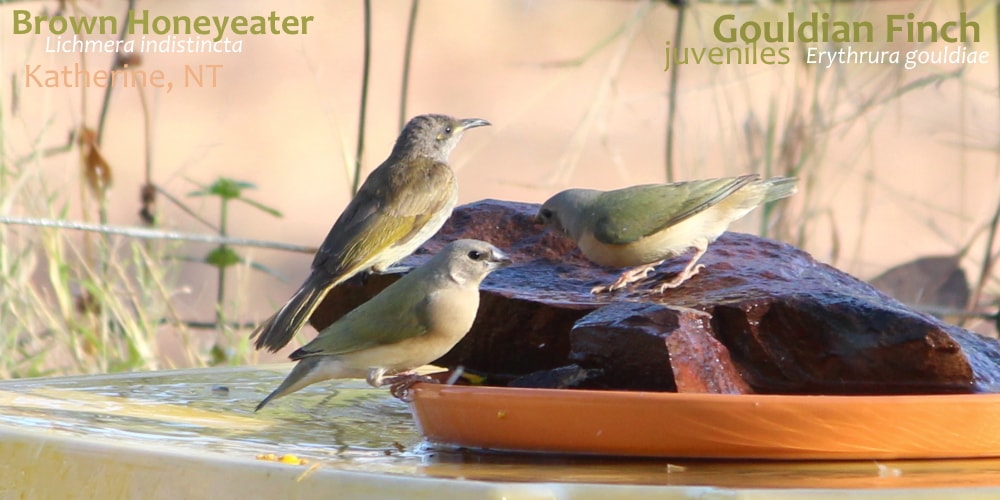 Thankyou to Mick Jerram, Gecko Canoeing & Trekking for the opportunity to see and photograph these beautiful birds. 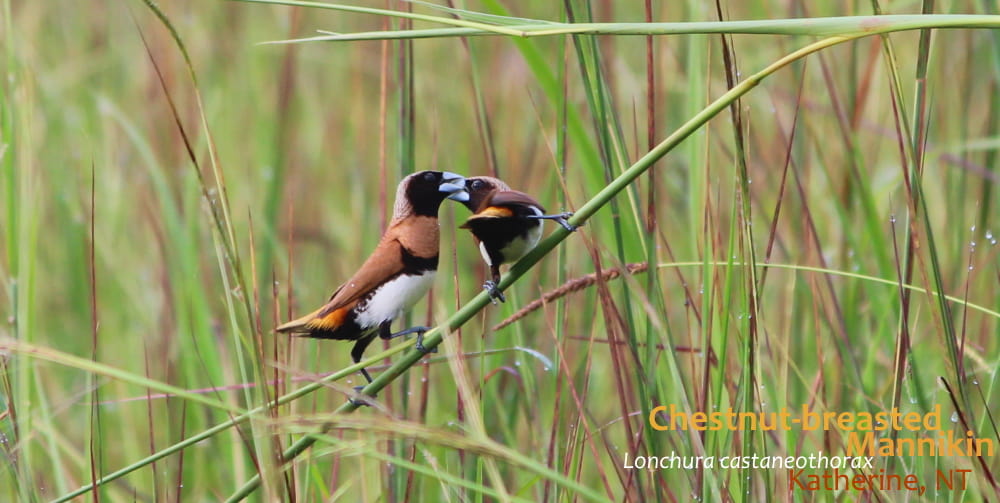 There’s nothing gaudy about this stunner – the earthy tones of chestnut, grey and brown are highlighted with classy black and striking white. In the wet season they simply glow.

Chestnut-breasted Mannikins are most often seen in wetland areas, where grass grows thick and green. In dry season many in the flock are juveniles in their plain brown plumage. 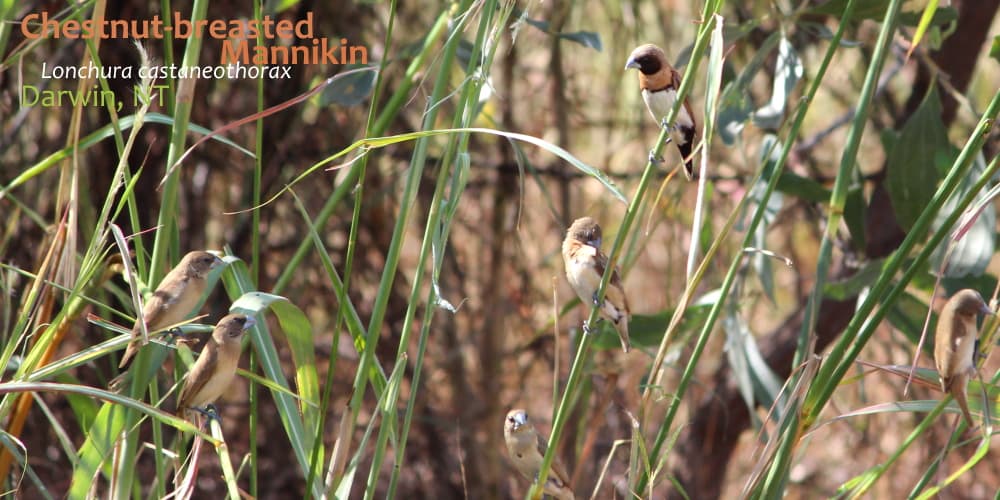 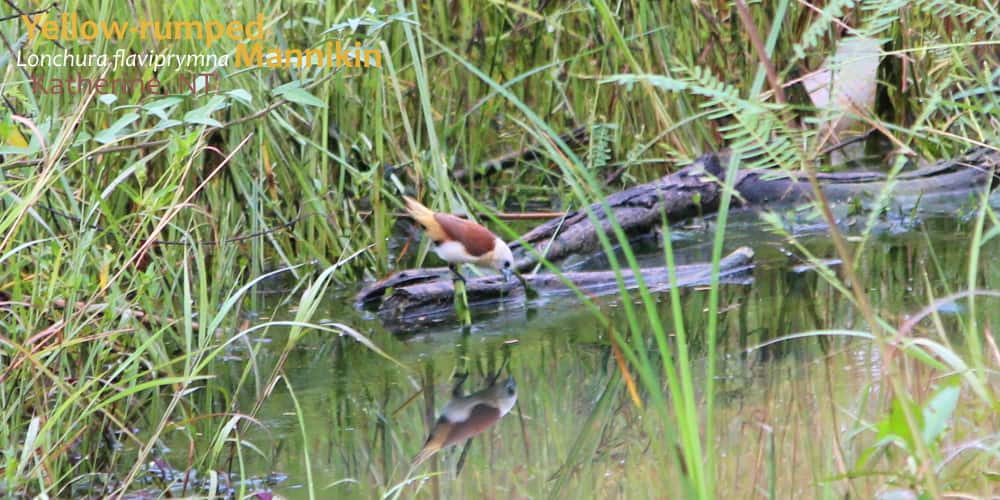 One of the hardest finches to see in Australia, the Yellow-rumped Mannikin has a special place in my heart. The first time I saw one was in Katherine, in the wet season 2018, on a short morning walk in town. Small bird chittering drew me to a water culvert between the racecourse and the road, where a pair of Yellow-rumps were drinking and mucking around with some Chestnut-breasteds. I couldn’t believe my eyes – and quickly sent a text message to friend, Katherine bird expert Marc Gardner for confirmation.

Marc confirmed, and subsequently recorded the birds breeding at that site. He and Mick Jerram took a wonderful series of photographs of them which feature on the eBird official page for the species: https://ebird.org/species/yermun1

This wonderful group of Yellow-rumps stayed reliable until April 2018, drawing birders from all over Australia to Katherine. They returned to the site in 2019 wet season. Hopefully they breed there again. 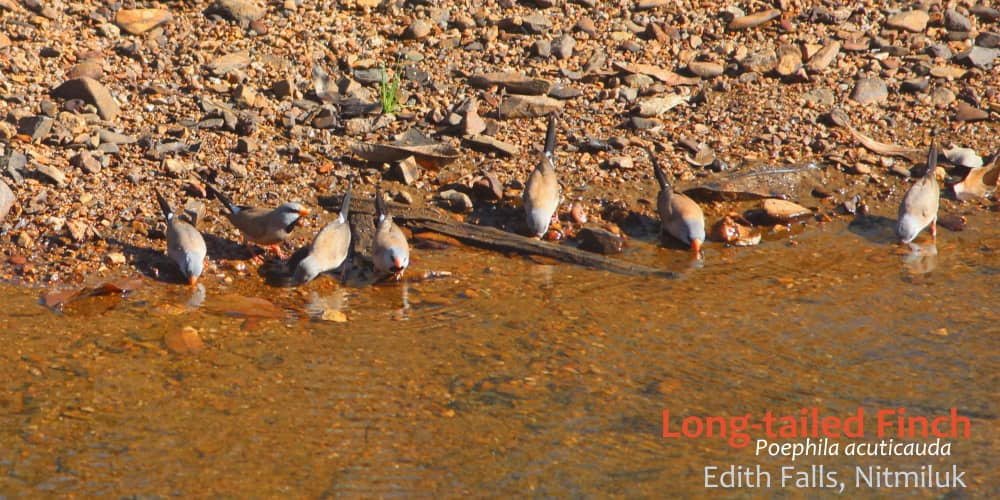 A really striking and beautiful finch. In sunlight they glow with a rosy tone, accented by their red beak. The long tail for which they are named is not much longer than the Masked Finch, and has the same markings, but their black bib, red beak and grey head is diagnostic.

We have noticed that Long-tailed Finches tend to arrive at Northern Territory waterholes in a small group of two or four, who perch on a tall tree and wait a bit. After five to ten minutes larger groups arrive, also perching. Finally when many have congregated they start to come to the water’s edge to drink. Are the original birds lookouts? Do they communicate whether it is safe? Long-tailed Finches are known leaders to water, with Gouldian Finches most likely to follow them down rather than lead. (2) One of the most exciting finches to see in Australia. Star Finches glow golden in the late afternoon Northern Territory light, in the tall blonde grasses they feed in. A feeding flock can number hundreds, and make so much noise moving through the grass that you could mistake them for a mob of wallabies.

They are surprisingly confident while feeding, and if you stand still and quiet, they accept you and move around you quite naturally. One of the greatest moments of my life was standing amongst tall grass near Policemans Point in Timber Creek, with Star Finches on three sides – every few minutes one would jump up on a grass stalk to check me out, then resume feeding. 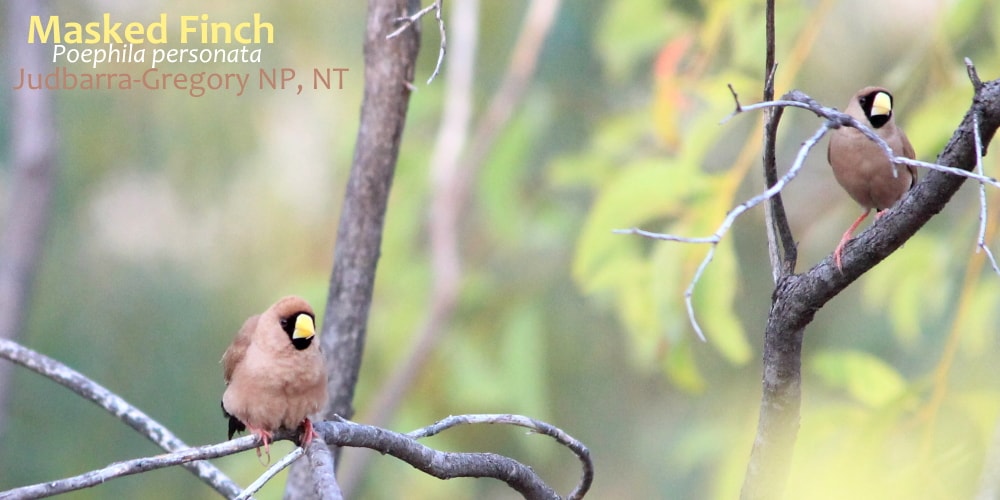 A brunette cutie, with a comical, huge yellow bill.

Unlike the closely-related Long-tailed Finch, which they are often seen with, Masked Finches glow golden-brown. They also have a long tail strongly-marked in black and white.

Our little zebras are a more likely sight in the southern Top End, around Katherine & Timber Creek where their favourite habitat – arid and open grasslands – is common.

Their markings are so complex, its a delight to look at them. The ‘zebra’ is in the tail, which is black and white striped. Their chin, neck and breast are very finely barred black and grey. On their sides they have white spots on an orange background.

The face of an adult male Zebra Finch is so old man: flushed orange cheeks, a handlebar white moustache and a sparkling orange eye makes them look an aging professor who has had too much red wine. 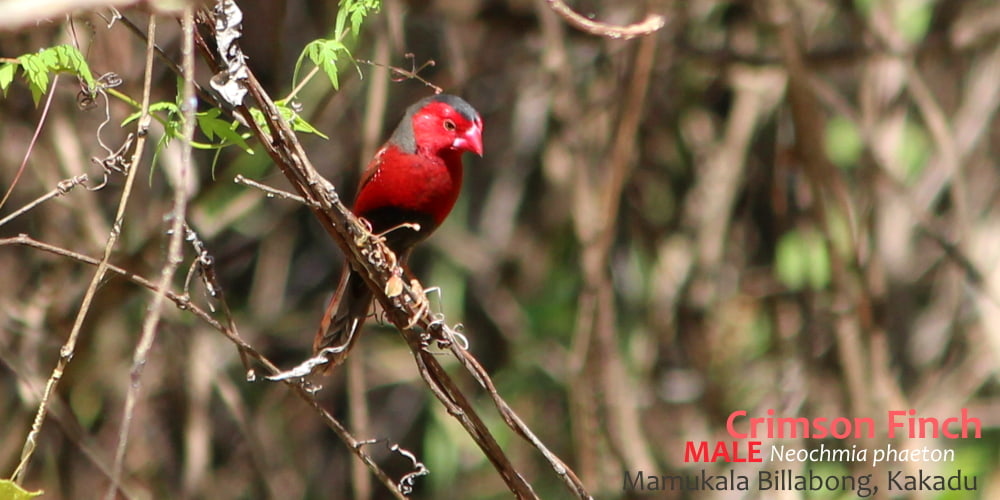 Only three colours, but wow! The adult male Crimson Finch is really that: crimson. Red face, red beak, red breast, red tail and red wings. A patch of black on his belly sets it off, and a dark grey crown and nape.

Crimson Finches are one of the first finches you will see in the Northern Territory. They live on floodplains like Fogg Dam and love Pandanus trees – which they will appear from and retreat to like magic.

Females and juveniles are more brown-grey, but all have the red tail. 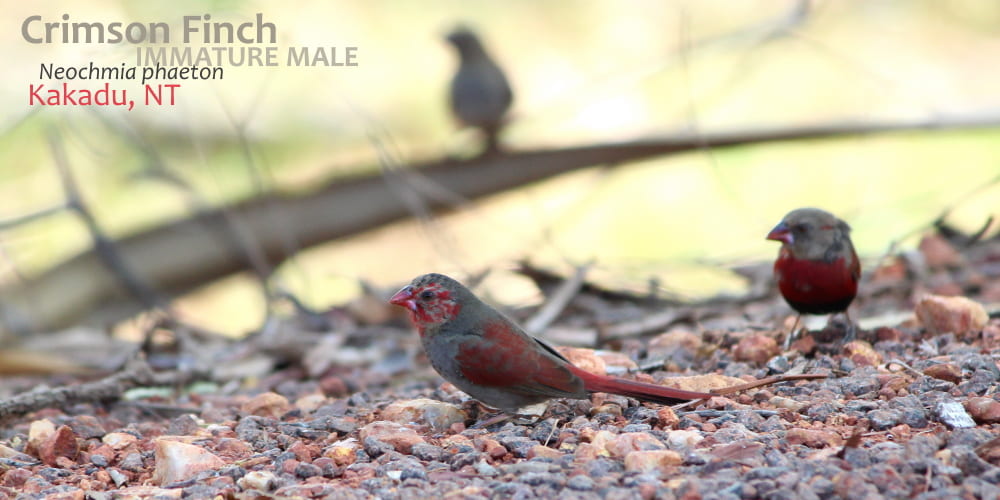 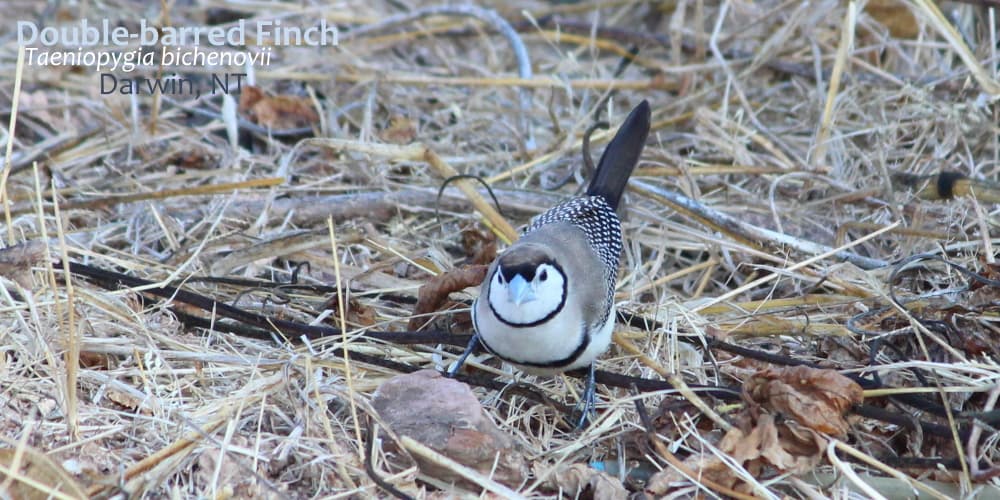 Their darling little faces are pure white, edged with a black line, and they have a black eye. Their bellies are white, tail black, their backs grey, and on their dark grey wings they have tiny white spots.

Double-barred Finches are very successful. Many Darwin people have them in their yard.

Visit the finches of the Northern Territory, and many other birds, mammals and reptiles, with us in 2020 on the Wild Top End or Maximum Wildlife tours. On a recent Maximum Wildlife private tour we saw all nine of these finches.

The Katherine Bird Festival is held each year in September and is a highlight of the Australian birding calendar.  The 2019 festival is coming up soon: September 12 to 15.  Katherine is a real hotspot for finches and other Outback birds including Budgerigars, Hooded Parrots, Cockatiels & Red-tailed Black-Cockatoos – we can’t wait!

We highly recommend Gecko Canoeing & Trekking for their expertise in the Katherine, Nitmiluk region of the Northern Territory.  https://geckocanoeing.com.au/

Mear Origin of name: Mear is named to honour the Mear balug clan of the Wathaurong/Wadawurrung...
Read More

Waa Origin of name: Waa is the name for the Raven/Crow in Wathaurong/Wada wurrung .. Known since:...
Read More

About female koala joey Winjku, living wild in the You Yangs near Melbourne.

Indi Origin of name: Indi is one of the traditional Aboriginal names for the Murray River that...
Read More

Mimi Origin of name: Mimi is named to honour the Mimi spirits of the Top End. Mimi are lithe,...
Read More

Yeera Origin of name: Yeera means joyful, which she is!  The name has an Aboriginal origin, we...
Read More