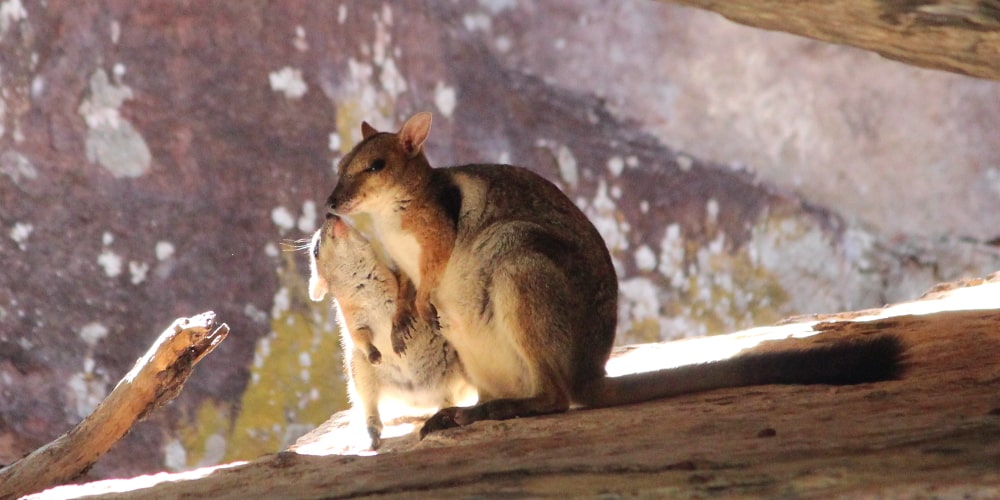 Rock Wallaby? What is a rock wallaby?

A wallaby is a well known Australian animal, and a member of Australia’s national rugby team.

Normally when you put the word rock in front of something it makes it harder and cooler.

So by definition a rock-wallaby must be a very tough wallaby with great talent and audaciousness. 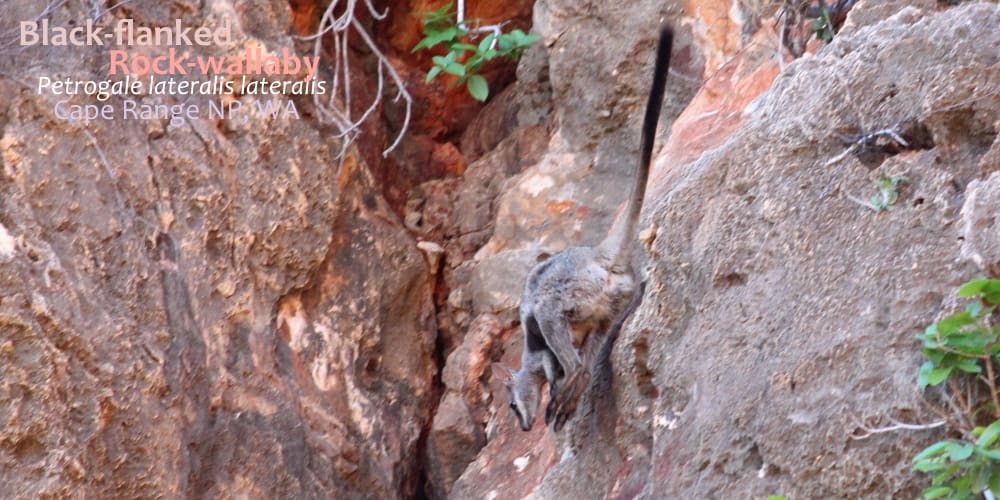 These guys eat hot and hostile for breakfast. Well, not really – they eat fig leaves and grass mostly, but you get my meaning.

Rock-wallabies see a near-vertical smooth rocky slope, and call it … home. Every day and night they are up and down it with confidence and skill. 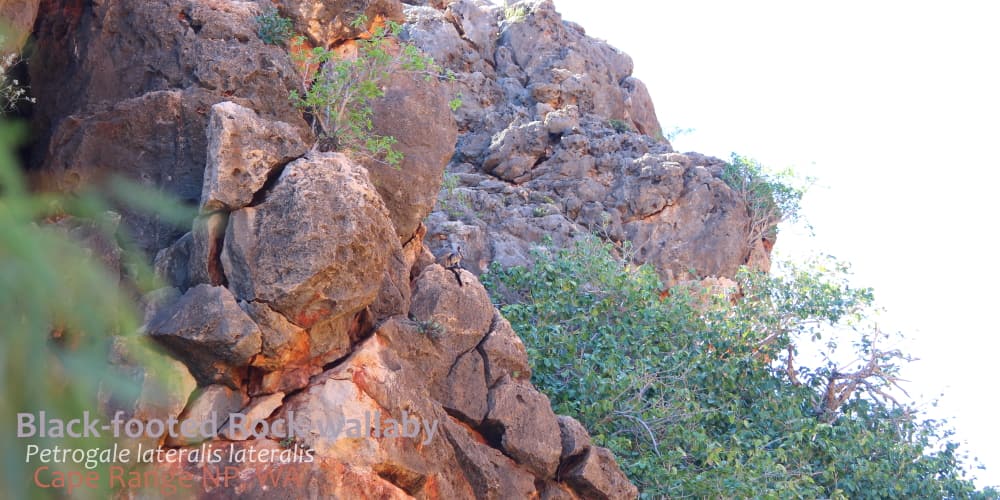 Hopping, which is normal for macropods*, is a gait with great agility.(1)  All the kangaroos and wallabies can turn mid-stride, hop up or down, and have great balance. But rock-wallabies have some special features that enable them to balance and climb like … a rock wallaby!  *What’s a macropod? find out here.

Like Snow Leopards, who also live in rocks, rock-wallabies have dressed up their toughness in unbearable cuteness. 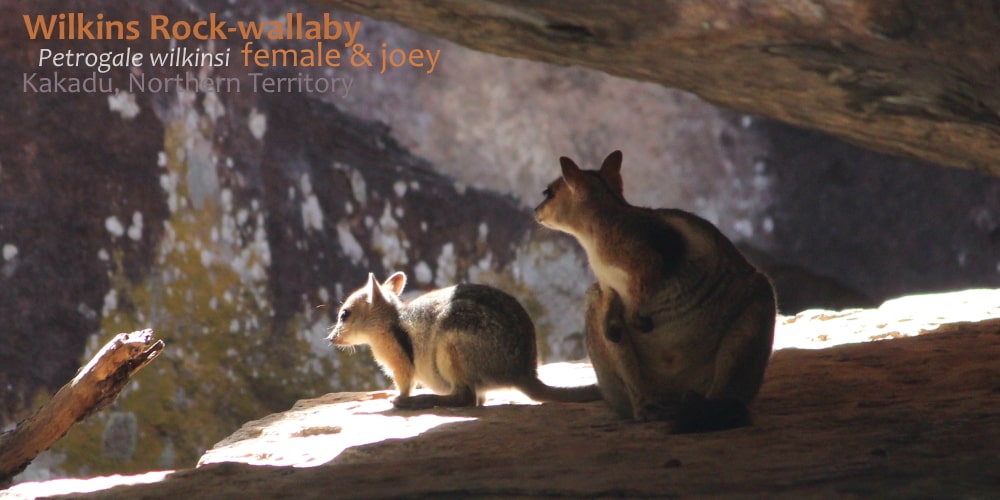 They have the cutest feet you’ve ever seen. Long, furry, with small claws like a plush toy. The soles of their back feet are tough skin that is deeply ridged. The toe claws are shorter than their non-rock kangaroo cousins, probably because a long claw would slip on rocks. The hair on the feet is really thick and forms a brush around the fleshy pad.  This page has a really cool comparison of feet of wallabies, including rock-wallabies

Compared to other wallabies, rock wallabies have a very small upper body, and two proportionately long feet and a very long, flexible tail that forms a tripod in any situation.

In some ways they are like a Croquembouche with a tail. But less sticky. 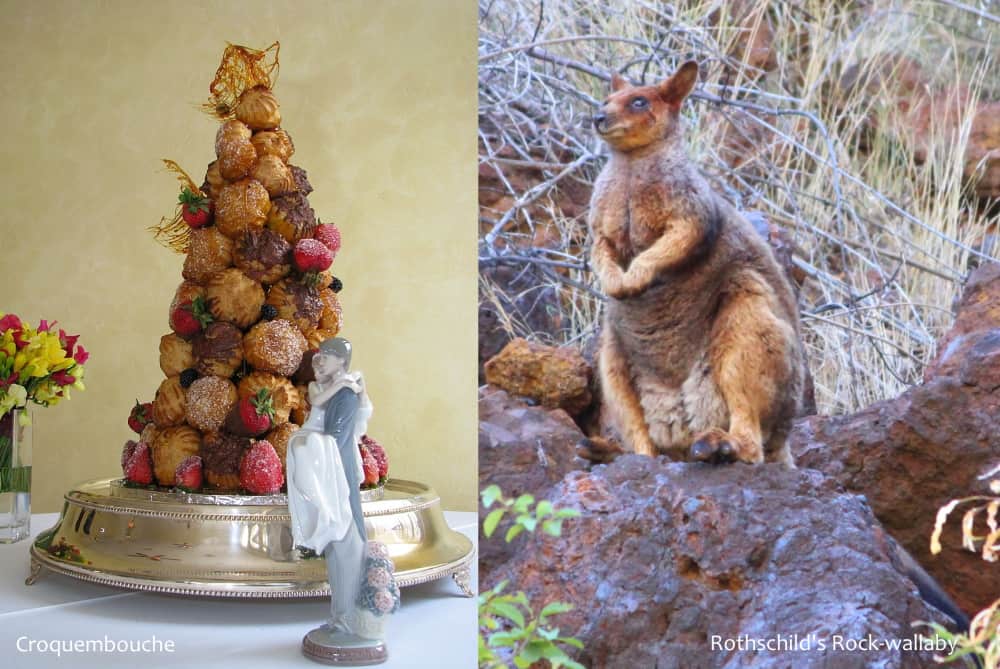 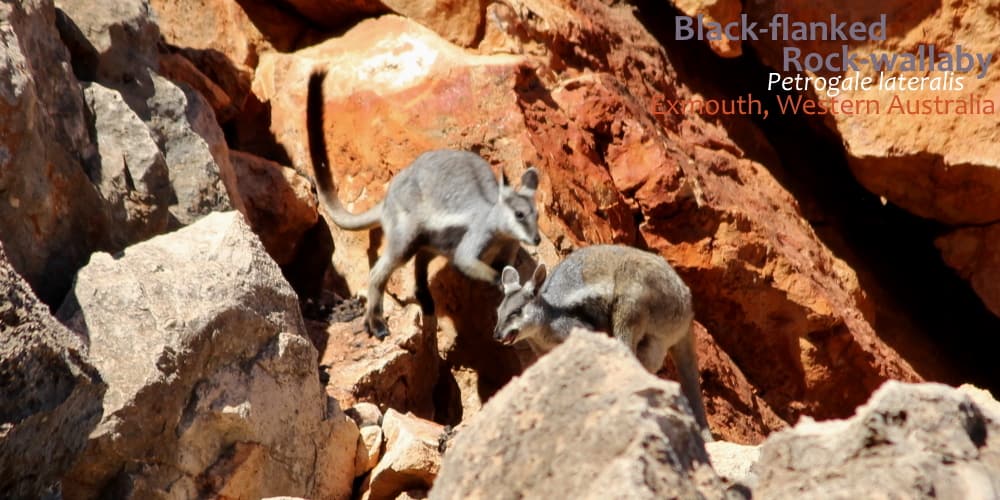 Rock wallaby tails are mega! Long, cylindrical and highly flexible, they are held curved above the body when hopping, like a question mark. ?! On landing on a rock, the tail usually drapes over the edge like an anchor. In difficult situations, the tail can be held straight out.

Rock-wallaby tails have a brushy tip, which gives them a bit of a wallaby mullet*.  *mullet: an Australian men’s hairstyle where the hair at the front is short, and the back is long. 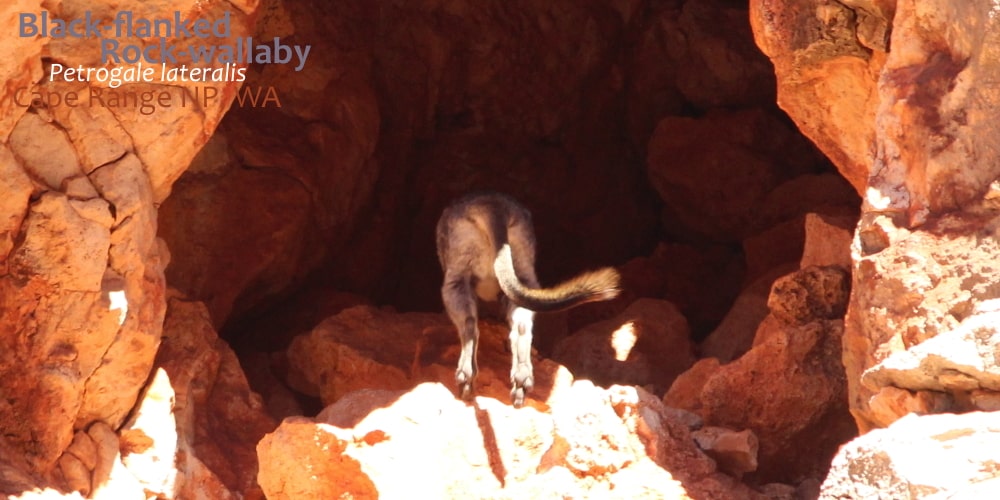 Here’s a bit of detailed information about the four coolest* rock-wallabies in Australia:

*coolest: allright we admit, this is a highly subjective list 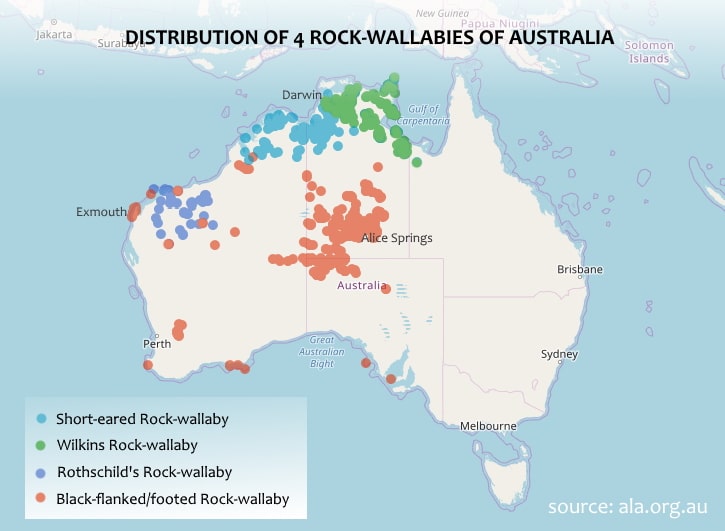 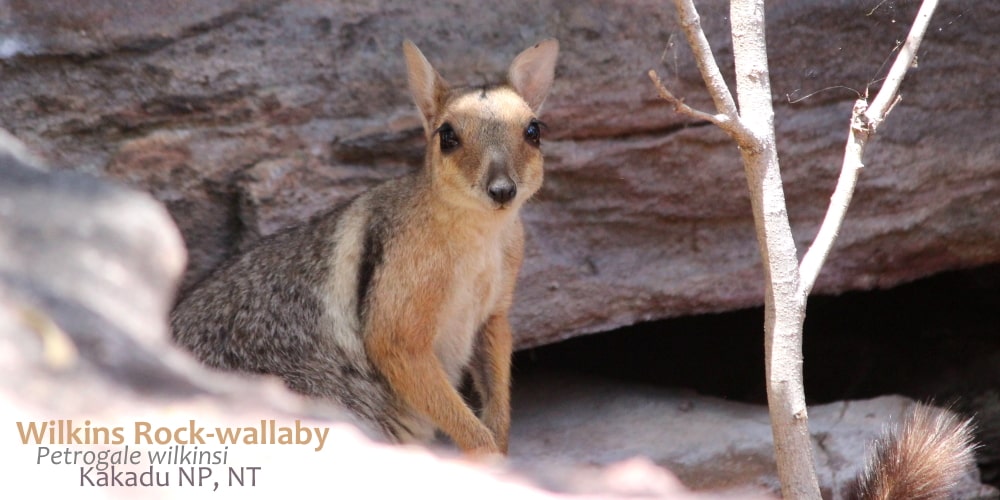 Like a living flag of the Northern Territory, their arms, shoulders and neck are bright rufous-orange; their back and tail charcoal black, and their bellies white. Both males and females have a dashing white boob tube (underarm stripe).

We see this delicate rock-wallaby on most of our Wild Top End tours in the Northern Territory.

Wilkins’ are the smallest of the cool rock wallabies in this post. They are brighter and smaller than their cousins the Short-eared Rock-wallaby, from which they have recently been separated.

Read about their lifestyles (and see more pics) here. 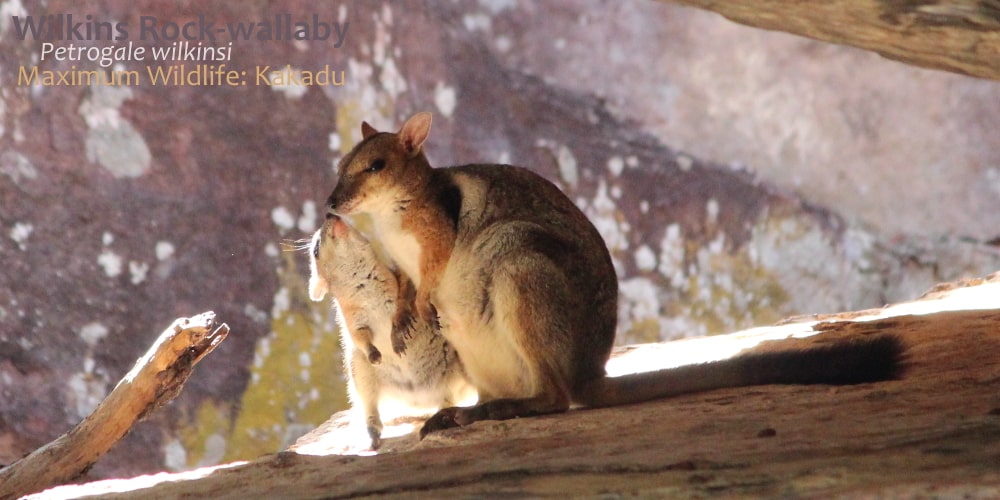 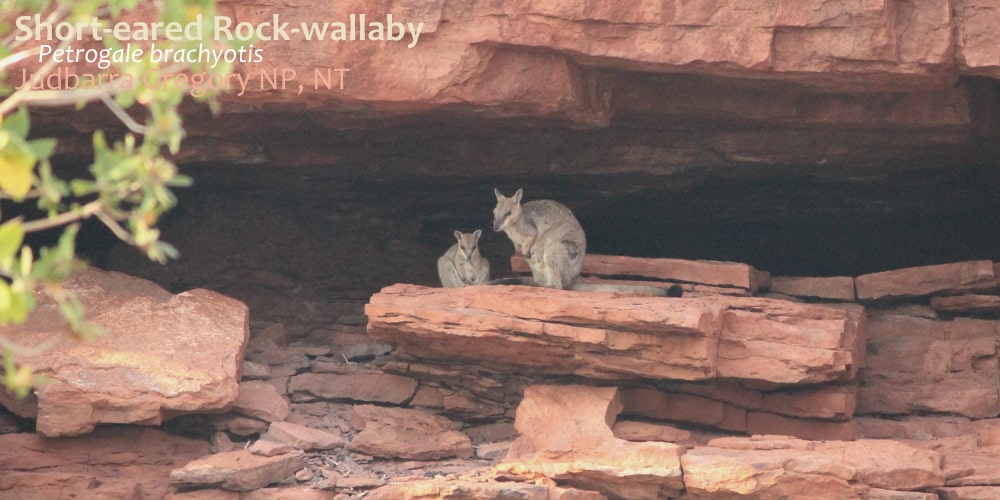 I can’t help thinking of Buffy The Vampire Slayer when I see these small blond beauties. Cute, unassuming, unafraid.

This rock wallaby is larger than Wilkins, lighter-coloured and less strongly marked. You can see from these photographs that they completely lack the white boob tube, and have washed-out facial stripes. Like Buffy, they don’t need make-up to be beautiful.

We saw this adult female and joey, and another individual, in the Victoria River district, Northern Territory. These rock wallabies have been found to be quite different to the Short-eared of the Kimberley, WA, but too few were able to be studied. Early findings show that these wallabies are the palest and plainest of all the Petrogale brachyotis group.

I wouldn’t call them plain to their face though, especially if you’re a vampire. 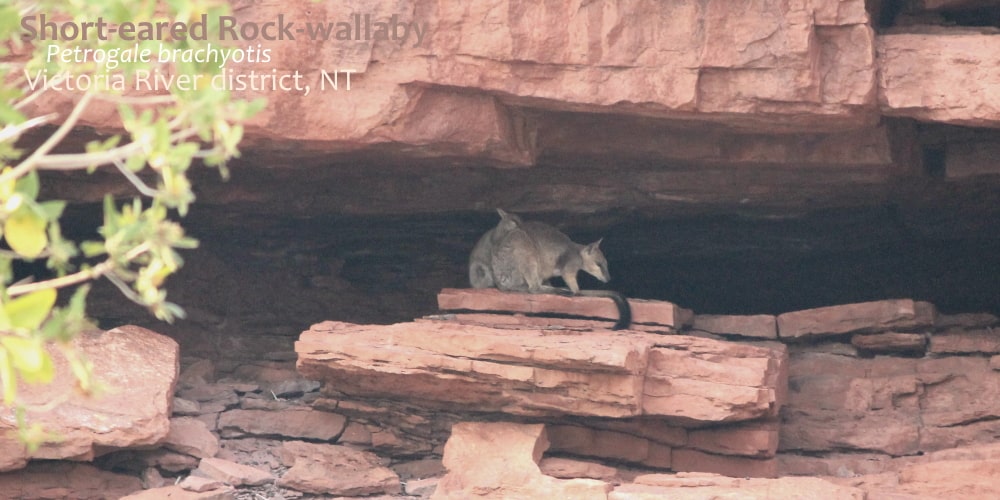 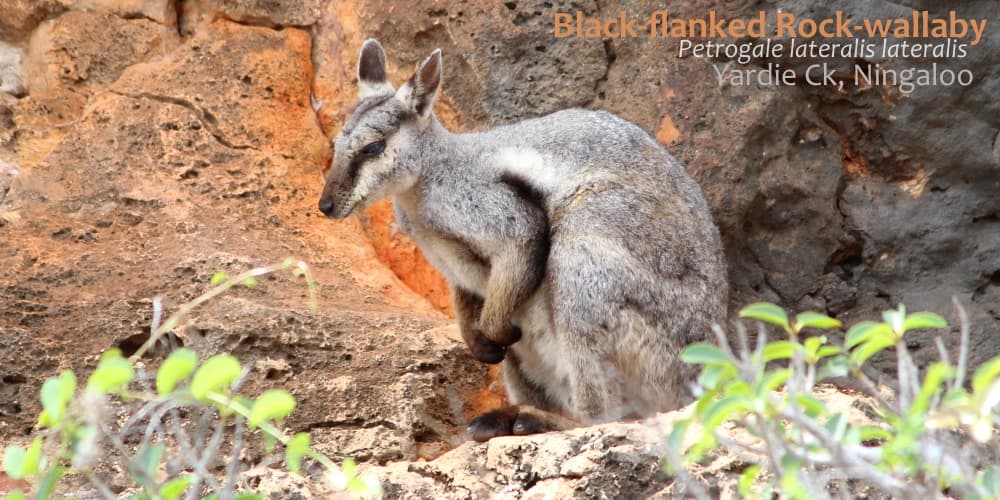 If James Bond was a rock wallaby, he would be a Black-flanked.

These dapper little wallabies navigate the cliffs and chasms of the Cape Range, Ningaloo Western Australia without ever dislodging their bow ties. Or their black gloves.

Black-flanked Rock Wallabies are clad in elegant silver and black tuxedoes, with crisp white shirts.  Their tails are black.  Of course.

These wallabies were once widespread through the Outback and the West, but now live in isolated pockets, and are endangered.  Read why they are endangered and what is being done to help them here.

We saw these wallabies at Cape Range NP, near Exmouth WA which is one of the best places to see them. Others of their kind live in the deep Outback near Alice Springs, NT (called Warru), in the west Kimberley (West Kimberley Rock-wallaby) and on cool islands in southern Western Australia (Recherche Rock-wallaby P. lateralis hacketti). 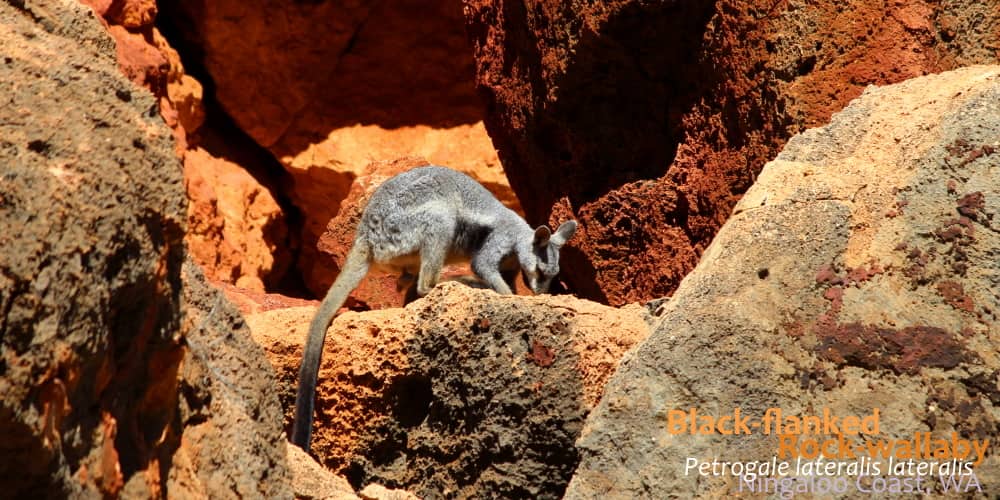 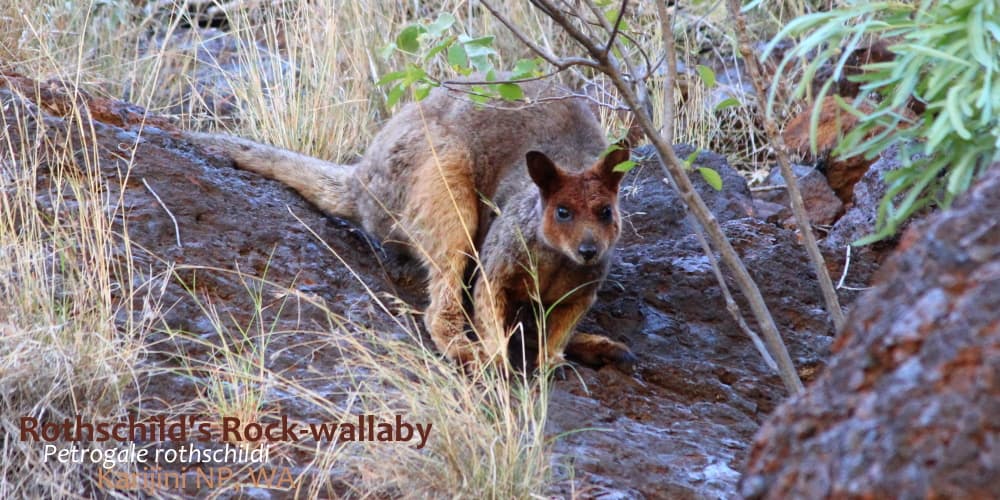 These special rock-wallabies have been gilded with red ochre.

Rothschilds are coloured as if the rocks of Karijini have rubbed off on them: red ochre face and head, sandstone yellow arms and legs and grey-granite back.

They are quite fluffy-looking, like a woolly bear. Probably their thick fur protects them from knocks and scratches, and helps them stay warm on very cold desert nights.

We saw this female in Karijini National Park, in the heart of their endemic range in the Pilbara, Western Australia. We were lucky – normally they are only seen at dusk and dawn.

Rothschild’s are the largest of these four uber-cool rock-wallabies. 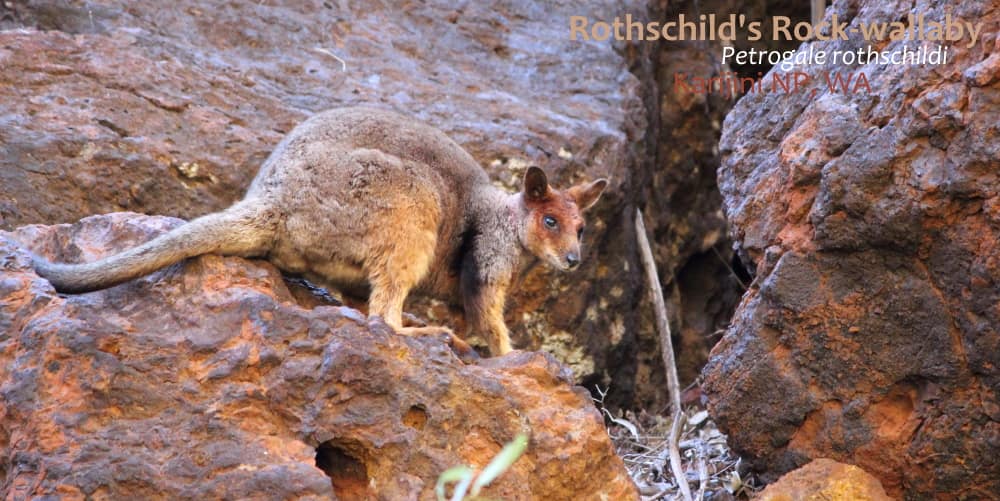 We have been fortunate to see all four of these cool rock-wallabies on our Maximum Wildlife tours over the past year. Contact us if you’d like to see them. 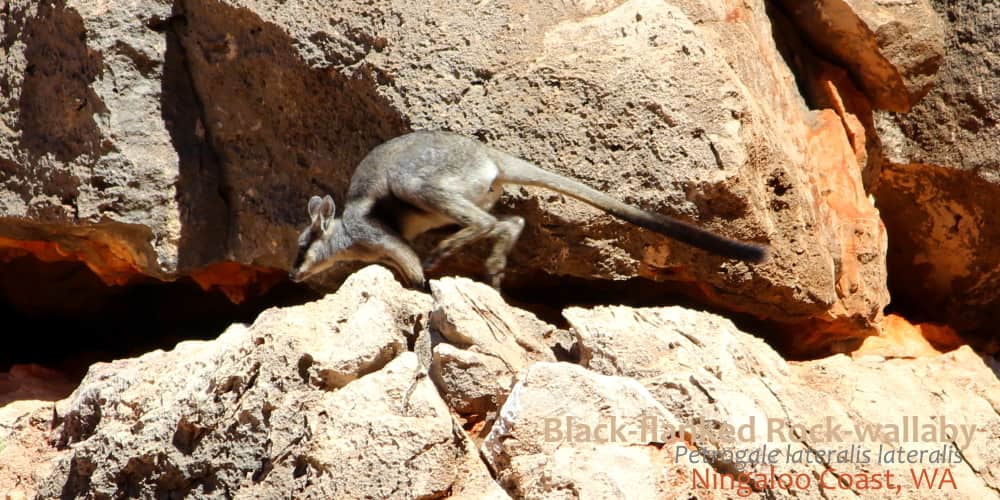