Where to see Butterflies in Southern Australia. 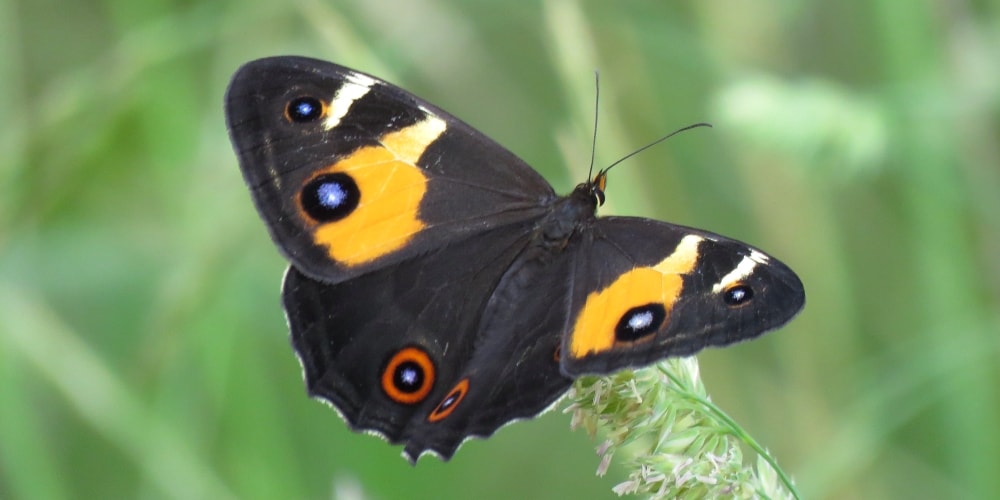 Australia’s butterflies are beautiful and interesting.  Almost half of the 416+ butterflies found in Australia are endemic – ie. they live nowhere else (1).  But where and when is best to see butterflies in southern Australia?

The best places to see butterflies in southern Australia are where there are large areas of rainforest. 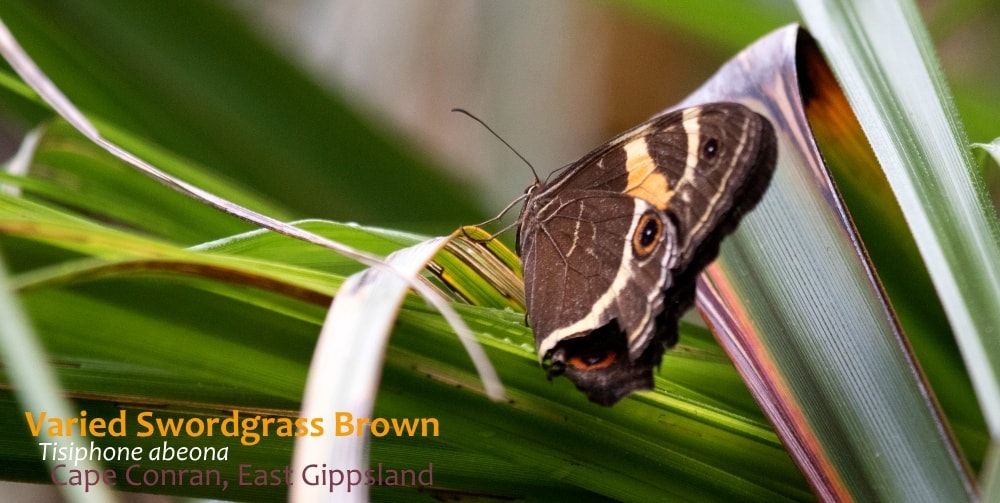 Around Melbourne and Victoria, the best place to see butterflies is East Gippsland.  East Gippsland has a high diversity of butterflies: over 75 species are recorded in the area (2).  This is over half of Victoria’s total species (3), in just 9% of the land area.

Here is a short list of the butterflies we regularly see and photograph on the Wildlife Journey and Maximum Wildlife tours in East Gippsland:

Some of our most frequently-seen and showy butterflies. They tend to be fairly large, and their habit of flying in the sunshine and resting with wings open make them obvious. Most species have some orange or brown in wings. Many have eye-spots (ocelli) in the wings which helps identification. Antennae close together at base. 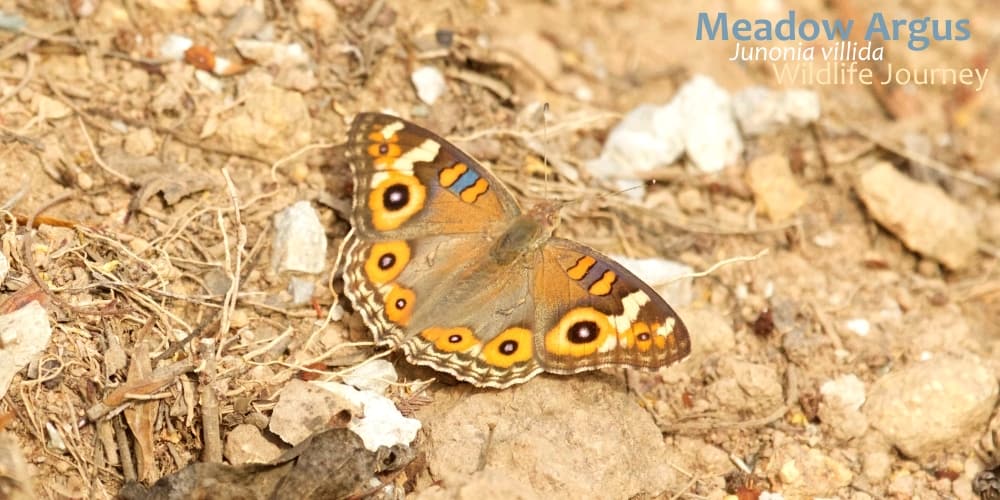 Junonia villida
A beautiful butterfly with a surprising blue patch on the upper wing. They like to bask on the ground with wings outspread, making for great photographs. 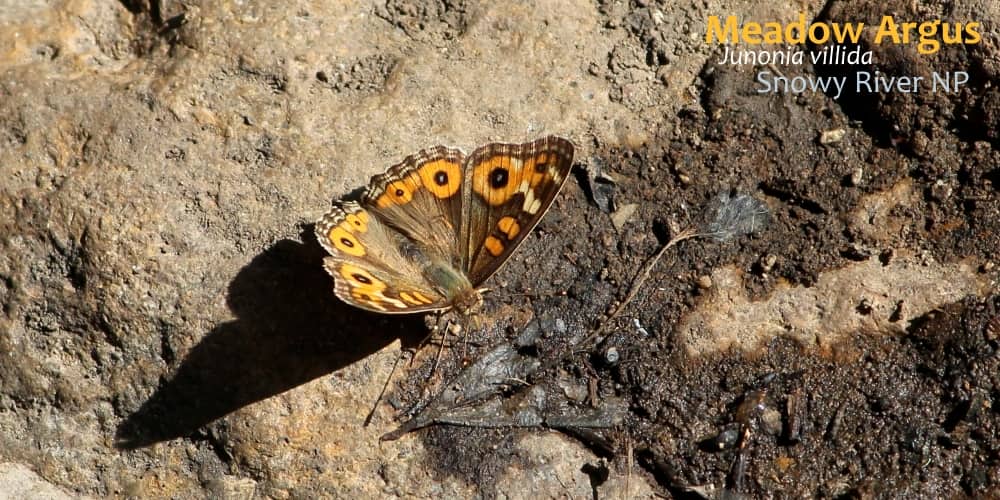 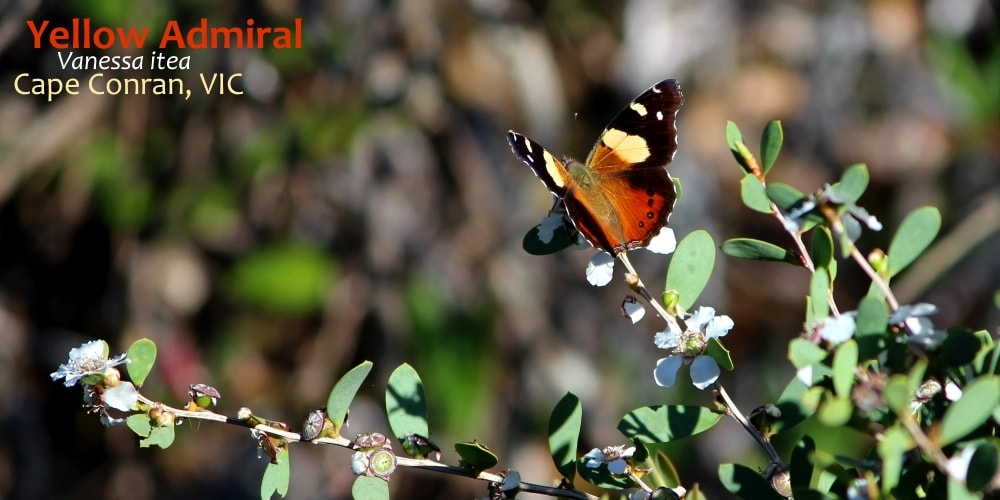 Vanessa itea
A gorgeous richly-coloured butterfly, with orange yellow and black upperwings.  These butterflies fly quickly and perch often. Males establish territories by perching with wings open in the sun. 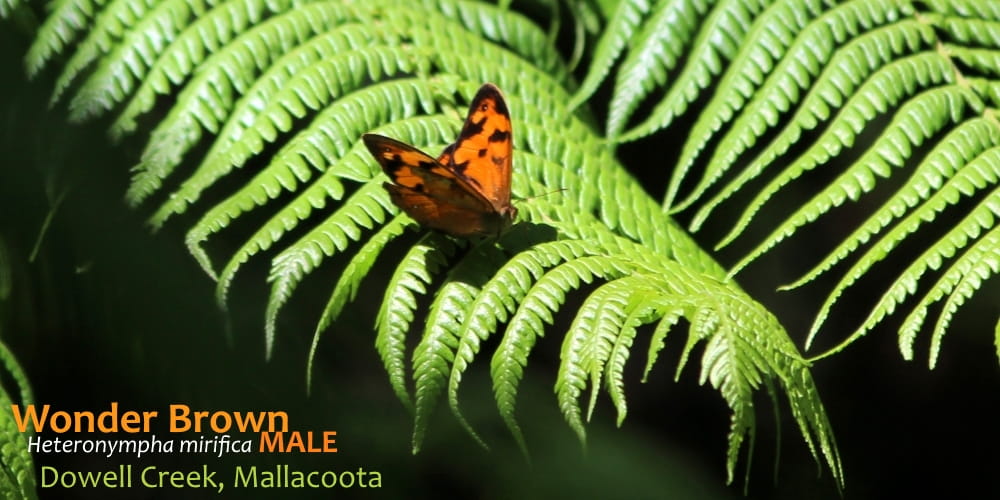 Males are a striking bright red-orange butterfly with little black on wings. Females are large, black & white. Males fly quite high and perch 6-7m above ground. Females can sometimes be seen resting in the shade on the ground in summer. 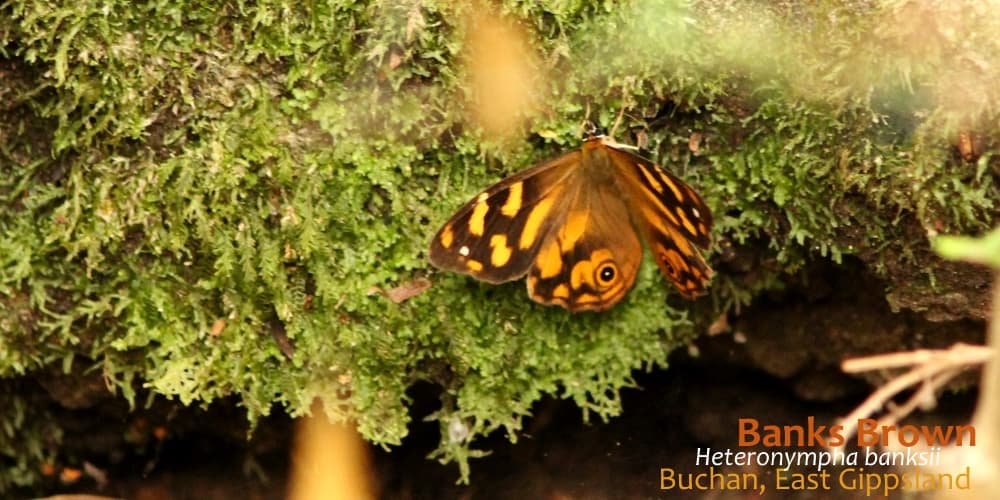 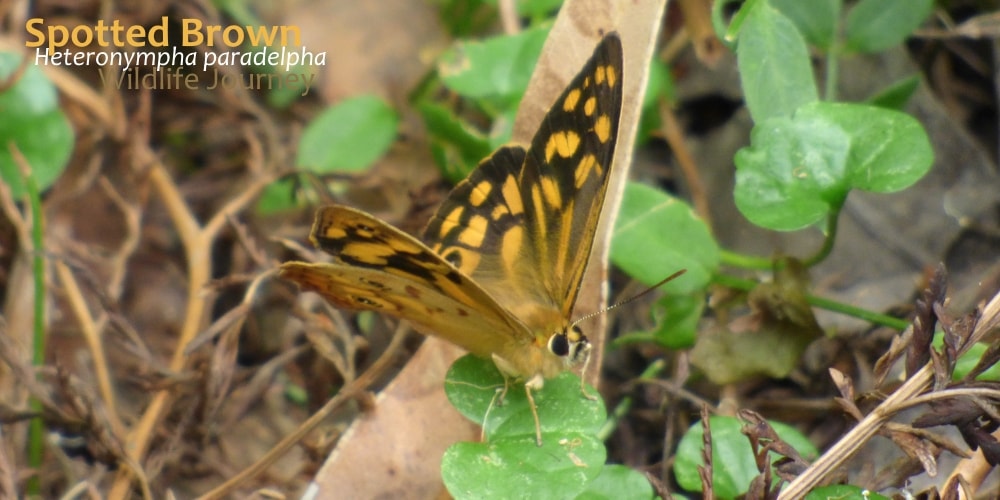 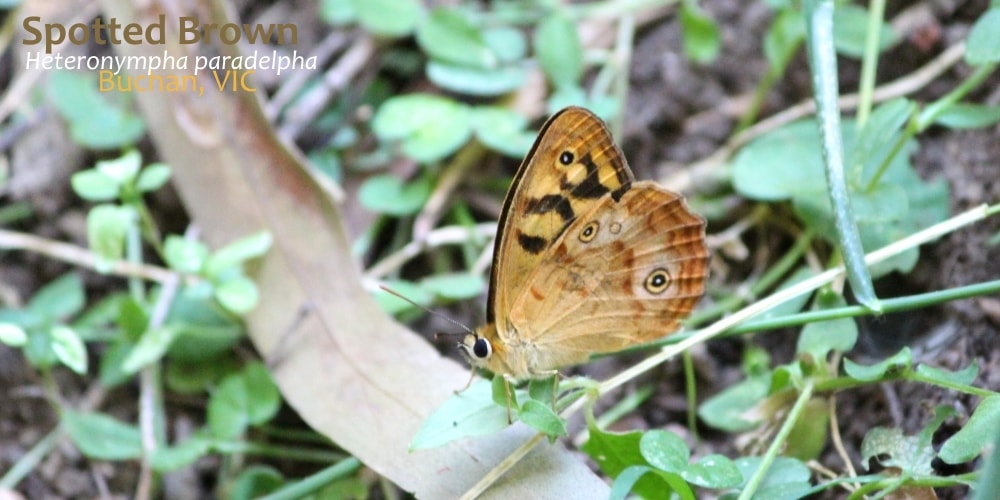 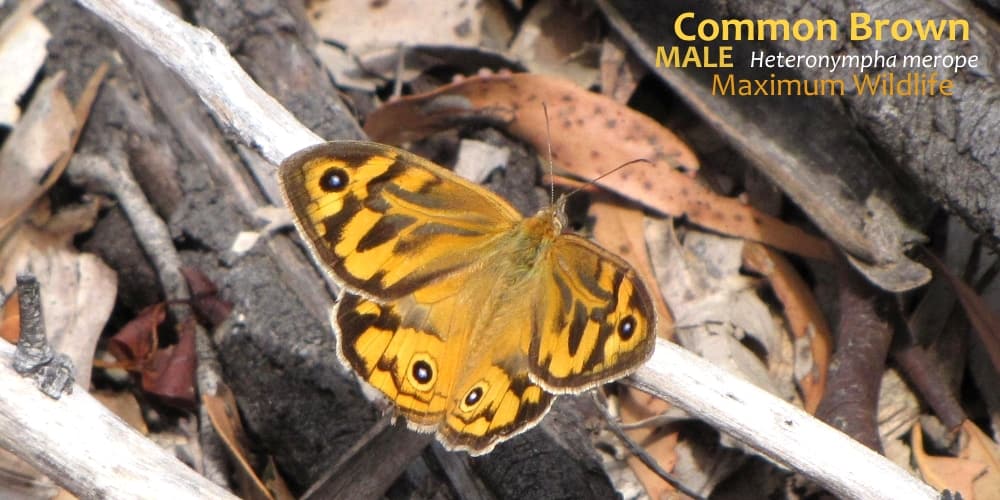 Females large, showy. Males smaller and easier to confuse with other browns, but the single, small eyespot in each wing is helpful. They fly low and slow, and can be very numerous at times. 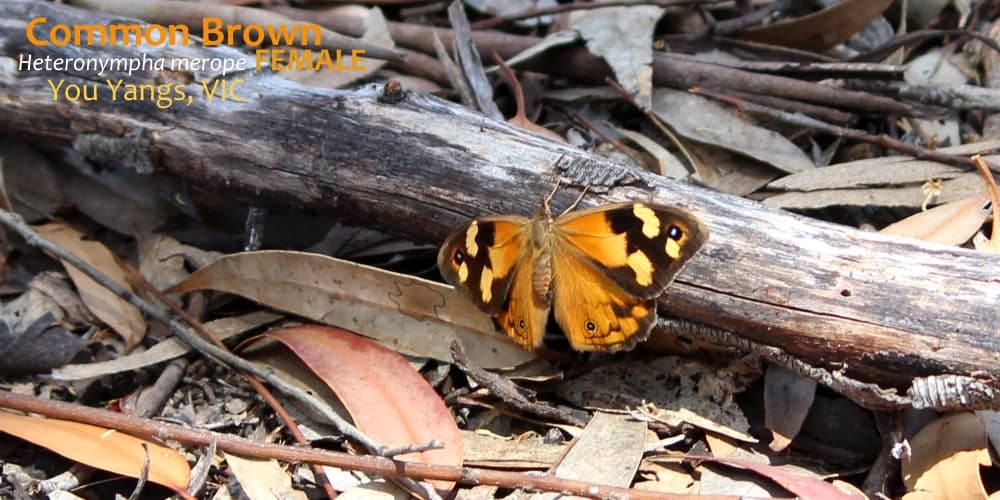 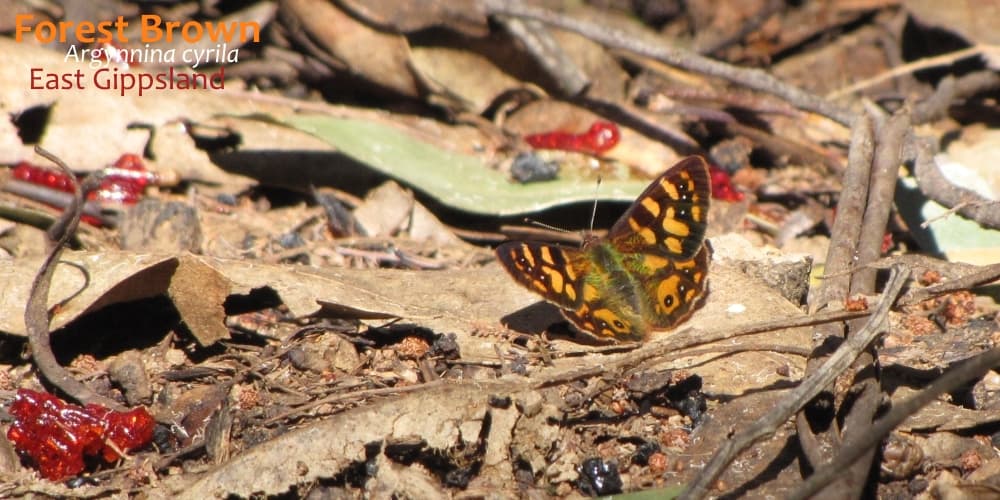 Argynnina cyrila
These butterflies often seem to have a green sheen on the top of their body.  They fly quickly and erraticly. Males are active in afternoon and can fly quite high. Females fly close to the ground. 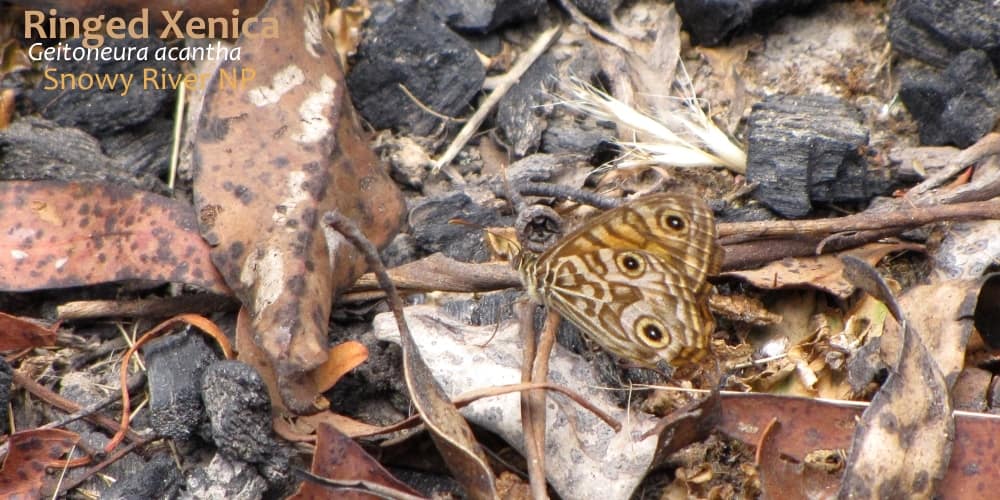 Geitoneura acantha
One of few butterflies that is prettier on the underside: a striking pattern of large eyespots and lines. 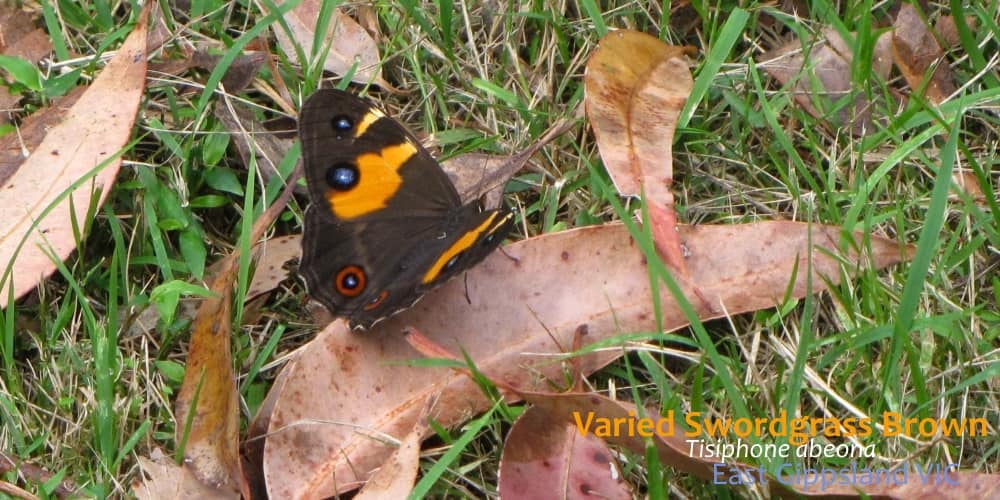 Tisiphone abeona albifascia
One the easiest butterflies to see and photograph in East Gippsland – they fly slowly and gracefully, and perch prominently with wings open.  They are quite big, and numerous throughout East Gippsland.

Medium-sized butterflies with no eyespots in wings. Most have some white or yellow in wings. Antennae close together at base. 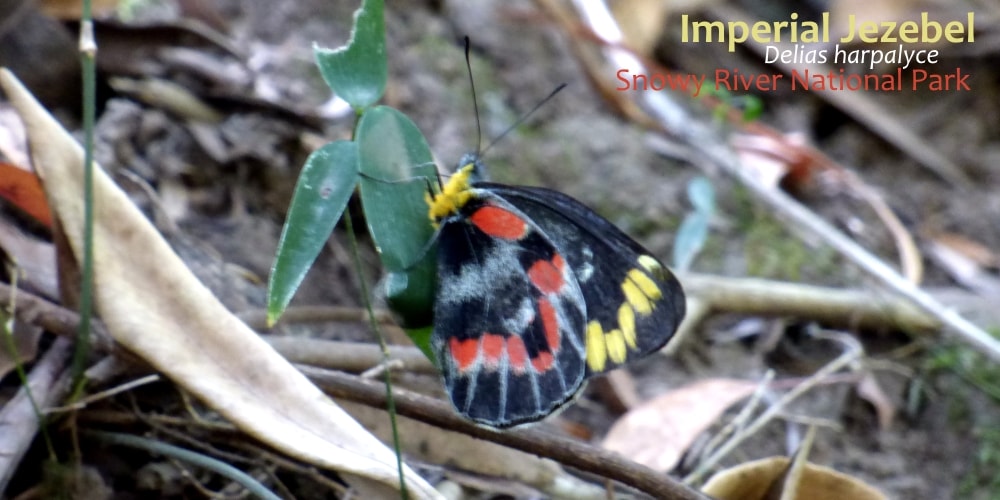 Delias harpalyce
A striking black, yellow and red butterfly that is quite big. Often we see several together in the tops of eucalyptus trees – where the caterpillar’s favourite plant, mistletoe, grows.

Small to medium-sized butterflies with a long stout abdomen (they tend to look like chubby, short-winged butterflies). Wings usually have drab brown or orange tones. Antennae widely separated at base. 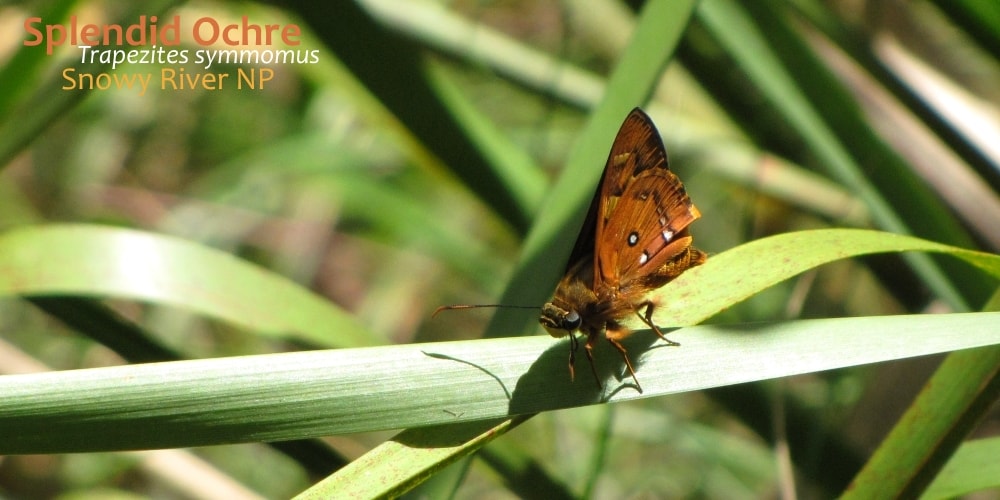 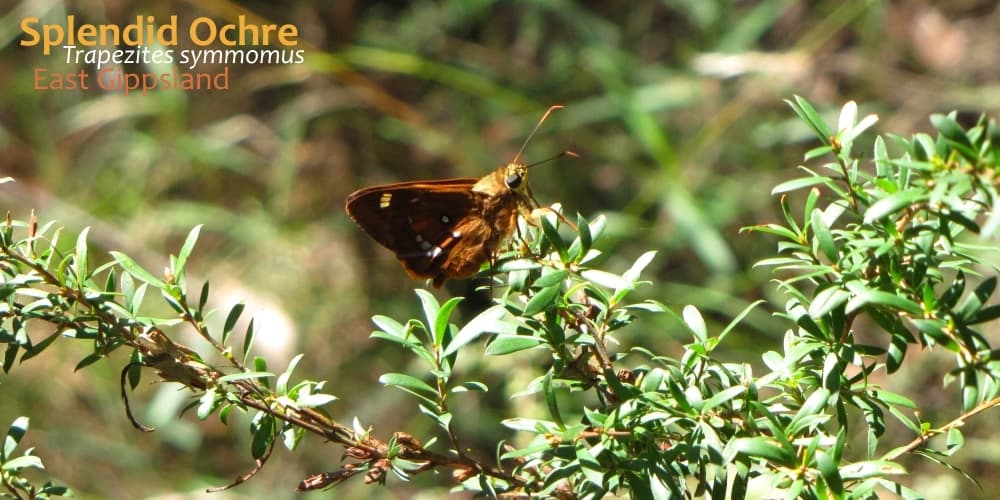 We see many other types of butterfly in East Gippsland in southern Australia, but these are just a few of our best photographs.  There’s a more complete record on iNaturalist – click picture below: 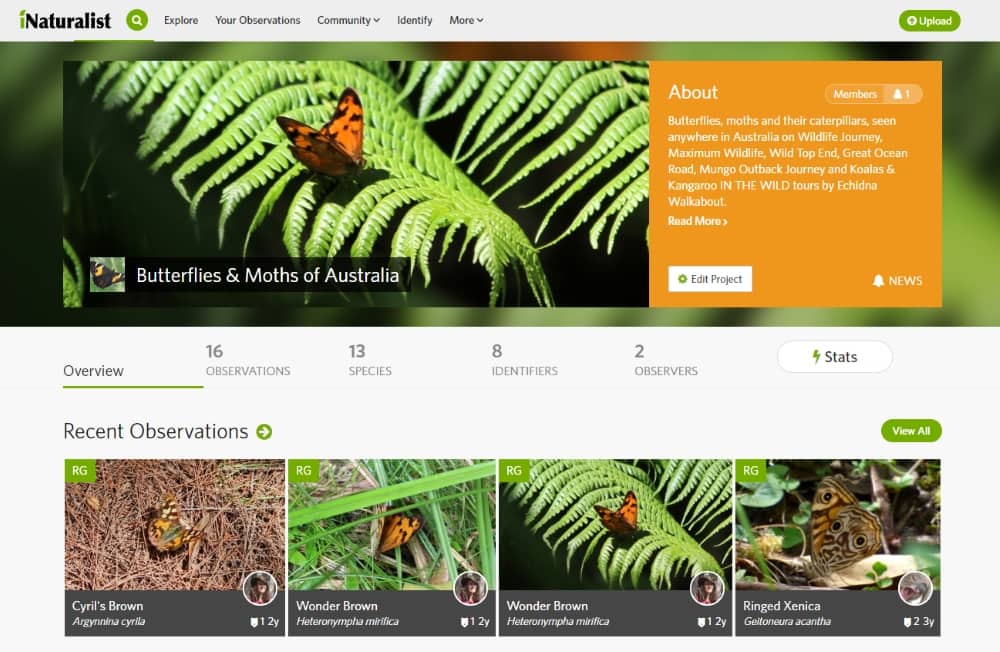 If you are keen to see and photograph Australian butterflies, travel on the Wildlife Journey in February or March, or in October or November.  Those are also great times to see lizards!  Read about one of our favourite lizards here. 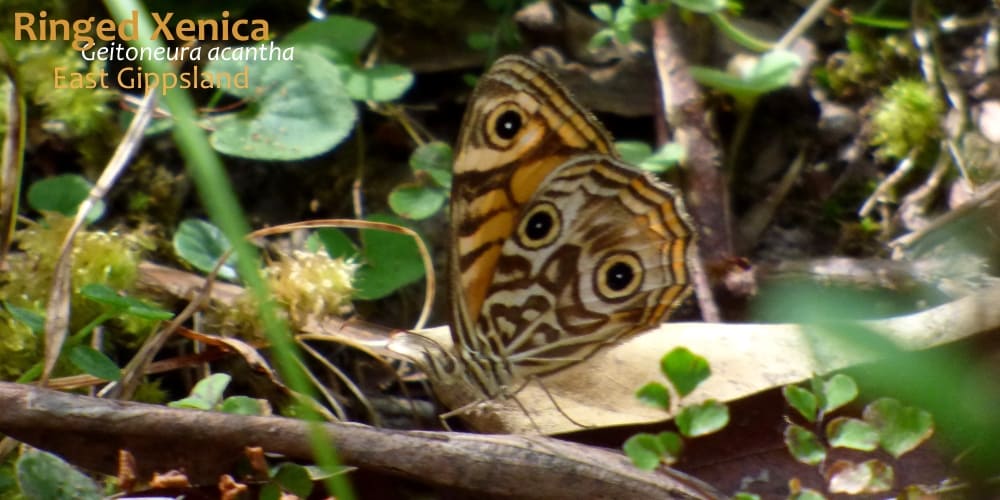 For really complete information on all of the butterflies of Australia go to this excellent site Lepidoptera Butterfly House: http://lepidoptera.butterflyhouse.com.au/imagos.html