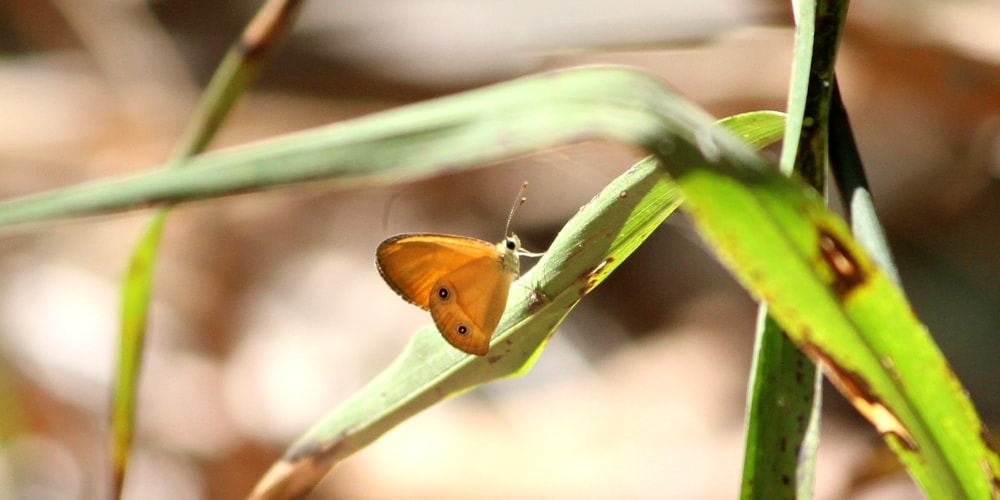 When I first wrote about the butterflies of the Northern Territory I was in the early stages of learning about these magnificent creatures. Back then, I only saw a few of the hundreds of species of butterflies present in the Top End. That first article opened my eyes, and now I see a butterfly everywhere I go.

How to learn about butterflies.

Learning about butterflies – at least for me – started with photographs. Without a photograph it is very hard to remember the tiny details of the spots, lines and colours of a butterfly. There are many similar species, and at first you don’t know what features to look for. But keep at it – you’ll soon start to recognise a few common species on sight, without the photograph. Then when you see one that’s different you’ll know straight away.

Have a look at all the butterflies we saw on 2019 Northern Territory trips here on iNaturalist: https://www.inaturalist.org/projects/top-end-2019-invertebrates

The Nymphs are a large group of elegant, long-winged butterflies patterned in orange, black and brown. A few have some blue on their wings. Most have white and blue reflective eye-spots (ocelli) in their wings that are very helpful for identification – in fact if a butterfly has prominent eye-spots it is probably a nymph*.

Read why scientists believe that butterflies have eye-spots.

These butterflies are usually pretty large and quite showy, so they tend to be the ones most photographed.

*Note: some Blues also have eyespots, but they tend to be a simple black spot surrounded by orange, and are less prominent than the nymphs’.

This Northern Territory butterfly is seen very frequently in most of the habitats we visit. 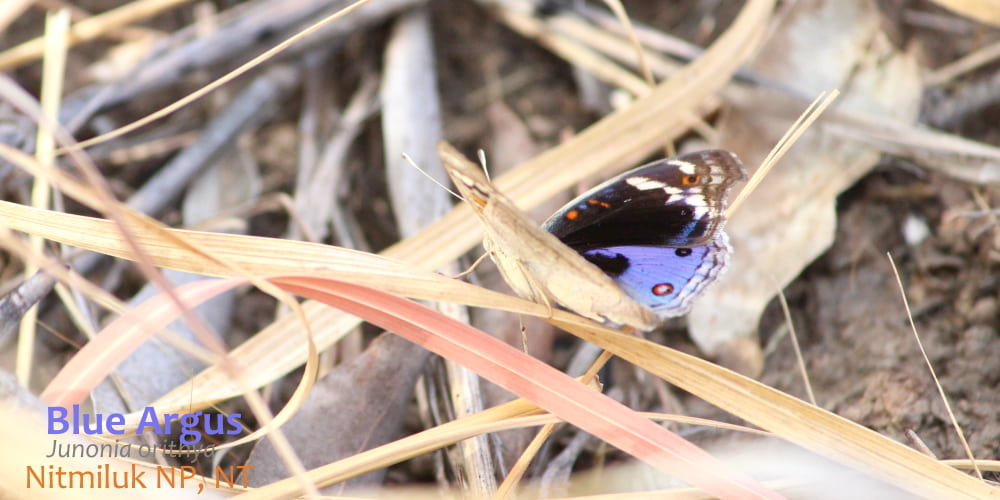 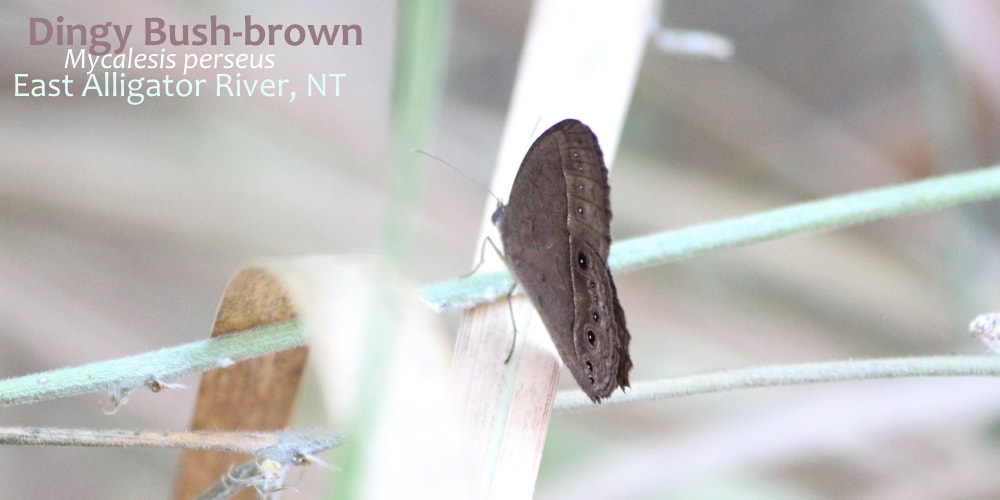 A common, often-seen butterfly. The name is a bit unfair – they are delicately lovely.  The wet season form is a bit more showy than this dry season version. 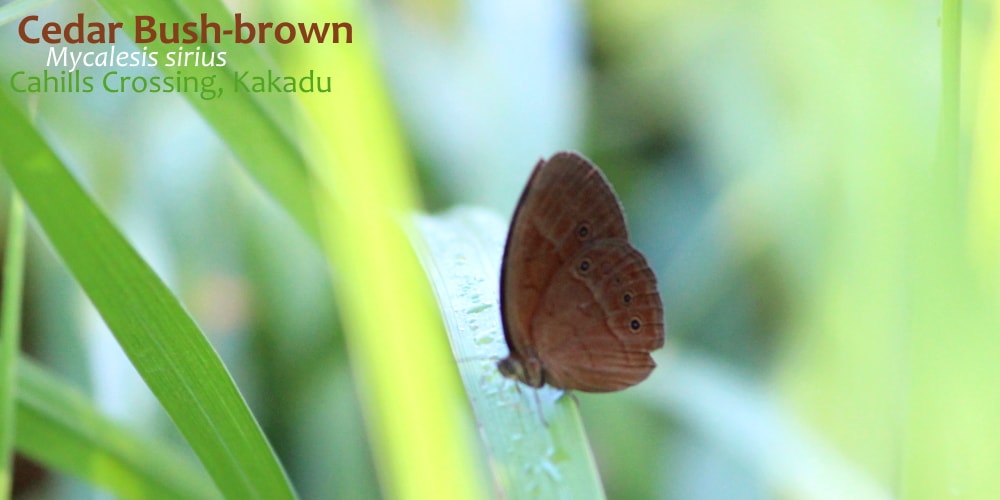 Seen less often than the Dingy Bush-brown, this butterfly is much richer red in colour.

Usually smaller than nymphs, but often so beautiful that they catch the eye. Many blues have a blue or purple upperwing, and a brown camouflaged underwing. A few are white, yellow, black & brown and could pass for Pieridae (Whites-Yellows), but some have a tailed or tasseled edge to their lower/hind wing (tornus) – which Australian Pieridae never have. A few have brown & orange wings and look superficially like nymphs, but with no eyespots.

Basically, if a butterfly can’t be found in the first, most obvious group, look for it in the Blues.

Unfortunately I couldn’t capture the lovely upperwing colour of this butterfly. 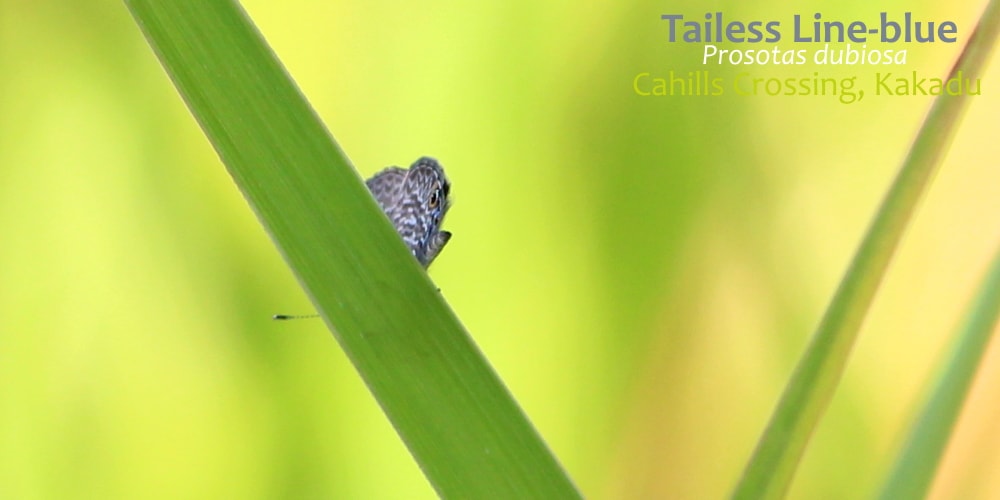 This butterfly was so tiny it hid behind a blade of grass, but its beautiful purple-blue upperwing had caught my eye.

Some blues are very tiny and difficult to identify, like this little beauty. 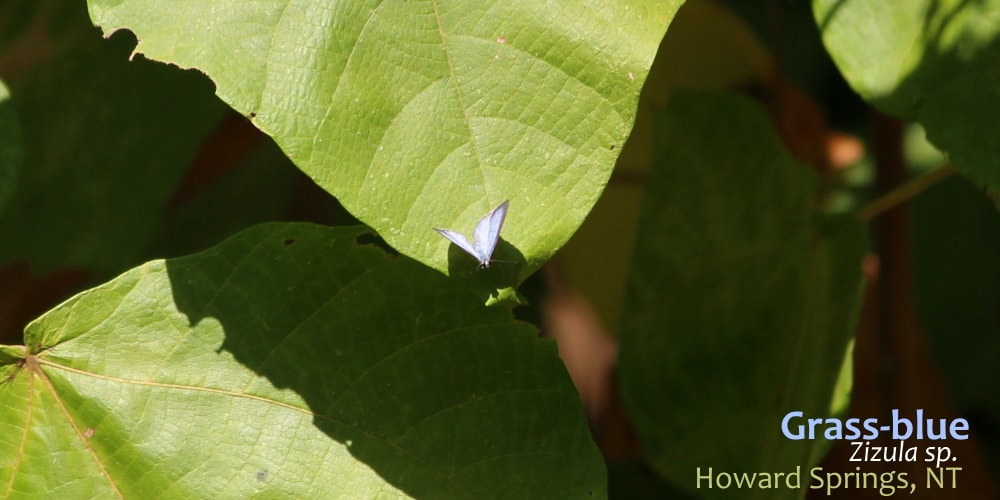 Mostly small or medium-sized Northern Territory butterflies, predominantly white or yellow, many with black or brown edging to their wings. A few have splashes of red.

Grass-yellows are very common in the Northern Territory Top End. They are noticeable because they fly close to the ground in most of the habitats we visit. Jezebels are large and showy and we often find them when we are looking for honeyeater birds in the canopies of flowering trees. 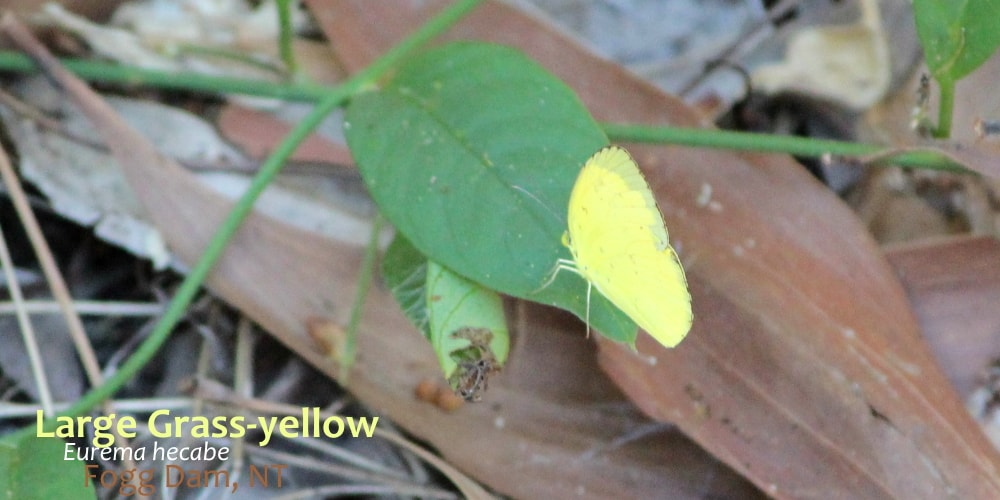 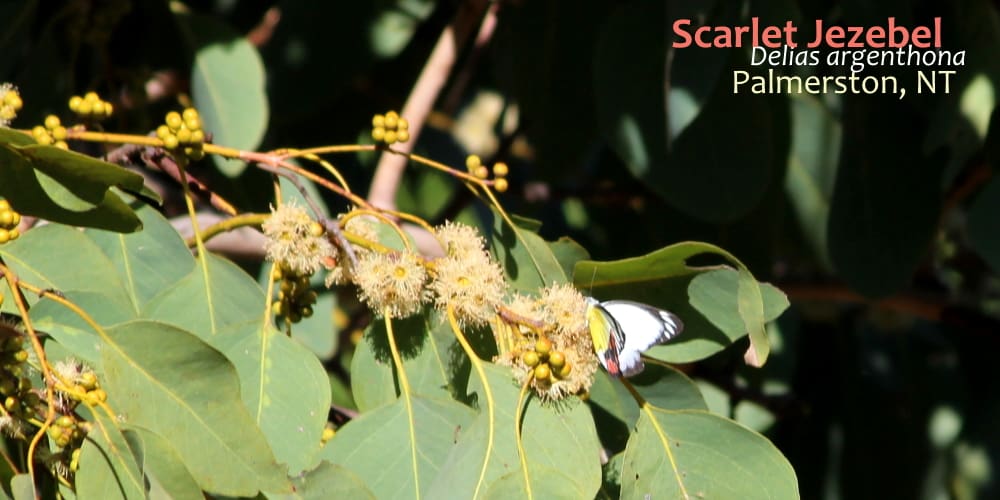 We also love to see Dragonflies in the Top End – read more here.

Excellent comprehensive information on all Australian butterflies and their caterpillars here: http://lepidoptera.butterflyhouse.com.au/