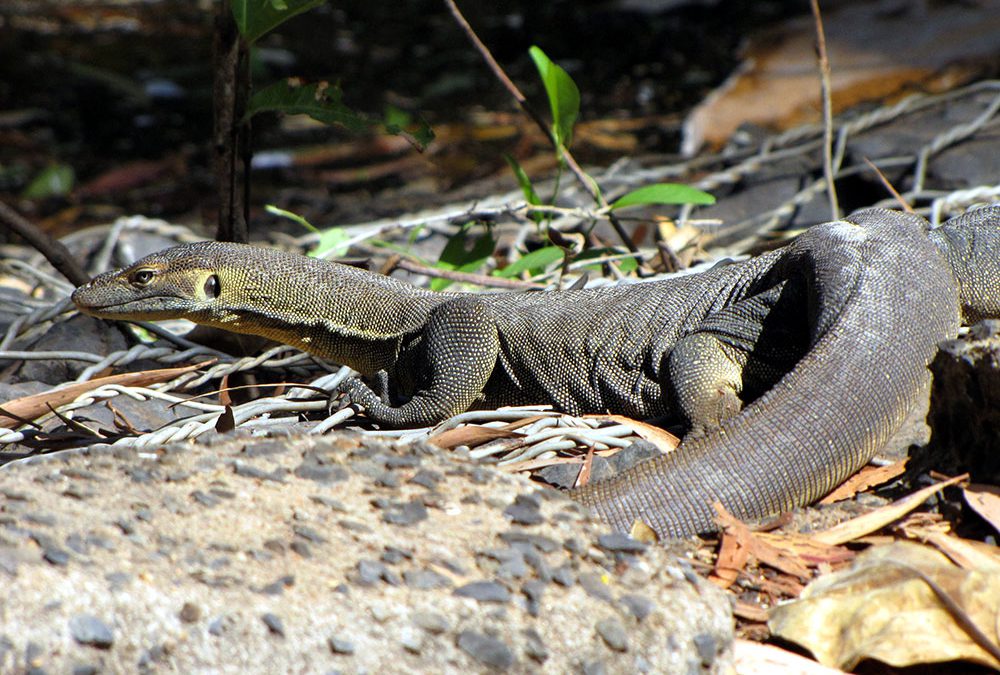 Australia has its share of megafauna, but we Aussies sometimes make the mistake of overlooking our big natives.

On a steamy, sizzling hot January day in far East Gippsland I took a mixed group of nature photography & wildlife biology students walking in Croajingolong National Park, near Mallacoota. It was funny trying to keep them together – the wildlife students would stand for ten minutes identifying every small bird and lizard we came across, while the photography students yawned and fiddled with their camera settings. Minutes later, the photography students would be in raptures over a rock formation, snapping from strange positions, then comparing histograms – while the wildlife students wandered off in search of obscure insects.

But one sight kept them all fascinated for twenty minutes. It was a goanna (Lace Monitor), and a big one – 2 metres long.

Single-minded, she swaggered out of the mat rush, crossing our path with only a glance in our direction. From her straight path and speed we could tell she was on a scent and getting close. None of us could smell anything, but a human’s sense of smell is embarassingly poor and anyway, we don’t have Jacobson’s organs*.

She was close to her quarry, and seized it moments later. It didn’t fight back. In fact, it hadn’t moved for weeks. A very large, long-dead, dessicated Flathead fish was her dinner and our highlight of the day.

Monitor Lizards, of which the eastern Australian goanna, or Lace Monitor, is a member, can eat anything. If its meat and its immobile, a goanna will eat it. If its meat and can be caught, a goanna will eat it. If you’re an egg, or a baby bird unable to fly, just hope that no goannas come by. You can’t hide from an indestructible, patient predator with a sense of smell that makes every bloodhound look like they have a head cold.

Our goanna wrapped her jaws around the flathead and tossed it around until she could get a good angle. Head first she started to swallow it whole. Gulp, gulp, slowly, almost painfully she eased the stiff old fish into her throat, like a sword-swallower. You could see the outline of the fish inside her chest. Ouch!

The photographers went wild! The shutter-clicks were like distant machine gun fire. The wildlife students watched in awe, no binoculars necessary for this close encounter with megafauna. You can hear their hushed excitement on this video: (video to come)

After swallowing her meal, she climbed slowly onto a fallen tree, eased her belly down, relaxed her legs, laid her chin on the tree and snoozed. Not even a hammock and a cocktail could have made her happier. She was one blissful reptile.

Keep an eye out for the megafauna in the wilder parts of Australia – goannas live everywhere in Australia except for the cities and built-up areas (and the island of Tasmania). They are most active when temperatures are warm but not too hot (20C – 30C). We often see them on our 4 day Wildlife Journey to East Gippsland (where this story occurred) and occasionally on our Mungo Outback Journey and Wild Top End trips.