Over 27 years researching wild koalas we have noticed that some human behaviour causes koalas to respond negatively.  So, back in 2006 we formulated this Sustainable Wild Koala Watching Code:

1. Never touch the tree a koala is sitting in,

2. Maintain a distance of 10 metres (horizontal) from any wild koala,

3. Do not surround a koala’s tree,

5. Do not try to get the animal’s attention by making noises.

1. Never touch the tree a koala is sitting in.

Why? We have noticed that a sleeping koala will look up if their tree is touched, even when they are high and the tree is touched quite gently.  We believe that the tree itself is that koala’s personal space for the day, and touching it is a form of trespass.  Also, two of the koala’s few predators – man and goannas – would have climbed to reach a koala, so anything large touching their tree should provoke a reaction.

2. Maintain a distance of 10 metres (horizontal) from any wild koala.

Why? Even without touching the tree, a wild koala can become distressed if humans approach too close.  Unhabituated koalas often wake up, become very rigid and will sometimes climb higher when humans approach.  So we have formulated this rule as a basic safe and respectful distance.

Interestingly, a recent scientific study (1) has found that captive koalas subjected to people at close proximity (5 metres) do experience higher levels of stress than when the people are further away.  Wild koalas are likely to be even more sensitive, so our self-imposed 10 metre limit is justified.

3. Do not surround a koala’s tree.

Why? Very nervous koalas will often move their body so the tree is between you and them.  It may be a form of protection.  If people are in all directions, the koala finds this very difficult to achieve.  Less nervous koalas will still look in the direction of the humans on the ground, and if those humans are in all directions the koala keeps looking from side to side.  For an animal on a low-energy diet, this vigilance is a waste of their precious resources.

Why? As mentioned in the point above, a nervous koala will move their body away from a human.  We have also noticed that if a large group of humans stays still in one location and one human walks to the other side of the tree, the koala will move away to avoid the moving human.  It may be partly the noise – though in the case mentioned, the stationary humans continued to talk – or it may be the movement.

5. Do not try to get the animal’s attention by making noises.

Why? This is so tempting, and people do it a lot.  It may work, once or twice.  But how many times has that happened to that koala?  And each time it doesn’t work, does someone make a louder noise?  Or shake the tree, or throw something at the “unco-operative” koala?  This is totally unacceptable of course, but it starts with a small disturbance and builds.

All Echidna Walkabout wildlife tours are conducted in compliance with this code.

Meet some of the wild koalas in our Wild Koala Research Project here.

About our Wild Koala Research. For us, visiting the same koalas on a regular basis, we have to develop a positive, or at least benign, relationship with these koalas.  So we try to avoid disturbing the koala any more than necessary.  It is also just simply good animal welfare practice, which is important to us as a Social Enterprise with a mission to conserve wild animals.

Sadly, we have recently heard of some disgusting human behaviour towards wild koalas in other areas.  Near Kennett River on the Great Ocean Road tourists have been reported climbing trees to get closer to wild koalas.  In another area, people have been seen throwing sticks and stones to get a koala’s attention.  We once saw a young girl aim a slingshot at a sleeping wild koala in the You Yangs – luckily we were there and could put a stop to it.  At Magnetic Island in Queensland I heard an Australian family threaten to throw something at a koala because he wouldn’t look at them for their photograph.  This may be ignorance rather than intentional cruelty, but it has the same negative effect on the koalas.

Please be vocal against such behaviour. Harassing or harming wildlife is a crime, and the police should be called if the harassment does not cease immediately. 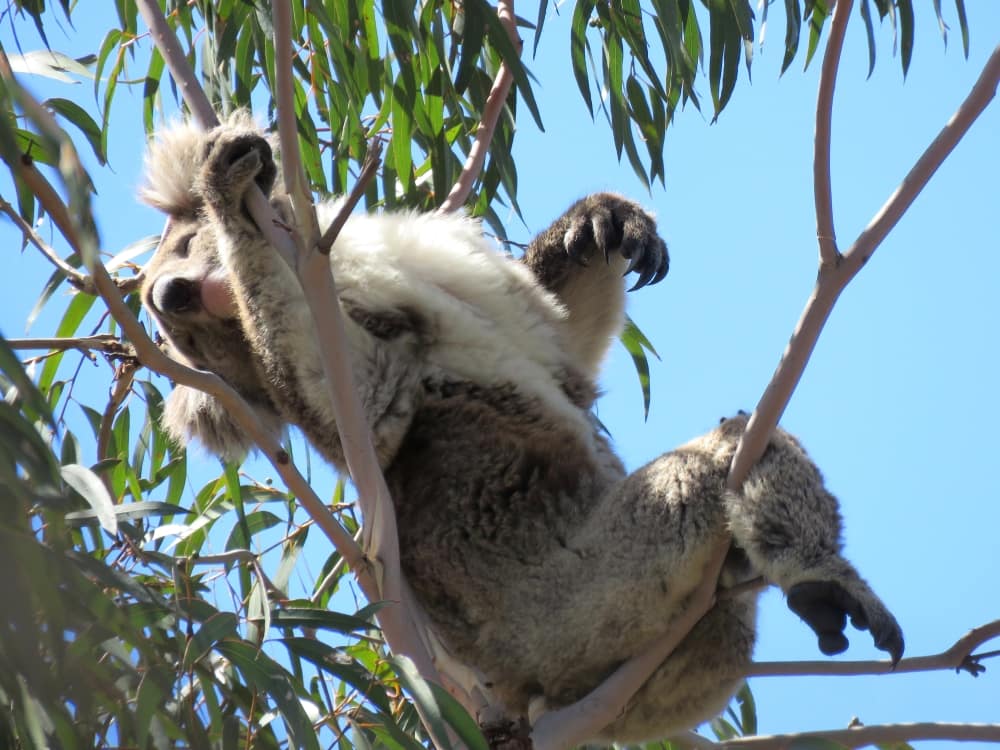